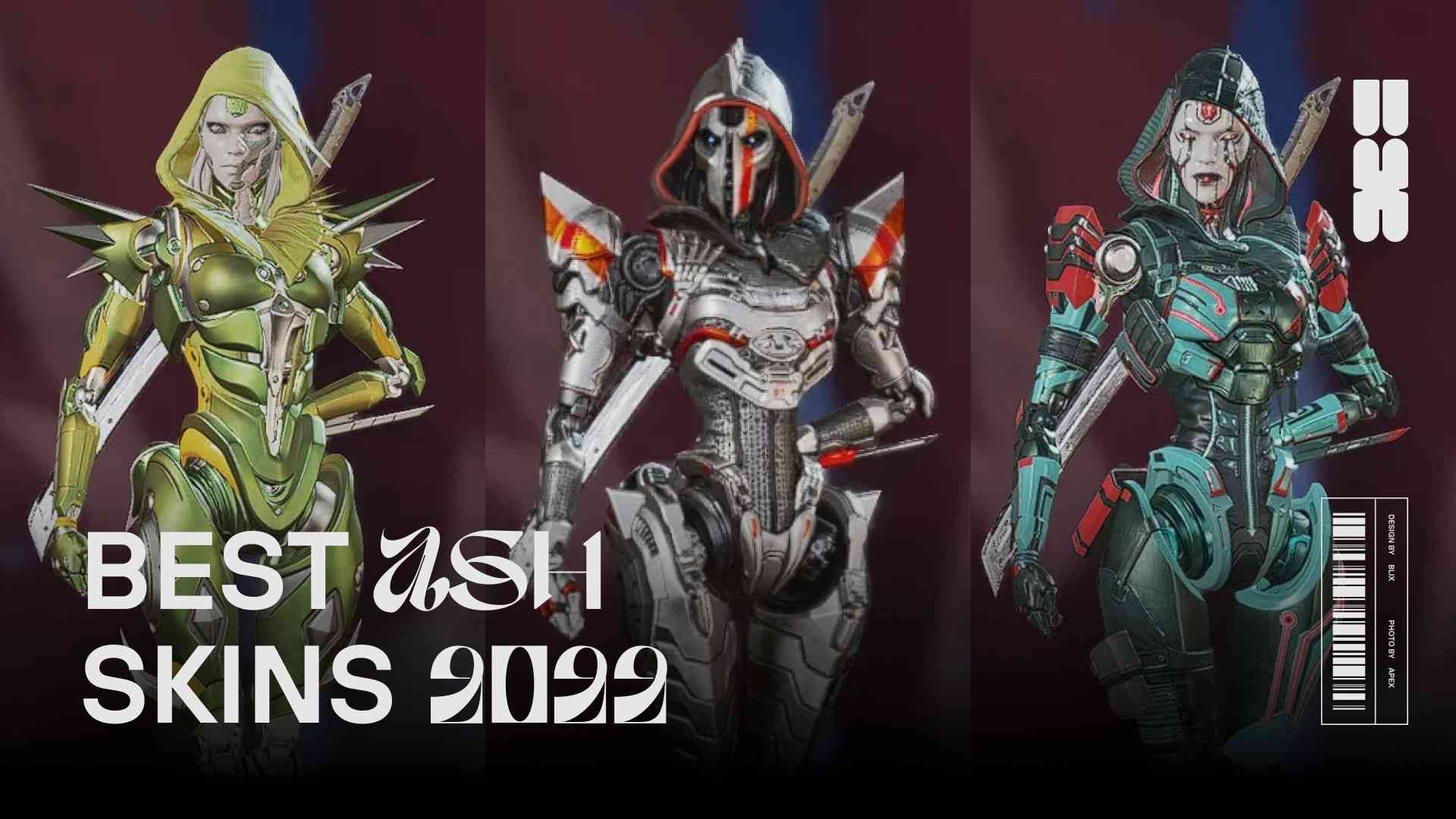 Ash is an Offensive Legend. She was first introduced in Season 11, and players can unlock her with either 12,000 Legend Tokens or 750 Apex Coins.

Ash is a high-precision Legend. Her tactical ability «Arc Snare» throws a device that deals damage and temporarily snares enemies. Her passive ability «Marked for Death» allows her to locate the squad that killed a player by interacting with their Death Box. Her ultimate ability, «Phase Breach», opens a linear one-way portal between two locations.

Currently in Season 12 of Apex Legends, Respawn has released 48 skins for Ash so far. There are 7 Legendary, 9 Epic, 16 Rare, and 16 Common skins for Ash. 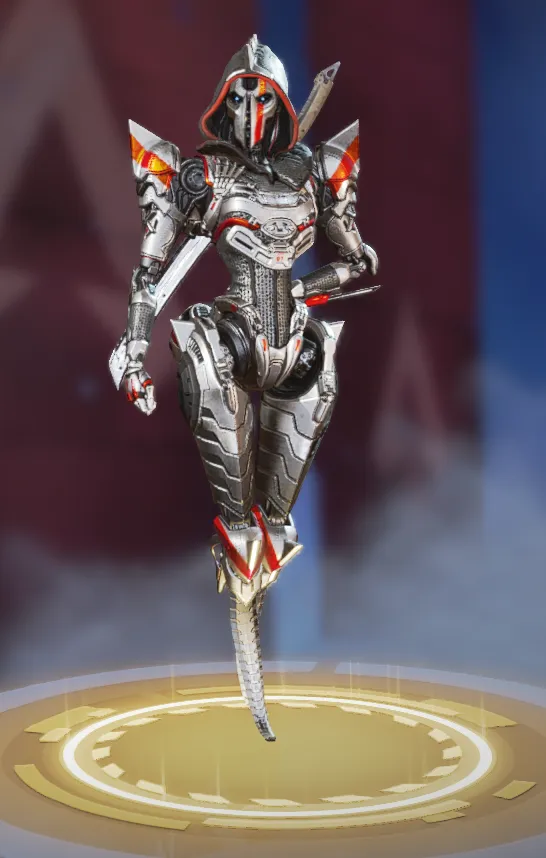 The Fallen Angel and Chaotic Emerald skins for Ash are both based on Ash’s futuristic look by adding some elements that really make her look like a cyberpunk assassin. These skins will definitely be fan-favorites and will probably get some cool recolors in future updates. 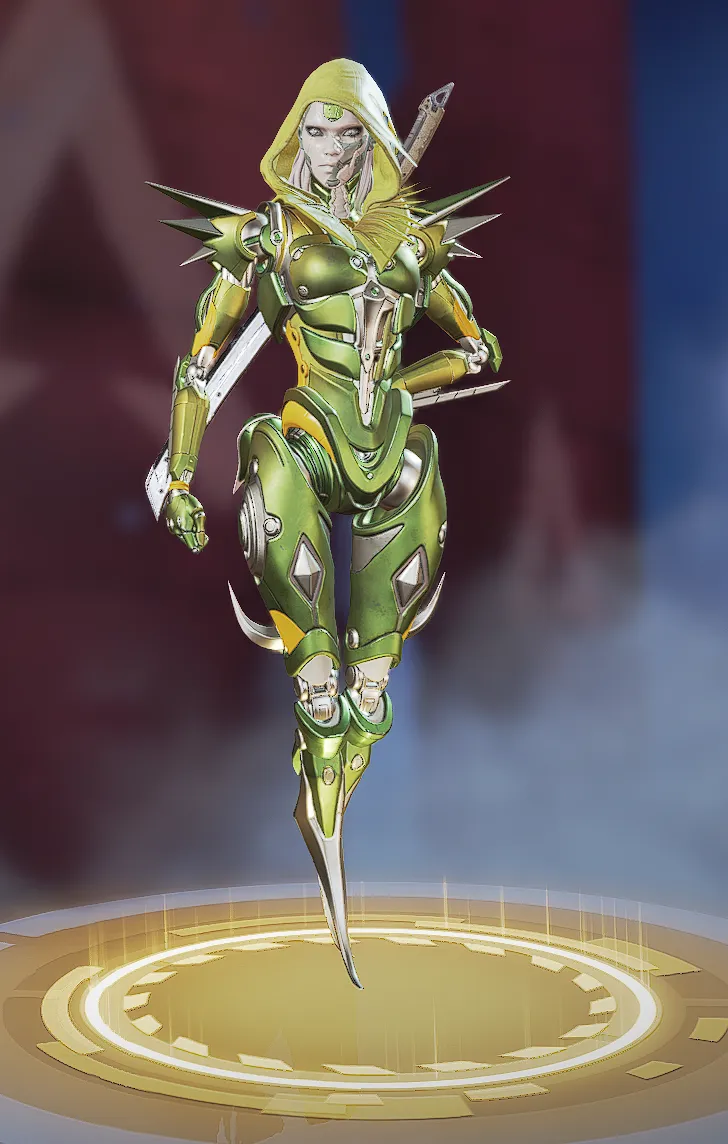 Chaotic Emerald is one of the gorgeous skins for Ash. As the name suggests, the skin is colored with shiny emerald green, making the skin more vibrant. The structure of the skin also makes this skin a work of art.

This skin of Ash isn’t a part of an event and can be craft in the Legends menu for 1,200 Materials. 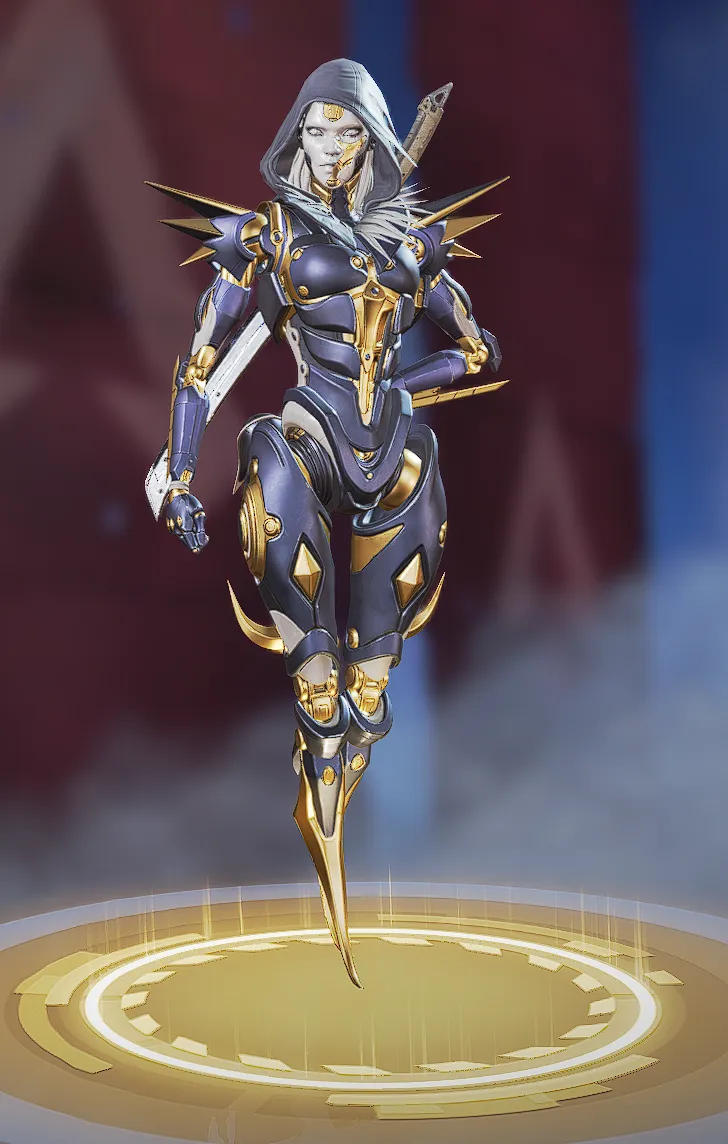 Fallen Angel is a default Legendary skin for Ash that has a similar structure to the Chaotic Emerald Ash skin. However, the shiny dark blue color and golden and white accent on top make this skin a superior version of its counterpart.

Fallen Angel Ash isn’t part of an event and can be craft in the Legends menu for 1,200 Materials.

The Eagle-Eyed and Mercenary Mystique skins embrace Ash's inner killer, dressing her as a hunter with a metal skull on one shoulder. These skins have a feathered hood and give Ash black and white face paint with a bandolier across her chest. The Eagled-Eye skin has a yellow, red, and green color scheme while the Mercenary Mystique skin has a red, black, and brown color scheme. 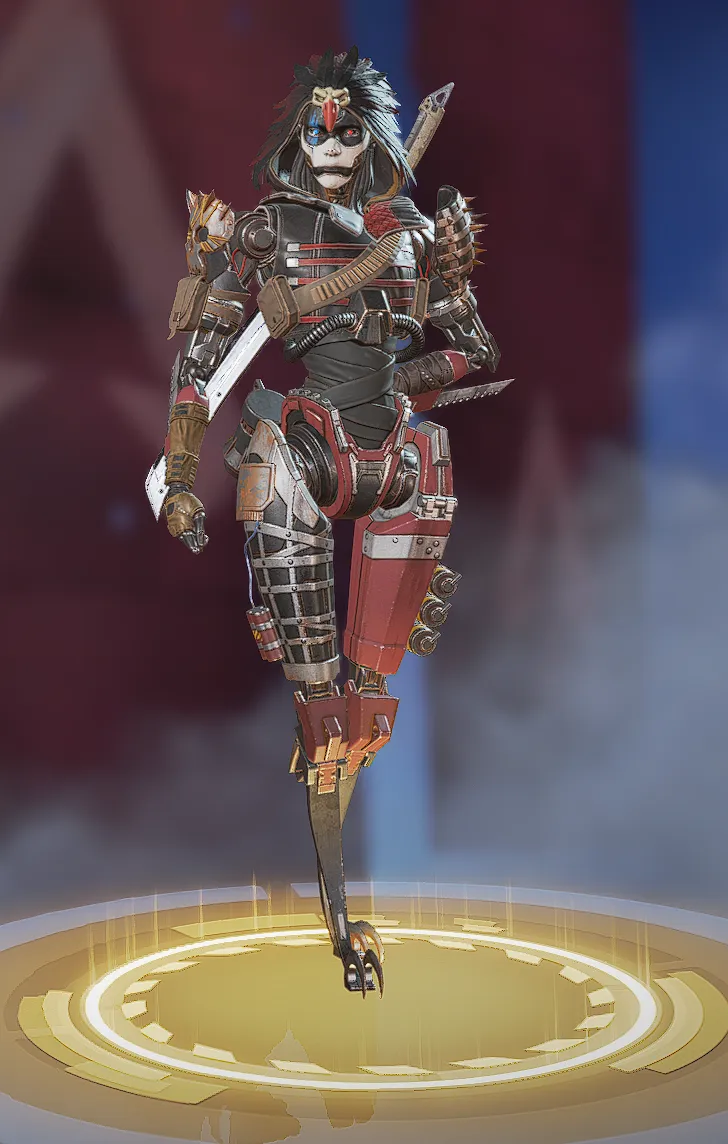 Mercenary Mystique is a Legendary default skin for Ash. Her battle scar metal body with lots of stains and rust give this skin a more rigid look. The eagle on the hood represents her passive which detects her enemies all over the map.

Players can craft Mercenary Mystique Ash in the Legends menu for 1,200 Materials. 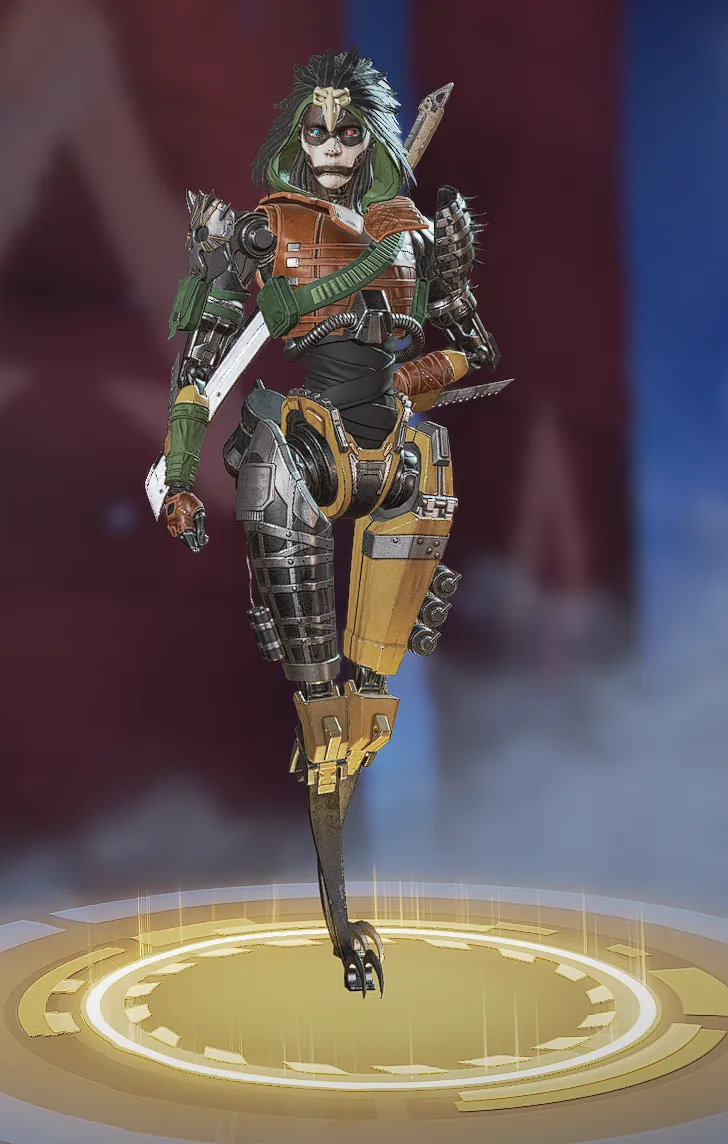 Eagle-Eyed is another Legendary default skin that has similar features to Mercenary Mystique. However, the specific color combination gives this skin a kind of a Robin Hood aesthetic. The Eagle on her hood also implies that she can see everything on the map with her sharp eyes, just like the previous skin.

There's an opportunity to craft Eagle-Eyed Ash in the Legends menu for 1,200 Materials. 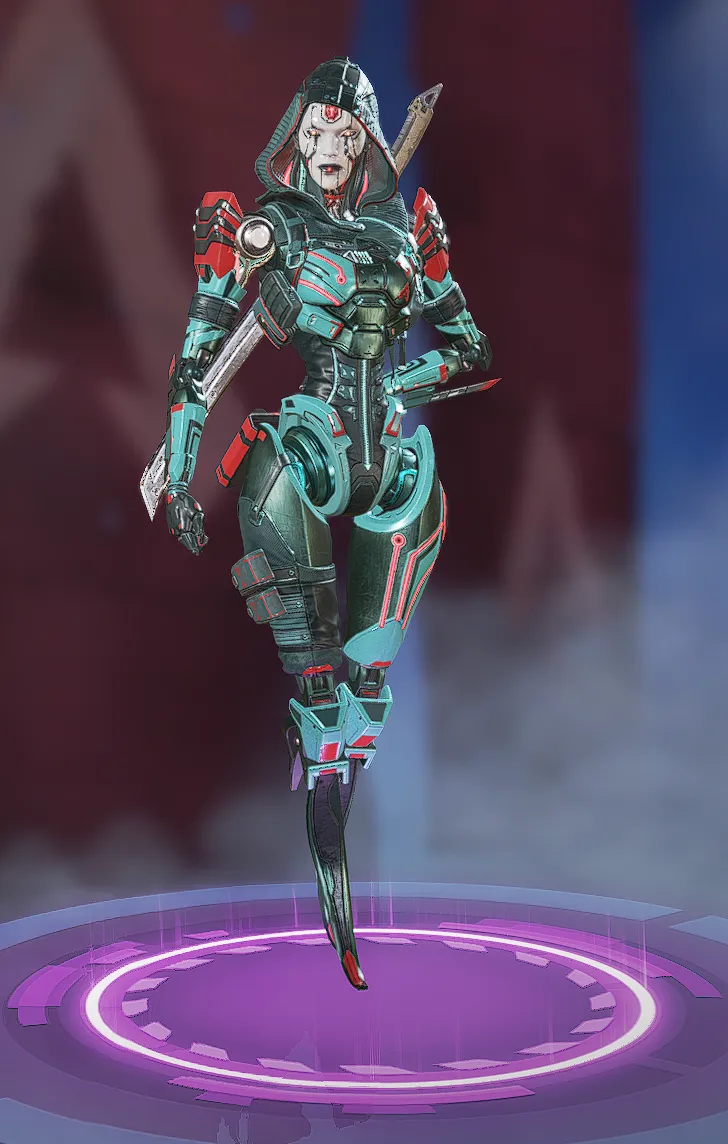 One of the rarest skins for Ash is the Epic Venom Blade skin that shines just as good as Ash’s original character design. The skin isn't much different, aside from changing the actual textures to Ash, but it's not lacking in style.

The colors and lines of the skin design all work incredibly well in tandem with each other, and the extra lines are drawn on Ash’s face, the lips push the skin over the edge from «good» to «great». Glowing red details on her forehead, bottom lip, and legs complete the look and make it truly unique.

It’s one of the hardest Ash skins to find in the game for now. As part of the Prime Gaming Bundle in November, it was free for all players that linked their Twitch account to their Apex account and claimed the free reward. However, it was only available for that month, and the Prime Gaming skins have not returned to the game in the past. 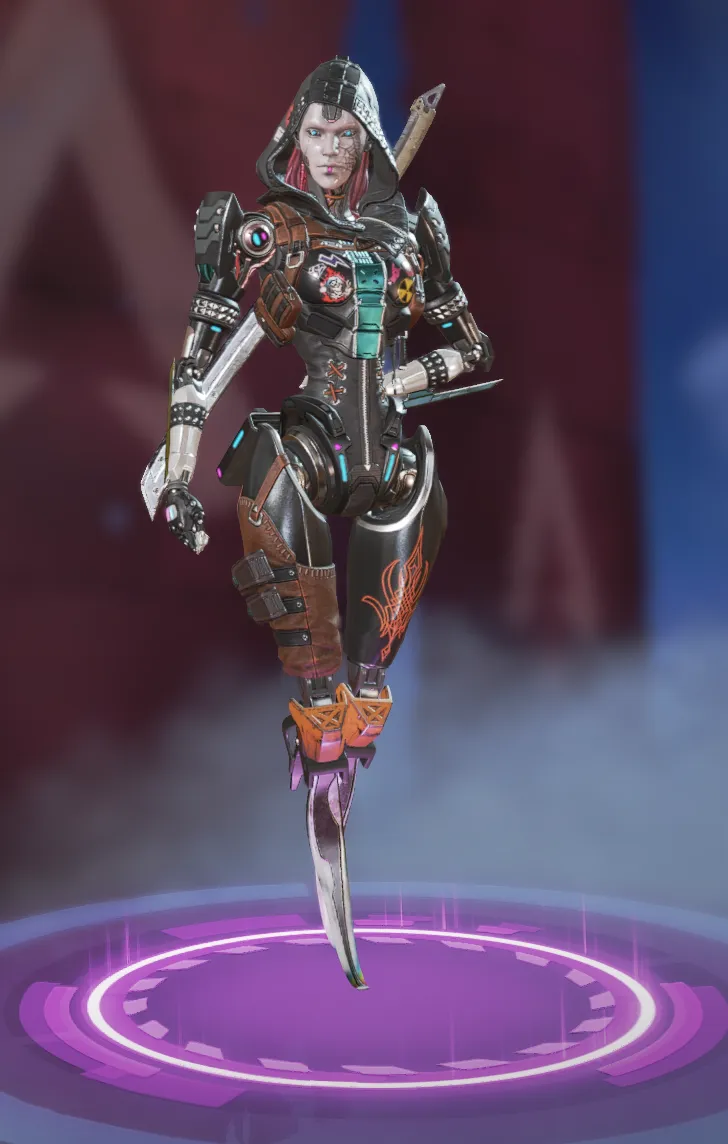 As the name suggests, Modern Primitive skin is primal-looking skin but with a modern touch. The black metal body with a dark brown accent makes the skin look bland from a distance. However, the skin has a nice design and stickers that give a modern vibe at a closer inspection. This skin was a part of the Premium Battle Pass in Season 12.

This skin is for players who have always thought Ash would look better with teeth. 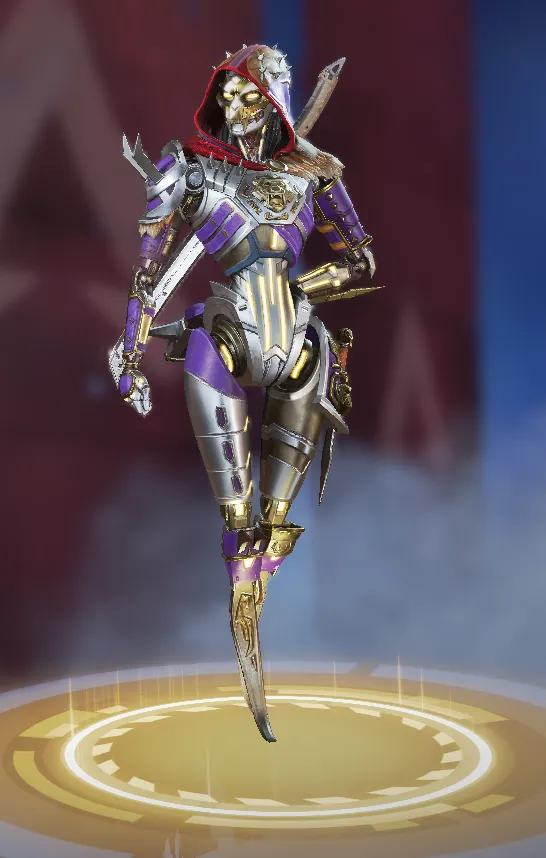 One of Ash’s newest skins, the Synthetic Huntress, was released as part of the Warriors Collection Event. It gives Ash literal fangs and pairs them with an insignia on her chest plate of a lion roaring. The skin features a silver, purple, and gold color scheme, with some red embellishments and golden neon elements. The skin also brings home the hunter theme by adding bits of fur to her shoulder and beneath other parts of her armor.

As a collection event skin, players who couldn't unlock this during the Warriors Event will be out of luck for now, but will most likely be able to add this skin to their collection if Respawn adds it to the store.

Synthetic Huntress can be unlocked with 1,800 Apex Coins or 2,400 Materials.

9. Denizen of the Deep 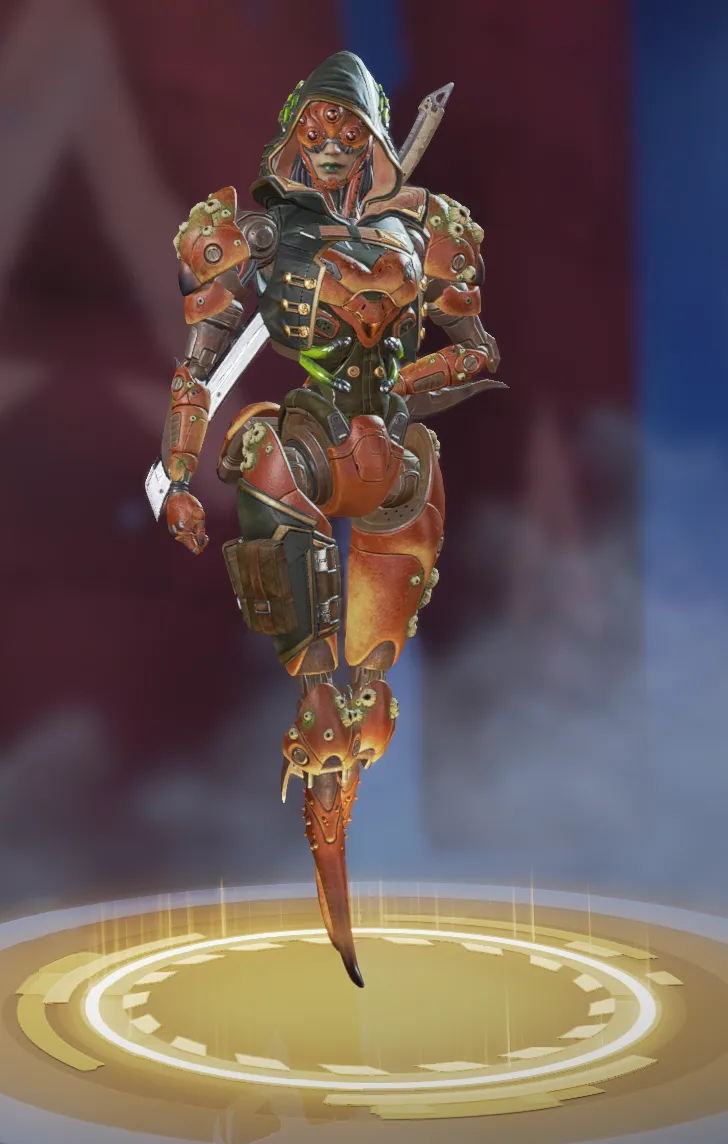 Introduced to the game during the Dark Depths Thematic Event, Denizen of the Deep seemed to take equal cues from the deep and sometimes mythical ocean-themed skins from the rest of the Dark Depths cosmetics, and the pirate stylings of the Raiders Collection Event that came just before it. The skin makes Ash’s trademark hood part of a bigger garment, complete with a leather coat and brass finishings, while the normally-angular blades adorning her body get a more old-timey, scimitar look to them.

Not stopping at «robot pirate», the skin also adds barnacles and weathered metal all over the place, has some green fluid coursing through tubing attached to her midsection, and gives Ash five pupil-less eyes. Oh yeah, and her lips are dark green now. 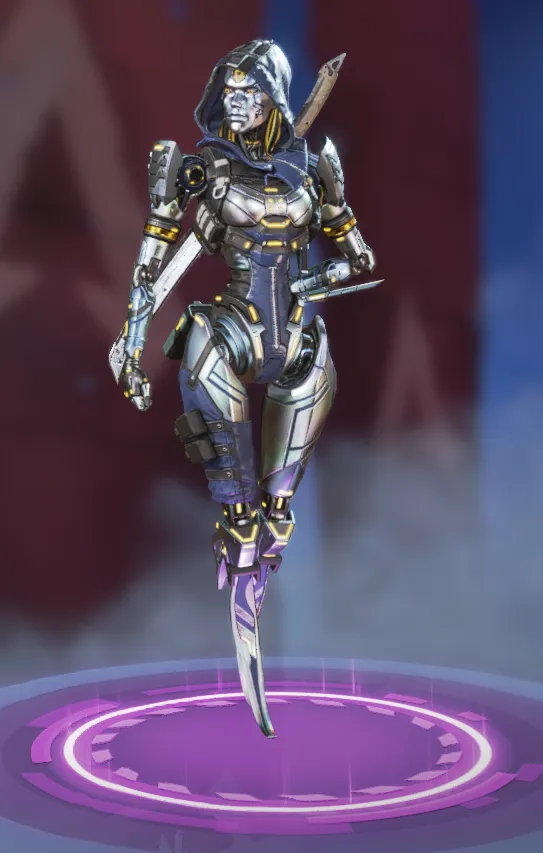 There’s nothing too much crazy going on with Burning Chrome skin. However, the shiny silver plating and blue color combination make the skin look pleasing to the eyes.

Burning Chrome Ash arrived with the Season 12 Anniversary Collection Event and could be unlocked with 1,000 Apex Coins or 800 Materials.