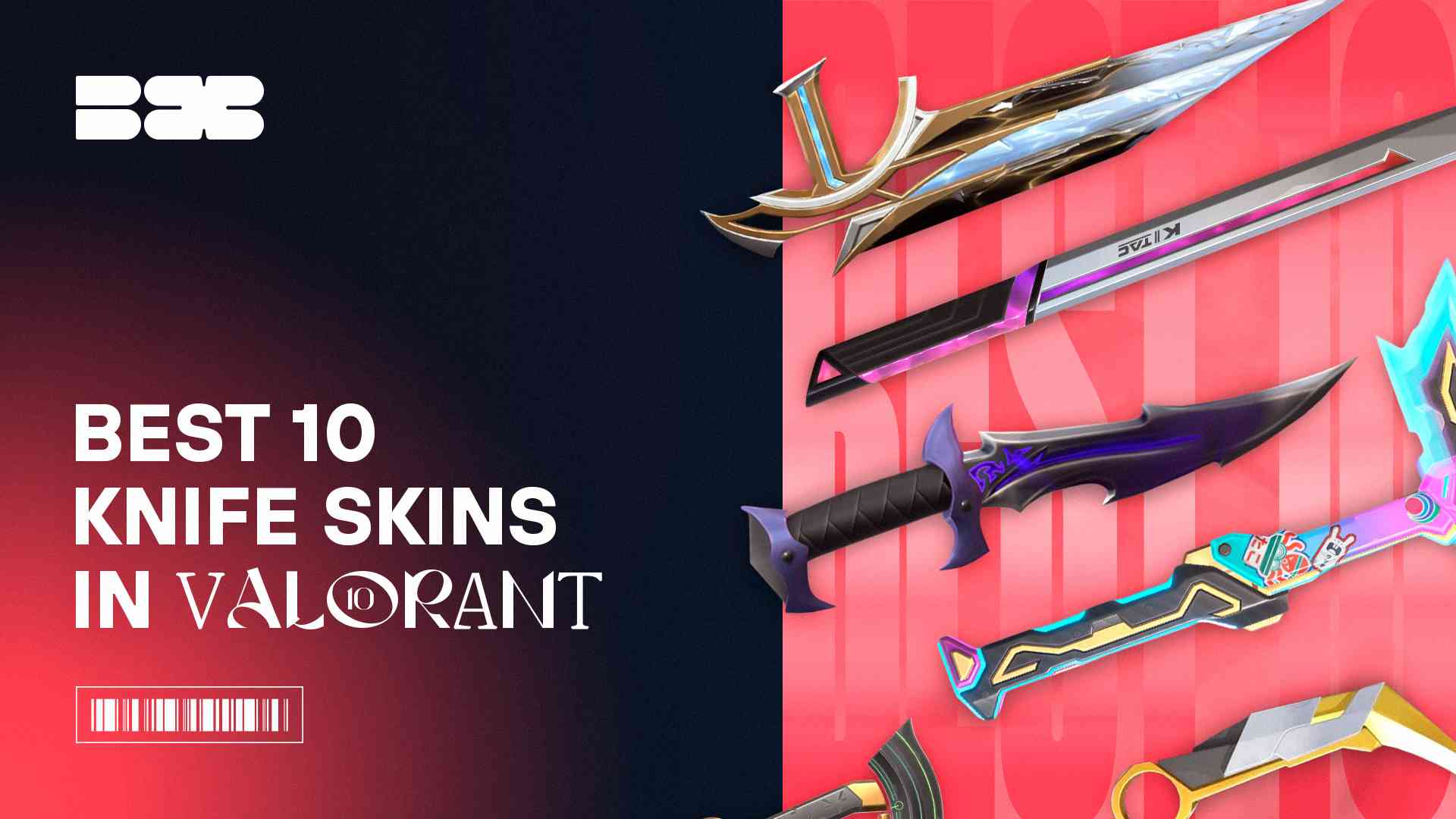 Every Valorant player wants to change something about their aesthetic. A new map, a different character, another skin, another weapon... But the knife is a melee weapon that seems to grow into the nature of the player. If you take it out while sprinting, you’ll dash faster! And for self-defense, it’s simply necessary. And that’s why players usually choose a knife skin seriously and use it for a long time. Remember, you can't get rid of or drop a hand weapon, so choose wisely! So, what knives are considered the best in Valorant? 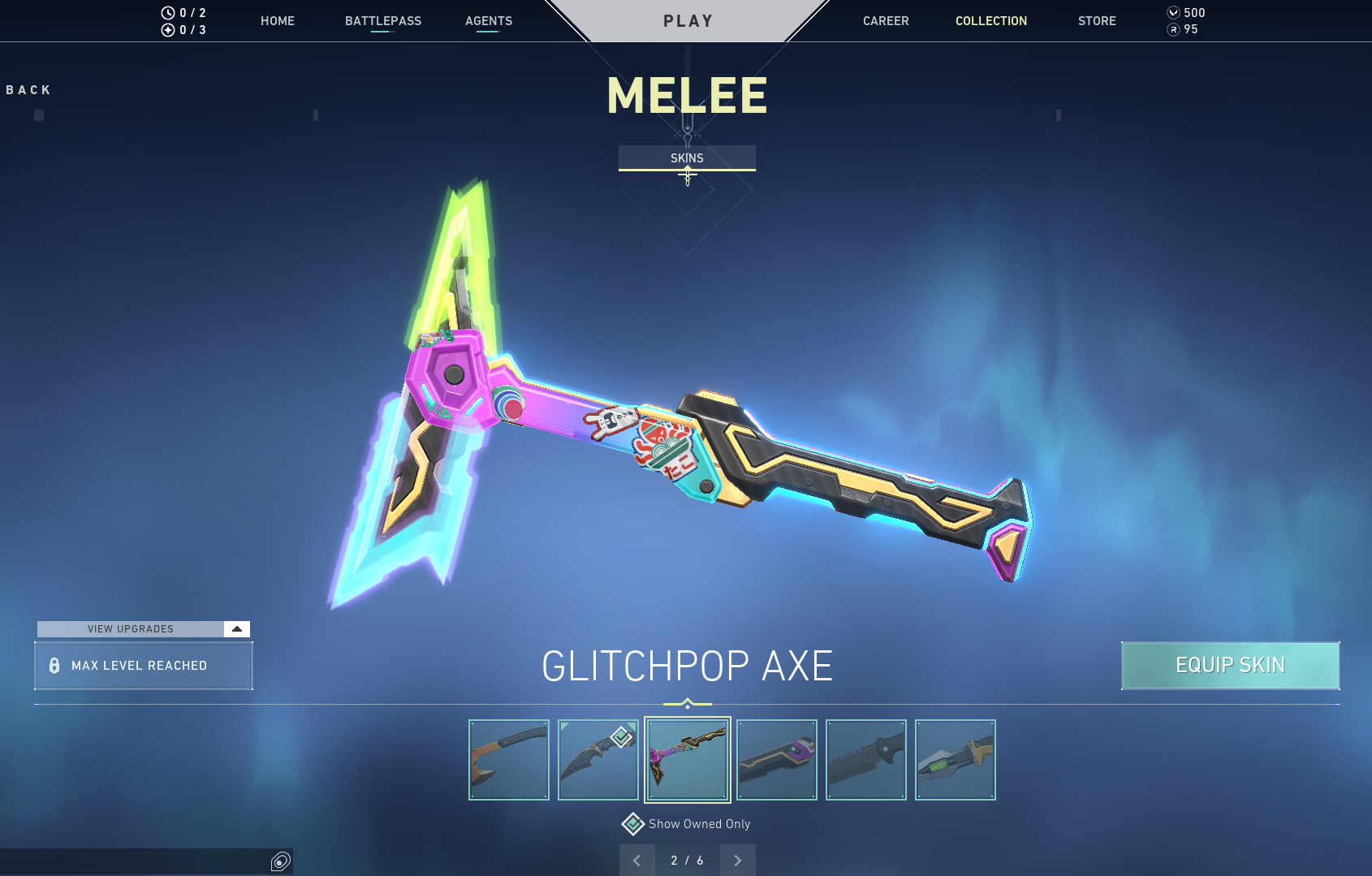 Our tenth place in all the lids of the best Valorant knife skins is deservedly occupied by the Glitchpop Axe Skin with its fascinating, bright and psychedelic colors. But, this isn’t actually a knife as such — it’s a hatchet — and what could be more fun than a psychedelic hatchet? The skin is one of the most popular. The hatchet was part of the Glitchpop set, which was bought hugely popular at the time. Plus the owner can add a holographic outline. The knife has distinctive visual marks, and even sounds like a slash! This skin costs 4350 Valor Points. 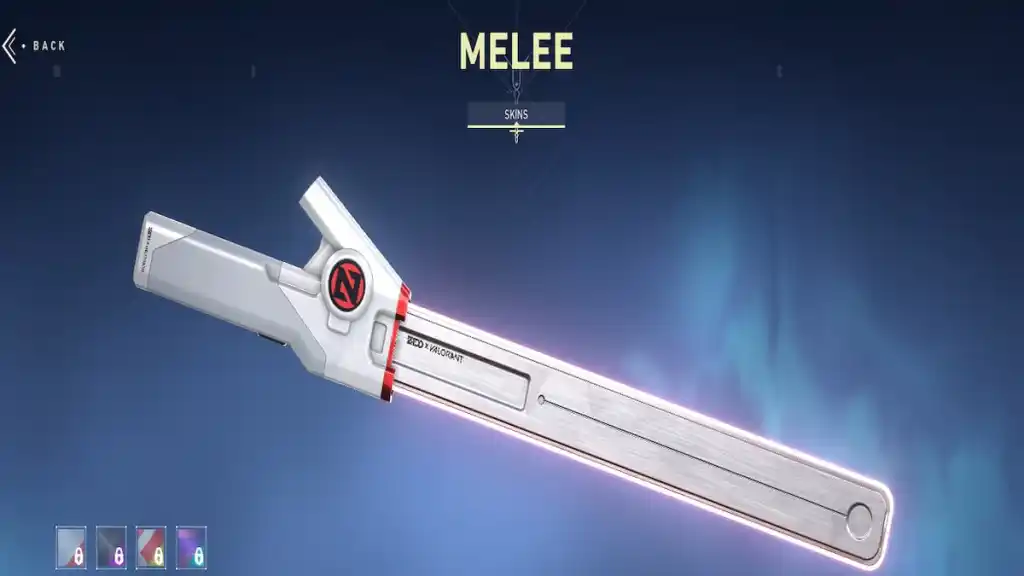 The Spectrum Waveform Knife was designed in a collaboration with Zedd and has a futuristic, light saber feel

Next up, in ninth place is the Spectrum Waveform knife. Its blade looks and feels like a light saber thanks to the sound and lighting effects! The skin was created through a collaboration with a designer working under the pseudonym Zedd before Riot Games released it. The result was an excellent design — the skin has several options that alter the colors of the grip and blade. The handle is usually white, but it can also appear white overall, with a purple pulse through the blade. Or it can be green with a handle of either black, white, green, or red. It even comes in a purple-pink-blue color scheme. On top of that, the transparent blade allows you to apply vibrant color and pulse effects. And this skin also comes with stage music written and created by Zedd. The skin reacts to the music with different color waves. It’s basically a perfect skin… You’re probably wondering why it’s down here at ninth place. Well, that’s because it costs as much as 5350 Valor Points. A pricey option, and there are many other skins to flex with at a better price. 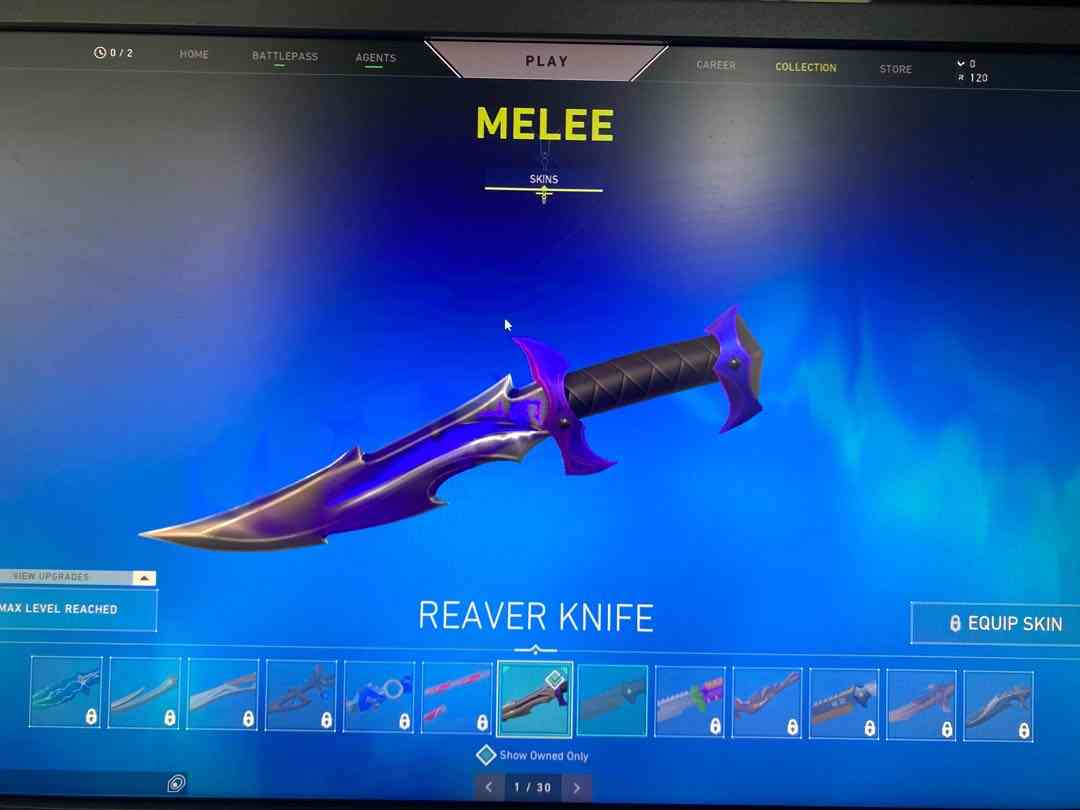 Coming in at number eight in our pick of the best knife skins in Valorant is the Reaver Knife skin. A thick handle, black, with purple trim. General view: it’s as if the designers were planning to use this knife to help them bring about some grand prophecy! Or even sacrifice someone — killing enemies with the intent to offer them up to some dark entity can be both entertaining and rewarding sometimes... But back to our Reaver Knife. This skin has a beautiful metallic finish. There’s even an engraving and two options for updating the blade, VFX, and SFX. Plus it only costs 3550 Valor Points!

Relic of the Sentinel Knife

Our seventh place can safely go to the Relic of the Sentinel. This knife looks more like an artifact than a weapon! But that’s to be expected when the blade is based on a massive crystal. It’s held like an axe, (abrupt to the edge) but it doesn't look like an axe at all! The surface isn’t what spins and cuts, but precisely what strikes. And the color options are lovely; gold with white, pink, red with green, and blue with purple. Another fun feature, when inspecting the weapon, its crystal part rotates around the handle! This blade is an imposing pick and will set you back 4350 Valor Points — a little expensive but worth it. 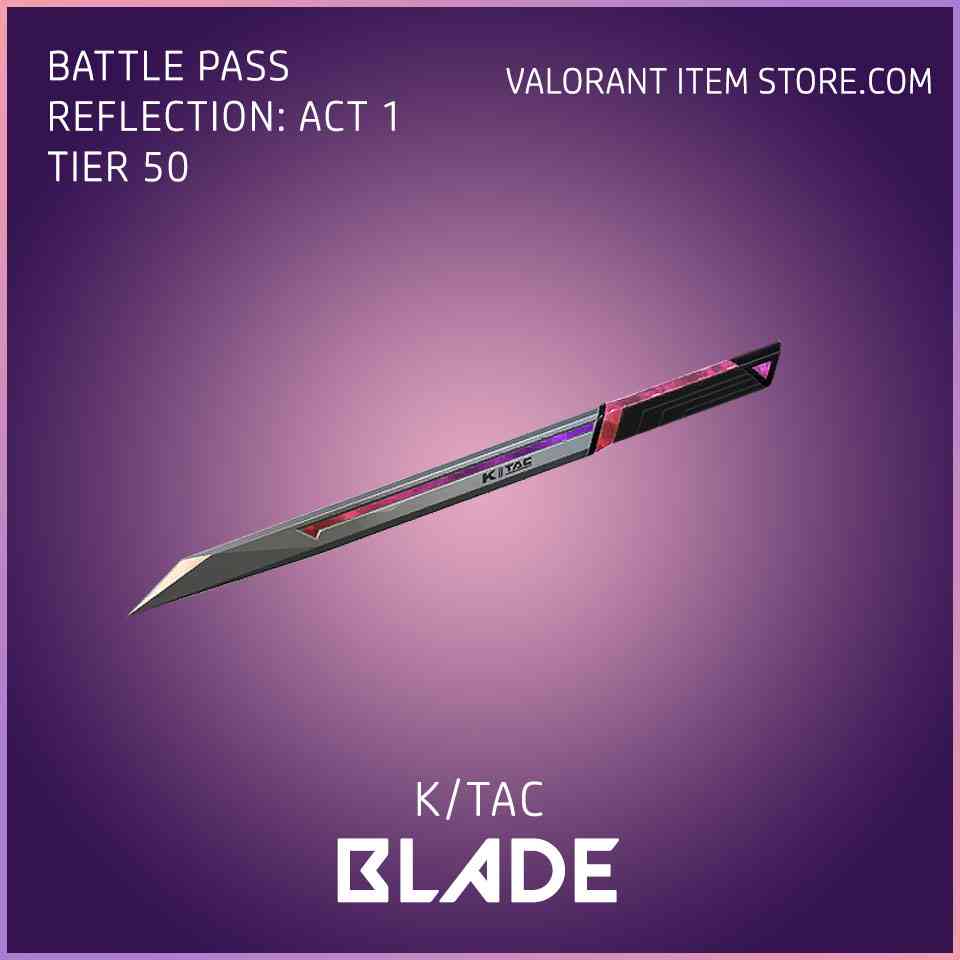 In sixth place is the K/TAC Blade. It’s your typical streamlined, high-tech dagger, as thin as any ninja weapon. The futuristic design of the entire collection and this knife, in particular, has the essence of something a real ninja would wield! The hilt is black ending, inlaid with crystals, and the name of the skin is penned on the blade in a bold, sci fi style font. Worth noting however, unfortunately this skin can’t be bought for Valor points: it was issued upon reaching level fifty in the REFLECTION: Act 1 Battle Pass. 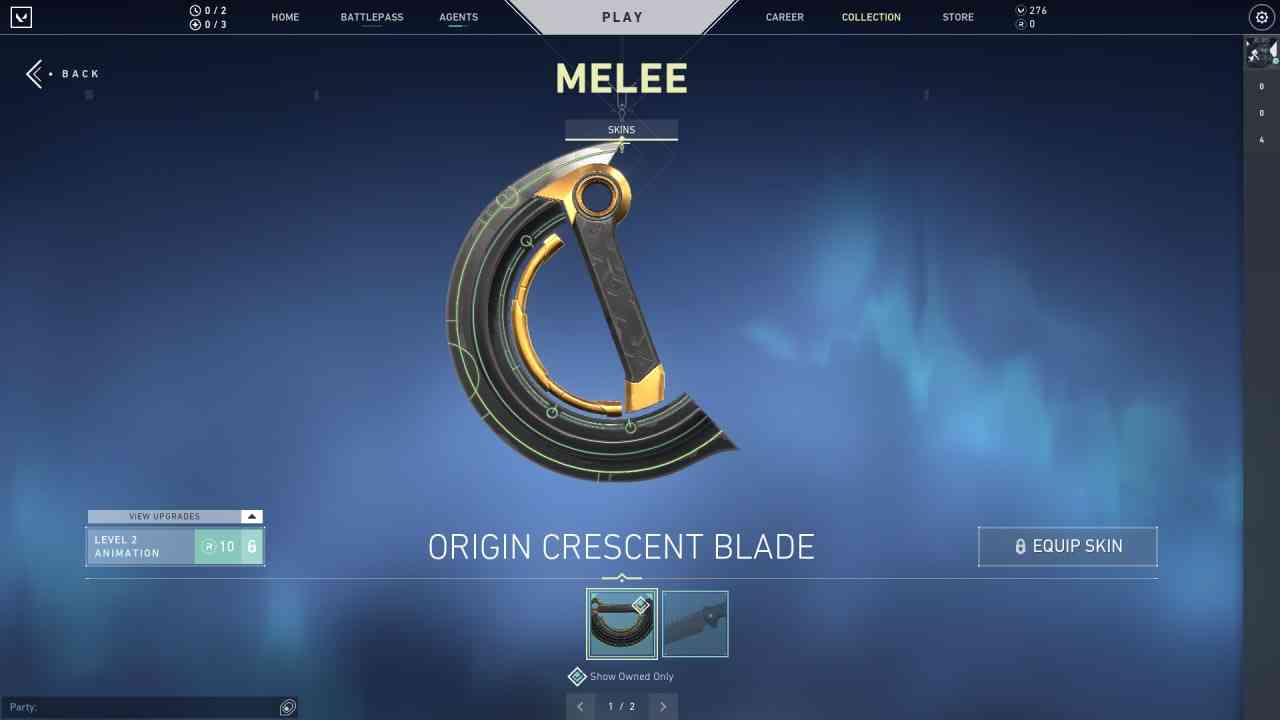 The Origin Crescent Blade knife skin has a distinctive half moon, sickle shape and plenty of lighting effects

Our number five pick goes to the Origin Crescent Blade. This antique looking blade hints at ancient art and technologies. The sickle-shaped edge gives the knife a unique silhouette; there's nothing else in the entire game that even remotely resembles it! Around the central handle the blade curves into a shape like a crescent moon or sickle. Made from black metal with gold trim and featuring green engraving at the end of the blade. The whole blade glimmers with a dark steely finish! When examining the weapon, its blade lifts, letting the character glimpse the moving parts and how they rotate. Origin Crescent Blade’s cost comes in at 3550 Valor Points. 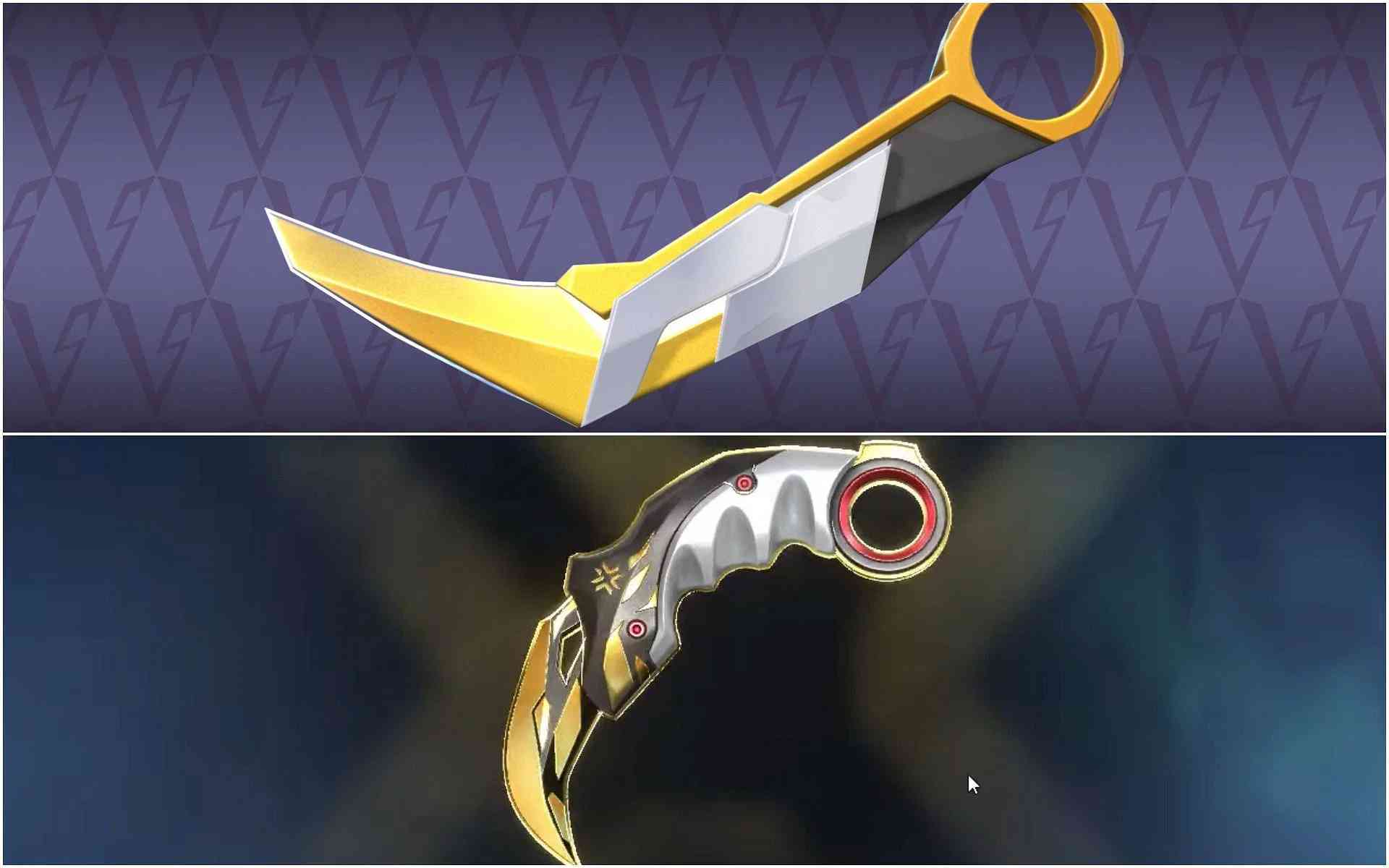 The Prime 2.0 Karambit knife skin has a classic, gold chrome finish that makes it one of Valorant's most popular skins

Fourth place in the top Valorant knife skins fight belongs to Prime 2.0 Karambit. It’s not for nothing that it’s considered one of the most elegant skins in Valorant! Metal finish, Prime Gold-themed ending, sharp edge, and safety ring. A skin like this looks clean, sleek and minimalist. It has no unnecessary options. There are only improvements to the timeless style and additional lighting alternatives. And players can add a dynamic transition, with the character opening the knife from the folded position. All for a cost of just 3550 Valor Points. 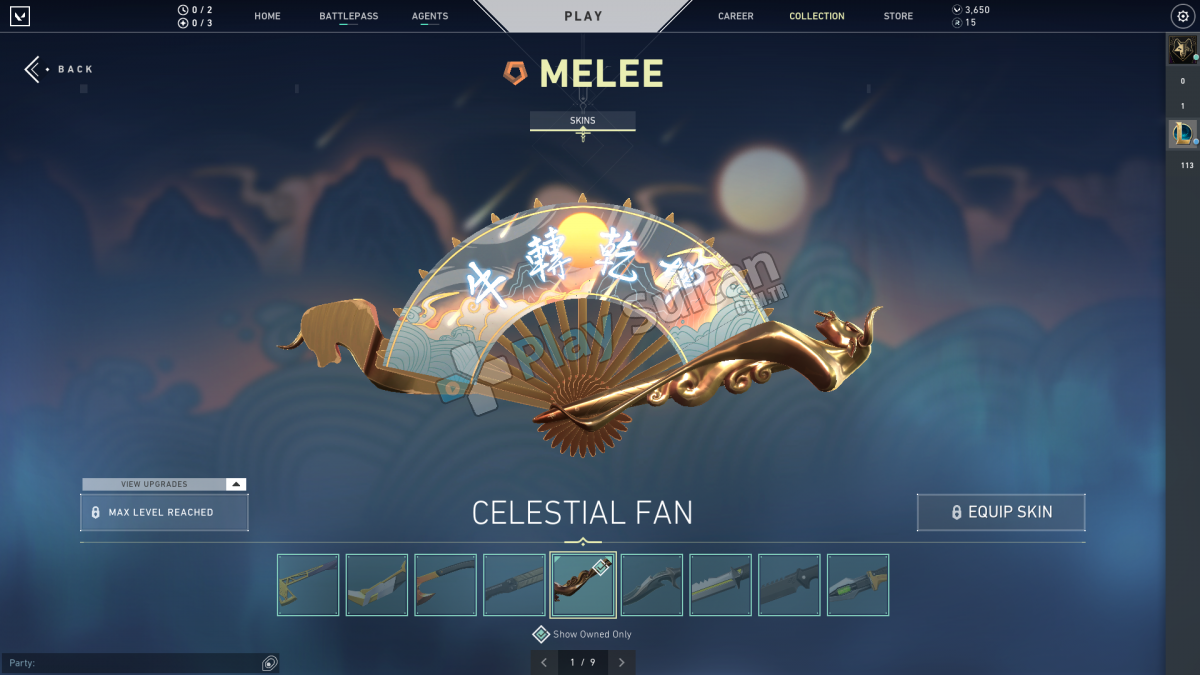 The Celestial Fan knife skin is one of the best skins in Valorant, featuring a pair of bronze, horned bull's as fan guards.

Our bronze medal for the top knife in Valorant is deservedly given to the "Celestial Fan" knife skin — based on the ancient Iron Fan weapon or tie shan, as it’s known in its homeland of China. With beautiful animation and a fantastic design featuring a bull's head along the fan’s guard. But then the ancient Chinese knew their business when it came to deadly aesthetics — it seems like a beautiful hand fan when the blade is open, but snap it closed and it becomes the most terrible weapon... The head of a bull with sharp horns is designed for packing a punch in close quarters combat, while the fan’s folds, engraved with Chinese characters, lend it a celestial, ethereal vibe. There are no options, only updates, but for a cost of 3550 Valor Points the skin is perfect! 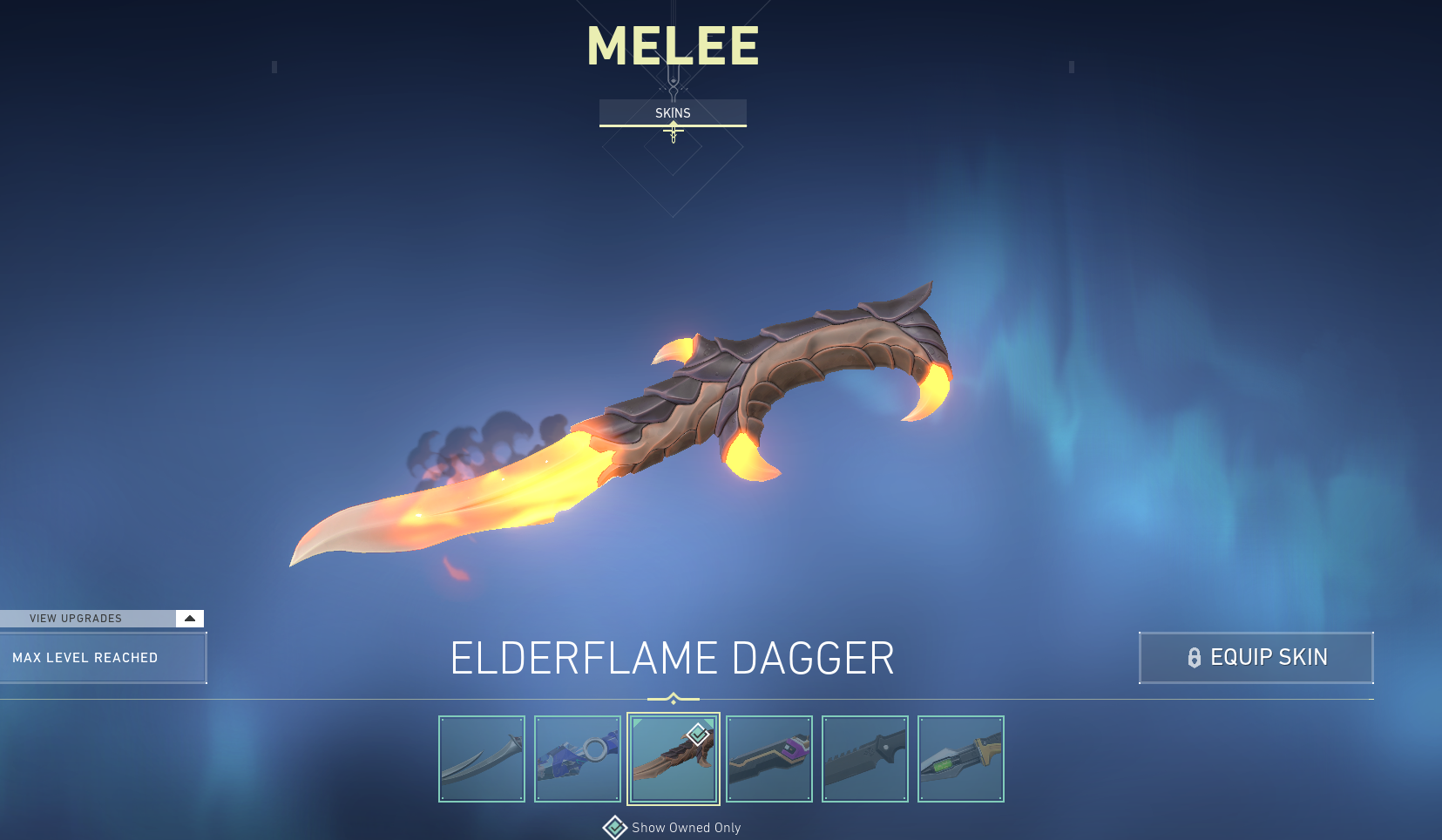 Our top two spot and silver medalist is the Elderflame. Yes. It's a dragon's claw. The knife takes the form of a dragon’s talon, with no effort spared in its incredible and realistic detail. The blade lights up when drawn, turning into a fiery dagger, plus it includes visuals and slashing SFX. The entire Elderflame collection is beautiful, and the knife skin is definitely no exception! But of course, it costs a lot — 4950 Valor Points. Quite a lot, indeed. Still, this skin is a solid pick for any player, even at this price! 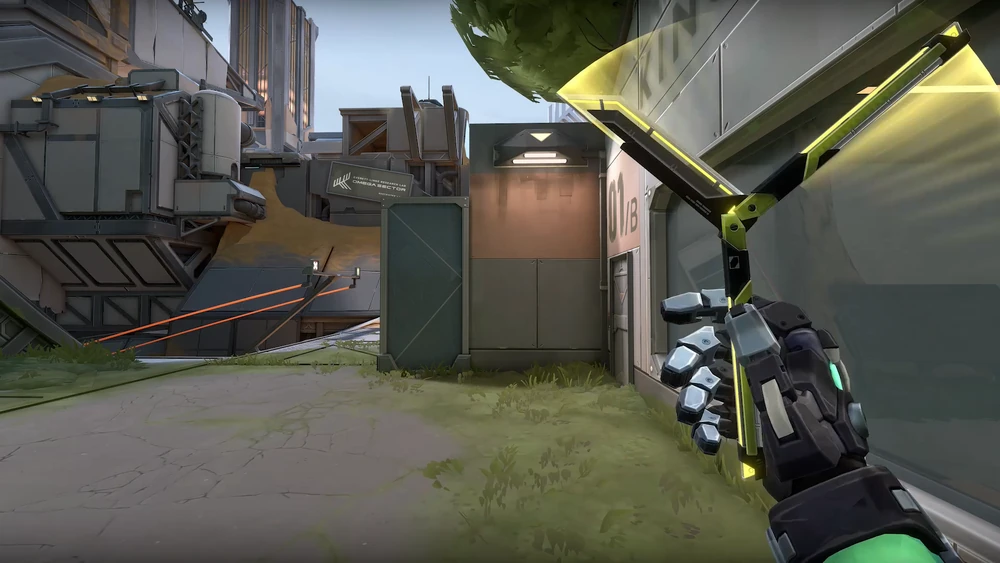 A player flips open the RGX 11z Pro Firefly knife skin for Valorant in the green and black color scheme.

So, what takes the top spot? Well, the best knife skin in Valorant goes to the RGX 11z Pro Firefly. A butterfly knife with green handles that can flip open to startle your opponents! The green variant is the base color scheme, but there’s also a red, blue, and yellow variant available. The Firefly’s colors change during weapon inspection — alongside a snazzy sound effect and some stunning slash animations. This beauty will cost you a total of 4350 Valor Points.

Picking a skin for your knife in Valorant means considering what features are essential to your style. Some of them completely change the shape of the blade! Others have dazzling lighting. Plus there’s effects, visuals, and sound for all of them! So, a skin for a melee knife is something you just can't — and shouldn’t — do without.