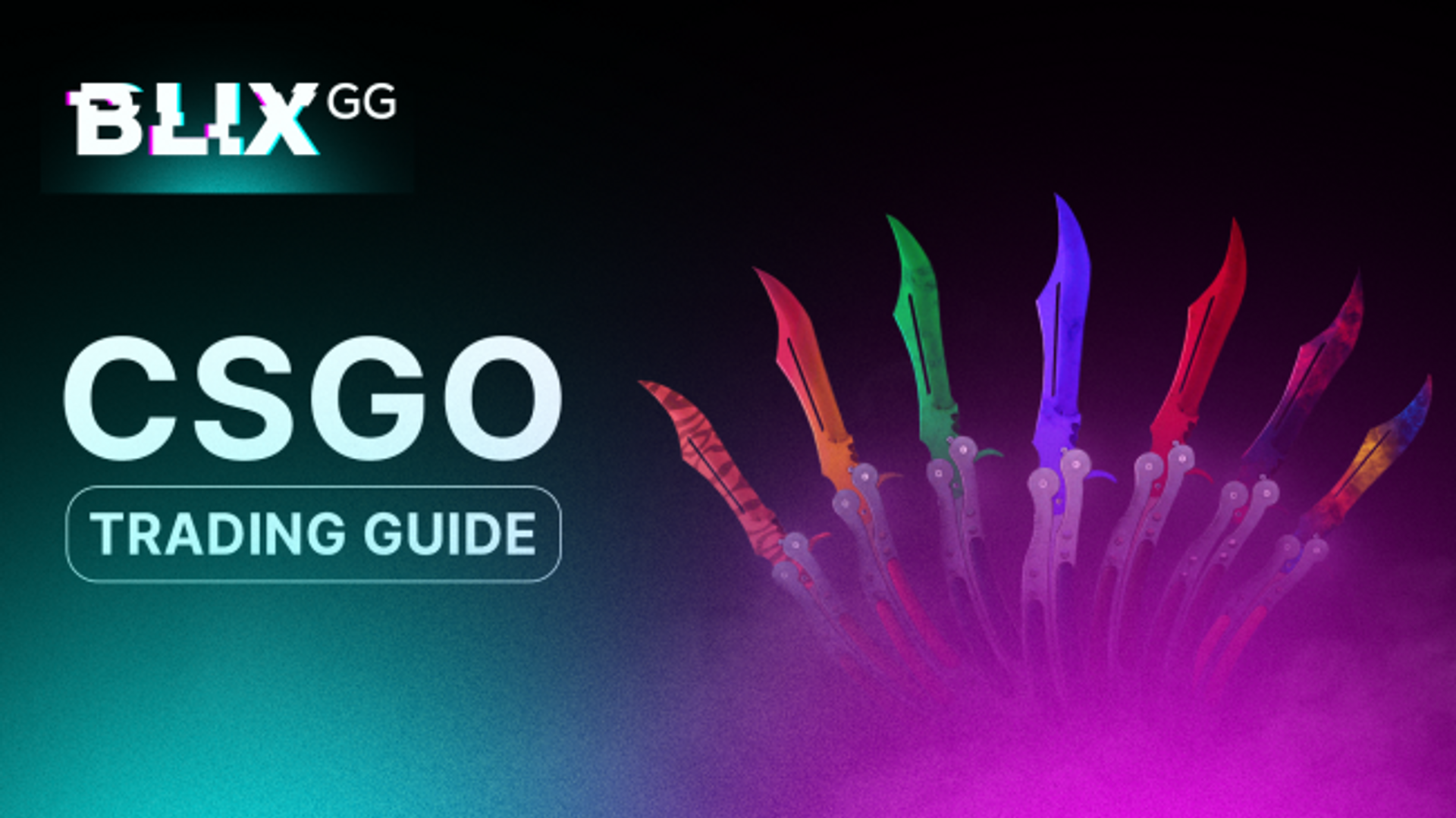 In late August of 2013, CS:GO added the famous Arms Deal Update, where Valve added skins to the game. The update completely revolutionized how people looked at the game since people could theoretically make money from a game. Each CSGO item was designated a monetary value that hinged on various aspects of the skin, including its float, rarity, and supply. The steam market was not the only place people could buy skins; they could also trade their skins with a person. Trading in CS:GO can be perplexing for beginners, and thus one must understand its dynamics before investing a significant amount. This CSGO Trading Guide 2022 aims to instruct you about the fundamentals of trading in 2022. If you want to be on the receiving end of lucrative offers, stick along, and this trading guide will lend you a helping hand.

To avoid getting manipulated by sharks, it is imperative first to understand the mechanism behind calculating skin value. It will help you get the right price for your digital goods, but it will also help you avoid falling for suspiciously good offers. Referring to the Steam Community Market is usually not ideal since many aspects like float, applied stickers, and patterns are taken into account when dictating the value of a skin. The ability to discern the correct worth of skin with experience and research. Please note that there is never a fixed price for any skin after factoring in its stickers. 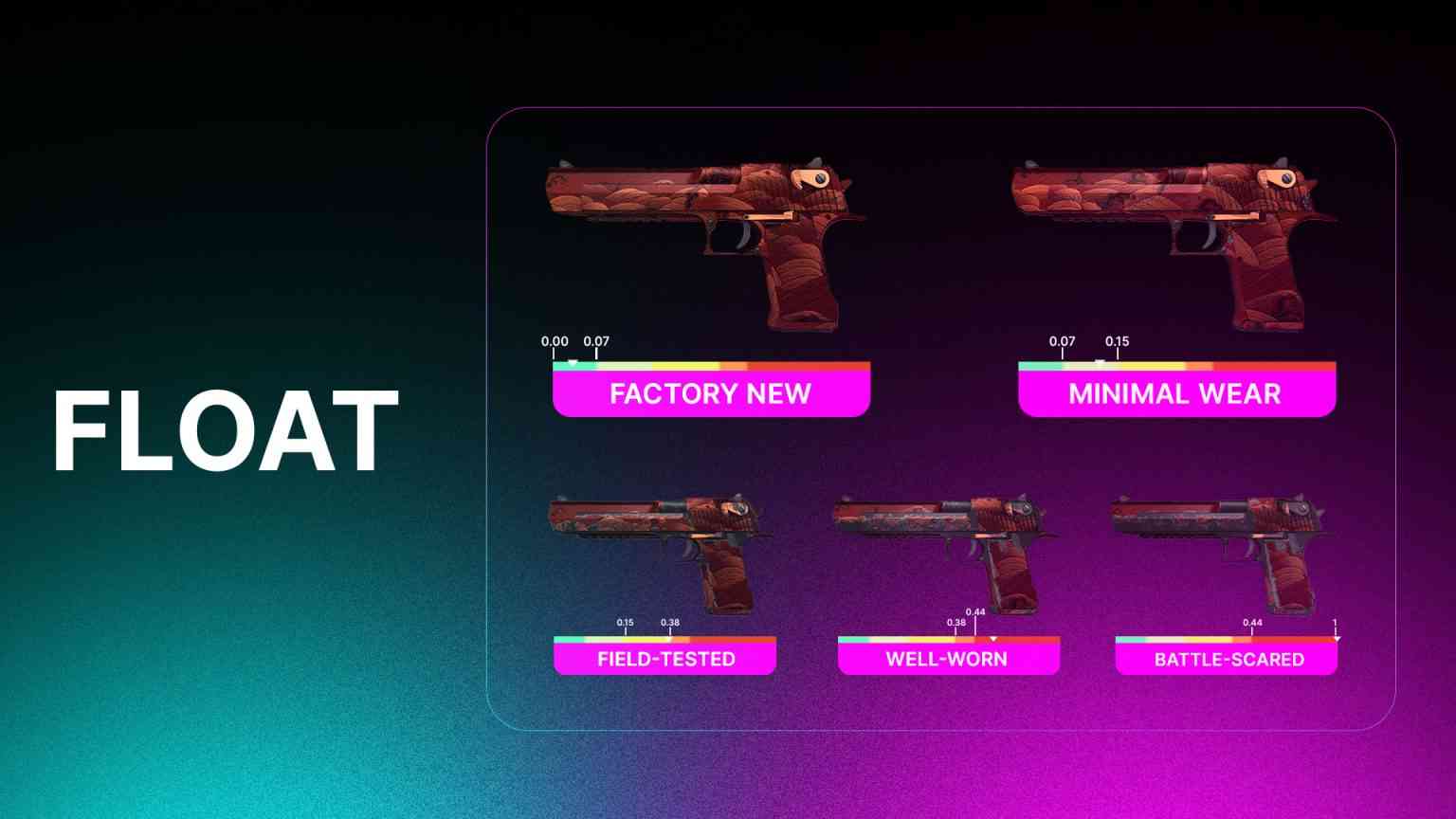 Every skin in the game has been assigned a value, generally in the range of 0.00-1.00, which attributes to how much the skin has been worn out. To put it into perspective, a skin with a float of 0.99 will show more wear and tear than the same skin with a float of 0.01. The skins can be divided into classes based on their float value.

Naturally, the float also impacts the value of the skin. Usually, skins with lower floats are more desired and more expensive. However, in cases such as an AWP Asiimov, the famous Blackiimov (float >0.95) is way more costly than a field-tested. 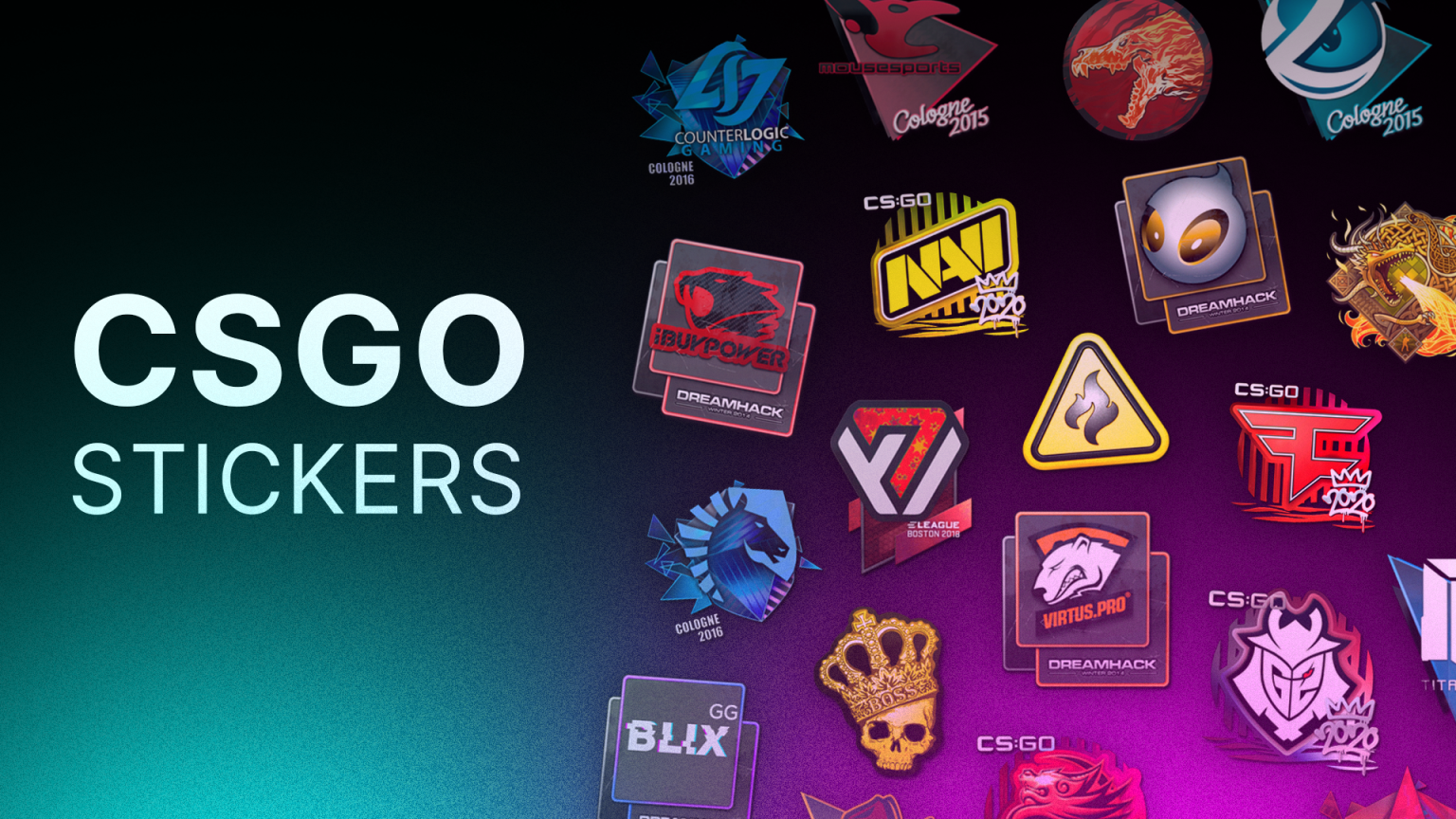 Achieving proficiency at calculating prices of stickered skins comes by observing sales. There’s no rule of thumb to determine the exact cost of a stickered weapon. The value a sticker will add onto a skin depends upon a multitude of factors stated below:

Rarity is one of the essential aspects that holds sway over the value of the craft. The rarer the craft is, the more value the sticker will add. It is why older stickers fetch a higher value when applied to freshly released skins. For example, A 2015 Katowice sticker applied on the scope of an AWP Worm God won’t add as much value compared to the same sticker applied on the exact position of an AWP Wildfire. The reason is simple; the sticker was way cheaper in 2015 than it is now. Thus, Katowice crafts on a skin released then were way more common than now.

Another factor that comes into play while determining the value the sticker will add is its placement. All the four spots (except tec-9 and G3SG1) on the weapon where the sticker can be applied hold disparate significance to the added value of the sticker. To know more about the best and worst sticker positions on a weapon, refer to this detailed guide by Hydrogen Angel, which covers all the weapons that can be bought in-game. Another contributing factor is the streak of the stickers. A combination of consistent 4x stickers will always fetch a higher value than different stickers.

Last but not least, the appearance of the crafted skin is ultimately what matters most. If the skin doesn’t look good, it will become hard to resell it, and you may sell it for a low value. Contrarily, if the sticker fits the skin well, someone can even pay more than the skin is worth if they fancy it.

Besides float value, skins are assigned another attribute called ‘paint seed’. It is a random number that falls in 0-1000. The skin is wrapped around the weapon in multiple ways. Paint seed determines all the different ways the wrapping is done. Thus, it gives rise to another variable that influences the weapon’s value: the blue leaf pattern, the star pattern Glock moonrise, p250 nevermore, and AWP Paw. Slaughter knives also have different patterns with changing paint seeds. The diamond pattern is one of the most desirable slaughter patterns. It’s hard to find people who will overpay for patterns. 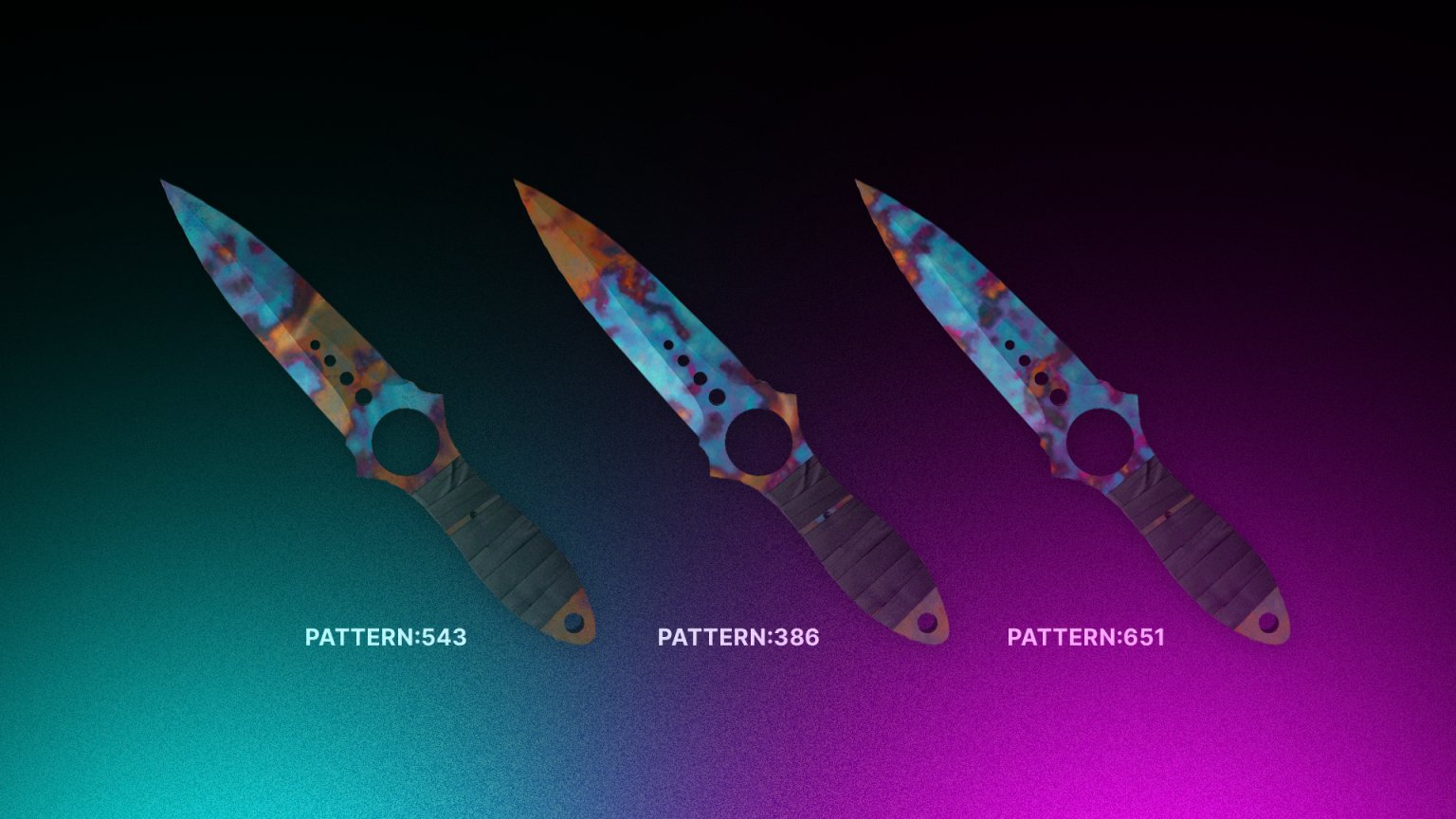 Case Hardened skins also show alterations in their blue and gold color when their paint seed fluctuates. The value of the skin increases significantly when the blue color on the skin is at its apex. For instance, the well-known AK-47 Case Hardened with seed 661 is considered the epitome of blue gems and evaluates to over $40K.

Trading CSGO skins without dealing with scammers is usually a big ask. However, there are many trading sites where people can exchange their skins for new ones without worrying much about getting scammed. These trading sites vary in terms of their commission and their services. In this article, we will only discuss BUFF163 and CS Money, two of the most popular trading platforms at present. However, you can always surf through other sites to uncover better deals. Some popular websites are referenced below: tradeit.gg, swap.gg, cs.trade, bitskins, dmarket, lootbear and Zipel’s latest project SkinBid. You can also use gambling sites like csgoroll and CSGOEmpire that don’t charge any commission for cashing out.

CS Money has been one of the most prominent trading websites for over half a decade. Its easy-to-use user interface makes it highly convenient for newfangled traders. Over the years, cs money has built its reputation for being reliable and unsophisticated. It is also exceedingly fast. You can trade your skins for new ones on the interface, and you will receive the offer from a bot at a moment’s notice. Cs money also holds the upper hand over other trading sites by a profusion of skins. It has over 80K DOTA2 and CSGO items on its website. It allows the user to find tons of attractive deals on the website. It only charges a maximum of 7% commission depending upon the skin. Users can also buy and sell skins for real cash on CS Money. it offers a 45% bonus while topping up your balance to trade or a 28.6% discount while buying skins directly from its store. Another distinct feature of cs money is its AI that calculates the value of skins while considering its float, stickers, and pattern. Even though the prices are never cent percent accurate always, the convention can be used to gain insight for beginners. The 3D model viewer is another peculiar feature of the website. It provides the user with a 3D perspective of their skins. It can come in handy while looking at particulars concealed in the 2-D screenshots. For example, the top of ak-47 Case Hardened can be viewed in the 3-D viewer to picture its Blue Gem pattern better.

Note: It is recommended to double-check the website you’re logging into. There are numerous fake sites on the internet waiting to trick you. CS Money itself has a lot of dummy sites like:

BUFF163 is a leading Chinese trading website that has grown globally. It is one of the largest 3rd party marketplaces that offer a peer-to-peer trading platform. BUFF only charges an economical 2.5% fee on CSGO, TF2, and Z1 items and an even lower 1.8% fee on DOTA2 items. Since it’s p2p, cross-check the buyer’s registration date when confirming an offer on steam mobile from buff. BUFF becomes an ideal choice for trading as it has a multitude of filters that assists users in finding attractive deals quickly. One of the shortcomings of BUFF is that it’s not possible to directly buy or withdraw a balance to a non-Chinese bank account. However, you will find ample traders selling or buying credit spontaneously on social media. Remember to verify their cash rep before making cash trades. Another alternative is using BUFF Market. It is a global platform released by BUFF in April 2021, supporting overseas balance transactions. However, it accompanies an increased 5% fee.

HOW TO MAKE A PROFIT? 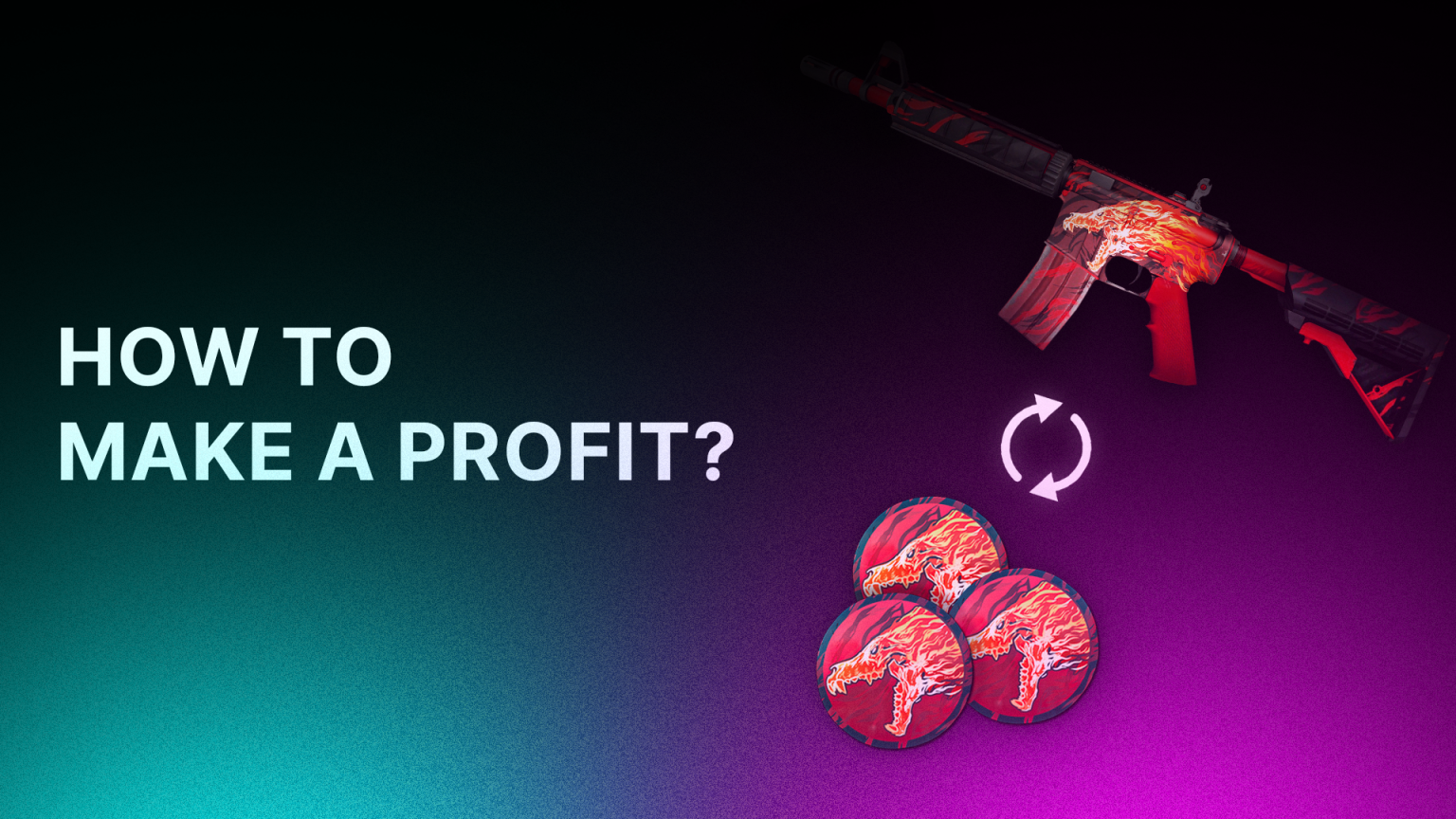 Snipes: Hunting for snipes is one of the easiest ways to profit. With the increasing prevalence of marketplaces, you can always find people trying to quick-sell stuff to buy something else. All you need to do is keep monitoring several marketplaces. You need to have adequate knowledge about stickered weapons, or you may purchase overpriced skins.

Investing in stickered items: Since Katowice 2014, stickers skyrocketed in price, many traders have started buying stickered weapons. Since they don’t come with an entirely precise price tag, traders get some room to capitalize on. Applying stickers on skins also makes them peculiar, so you may also run into someone deeply interested in your craft and may even pay more than it’s worth. However, keep in mind that it’s harder to trade stickered skins than liquid skins. Keep in mind that looks matter as much as value. So don’t end up buying into safari meshes with Katowice 2014 stickers.

Trading between sites: With all the trading sites using different expressions to put a price tag on skins, there is always some room to rack up decent profit. It used to be one of the most efficient ways to gain some profit before valve imposed the seven-day trade ban on newly bought or traded items. Even if it’s far from ideal currently, it can be exploited from time to time as these websites keep updating prices, and some flaws may occur.

Upgrading and downgrading: In trading, Upgrading your skins generally means when you trade a bunch of lower-valued skins for a more desired skin. Since no one wants to trade their higher valued skin for lower valued ones, they seek an overpay to make the trade. Similarly, you can also downgrade your skins and get a hefty overpay. So if you have some cash to splash on a trading site, buy the most expensive item you can afford and keep downgrading it to earn some easy profits. Ensure that the items you receive are liquid enough to sell them later on and continue this process.

Even though cash trading is often risky, it has a lot of benefits of its own. Since you deal with people, you can always negotiate prices until you find a very profitable deal. You can also aim for players who quit the game and are cashing out their inventory. Usually, people cashing out are looking for fast cash and let go of their whole inventory at a shallow rate. The skins can then be resold or dumped on trading sites, and you can end up with a lot of cash from these trades.