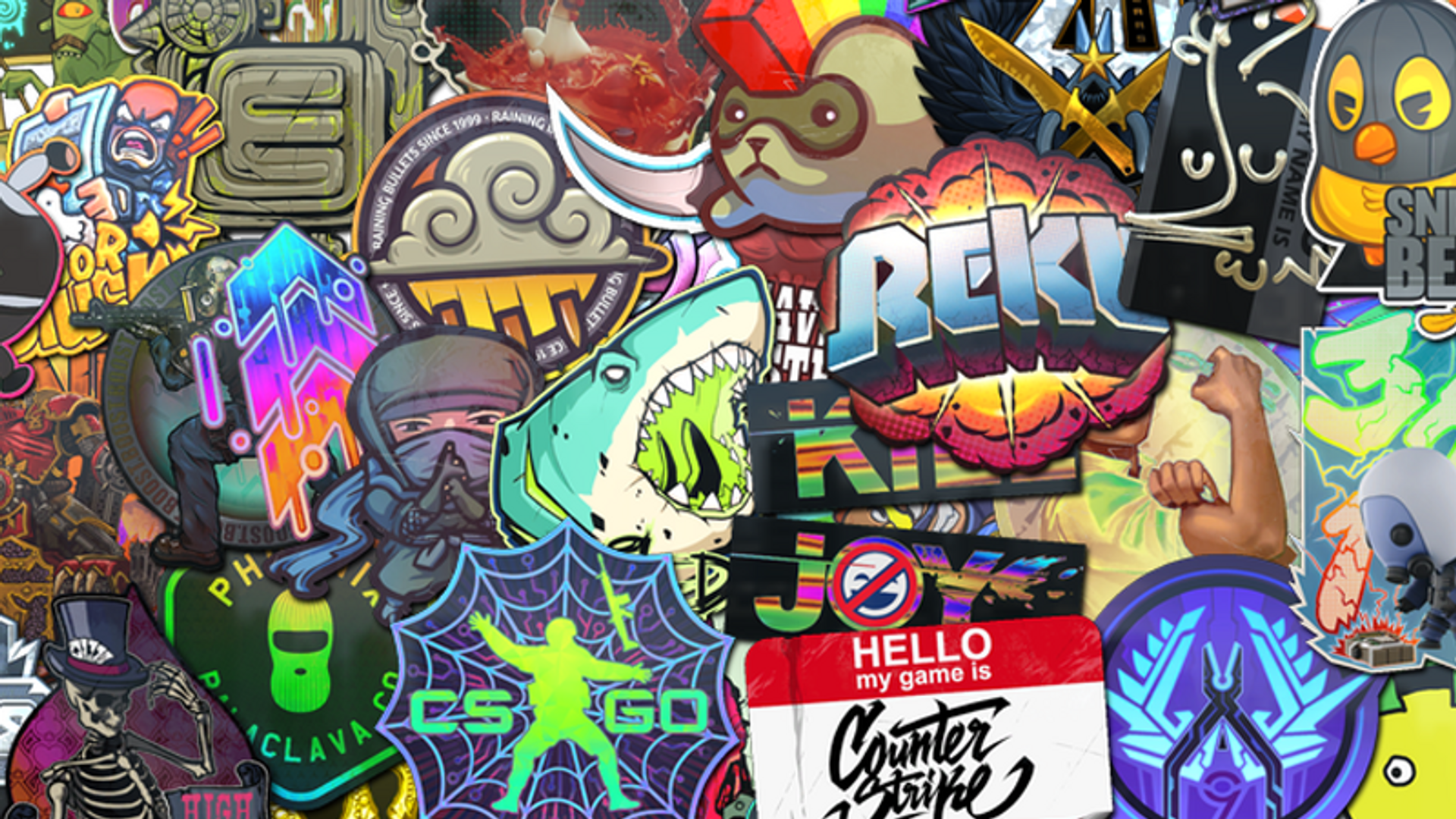 Only a few days separate us from celebrating the 10th anniversary of the game we all love & hate at the same time. For this special milestone, CSGO has previously announced a community sticker capsule contest under the “CSGO” theme remembering the beautiful and exceptional events we’ve had throughout the years.

The community absolutely crushed it and got creative in a way that will make us relive the last ten years in a fraction of a second by glancing and enjoying the art & stickers made. 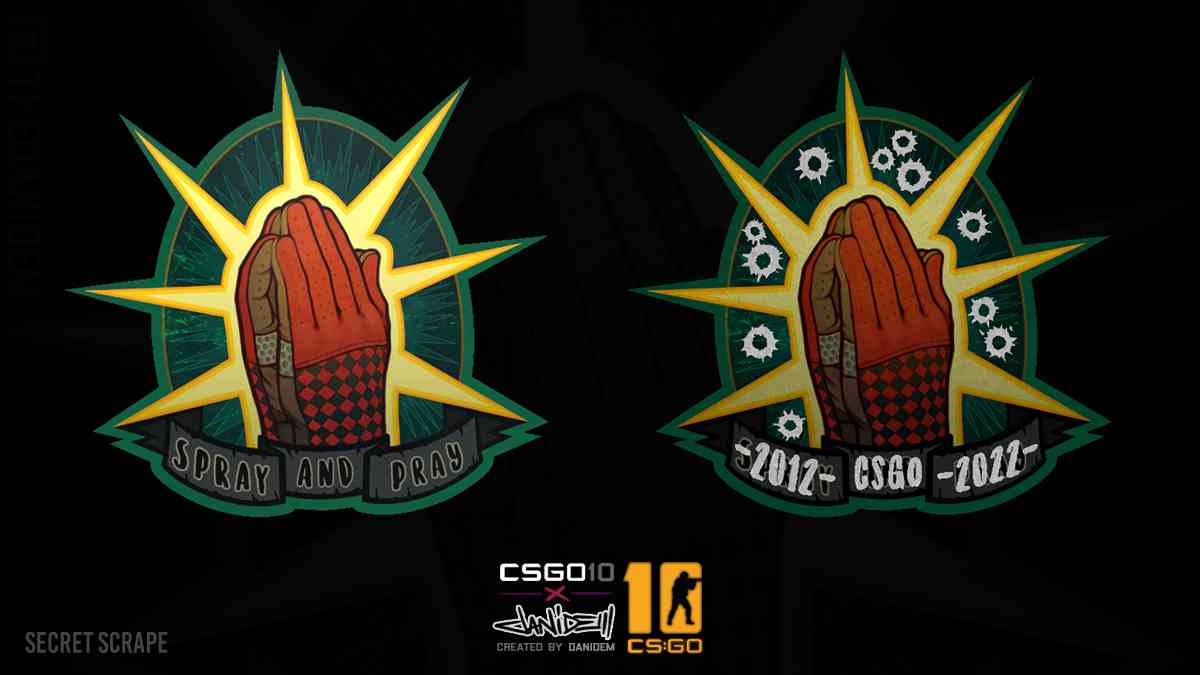 Starting with a good ol’ Spray & Pray, Emptying your entire gun magazine, hoping one shot would connect and take down the enemy.

The design captures that perfectly with a hidden scrape gem that allows you to see the missing bullets, a flawless design followed by a great color combination that lets you appreciate the work of “TheDanidem” who’s well known in the community for his amazing art & stickers such as; Ace Devil, Dragon Lore, Skill level sticker collection among other famous gun skins.

This sticker was initially designed for the CS20 Capsule but was brought back since the term is still relevant. 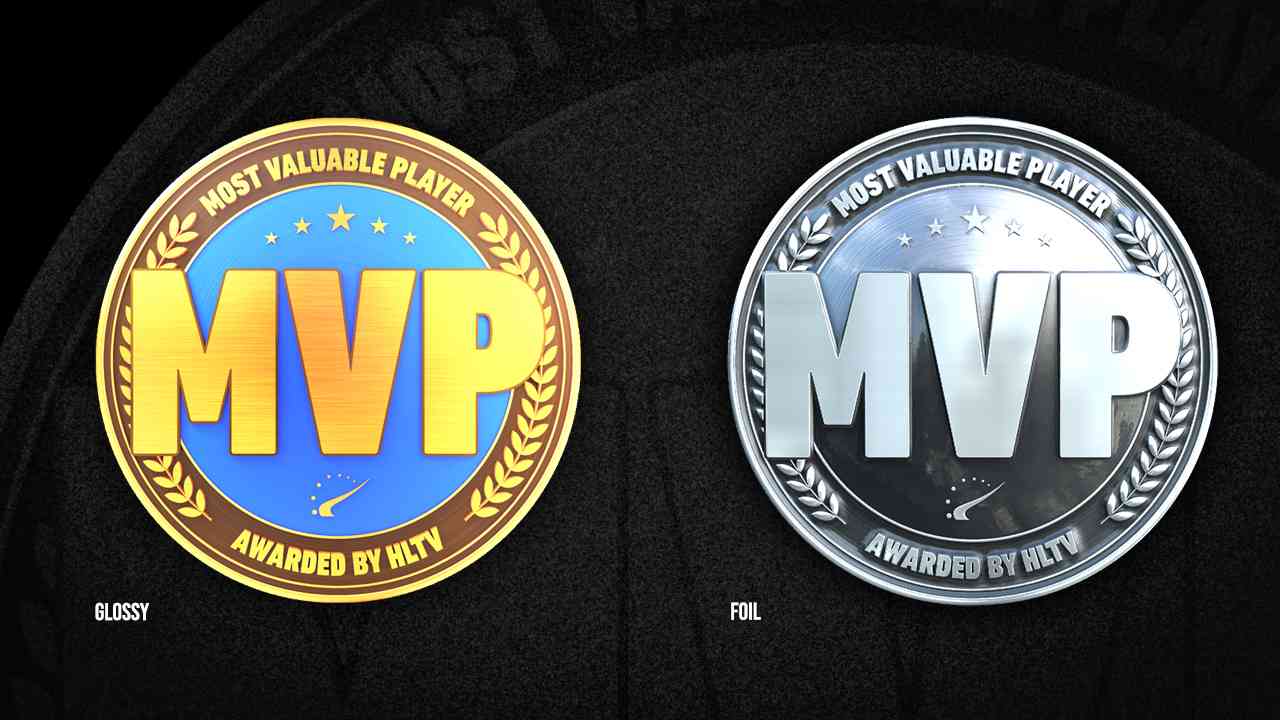 The first HLTV-Branded item in the workshop was done in collaboration with “moonfighter,” the creator of Desert-Eagle Trigger Discipline & USP-S Black Lotus.

HLTV has been the face of Counter-Strike esports for many long years with their exclusive coverage and providing a home for the homeless esports fans in the heavens of “HLTV Forums.”

This sticker is a celebration of the shared history and the legends that were lucky enough to be honored with such a title.

“Moonfighter” exclusively told us that the main focus was on the Foil version to make it cool, which he did by giving it a shiny silver effect. 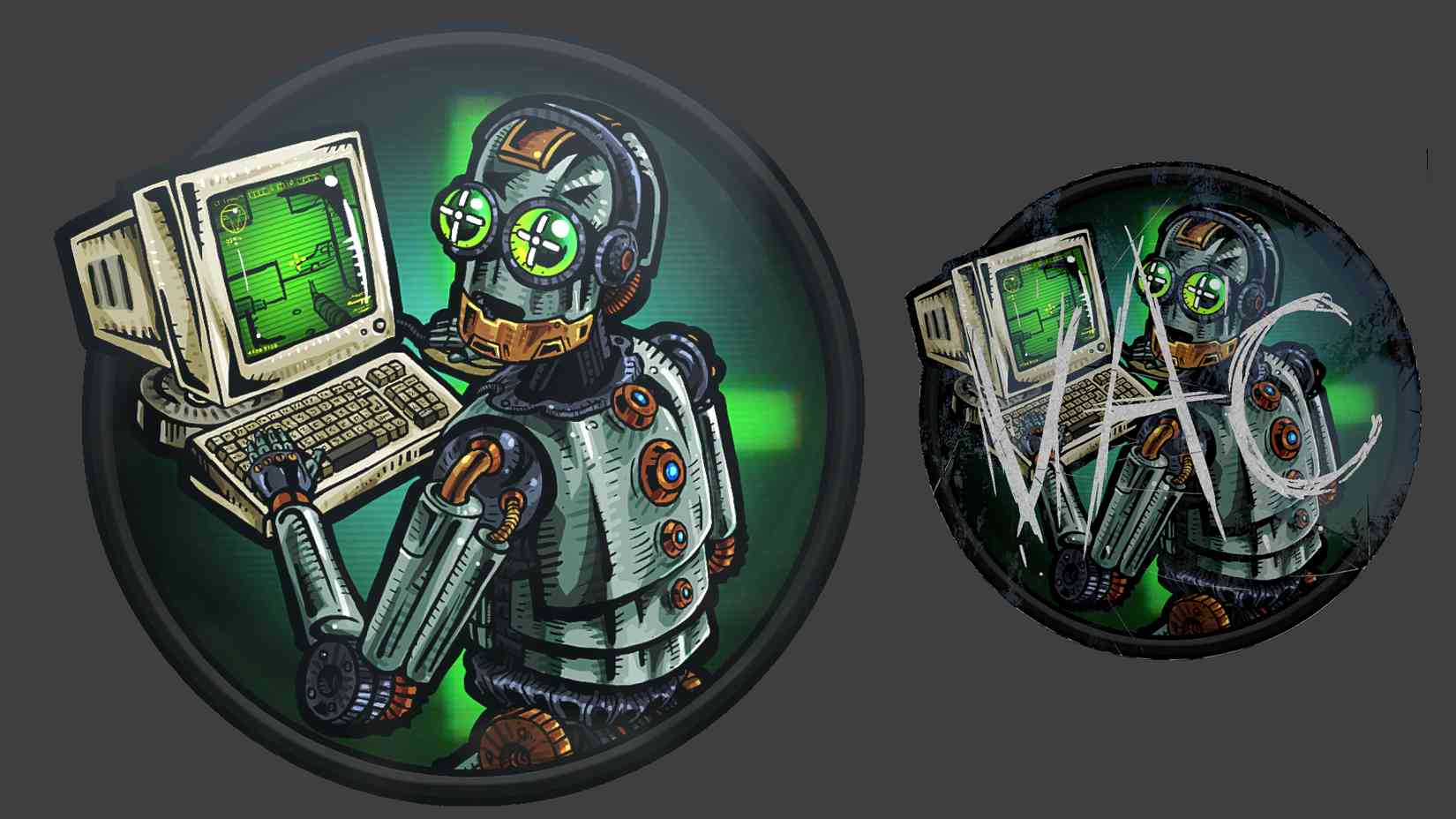 Every CS:GO player has encountered an enemy with a crazy aim who hits every headshot, which usually leads to an instant report.

A well-detailed design revealing the truth behind the crazy aim with a secret scrape gem showing VAC.

“It's based on the idea that people always say it wasn't them playing on hacked accounts and that a mad scientist has a robot playing on his account and getting him banned for hacking” - SLIMEface to BLIX.GG.

The artist “SLIMEface” has 14 skins in the game, including the Bloodsports AK-47, MP7 & SCAR-20, in addition to the GALIL-AR Sugar Rush & more. 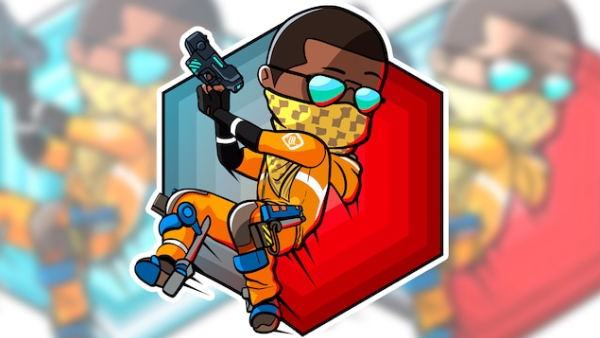 While Danger Zone failed to gain the popularity Valve hoped for, The update was certainly a remarkable event in the last ten years of the game, so this sticker had to make it to the list.

The sticker is a spot-on representation of Danger Zone. The hexagon back shape can be found in the original logo, followed by a cartoonish T agent holding the iconic Zeus.

When fully scraped, only the agent will appear, making it cool. 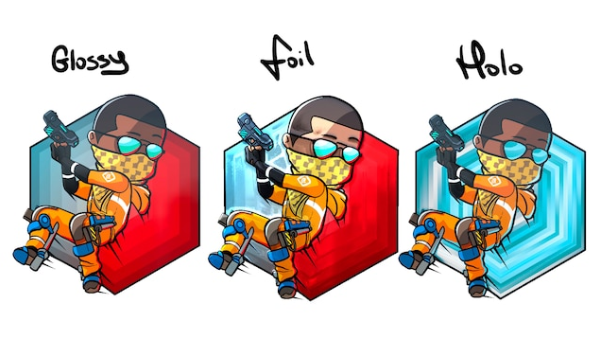 oKeyush (Sticker Creator): “I just wanted to draw a Danger Zone reference sticker. After all, this game mode appeared only in CS:GO. Well, Zeus in the hands was also drawn for this reason.” 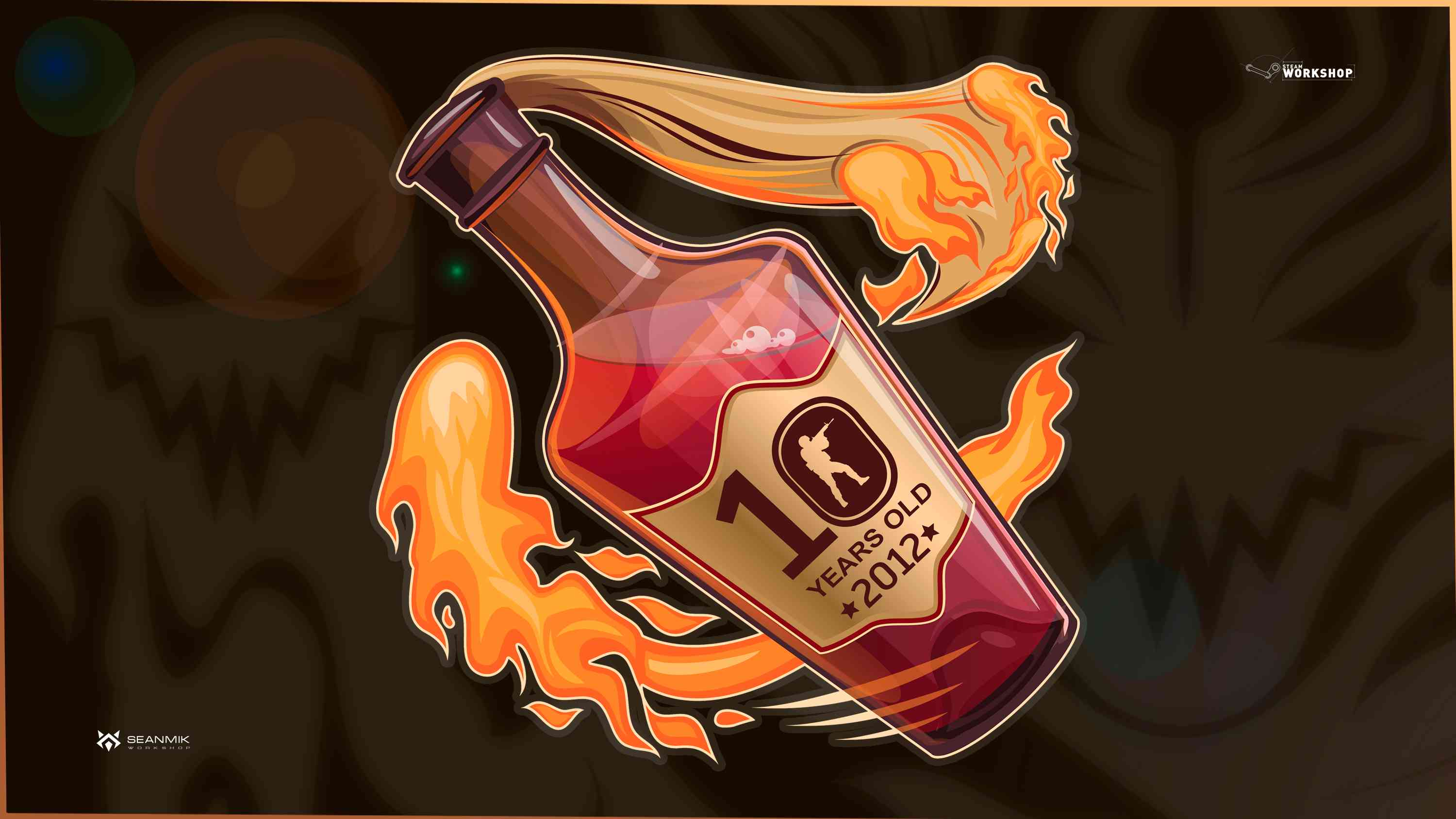 “One of the most important measures of great the drink is that it should be age-worthy, the rule of thumb is the older the vintage, the better it is supposed to taste.” - SEANMIK

The best way to celebrate the 10th anniversary is by popping a bottle of the finest fire to burn your enemies in-game. This art perfectly showcased creativity by fusing an icon in-game utility and celebration.

The sticker comes in regular, Foil, and Holo versions with a secret scrape gem showing what appears as evil spirits & souls.

“The basic idea was from Emil, in his words the idea came rather spontaneously, during the game in CS:GO when he in one of the rounds burned from that Molotov. He shared this with us and later the idea grew in details and adapted to the sticker for the contest #csgo10 As it says in the description (there's a story of the sticker), it should bring pleasure to your opponents.” - SEANMIK to BLIX.GG 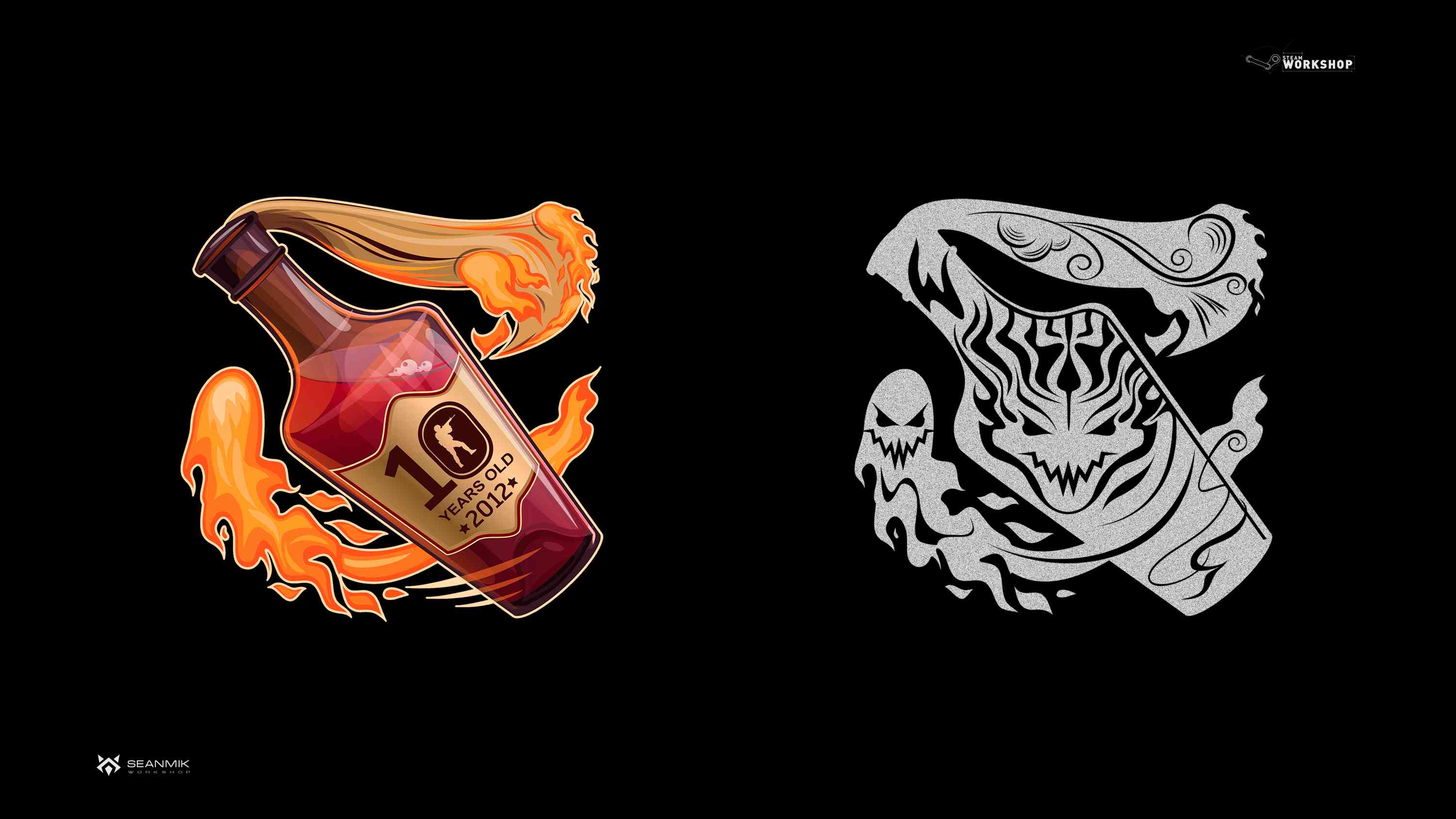 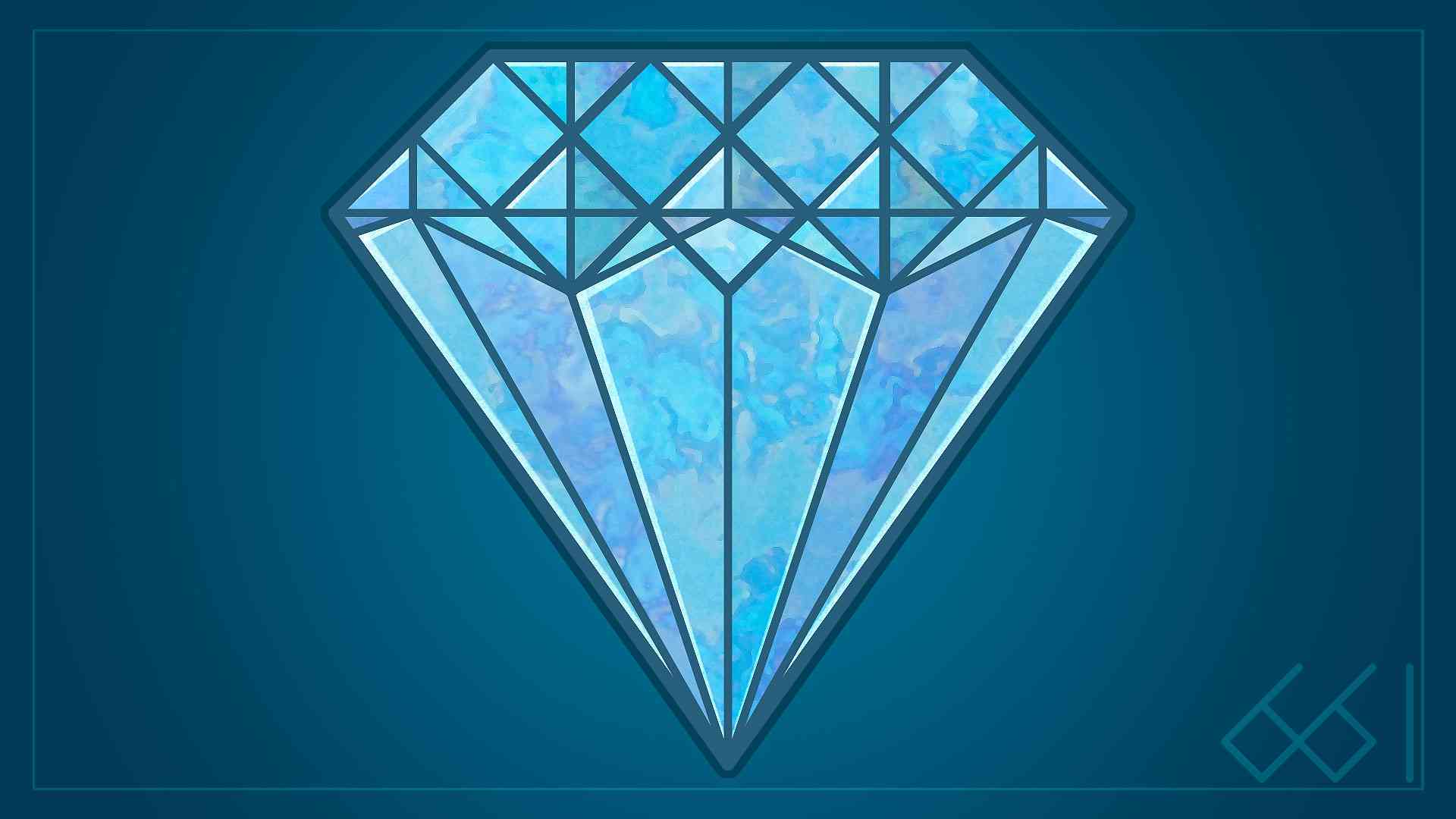 One of the best skins in the game, “Case Hardened,” has gained a massive popularity due to its “blue gem” rare pattern, and it’s currently the most expensive skin.

From a name concept to an actual blue gem diamond, The sticker even shows a hidden 661 number when scraped, representing the infamous “Scar Pattern.” Not only that, but according to “CptnKraken” & “b3d,” they incorporated the official Case Hardened pattern template as a texture on the gem's surface.

We designed this sticker with the special intention of it being applied to “Blue Gem” skins - but it is sure to make any craft look like a gem!” - CptnKraken & b3d 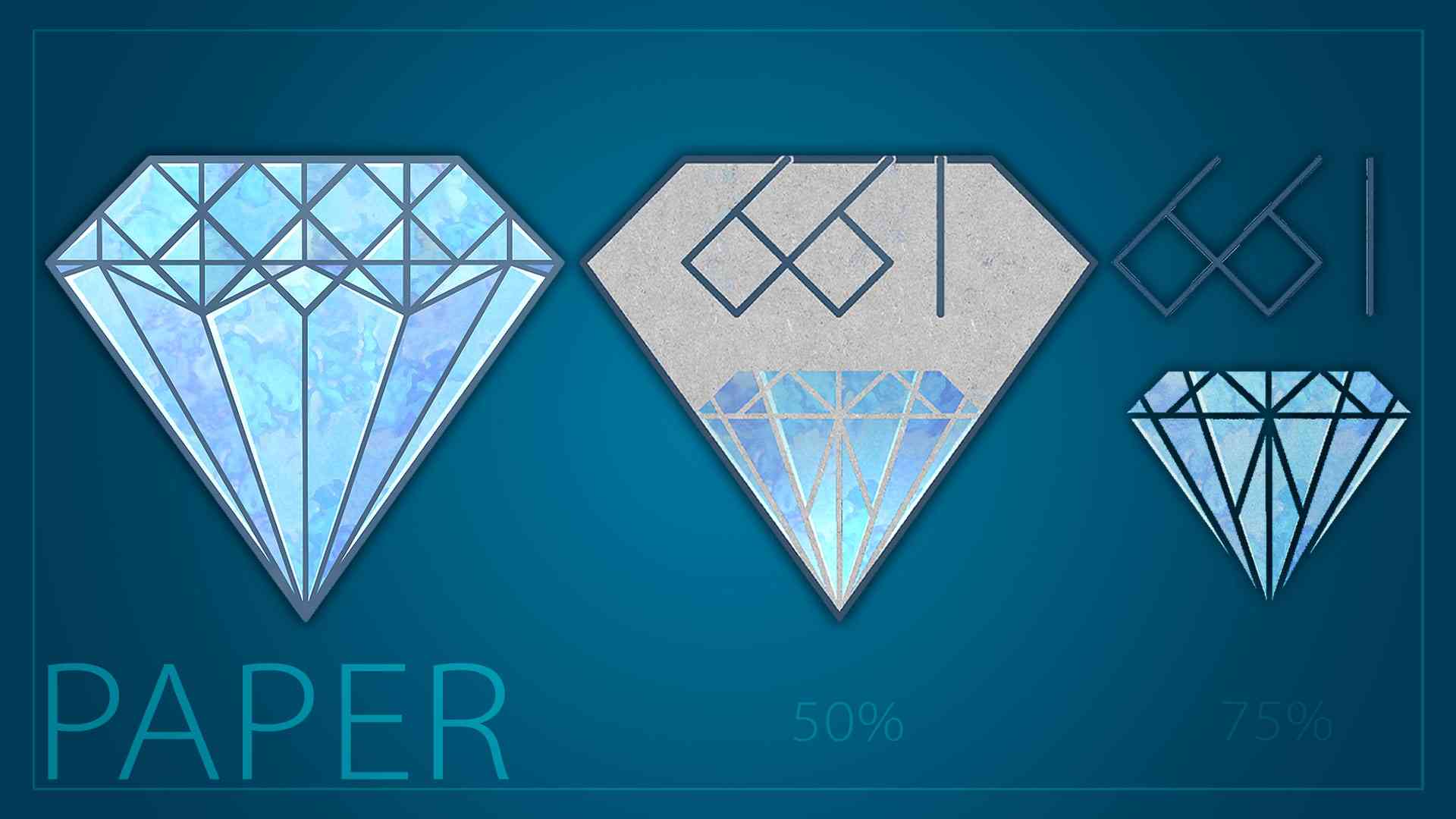 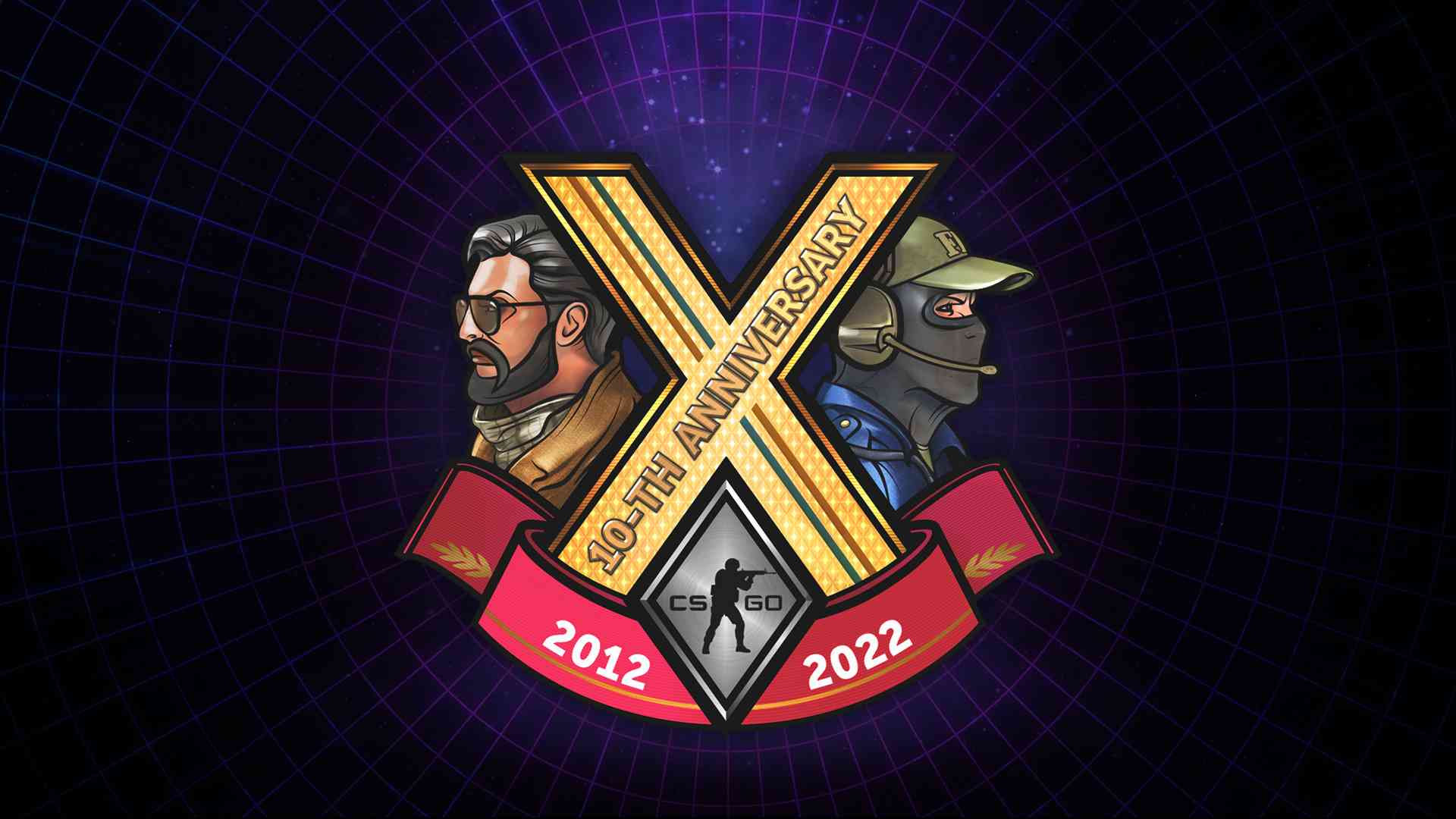 Terrorists and Counter-Terrorists have come together to celebrate their anniversary after years of fighting in well-made sticker by “chackfree.”

The agents are separated by a big golden (X) that represents the number 10 in Roman numerals and two colored lines representing both sides.

There are many stickers with the same idea, but this one stood out the most in many ways. 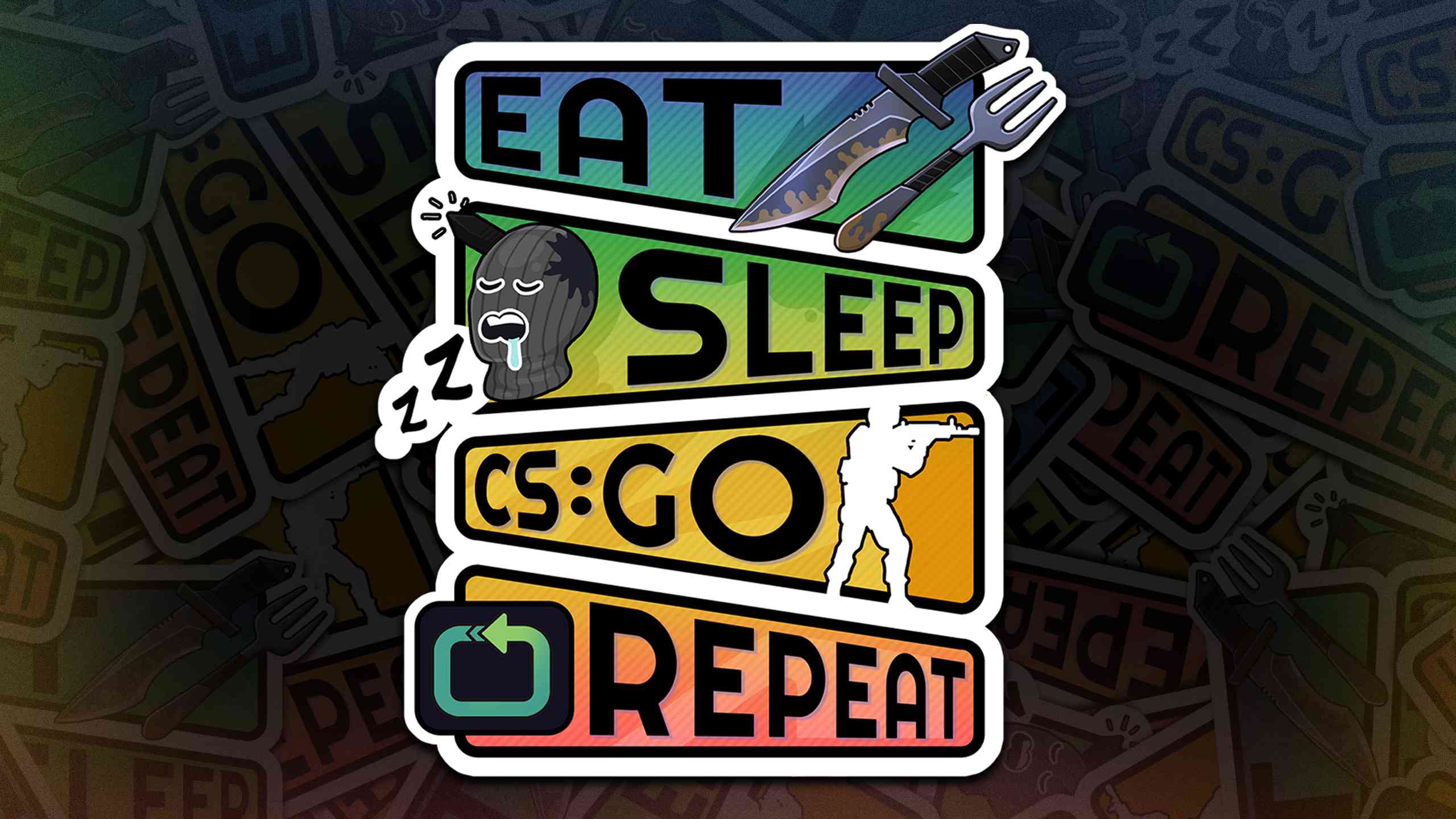 If the daily CS:GO enjoyer’s day was a sticker! It seems like they have the best life.

Even though the original Eat, Sleep, Repeat originated outside CS:GO, The creators of this sticker did an amazing job with it.

Artists nowadays like to add a little spice to the sauce by making secret scrape gems, even in this one. When scraped, only the third shape stays intact while the rest of the text on the sticker turns white.

The Foil version scrapes everything leaving only the CS:GO column. 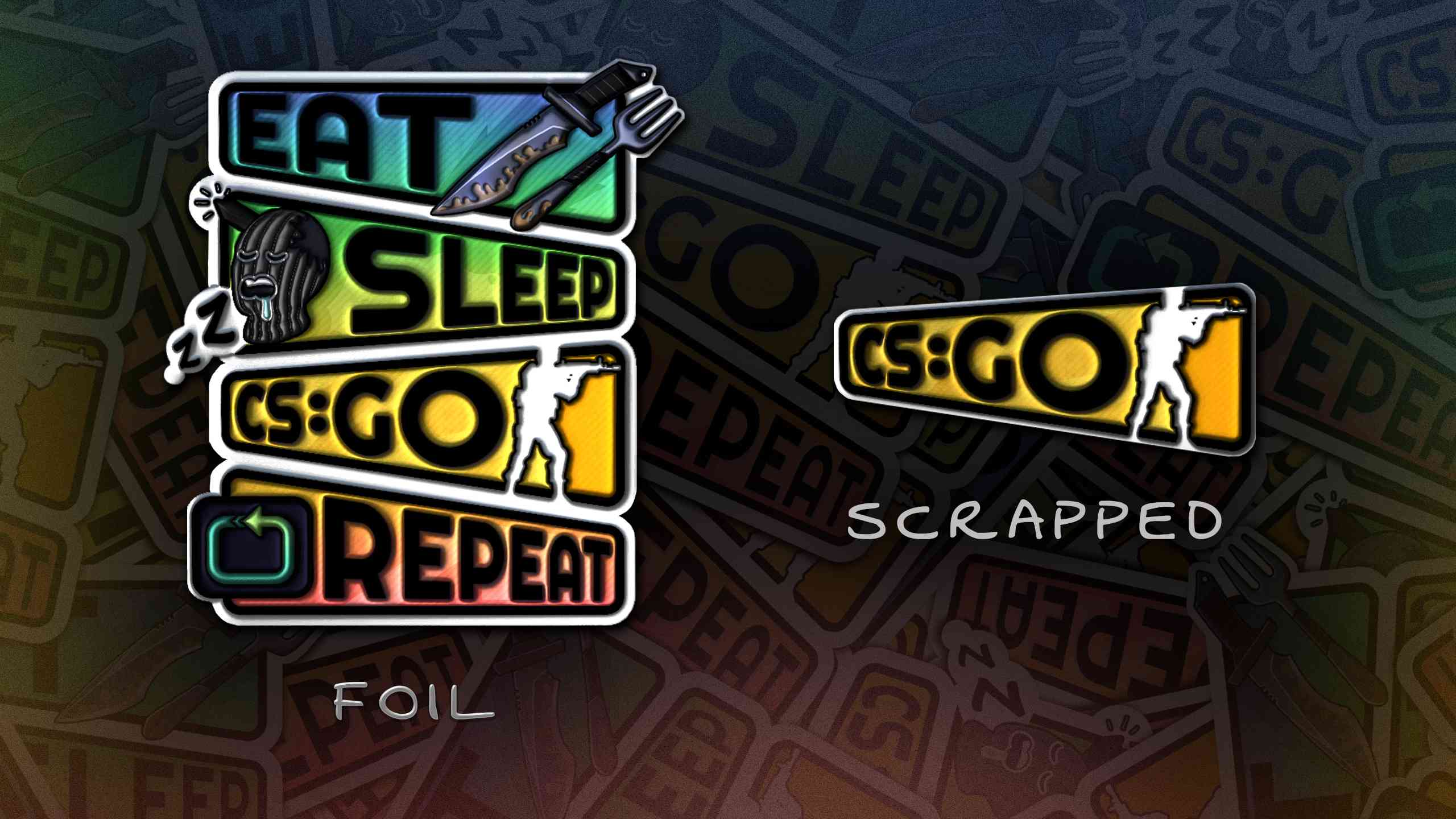 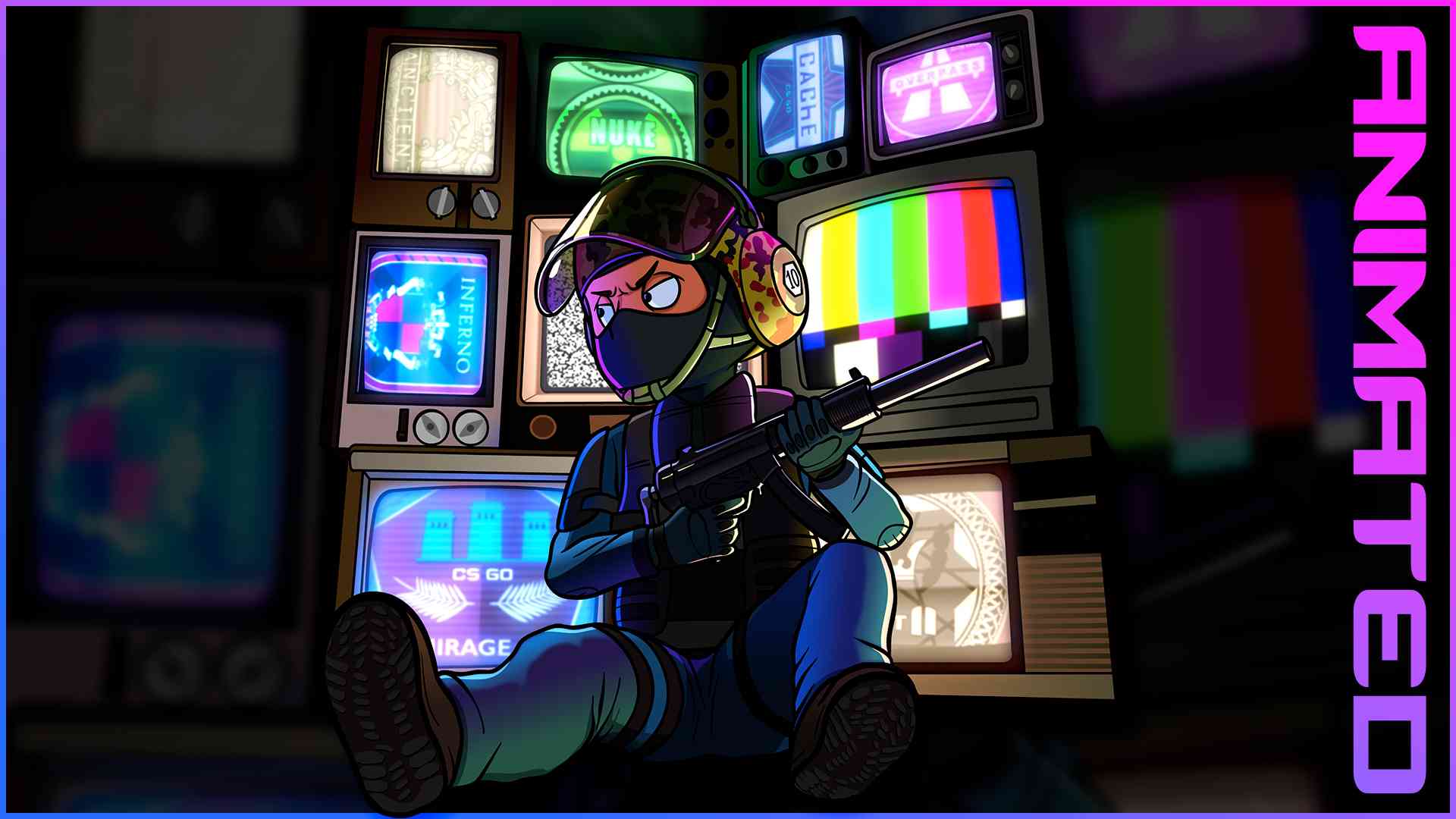 CS:GO maps are filled with TVs that we just like to shoot when passing by them, and this beautiful work of art showcases exactly that.

A CT agent sitting down with multiple TVs with map logos; when inspecting the Holo version, the TVs glitch, and a clear CS:GO 10 can be seen as a reference for the anniversary.

A well thought & designed sticker by “oKeyush” once again. 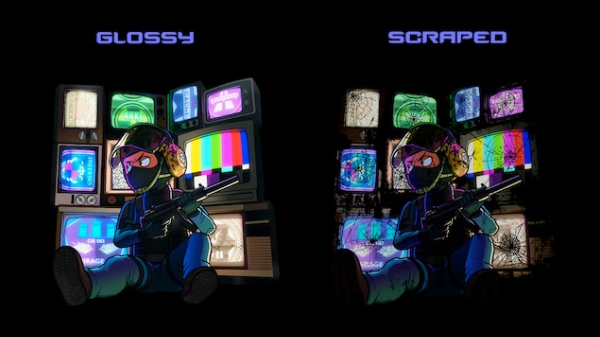 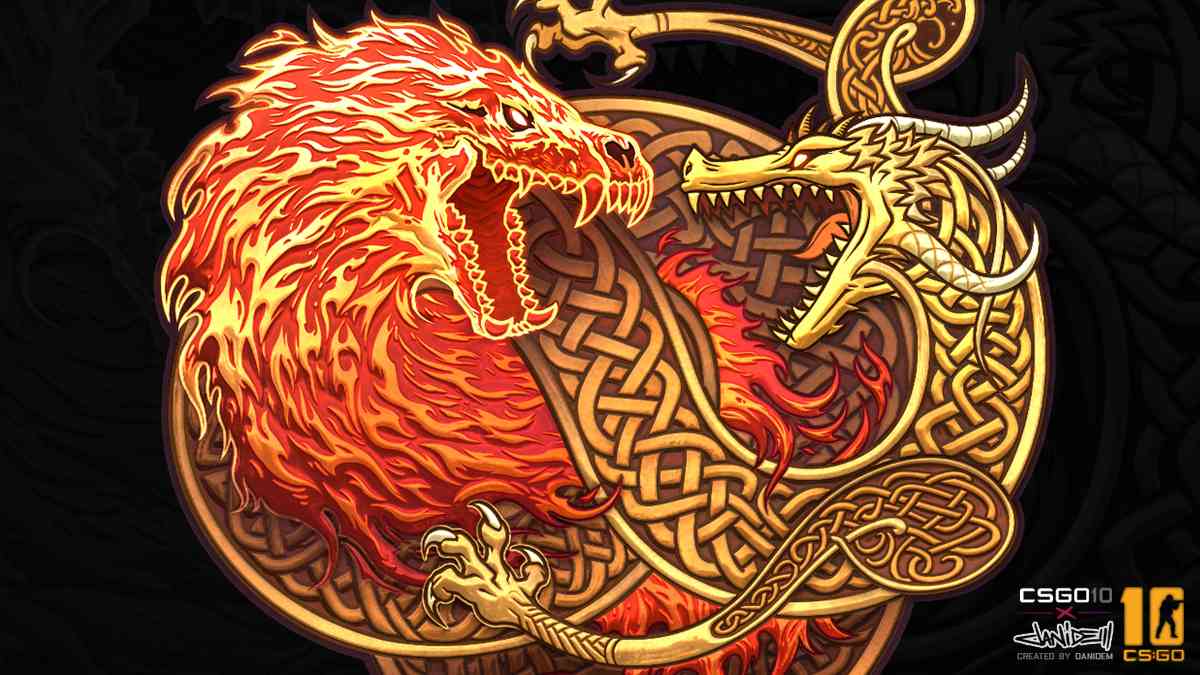 Howl & Dragon Lore are two of the most iconic skins in the game with crazy stories behind them, and when put together, they make this great masterpiece.

“I'm a massive Dlore & Howl fan and I felt like going for this one was taking on two of the most loved designs by the community, so I committed to it and I'm very happy about how it turned out!” - TheDanidem

Incredibly detailed sticker with the perfect color combination, This is definitely one of the best entries in this contest. While a decent amount of the community wished this particular one would be a pin as well. 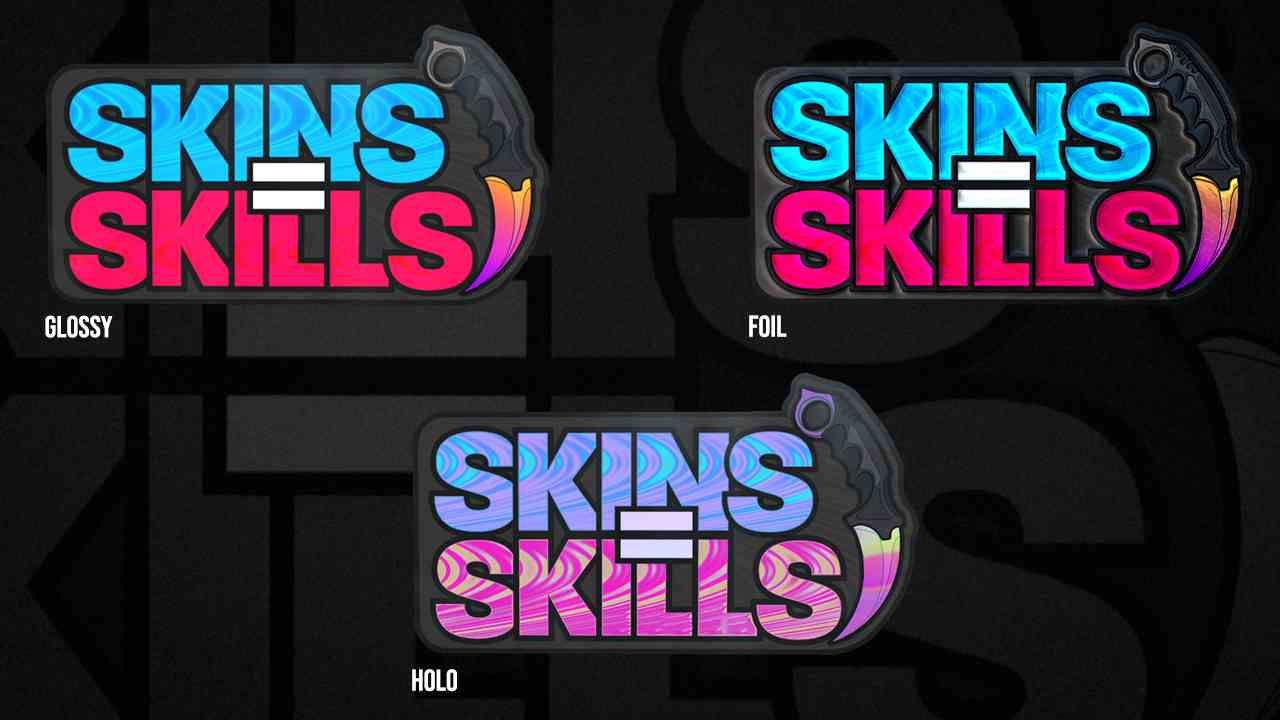 To end the debate, Skins do equal skills, and “moonfighter” exclusively told BLIX.GG, why?

“Skins=skills sticker, well, many times I've heard saying "skins equal skills," and that is TRUE! When you have a nice skin equipped, you feel way more confident in terms of gameplay, and it's not a secret. You may call it pay to win, but the only thing that changes is the color of your weapon and you gain a huge confidence boost! That's how that idea was born, and I tried to use flashier colors for people to craft on both, low and high tier skins.”

One thing for sure if this sticker ever makes it into the game, the crafts would be really good with such beautiful color combinations, design, and concept.