The most oppressive faction is full of removal, locks, and other no-fun-allowed tools. Playing Nilfgaard drastically reduces your chances of getting ‘gg’ after the game. But all the hatred towards this faction doesn’t change the fact that it’s simply strong.

Nilfgaard decks are one of the most difficult to pilot but allow for some crazy shenanigans. Although this faction is not newer-player-friendly it’s one of the best ways to learn the game. Assimilate archetype requires you to know how the enemy deck works so you can use it to your advantage.

By playing assimilate you effectively learn how to use every deck you face. However, there are plenty of other viable Nilfgaard archetypes like soldiers, hyperthin, poisons, or tactics so everyone should be able to find something that fits his playstyle. 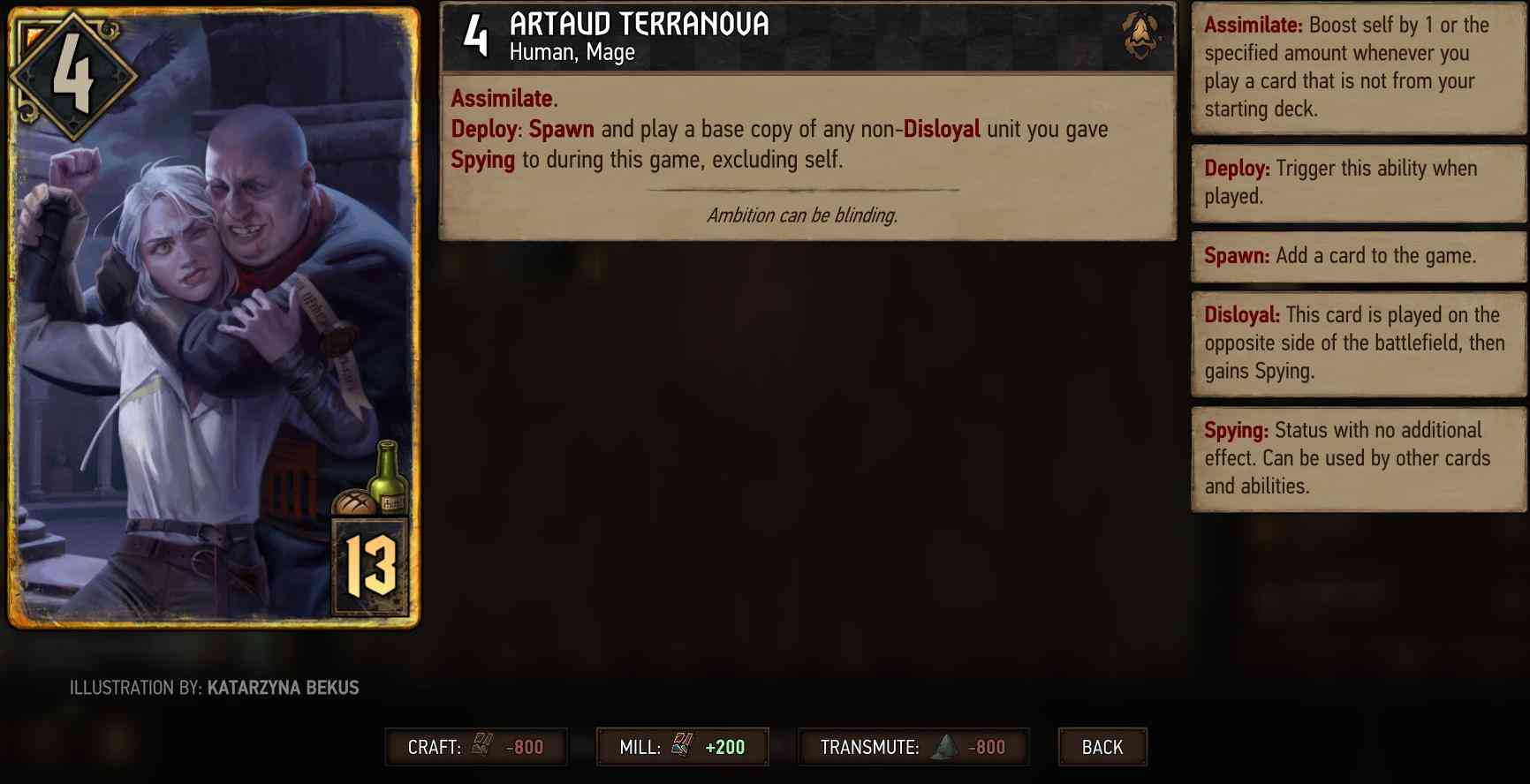 One of the key cards for the ‘I play your deck’ strategy. Artaud allows you to play any enemy unit as long as it received spying status during the match. This can be achieved through a variety of other cards like Emhyr var Emreis, Fercart, Treason, or Mage Torturer.

Artaud opens so many play lines it’s simply crazy. Just to give you a few examples — you can copy the enemy defender to protect your engines, you can use enemy She Who Knows for carryover or you can copy Simlas to play two of your specials in a single turn. The options are limitless and dependent on the enemy deck. One thing to note, the proper use of Artaud requires you to know enemy cards well so you choose the best and most valuable target to copy.

Another key card for using the opponent’s deck against him. It allows you to copy any enemy unit as long as the condition is met. So you either want to use it on a unit with spying or make sure to get a deathblow with your 3 damage which will have the same effect. Just like with Artaud this opens many paths and can work wonders.

The deathblow part is great in Nilfgaard decks that can do damage to weaken enemy units to the 3-power required for the deathblow. With the right setup and planning, you can virtually copy anything your opponent plays. And with echo ability, you can do it twice.

This card is designed for one purpose - to give you consistency. If you play it in round 1 it guarantees you to draw all your best cards as your deck gets sorted from highest to lowest provisions. You can utilize that to defend round 2 bleeds or go for swift 2:0 knowing you have all your best tools available to you. There are however some drawbacks to this card. The main one is - what if you don’t draw your Calveit round 1? It can be quite awkward as you just wasted 10 provisions for a card that plays for 8 points.

Luckily you can enhance your chances of drawing Calveit by putting tactics in your deck. Another risk of running this card is related to facing decks like the mill. You sort your cards from the best to the worst and now your enemy is wiping your deck in that exact order which is game-losing. But those are rather rare cases and usually, Calveit works great. Especially when played on a red coin so you don’t risk losing even due to his rather slow tempo.

Strong card with some great utility. It allows you to spawn and play any bronze soldier from your hand which opens many interesting options. It can be used on Alba Armored Cavalry for an extra lock, it can give you another Illusionist for that nice bonded ability or you can spawn an additional Ard Feainn Crossbowman.

You can even get another Ard Feainn Tortoise for a simple pointslam. Ramon is just a nice and flexible card that works great in many Nilfgaard decks. Just note it can sometimes brick if you end up with no bronze soldiers in your hand and playing 4 points for 10 provisions does not feel great. 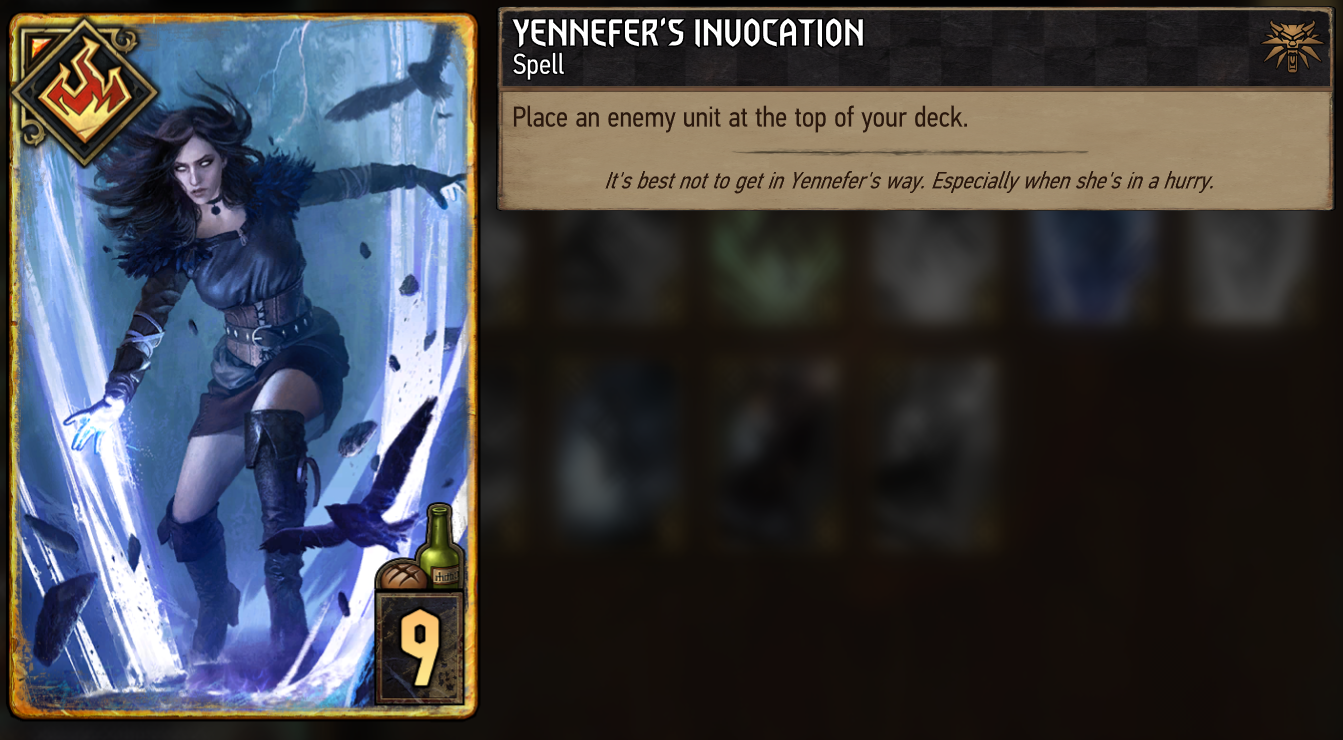 You can draw it naturally between the rounds, you can play it through cards like Joachim de Wett or tutor it with cards like Royal Decree, Necromancy, or War Council. Yennefer’s Invocation rarely struggles to find value and is a nice addition to any Nilfgaard deck.

Card with nice utility, mostly used as another tall removal. If played on a melee row, it destroys the enemy unit and summons the top unit from his deck to the battlefield. It has the potential to wreak havoc on enemy strategy if you manage to pull something important from the opponent's deck. If you are lucky, not only do you destroy a tall enemy unit, but you also effectively waste their strong deploy cards like Simlas, Fucusya, Renfri, or Igni which can be game-winning for you.

This card just plays dirty. The downside is, If the opponent is lucky, you pull a high-power unit without deploy ability but that’s something you have to consider when using this card. In some cases, Vilgefortz can be played on a range row which will destroy your unit and pull a unit from your deck. It has uses in hyperthin decks or when you put a high base power enemy unit on top of your deck with Yennefer’s Invocation.

A simple card that allows for some nice plays. You can use it to shuffle one card back to your deck to use it again (anyone who remembers double Masquerade Ball decks before scenarios were nerfed knows how powerful this card can be). But even today Assire can do some great things like playing Golden Nekker twice or using Stefan Skellen in two different rounds.

And in the worst-case scenario, you can shuffle back Roach for an instant 10-point play which is not that bad either. Assire can also be used to shuffle a card from the enemy graveyard to their deck which can be used to clog the opponent with bad cards. Assire is by no means an auto-include card but can work great in certain decks.

Lydia is mostly played in assimilate decks to proc your engines but her versatility makes her just a decent card. She allows you to play a bronze special card from the opponent’s graveyard or create a brand new one from his faction. If you know what your options are, she can find great value.

Just to give a few examples — she can look for Boiling Oil for removal/purify value, she can find Making a Bomb for moving row-locked units, and she can find Dryad’s Caress to purify poison. It’s not the easiest card to use but has awesome flexibility.

Consistency tool used in many Nilfgaard decks. By giving two points to your opponent, you can look at two of your random gold cards and play one of them. You want to use him in a late stage of the game, so you better know what your random options are. If there are only one or two gold cards left in your deck, you know exactly what you’ll get.

That’s the only downside of running Roderick — if you are forced to play him early, you might end up seeing two gold cards you don’t want to play yet. Also, remember to mulligan this card away if you already have all your golds.

After this card got buffed along with the soldiers' archetype, it is played in most Nilfgaard decks. And for a very good reason. Spotter offers great value for such a cheap card and the fact it can be copied with cards like Ramon or Slave Driver makes him even better. This card does a few great things besides giving you point value.

First of all, it gives you information, when you play Spotter, it shows you the top 3 units of the enemy deck. Not only does this give you general information about his deck, but it also informs you about the cards your opponent is going to draw. This can be useful when you try to decide whether to dry pass, bleed him or go for 2:0. Second of all, Spotter gives you information about the top units of your deck which is just as important.

And lastly, this card plays for some crazy value, as it usually ends up as a 10 to 12-power unit. What is even crazier — it has lots of armor (depending on the enemy unit you pick on deployment) and can be floated till the very end of the round to play around cards like Yrden. All of this makes Spotter one of the best bronzes in the game - at least for the time being.