The second qualifiers for the Gwent Open #3, Season 4 were held on August 27 and 28.
We saw some very exciting games with interesting decks brought to the table this time around. Meta has shifted and there were some surprises. Players were allowed to bring 3 decks on the first day of qualifiers. Matches were played in the best of three format.

A closer look at the decks on Day 1

Out of Forty-three players that checked in on Day 1 forty-one of them (95%) brought Syndicate. The only players that didn’t were UsedToBeRogbros and Vika73.

All of the Syndicate decks had Lined pockets as their leader, and decks were built around Golden Nekker and Ciri: Nova.

This doesn't come as a surprise since Syndicate, and more specifically, Lined pockets, have been dominating Pro rank since the beginning of the season more or less.

Twenty-seven players (63%) brought Scoia'tael. It was the 2nd most popular deck with 3 different leader abilities represented.Out of all the Scoia'tael decks, Sixteen players (59%) chose Guerilla tactics as their leader. Ten (37%) went with Deadeye Ambush, and only one (4%) player chose Call of harmony. Most players still believed that Guerilla tactics coupled with harmony cards and Simlas was a superior strat to Deadeyes Ambush; even though Deadeyes has started catching up to Guerilla tactics. Most of the decks included Heatwave, Oneiromancy, Simlas Finn aep Dabairr and Milva: Sharpshooter.

Twenty-four players (56%) ran the Nilfgaard deck. 100% of them took Imprisonment as a leader. Imprisonment only began gaining popularity late in the season, but it’s proven to be a strong deck. Renfri coupled with Triss: Meteor shower seems to generate a lot more points than you would think at first glance. It has a very good round one, and at least 5 locks, which is enough toshutdown most of the opponent’s engines.

Twenty players (47%) brought Skellige. Out of all factions, Skellige had the most diverse leader picks, with 4 different picks in total. Onslaught was by far the most popular choice, and out of twenty Skellige decks, fourteen (70%) of them picked it as their leader. Three players (15%) went with Ursine ritual instead. Reckless Flurry was picked by 2 players, while Patricidal Fury was chosen only once.Skellige is not the biggest threat neither in the ladder nor in qualifiers, but it’s still a solid control deck, and can take games against most decks when it’s built and piloted properly. Most popular key Skellige cards were Fucusya, Morkwarg: Heart of Terror, Korathi Heatwave, Crach an Craite and Renfri.

Fourteen players (33%) brought the Northern Realms to the table. 100% of them had Royal Inspiration as their leader. Only 1/3 of participants decided to go with Northern realms into the qualifiers; which probably came as a surprise to both players and viewers. Especially compared to previous qualifiers, where the deck was extremely popular. This time around they were 2nd to the last in terms of popularity.

Only three players (7%) brought Monsters decks this time around. And each one of them had a different leader. OKOGLAZ brought Force of Nature, pawloex brought Blood scent, and UsedToBeRogbros brought Overwhelming Hunger. Monsters took the biggest hit this season, with being poorly represented both on ladder and the qualifiers. As a result we expected to see them in small numbers. Maybe they will become what they once were in the following seasons, but for now, they’re definitely the worst performing out of all factions.

On the first day of open qualifiers we didn't see too many surprises, although we did see some very interesting matches.

Arguably the most popular GWENT streamer Spyro_ZA and one of the best and most loved pro players Pajabol ended up in 11th and 10th place, respectively. Both finished the first day with four wins and two losses.

Kerpeten didn't have an opponent in the first round of the first day, and therefore got awarded a win. He managed to squeeze between PepeSmile who ended up in first place of the leaderboard and Puzzle_Express who earned himself a spot in third place. Kerpeten ended his day with a score of four(+1) wins and 1 loss. His only loss came from PepeSmile, who had a great first day.

PepeSmile ended his day with an almost perfect score of five wins and one tie. His sole tie came from an intentional draw with Puzzle_Express. The reason being both had already gone through to Day 2, so there wasn’t any point in them playing one more match.

The only real surprise of the first day was that Bart966 didn't manage to win a single game; knocked out with a score of zero wins and three losses. Which is something few expected from a player of that caliber. 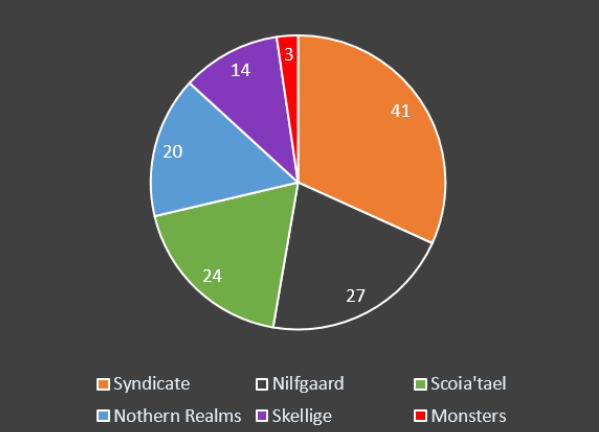 A closer look at the decks on Day 2

Out of all sixteen players competing, 100% brought Syndicate decks. And all sixteen of them chose Lined pockets as their leader. Just as on the first day of the qualifiers, Syndicate proves

to be the strongest deck in the current meta. Golden Nekker coupled with poison packages is almost an unstoppable force. The most popular cards in Syndicate were Decree and Roach that were placed in fifteen out of sixteen decks. Which shows that players valued consistency. Third most popular card was Kalkstein, he was put in fourteen lists.

Nilfagaard came second place, with fifteen players opting to go for the faction that achieved its resurgence late in the meta. Twelve players, 80% in total, picked Imprisonment as their leader. Three players 20% chose Double Cross instead. The most popular cards were Renfri, Vilgefortz, Roderick, Lydia and Braathens.

The Northern Realms started falling off more and more towards the end of the season. What was once a feared faction, has now found itself sitting fourth place in terms of popularity during the qualifiers. With only half of the players bringing it on the second day. It seems people have found ways to deal with this deck, and they even started directly targeting it with their lineups. All of the Northern Realms decks played had Royal Inspiration as their leader. The most popular cards were Amphibious Assault, Korathi Heatwave, Damsel in Distress and Aerondight.

Skellige shared a pick rate with Northern Realms. Half of the players brought it, but unlike Northern Realms, there were 2 different leader abilities. Seven players (88%) went with Onslaught as their leader, while only Gandalf0271 (12%) chose

Ursine Ritual. In most of the decks players included either Renfri or Golden Nekker.

Monsters saw a small increase in popularity compared to the first day, but it is still the least represented faction. Four players (25%) brought them on the second day, which was a small increase from Day 1. PepeSMile, Danirai and pawloex decided to bring Renfri Vampires, while magpie was the only one to bring Carapace Kelly this time around.

There were zero Koshchey decks, which was probably the result of the rise in popularity of Nilfgaard. There are just way too many locks for a Koschchey deck to be successful. However, even though Monsters was by far the faction with the lowest playrate, the faction won every single game they were played in.

On the second day, games were played in a best of five format and there were a couple of surprises straight from the first round.

Pajabol lost 3-1 to TreeofAogiri666 and was knocked out in the first round. TreeofAigiri666 won the first match with skojatel. In the next 2 games both players found their success with Nilfgaardian lists. Then, in the deciding game four, they played a mirror match of Northern Realms in which TreeofAigiri666 came reigned victorious, sending Pajabol packing.

Our second interesting game was between Dykyj_Kaban and magpie131. This game was quite distinct because both players decided to ban Scoia'tael. It was a back and forth battle, where magpie managed to win with his Monsters deck. But in the end, the deciding game was game 2; where they played in a mirror Syndicate in which Dykyj_Kaban managed to snatch a win from magpie131.

SpyroZA played against Puzzle.Express in the first round. Both players decided to ban their Syndicate decks. SpyroZA won the first game with Skellige against Nilfgaard, however he lost the next three games to Puzzle.Express.

Unfortunately for SpyroZA he had some really bad draws in two of those games and he couldn't do much to fix that issue. Allowing Puzzle.Express to advance.

PepeSmile’s run comes to a close

PepeSmile strolled through the first round without taking a loss, and it seemed he will continue his flawless streak from day one. But in the second round Kerpeten managed to win three to one and he sent PepeSmile home. Northern realms proved to be a good deck against PepeSmile's Double Cross Nilfgaard.

However, in the second game, PepeSmile kept playing with Double Cross, which proved to be a great strategy against the Imprisonment list. The score was 1-1 at this point. But PepeSmile still had a big task in front of him. He had to win with Deadeye Ambush elves, against Kerpenten's Onslaught and Imprisonment.

Both of those decks are very hard to play against as Elves, since they’re control heavy lists, plus have enough damage pings to deal with 3p elves and stop them from overswarming the field.

In the end, PepeSmile succumbed, with his journey ending to let Kerpeten96 through.

TreeofAgiri666 versus spellingbee proved to be one of the most interesting matches of Day 2’s qualifiers. All of the matches between these two were close and had very interesting lines of play.

In the first game spellingbee went with Imprisonment against Royal Inspiration. Then TreeofAgiri666 responded with his own Imprisonment list in Game 2, managing to tie the series.

The third and fourth games saw both players win with their Scoia'tael lists.

Spellingbee with his Guerrilla Tactics and TreeofAgiri666 with Deadeye Ambush.

These two were taking us all the way to the deciding Game 5 where Spellingbee was able to snatch victory with Skellige Onslaught against Northern Realms Royal Inspiration. In the end, score was 3 to 2 and spellingbee went through to the next round.

Our Upper Bracket saw Holdyr playing against spellingbee. To everyone's surprise, spellingbee decided not to ban Holdyr’s Syndicate deck, and yet somehow still managed to win all 3 games sending Holdyr to the lower bracket finals. Still, even though the score in the end was three to zero, the games themselves were pretty close and action packed.

The last match of the qualifiers was in the lower bracket, where Holdyr was matching up against Kerpeten96. Both players decided to ban Lined pockets. In the first game saw Holdyr playing Scoia'tael Guerilla Tactics against Kerpeten's Royal Inspiration. The game was fairly close, but Holdyr managed to get on top and take game one.

In the second game Holdyr played as Imprisonment, which proved to be one of the best decks of the qualifiers. He managed to get to 2-0 against the Skellige list of Kerpeten96. But in Game 3, Kerpeten won with his own Imprisonment list against Holdyr’s Northern Realms.

However, in the last and deciding game of the lower bracket, Holdyr managed to hold his own with Royal Inspiration, beating Karpeten96’s Onslaught with only 4 points. The result makes Holdyr the second player to secure his place at the Gwent Open #3. 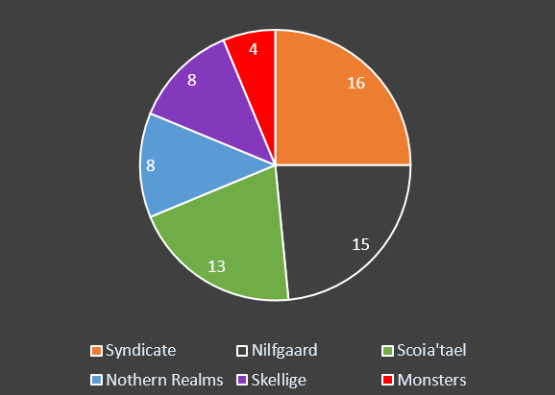 Chart of the number of decks brought on the second day of the qualifiers.
Discussions