SAL Kuede: “Knowing that we can play against these [NA] teams definitely makes it a nice eye-opening experience on the pitch.” 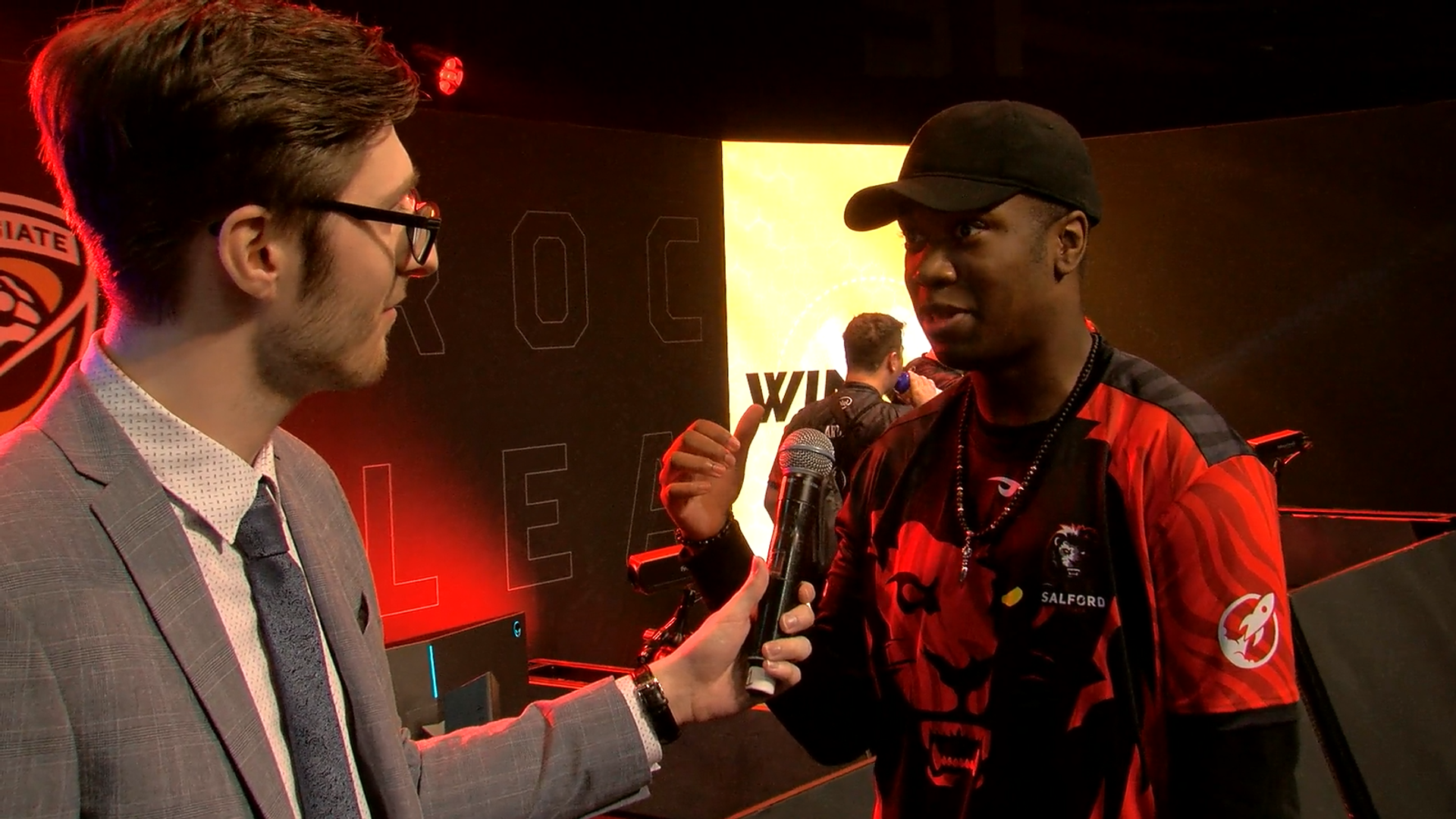 The inaugural Collegiate Rocket League World Championship was held in Dreamhack Dallas from June 3-5, where 16 universities converged to decide which was the best team around. Given that the collegiate RL scene was formed roughly five years ago, this event was seen as a watershed moment for its community which had overseen its development and development. Eventually, CRL allowed for the inclusion of European teams for the World Championship, with six teams making the trek across the pond and into the Lone Star State to take on NA’s best for the global crown.

Among the EU representation was Salford Lions, a British team that qualified by way of finishing second in the European Last Chance Qualifier. In the event, they finished third in Group A, having lost their Decider Match to St. Clair College 3-0, thus being eliminated entirely.

Pedro Romero: First of all, Kuede, commiserations on the series against St. Clair. It was definitely a pretty tough one to swallow for you. A clean sweep is not something any team would like to receive, but I'd like to know your initial thoughts on that match.

Kuede: Honestly, I'm proud of our team. I'm so proud of our team. We came back from a big loss earlier in the year. We lost a big player, and we had to get another sub player to become a main player, which was Arton (Patryk Szlachta), and Arton has been absolutely unreal. For this whole year, he's been very disciplined, and he's been so right as well. There's times where he'd be like the best player in the whole lobby, and it's just unbelievable. St. Claire has been a really good team to play against, and honestly, we had really, really good games against them. They played really, really well, honestly. I'm so proud of the team though, regardless of the loss.

You're one of the few European teams that managed to snag a win in this tournament, which led you to reaching this Decider Match. What was the team's atmosphere like in preparation for this match with a chance of progressing through to the playoffs on the line?

Before, in the comms, we always talk about, like, "We're not doing this for EU; we're trying to do this for ourselves as a team.” Obviously, we did it for the EU as well, but our first priority was ourselves. You always have to think about yourself, at least in this game. You want to be as good as you possibly can, so I said to my team, "No matter what happens in the game, if I own goal or one of us has a massive whiff, we're gonna make sure we come back; stronger mental regain." At the end of the day, regardless of a win or loss, the vibes are always good because we always talk it out and have fun. It's never too serious in the team. We never argue. We're all very open to criticism as well, so there's never going to be a bad situation with us at all since we're all friends.

By how you described it, instead of going into this tournament with a very focused mindset, you did so with a somewhat laidback kind of mindset?

It was more of a laid-back kind of mindset. I think the laid-back mindset actually helps us more as a team than having a super focused, super-fast, and calm type of mindset because, at the end of the day, the really focused and super intense type of environment sometimes makes us commit mistakes on the ball. We sometimes throw the ball away, and we sometimes panic and miss the ball, so I guess the laidback environment helps the team a lot.

Nevertheless, you guys bow out from this tournament and are now eliminated with this loss against St. Clair. Regardless, from traveling to Dallas, scrimming with teams, and enjoying the tournament, how would you view your overall experience in the CRL?

I didn't actually expect it to be this good. I've been to a couple of events among different things for maybe other esports, and this is probably one of the best events I've ever been to, and it has probably made me want to go to more events like these. It's honestly unreal. The atmosphere feels unreal. It's just a dream come true, and I definitely want our team to keep going because I'm definitely going to make sure I make it back here as well.

What's going to be your fondest memory of your time in Dallas?

My fondest memory... It's a bit weird to say, but the times when all of us EU teams were together and all of us just had a good time. It wasn't even Rocket League-related, but we're all really good friends. We all get along really, really well together. I think my best memories are going to be all of us together having dinner, just talking, and having fun. I will definitely cherish more of the time together as a UK slash German RL brand other than just having those moments on the main stage. And being on stage has to be up there because that was my moment to show who I am made of. I'll definitely say there are two moments I will remember the whole way.

With this being the EU's first taste of facing international competition, I'd like to know your perspective on the difference in skill between that and NA. Is EU really that ridiculously far behind, somewhere in the middle, or somewhere close behind?

I don't think the skill gap is actually that big, honestly. I think the skill gap is pretty close. The thing about the US teams is them having a lot of experience because this is the first time we've been in CRL. We've just been playing EURC before all of this. We've played all those other tournaments for university. Knowing that we can play against these teams definitely makes it a nice eye-opening experience on the pitch. I think the only thing we EU teams can get from out of this is just experience. The skill gap isn't that huge between the teams from NA and the teams from EU, in my opinion. I just think it's all experience-based.