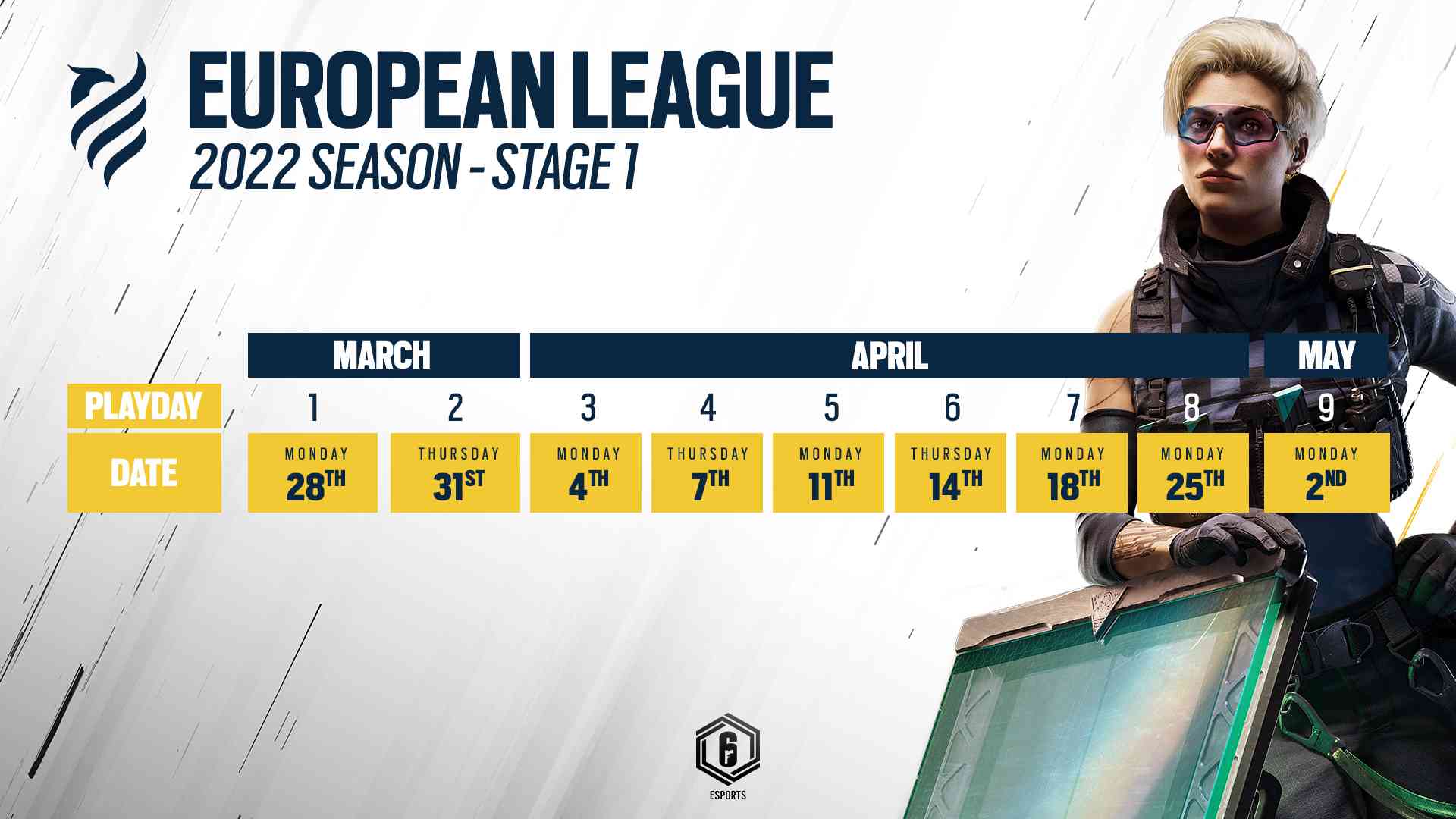 Welcoming the ten teams of the EUL's Stage 1

After a long break, the official Rainbow Six Siege esports season is finally back; congratulations to all of us! The teams had enough time to relax since the Six Invitational, to make transfers (and some were even too dramatic), and now they are charged for the battle to get to the first Major! So let's figure out what to expect from the first stage of the R6C EUL.

Brief introduction: The European League starts on 28 March and ends on 2 May. This month, ten teams will play among themselves in the single round-robin league format, all matches to be Bo1. In the R6S league, the scoring system is a bit non-standard: win gives you three points, overtime win counts as two points, and overtime defeat gives one point. The league's prize pool is 50 thousand euros, but this is not even the most important: the first four places receive guaranteed slots for the Six May Major and vital Six Invitational Global Standings points.

Let's move on to the teams. These ten participants will compete for prizes:

Reminder: Team Empire and Virtus.pro as organizations were banned from participating in R6S EUL, but their players are allowed to compete as mixes. Read details.

Here come the title-defenders. BDS was outstanding in the regional league since 2020, not getting silverware only at EUL 2021 Stage 2 (placed 4th). Unfortunately, they lost the Group Stage and placed bottom-3.

The team didn't make any changes during mid-season, so the French brigade will likely thrive once again to show the best of Siege and please the fans. Therefore, they are highly likely to win the league or at least finish second. Indeed, if they shook off the stress after the SI2022, gathered their strength, and are ready to prove themselves again.

G2 Esports are the wild card

With G2, the situation is as follows: the team has been producing far below expectations lately, resulting in three players being substituted. Hungry and Jonka were moved to inactive, while Kayak went to play for Natus Vincere.

Karl "Alem4o" Zarth, Jack "Doki" Robertson, and Kevin "Prano" Pranowitz came instead, with the latter taking the captain's armband. Karl and Jack are promising players who can shoot well and know the game decently. On the other hand, Kevin is a dark horse, and the first season will be a big test for the team's new IGL.

However, Derry "Dezachu" Holt highly appreciates the team's chances, placing them on a par with BDS.

Exclusive Dezachu's Prediction:
Favorites... BDS and G2, no doubt. BDS has been good all last year, G2 have the new "super team". It HAS to work. MnM I predicted to finish 3rd. I think they've got the formula right to go big. Very much a poor man's "TSM" in terms of structure if you ask me!

Heroic came on the scene in September 2021 and failed to show anything special. The results were not impressive, and the management decided to replace everyone. A complete update for the team: new manager, coach, analyst, and five players. Looks risky?

Not really. Heroic signed the cowana Gaming gang except for the experienced ex-G2 player Aleksi "UUNO" Työppönenm, who became the IGL for the squad. On paper, the roster looks intriguing, at least: there's the chemistry and experience is balanced with youth. However, it is not clear whether they will be able to realize themselves because earlier cowana Gaming primarily finished in the last places of the league, although this season, they almost made it through the Closed Qualifiers for SI2022.

The team generally has something to show, but it is unclear whether they can do it in such a competitive environment.

Looking For Org's chance to… find an org

Team Vitality disbanded the R6S ​​roster in February of this year, and for a good reason: their results were not very impressive, and their new strategy declared that they "believe winning in the long run at the very top level requires a permanent focus and high intensity [so] we will be concentrating on a selection of top-level esports that offer the best conditions to execute our strategy", which means no Rainbow Six Siege.

But the players did not give up. The entire squad, including the coach, analyst, and manager, now plays under the LFG tag in the European league, replacing only Kaktus with Mowwwgli.

There are no high expectations for this French-speaking line-up, but imagine what kind of a fairytale story it would be if they succeed and get signed by a major organization?

These days NAVI is not looking like a serious threat. However, the team has seen some drastic changes with two coaches transferred to inactive and no one was signed to replace them (which is very strange), and two players were kicked, including Doki, one of the best in the team. Sounds chaotic.

Both rookies, Kayak and Thunder, will be under a lot of pressure. The first will most likely take over the reins of a playing coach because who else, if not an ex-IGL, will manage? Fortunately, experience allows. But the second will be obliged to pull the team on himself, although Pedro did not particularly shine before that.

Rogue can make it

Rogue is systematic and precise. As an organization, they are consistently evolving, finding success here and there, picking combinations, and looking to a brighter future.

After a less-than-impressive performance at SI2022, they replaced two weak links (as of their point of view), signed talented players (balancing experience with a wildcard), and are ready to continue to fight in the middle of the table with the hope of grabbing a star from the sky. And although Deapek can't boast of top-tier success, Kantoraketti, the second rookie, is an ultra-experienced player at his 23 years of age with many titles in his pocket (including winning G2 at SI2019 and medals at Majors).

Rogue has more than enough power for a successful performance this season, so the top half of the table placing is expected.

MNM Gaming need to prove themselves

For MNM, the situation regarding the results is approximately the same as for the above-described Rogue. Still, with a caveat: an average line-up is expected to struggle in the middle of the table, and they can get to the Major with a bit of luck.

The only difference is that the MNM did not make any changes, which means there is faith in the roster, and the results satisfy the top management. Well, now we just have to see what happens next for them. Reminder: they escaped the relegation last season together with Team Secret.

Team Secret is confident, but should they be?

Team Secret's Rainbow Six Siege squad did not qualify for the SI2022 and performed poorly during the previous stages of the 2021 European League. After Stage 3, they somehow managed to stay among the big boys, taking the last place in the group.

The team released its analyst but did not make any changes in the composition. To be honest, one should've expected significant changes with the game they showed, especially considering how many decent free agents there are on the scene now. But nothing happened. I can't expect much from them, most likely to fight for survival once again.

Since Team Empire has been suspended from participating in the EUL, players, and staff will compete in the league under the PWNZ tag. And well, they're worth following.

Team Empire took second place at SI2022, and their play has been great, so why was the line-up so rebuilt and the main stars - Dan and Joystick - kicked? The players said that there are no hard feelings between them and the organization, and it's believable, to be honest. According to some reports, such dramatic changes are connected with the following: the management finally realized that it was time to move from the "stars drag the club" logic to the "club builds the system" strategy and hires a coach, Oleg "RayzerGM" Kuchin. The players disagreed with the newcomer's ideas, so updating the roster in a calm tone was decided. By the way, before joining the team as a coach, RayzerGM was Empire's… Social Media Manager.

From here comes the main question for PWNZ: will they be able to implement the very new ideas of the coach, and will it work out better than just having a starred line-up possible of taking the highest places only by their skills? The team is still pretty strong on paper, though, with ex-VP players added to the squad. But only time will tell.

As with Team Empire, Virtus.pro as an organization has been removed from the league, but players will continue to play as the Outsiders mix. Profound changes have taken place in the roster; some inactive players have returned to the main roster, while a couple of leading players have moved to Team Empire; they have also signed two newcomers and a coach.

Now the Outsiders do not look like outsiders at all. They could well compete for the top spots given the skill of the team's players and with a few variables added. Rask and P4sh4 should get back to the previous level without any problems, and the rest of the players will follow them. However, there are no high expectations.