The Sheriff is known for its one-shot kill capability. The only pistol in the game that can do so, making it a top choice for purchasable pistols for pros and nonpros alike. In the recently concluded VCT Champions 2022, the Sheriff was used 989 times. While the next most used pistol was the Ghost, used 923 times. Being one of the most used guns in the game, Riot knew to release several high-quality skins with different effects and animations for it. This article will list the current five best Sheriff skins in VALORANT. Taking into account their price, animation quality, sound effects quality, and overall design. 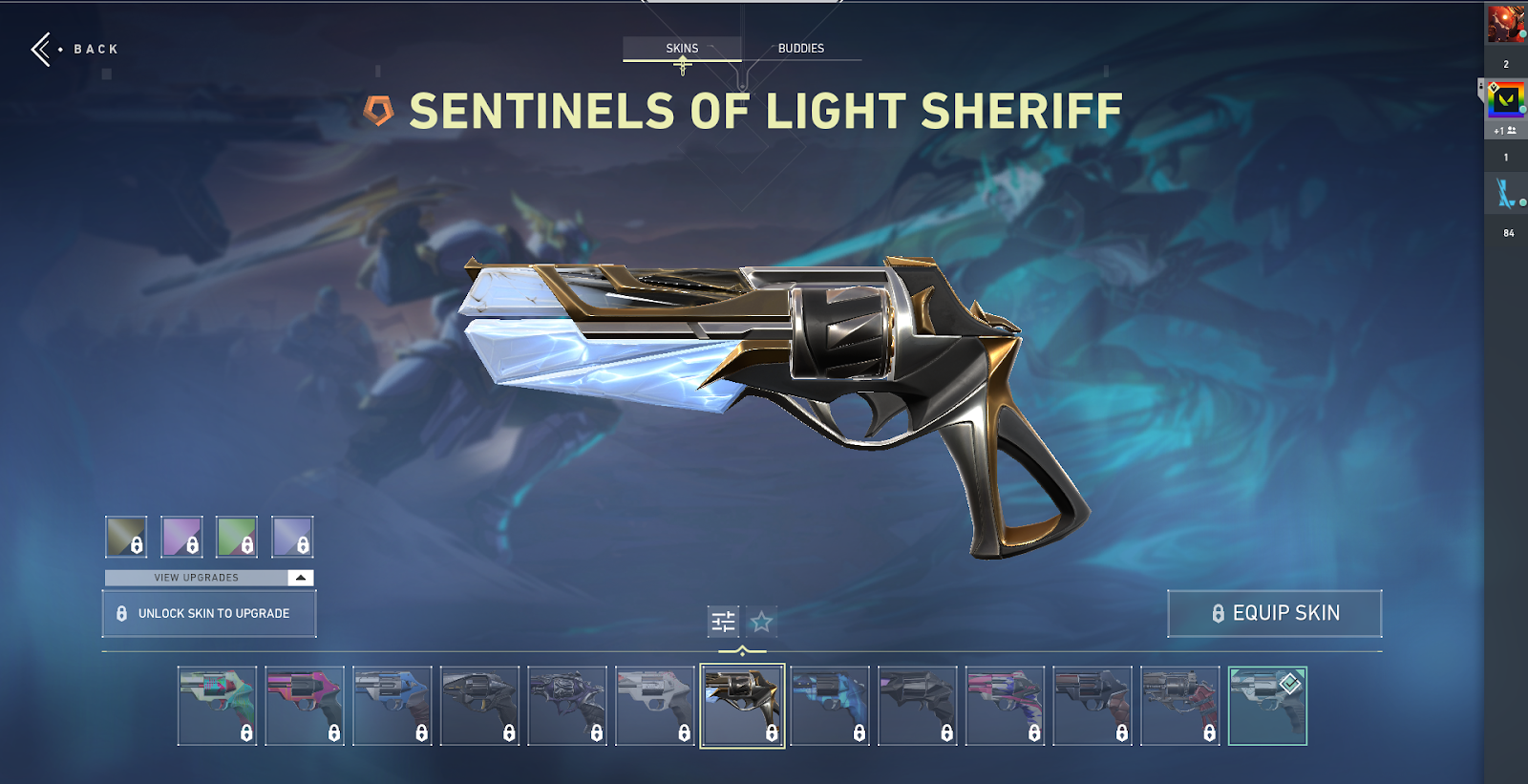 The Sentinels of Light skin for the Sheriff features a white, feather-like design along the barrel

This skin comes with four color variants, and 3 levels of upgrades. It includes visual effects, sound effects, weapon animations, and a kill animation/finisher. The skin's main attraction is its unique and well-liked reload animation. Its “pull out” also called “equip” animation is also widely considered to be among the best in the game.

The skin can be purchased once it appears in your daily rotating shop or your Night Market. Since the skin is an Exclusive tier skin, it will cost 2175 VP or about 25$ USD. 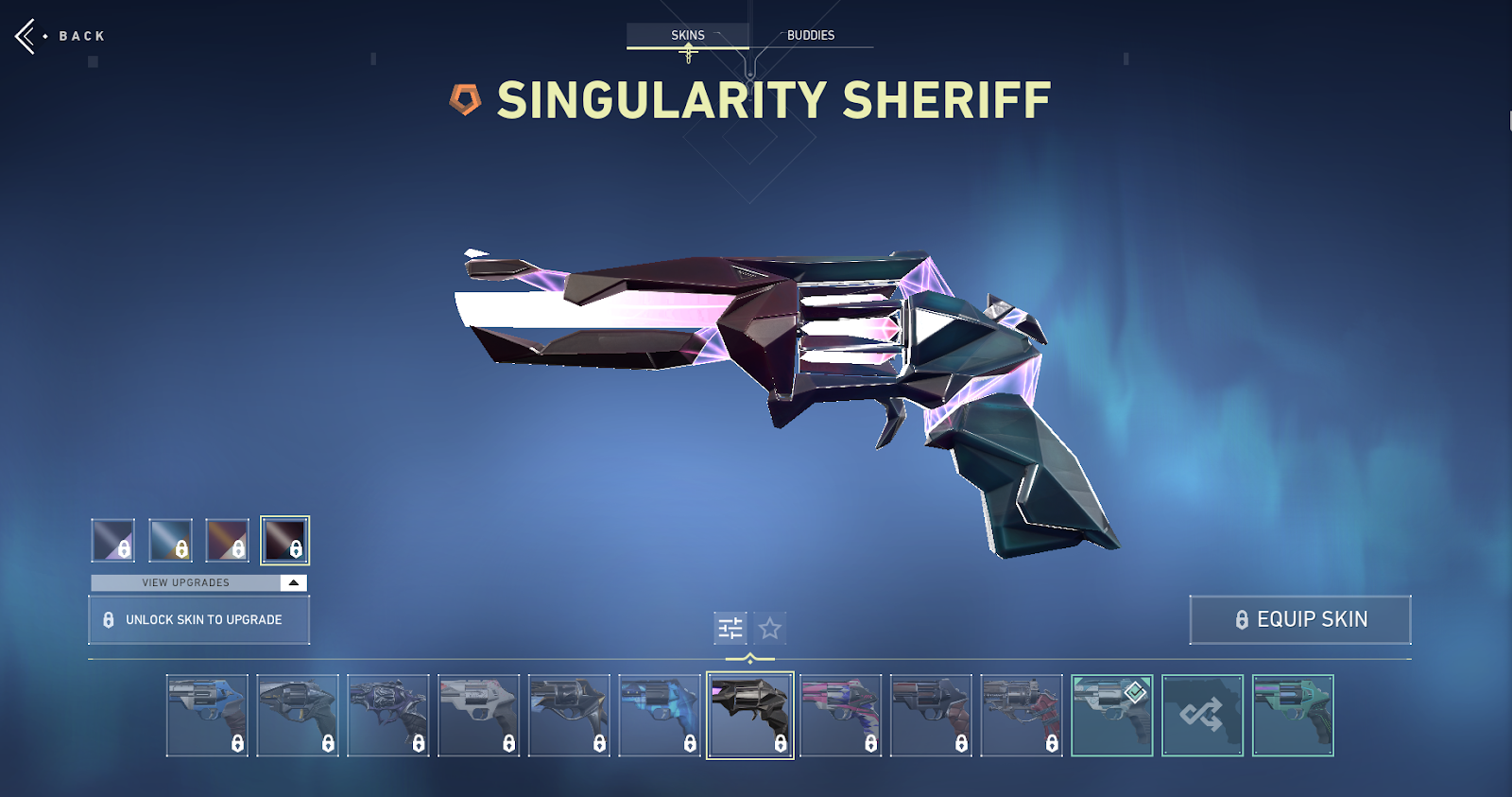 The Singularity Sheriff is one of the oldest weapon skins in Valorant, iconic for it's crystalline aesthetic

The Singularity collection was one of the earliest Exclusive tier skins released in the game in October 2020. Yet, it is still loved even in 2022.

The skin can upgrade three levels up to level four. These upgrades include visual effects and sound effects, weapon animations, and a kill animation and banner. The skin’s main attraction is the pulsating black hole within the weapon. This black hole has several great-looking interactions when shooting, inspecting, or reloading. Overall, the four variant choices combined with the skin’s high-quality animations and effects have made this one of the most loved Sheriff skins in Valorant. Its gunfire sound effects are also among the few that many consider better than the default sound effect.

The skin can be purchased once it appears in your daily rotating shop or your Night Market. Since the skin is an Exclusive tier skin, it will cost 2175 VP or about 25$ USD. 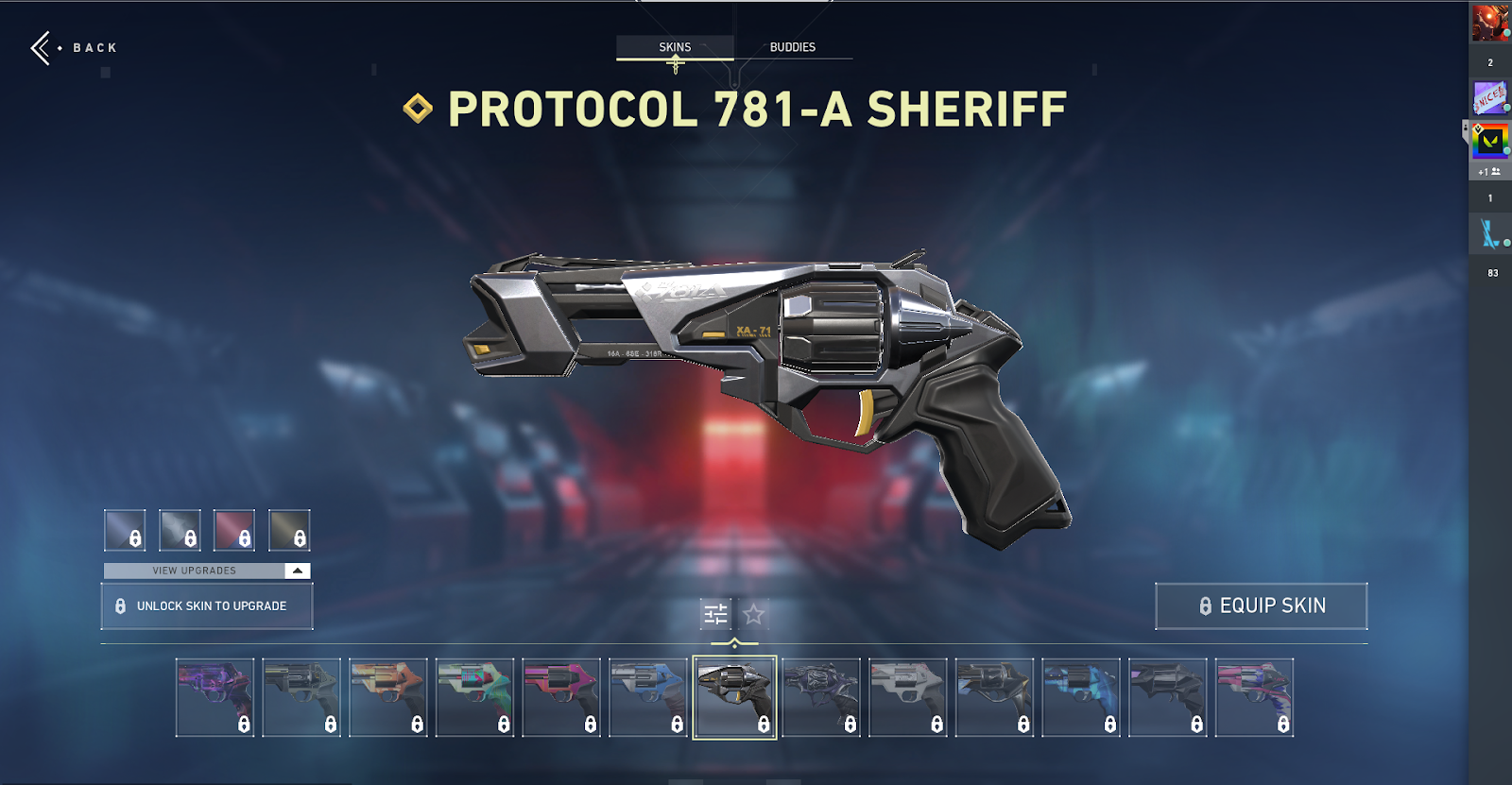 The Protocol 781-A Sheriff is a classic Valorant skin, sleek and compact in gunmetal grey

The Protocol 781-A Sheriff is the only Ultra tier skin in this list. Having only been released in early 2022, it is also part of the only skin collection in the game that can talk. That’s right, the Protocol Sheriff can upgrade a total of four times. Apart from the main upgrades - visual and sound effects, weapon animations, finisher and kill animations, the skin can be upgraded a fourth time to unlock its voice-over feature. You can now play Valorant and have your gun talk to you at the same time. The “robot dystopian” themed skin comes in four variants, with the White/Pink and Green variants using a female voice, while the default and Red/Blue variants use a male voice.

The skin receives its top three ranking as it is one of the unique skins in the game. Of course, it is also of high quality to go along with its uniqueness. Thanks to its transformer-like pull-out animation, its futuristic and captivating finisher animation, and of course the voice-over feature, it has become a top choice for several players.

Being an Ultra tier skin, the Protocol Sheriff is the most expensive skin on this list. It costs 500 more VP than the previously mentioned skins, but it may be well worth it for all the features you get with the skin. 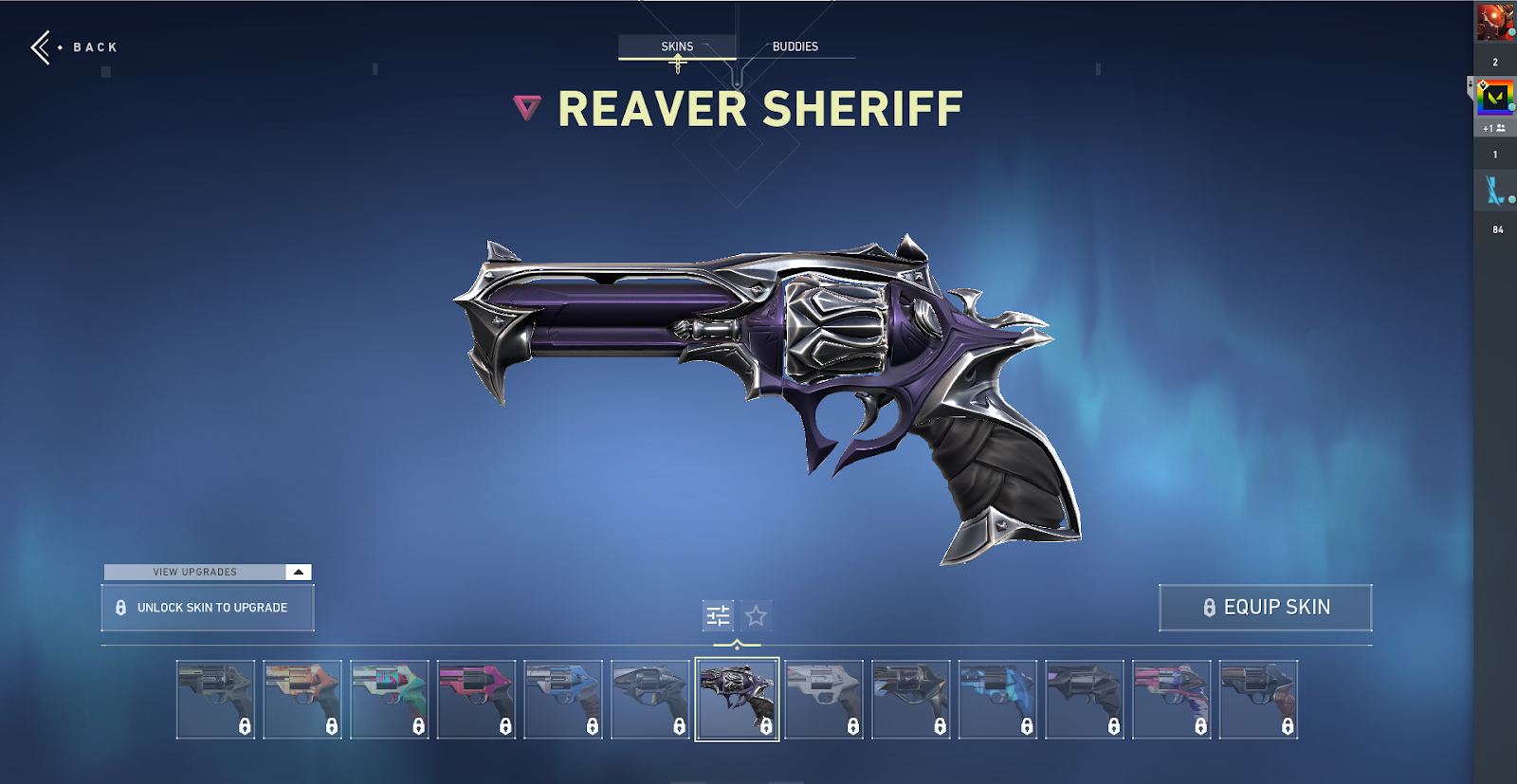 The Reaver Sheriff is nearly as old as the Singularity Sheriff, and it is also the cheapest skin among the 5 on this list. The Reaver collection is one of, if not, the most loved skin collections in the game. There’s a high chance to find Reaver skins both in pro matches and in your matches due to how long it's been out, and how much people love Reaver skins. Despite it being the cheapest skin on this list, it has still made its way to second place on the top five list.

Apart from its wonderfully designed aesthetic and model, it has one of the most satisfying gunfire sound effects, and kill sound effects in the entire game. Though it does not have an over-the-top, or “big” animation, the simplicity in both its idle and reload animation may be its specialty. This could also be its deal-breaker or deal-maker.

Being a Premium tier skin, the Reaver Sheriff will only cost you 1775 VP or 20$ USD. The skin can be purchased once it appears in your daily rotating shop or Night Market. 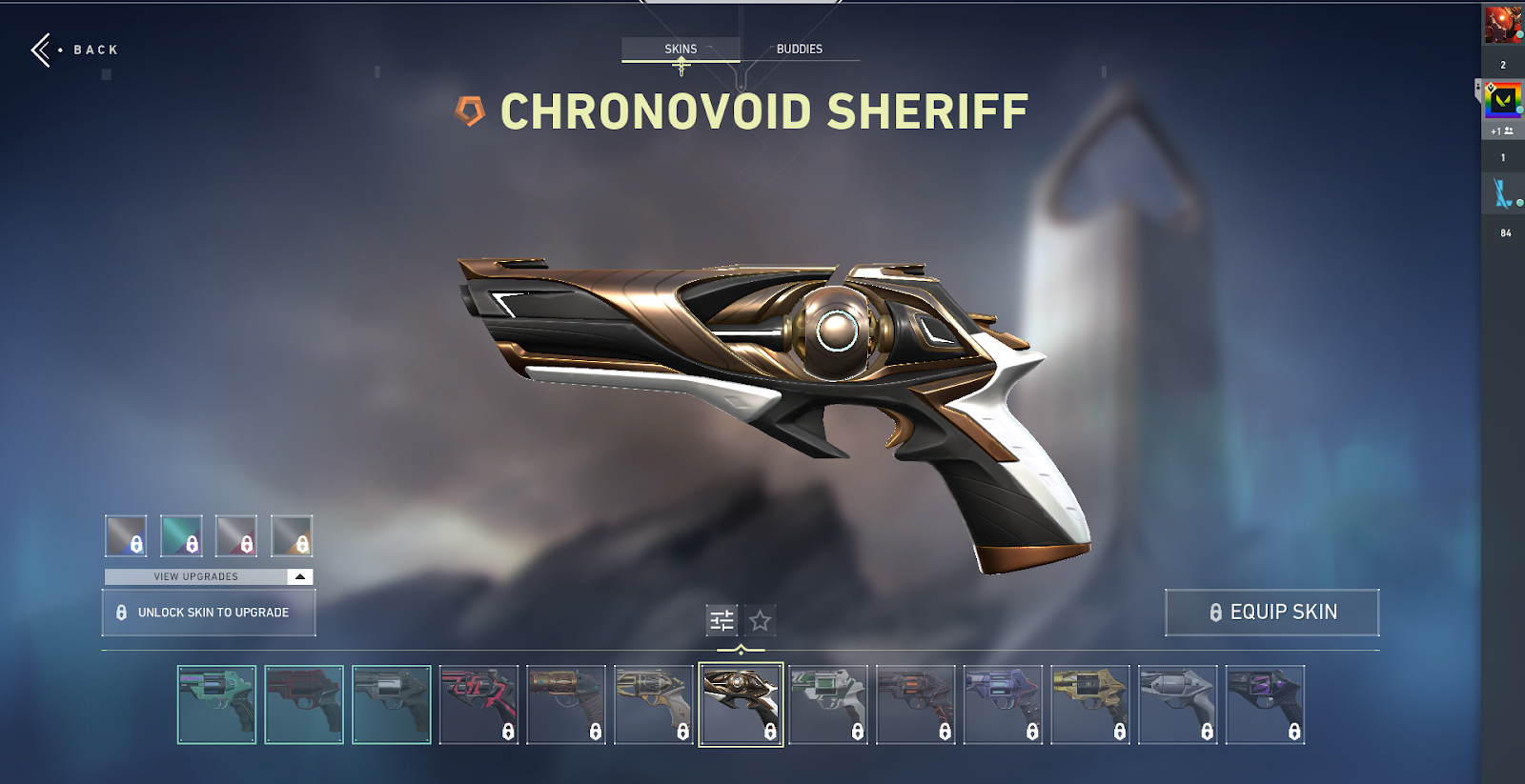 The Chronovoid Sheriff boasta a bold, black and white design with brass detail and one of Valorant's most popular weapon skins

The Chronovoid Sheriff as of writing this article is the latest Exclusive tier skin released. Despite being so new, it has won the hearts of many thanks to its amazing and greatly satisfying sound effects. It also has an amazing reload animation that can probably impress most people, and its default, straight-up design, is just beautiful. The animations of this skin are some of the best in the game. They aren’t too disturbing, while also bringing that spice and excitement to your Sheriff. The constant turning orb within the gun is its highlight.

Several praises can be made for this skin, but watching and finding out for yourself may be the best option.

Despite its amazing quality animations and VFX, it is priced cheaper than the Protocol 781-A Sheriff, and the same as the Singularity and Sentinels of Light Sheriff. The skin can be purchased once it appears in your daily rotating shop or your Night Market. 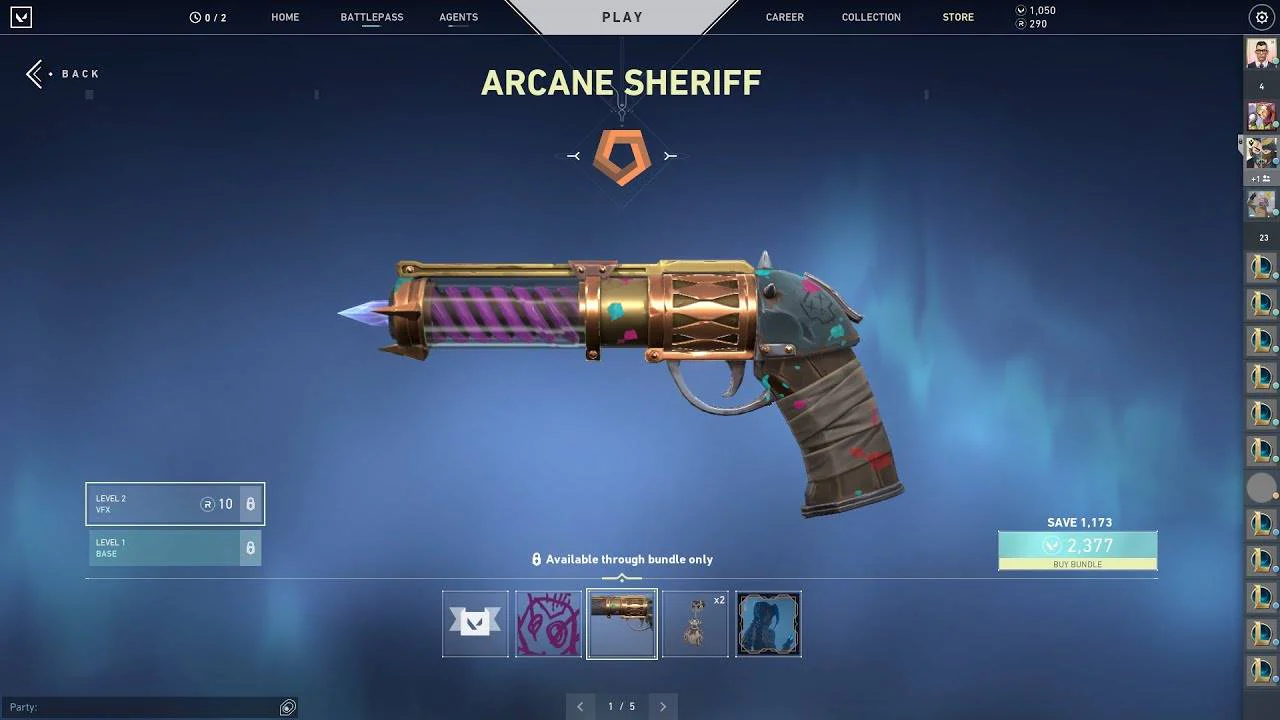 The Arcane Sheriff skin was based on Riot's animated series, Arcane

The Arcane Sheriff was part of an event promoting the release of Riot’s League of Legends anime titled Arcane. The skin was part of a limited-time-only bundle that can longer be bought. It was available for two weeks in November 2021.

The skin is the only sheriff skin that is held differently from any other Sheriff skin, making your experience with it a literal one-of-a-kind. Its reload animation is also very unique, which referenced the same weapon that appears in the promoted animated series — Arcane. 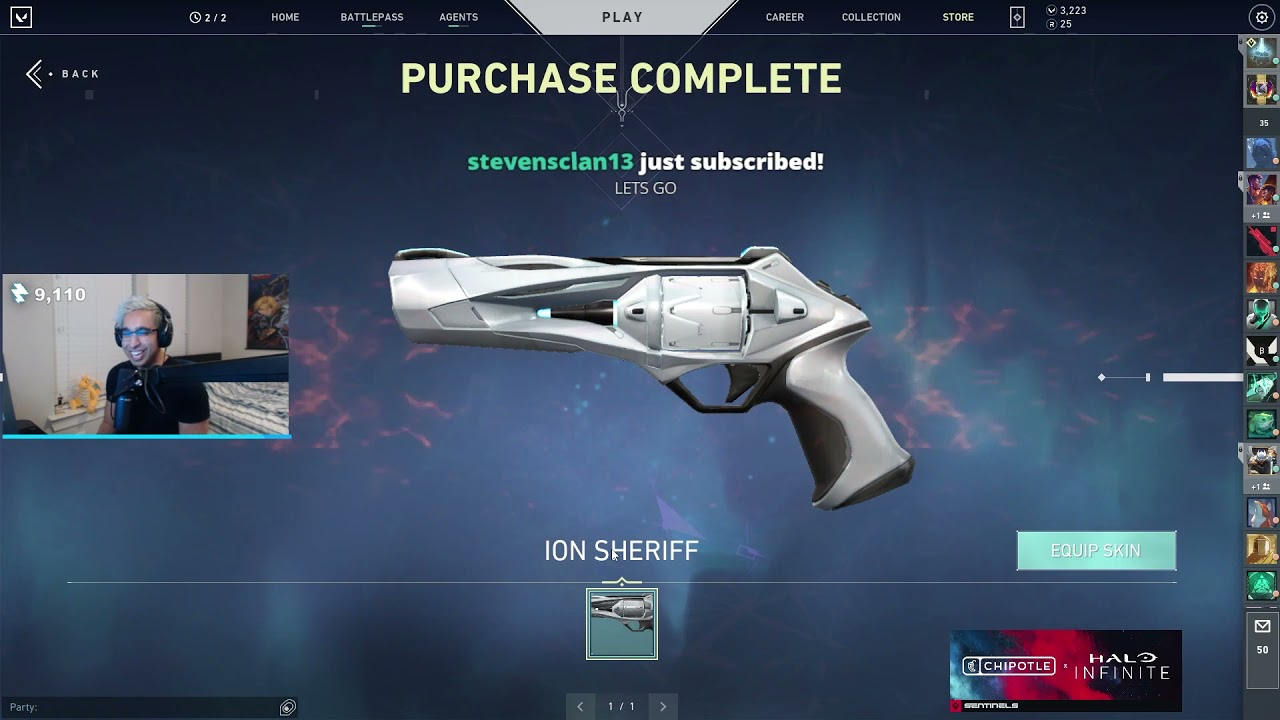 The Ion Sheriff was notable for being used and praised by pro player ShahZam.

The Ion Sheriff, widely considered to be the king of Sheriff gunfire sound effects, did not make it to the top five list. Its lack of other color variants and design hurt its value as a skin. In the end, the Sentinels of Light Sheriff was chosen over the Ion, as it had more to give and deliver.

These were our top five Sheriff skins to bring some change to your regular pistol. Or maybe this article convinced you to stick to the default skin. Either way, gun skins are only cosmetic, and all personal choice and preference. Make sure to choose the skin (or skins) that you'll like and enjoy. This article is only a reference or a guide to help you make your decision and show you the most popular and liked Sheriff skins. Happy fragging!