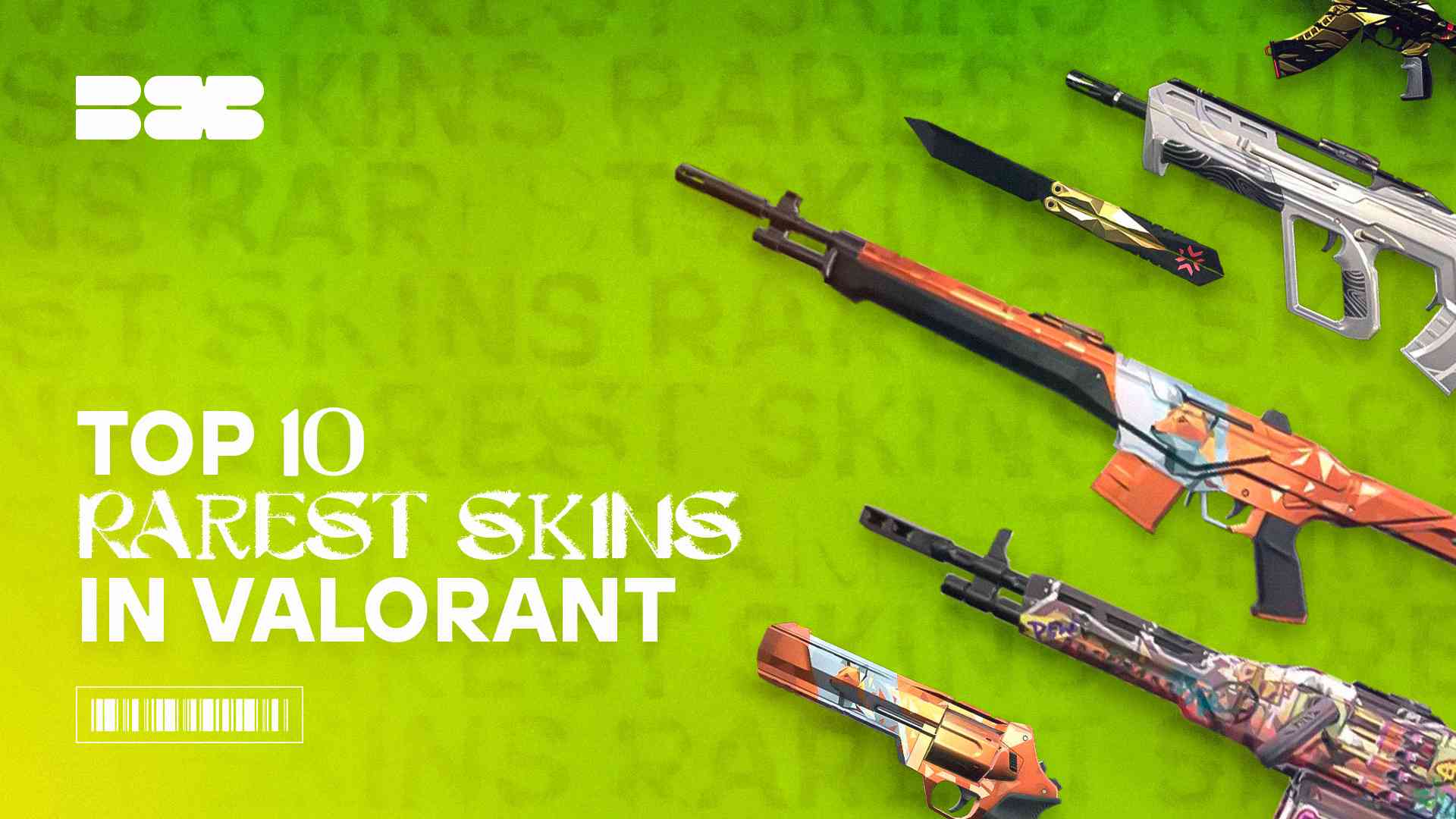 Skins are an integral part of Valorant. They help players personalize their experience by creating unique weapons.

In the article, we will present a list of the rarest skins in Valorant. Note that many of them are cheap, but they claim to be rare. It happens due to the limited period during which the skin is obtainable.

Most of them were released when the game first came out, and players had to gain a lot of experience to get skin, which was difficult back then. 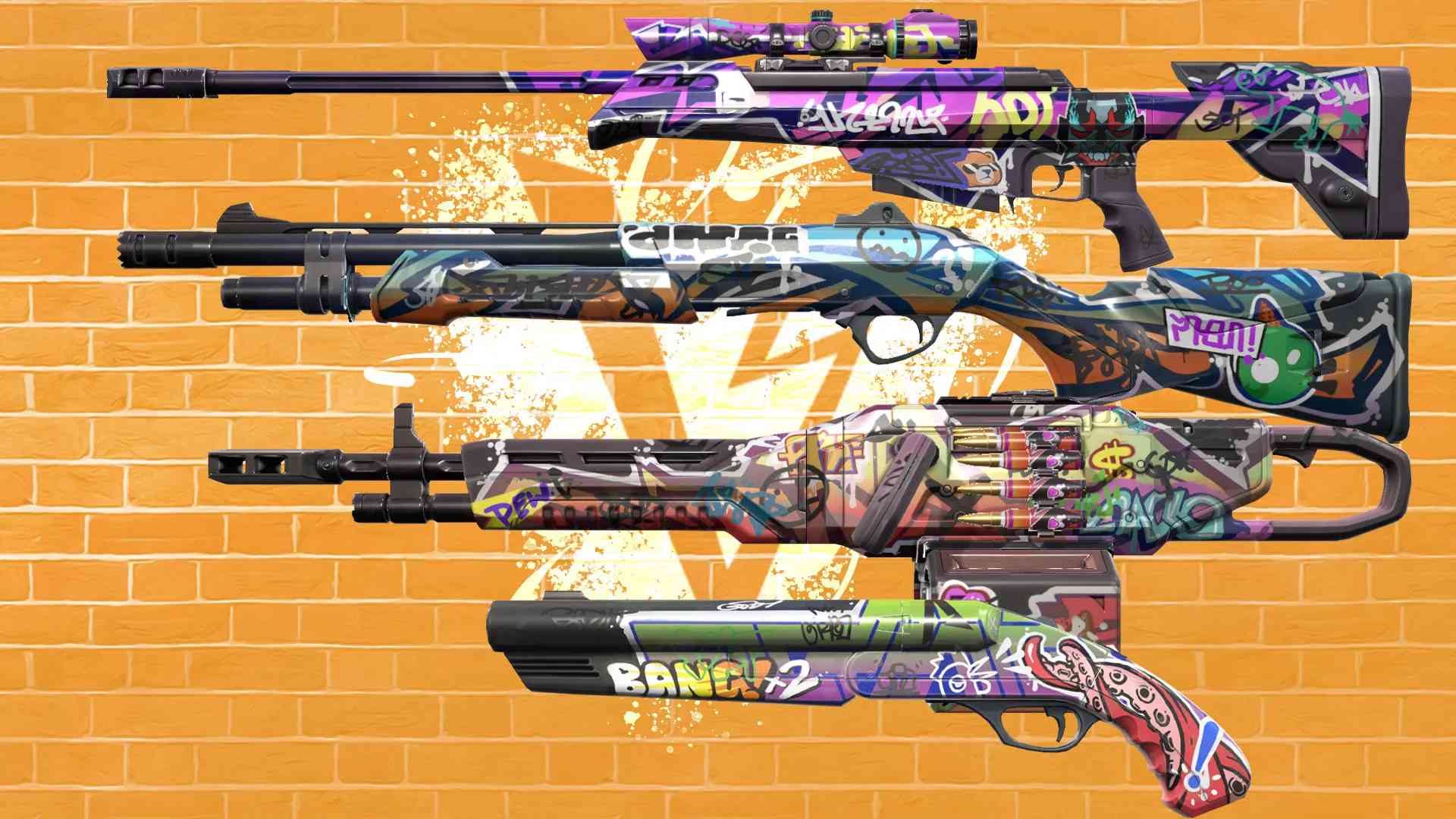 Compared to the usual Valorant skins, this collection is very bright and unusual in that each weapon has a different coloring that differs from the rest. The skins are covered in graffiti and have a unique color palette.

There is no way to buy this collection, as players can only get it by purchasing Battle Pass and earning XP. Available during the Formation Episode 2 Act 1 on January 12, 2021. Players can unlock weapons on different levels. Shorty is available from level 15, Bucky from level 5, Operator from level 25, and Odin from level 40. 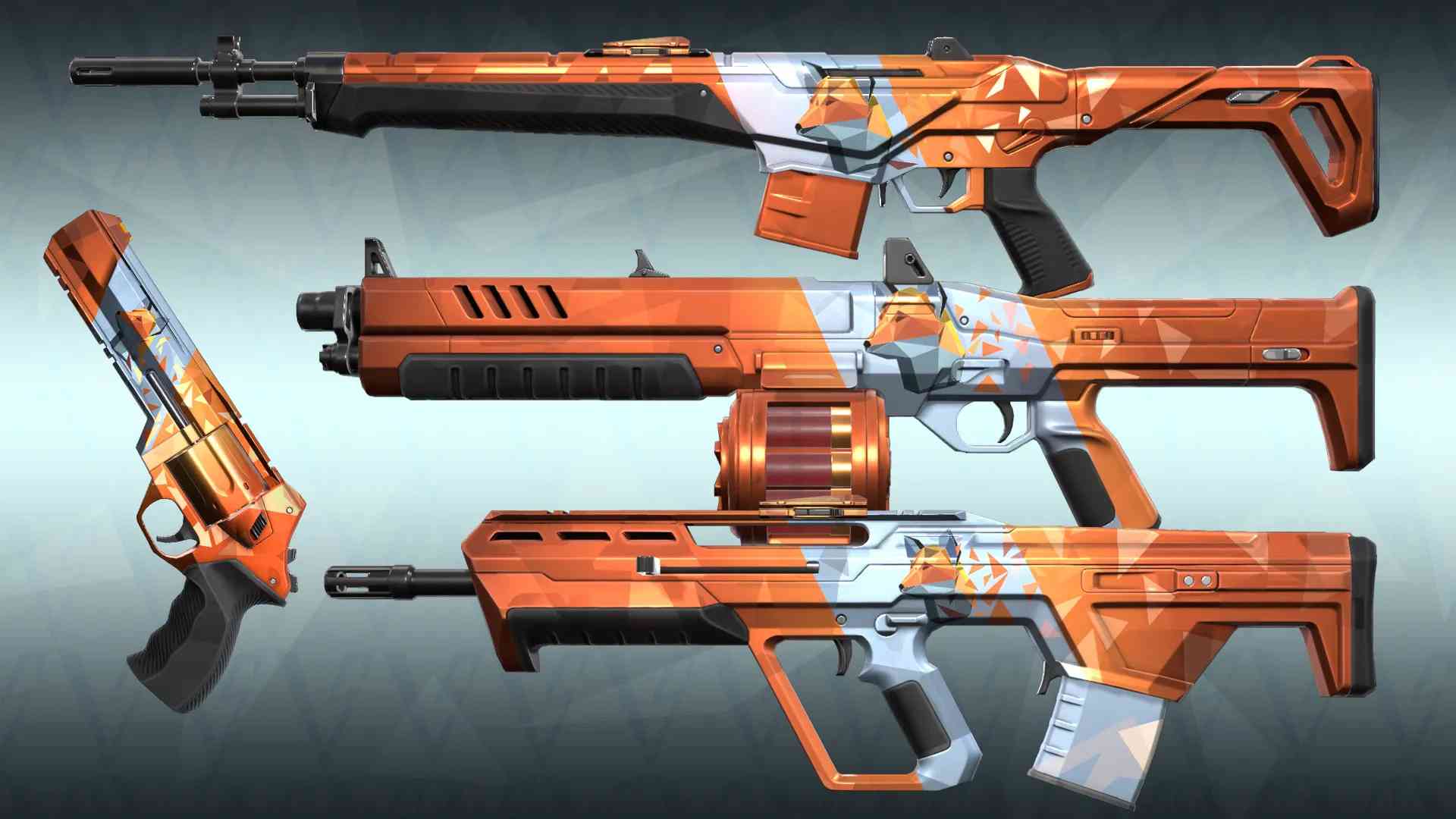 These skins depict foxy natures. Geometric stylization was used in depicting the foxes that adorn the weapons, so the drawings are uniquely symmetrical and reminiscent of origami.

The Polyfox Collection was released as a part of the Battle Pass for Ignition Episode 1 Act 2 on August 4, 2020. The collection contains skins for Judge, Bulldog, Sheriff, and Guardian. The Polyfox can only be obtained by purchasing Battle Pass and earning XP. Four skins can be unlocked at the following levels: Judge (level 10), Bulldog (level 15), Sheriff (level 16), and Guardian (level 20). 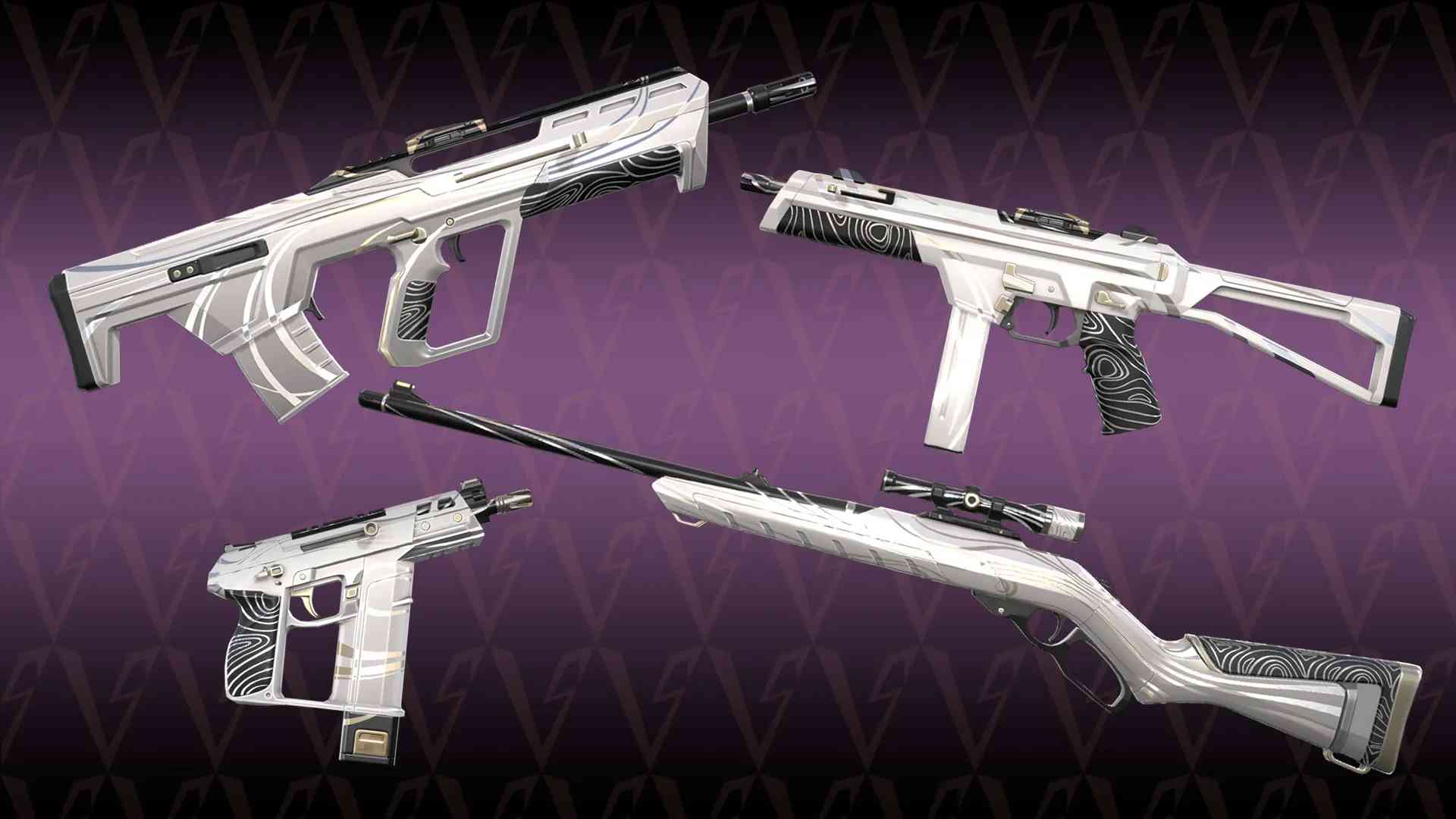 What could be inspired by the Couture Collection? Of course, the fashion houses of Milan and Paris. These skins in the game were ivory in color with slight markings on the sides. The black and white swirls on the grips and sights refer to the '60s fashion obsessed with animal prints. Nevertheless, it looks delightful.

These skins were available for Stinger, Marshal, Frenzy, and Bulldog. It was released during the Ignition Episode 1 Act 1 on June 2, 2020. 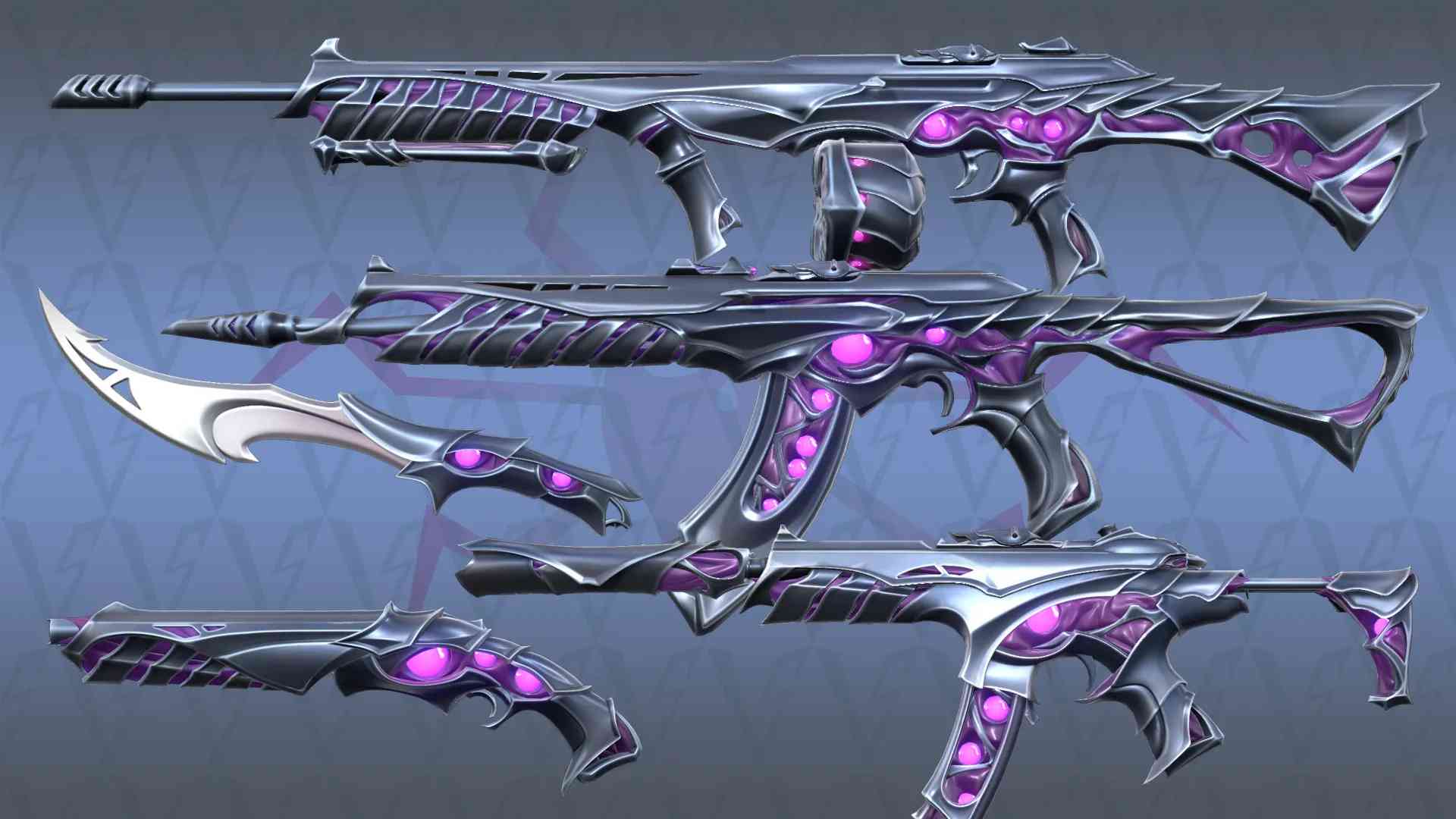 These skins have unique coloring. They resemble something alien, generally resembling the hive of some insect. Made of exotic metal and filled with purple alien slime.

Part of the Battle Pass during Ignition Episode 1 Act 2, which was available from August 4, 2020. Hivemind featured weapons such as Ares, Spectre, Vandal, and Shorty, along with a Knife skin.

The main reward for this Battle Pass is a Knife, which unlocks at level 50. 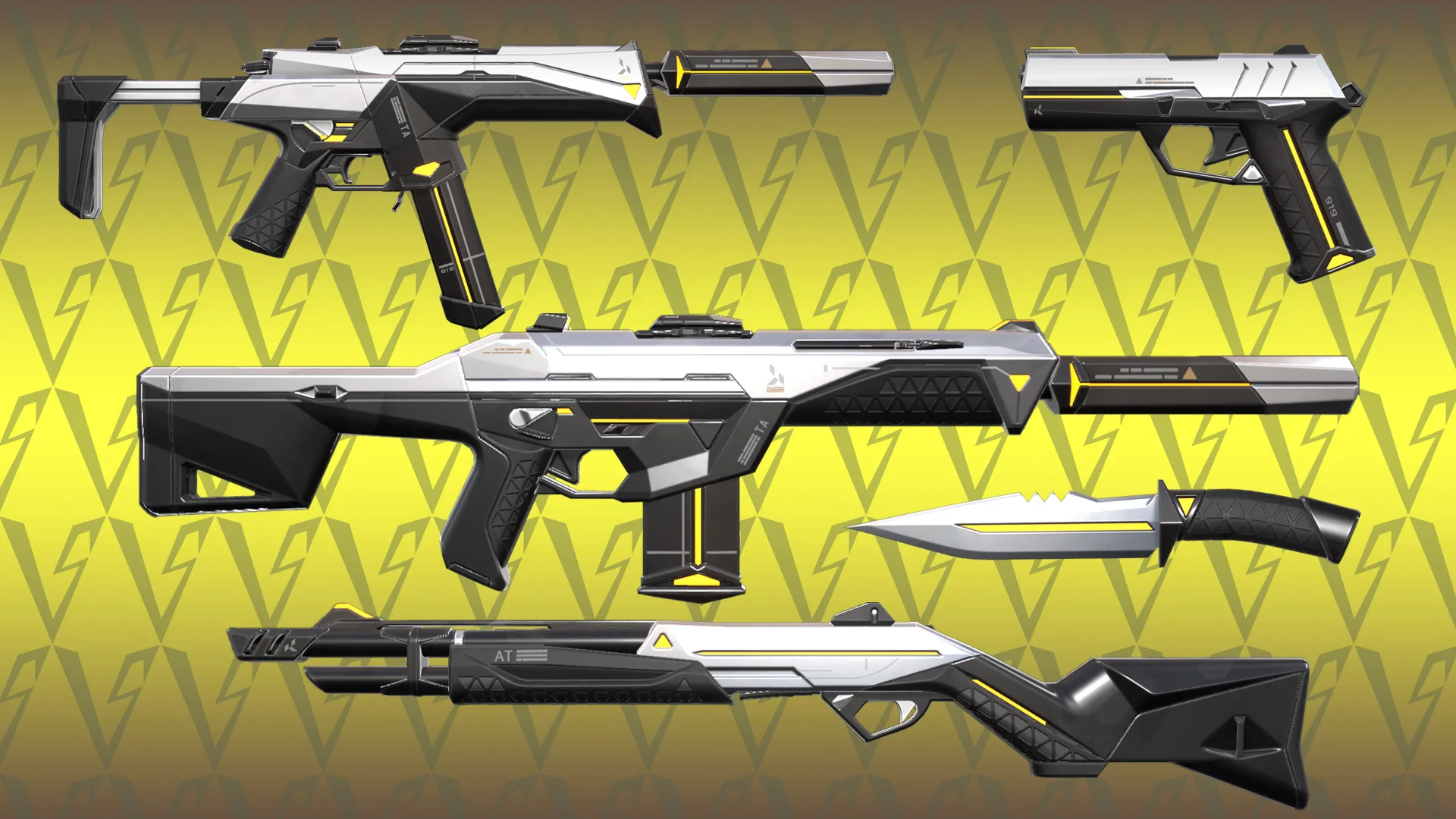 This is a futuristic weapon set, which at first glance is very simple in design. The skins come in metallic silver. The grips are black with yellow lines on the sides.

The Kingdom collection contained a knife that appeared in the game for the first time. In addition, there were skins for Bucky, Spectre, Phantom, and Classic. It was first introduced on June 2, 2020, during Episode 1 Act 1 of Ignition.

Collecting these skins caused a great stir at the time, it is now inactive. 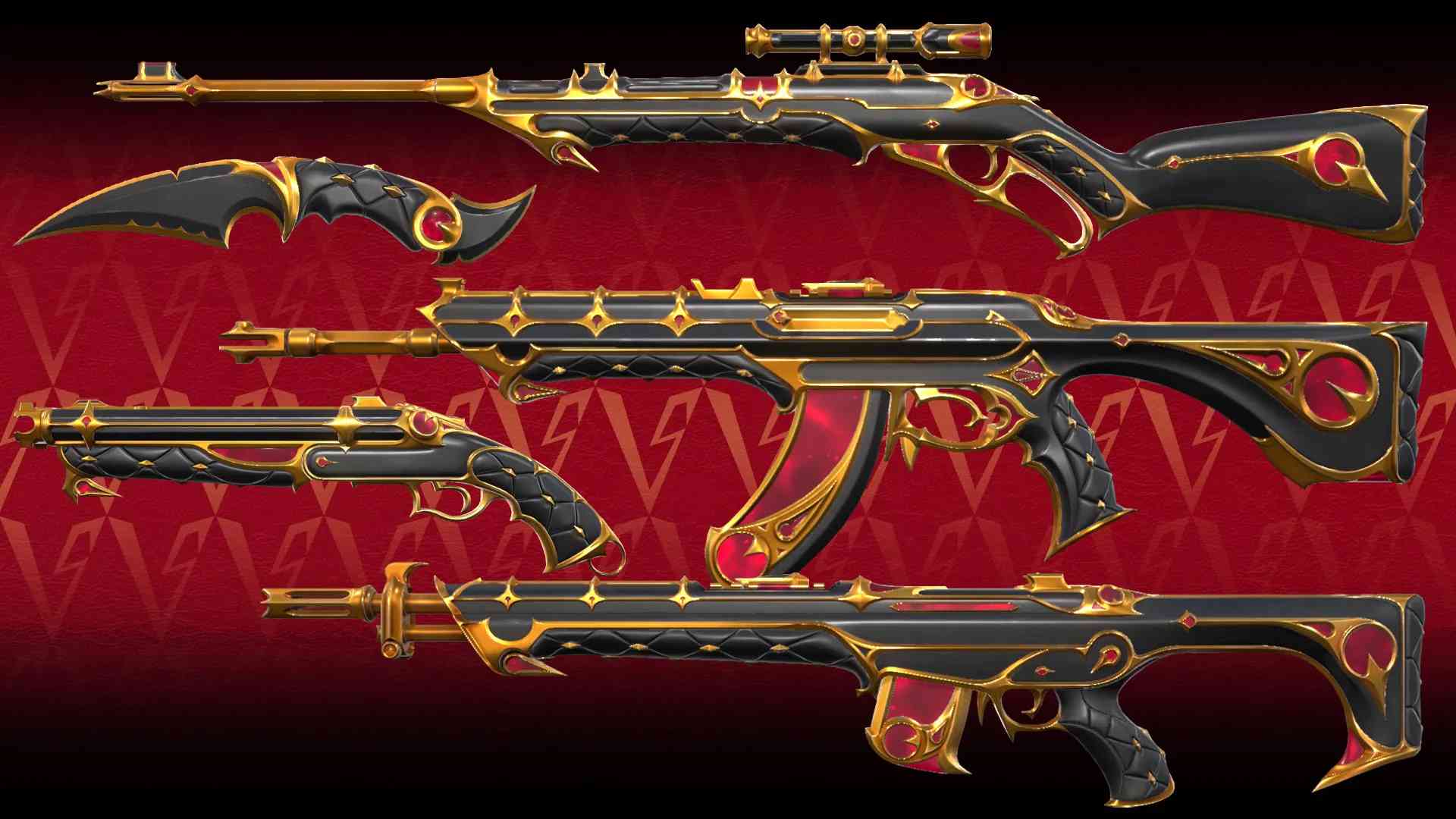 The royally beautiful skins in this collection are painted black and framed in gold metal. There are also red crystals on these skins, which give an even more luxurious look to these weapons.

The Ruin Collection was first released during the Ignition Episode 1 Act 3 on October 13, 2020.

This set includes skins for weapons such as Marshal, Shorty, Guardian, and Vandal.

An important detail - this collection also includes one of the most significant knives in the game - Ruin Dagger.

This wonderful collection was released to commemorate the first World Championship of the game. The total bundle cost 6263 Valorant Points. Half of the profits from the sale of these skins went to charity, and the other half was divided among the Valorant 2021 teams.

These skins are completely unlike the ones released before them. That's why they are a limited edition. Riot released Vandal and Champions-themed knife to celebrate the first tournament. These skins have gold and black stickers with the Champions logo. And the Champions Aura design makes the Vandal's Champions text on its side glow with each kill.

This collection will no longer return to the in-game store or the Night Market. The only opportunity to get it was from November 24, 2021, to December 12, 2021. 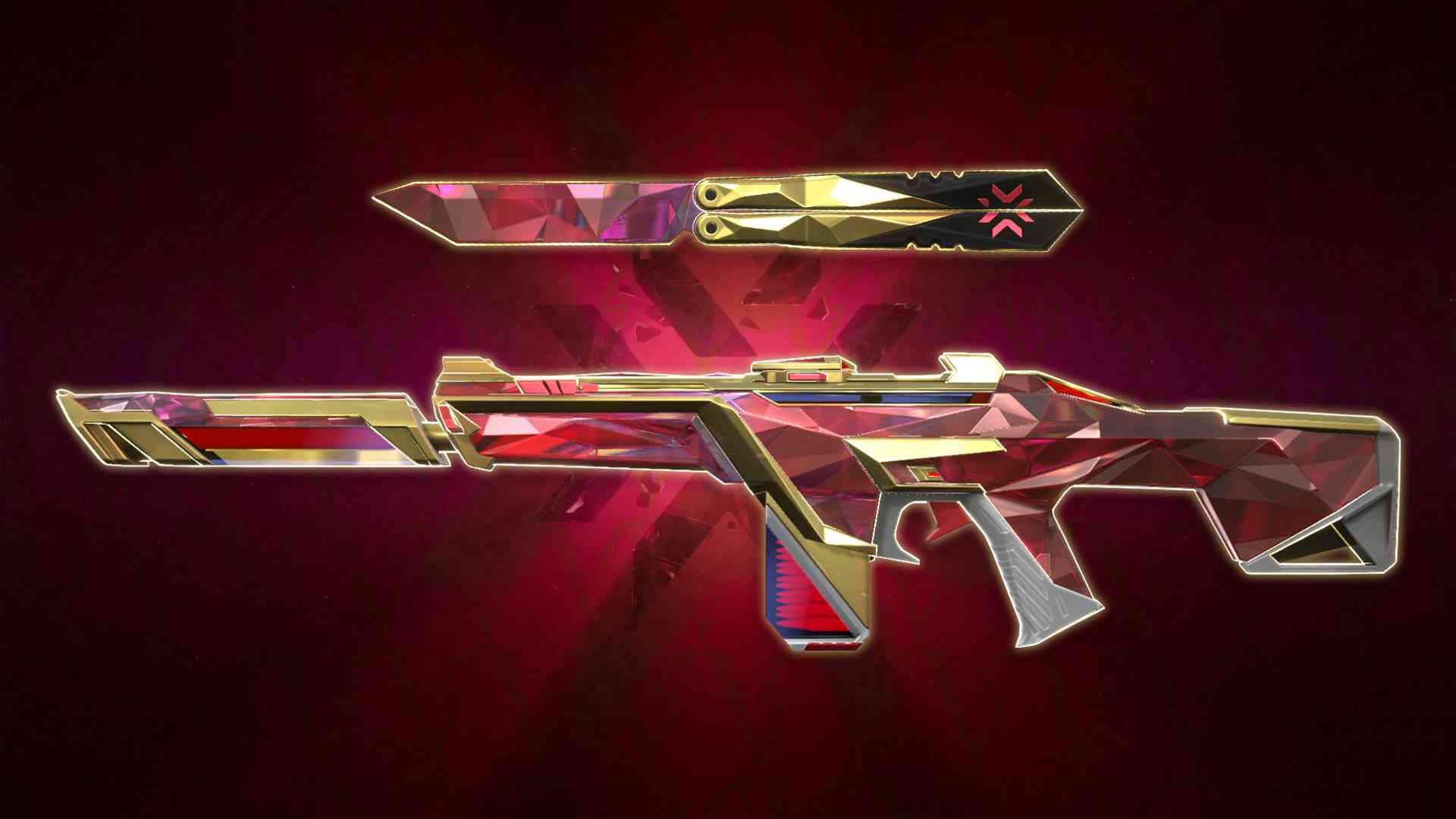 Following the Сhampion Сollection of 2021, there is another new one. The 2022 Сollection surprised with its luxury. It is done in gold and red tones, giving it the majesty of champions. It includes Phantom, which costs 2675 VP, and Butterfly Knife, which players can get for 5350 VP.

This bundle was released for the celebration of the 2022 VCT Champions.

Although these skins are the newest available, they are already listed as Rare.

While it was in the store (from August 31 to September 18 this year), it cost 6167 Valorant Points. After September 18, these skins will never return to the store or appear in the Night Market.

As with the previous Champions Collection, 50% of the profits from its sale will go to the teams participating in the tournament, and 50% will go to charity. 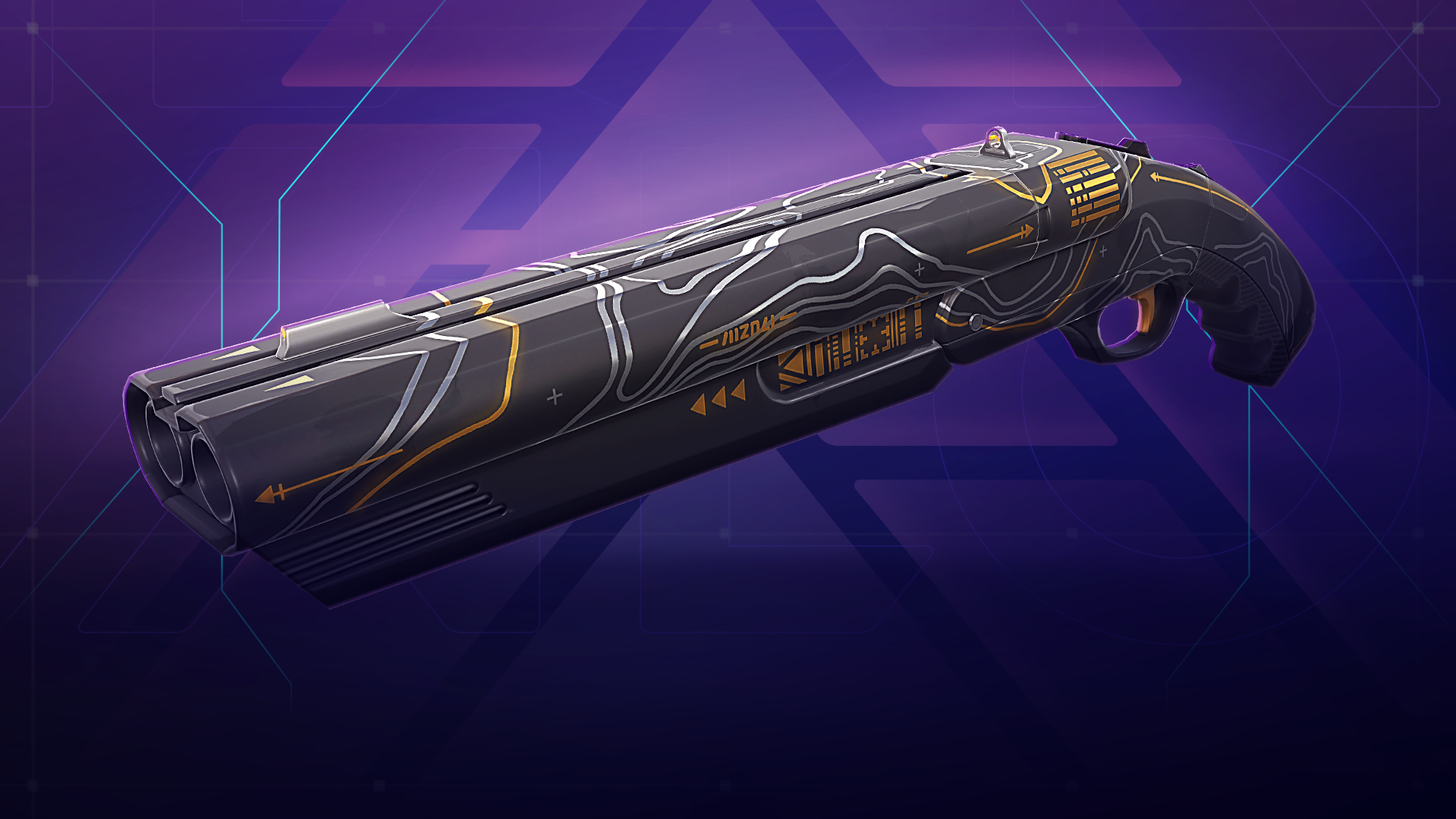 The main color of the skin is matte black. However, it is complemented by gold and silver patterns. It is unique in that the game has no other weapon that replicates the design of this one. It is the first of its kind.

Wavefinder Shorty was released in January 2022 as an exclusive award for Twitch Prime subscribers.

Currently, it can no longer be obtained. Therefore, players will be lucky if they encounter such skin nowadays. 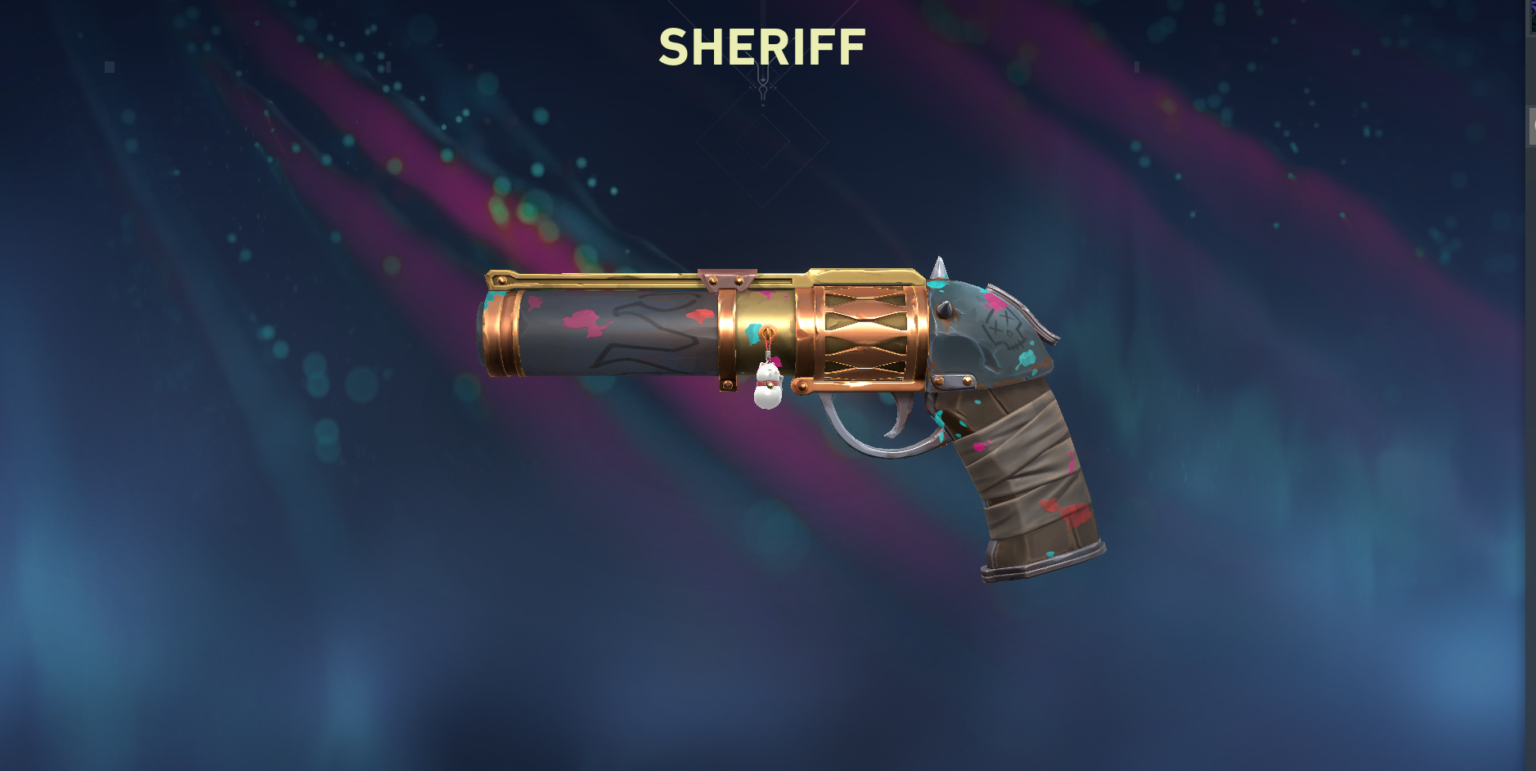 This is by far the rarest skin found in Valorant.

The Sheriff's skin is one of a kind and is a replica of the gun of one of the main characters in the series, Jinx. The holding and firing animations have been tuned to feel just like Jinx. Overall, it’s a unique experience for the Sheriff.