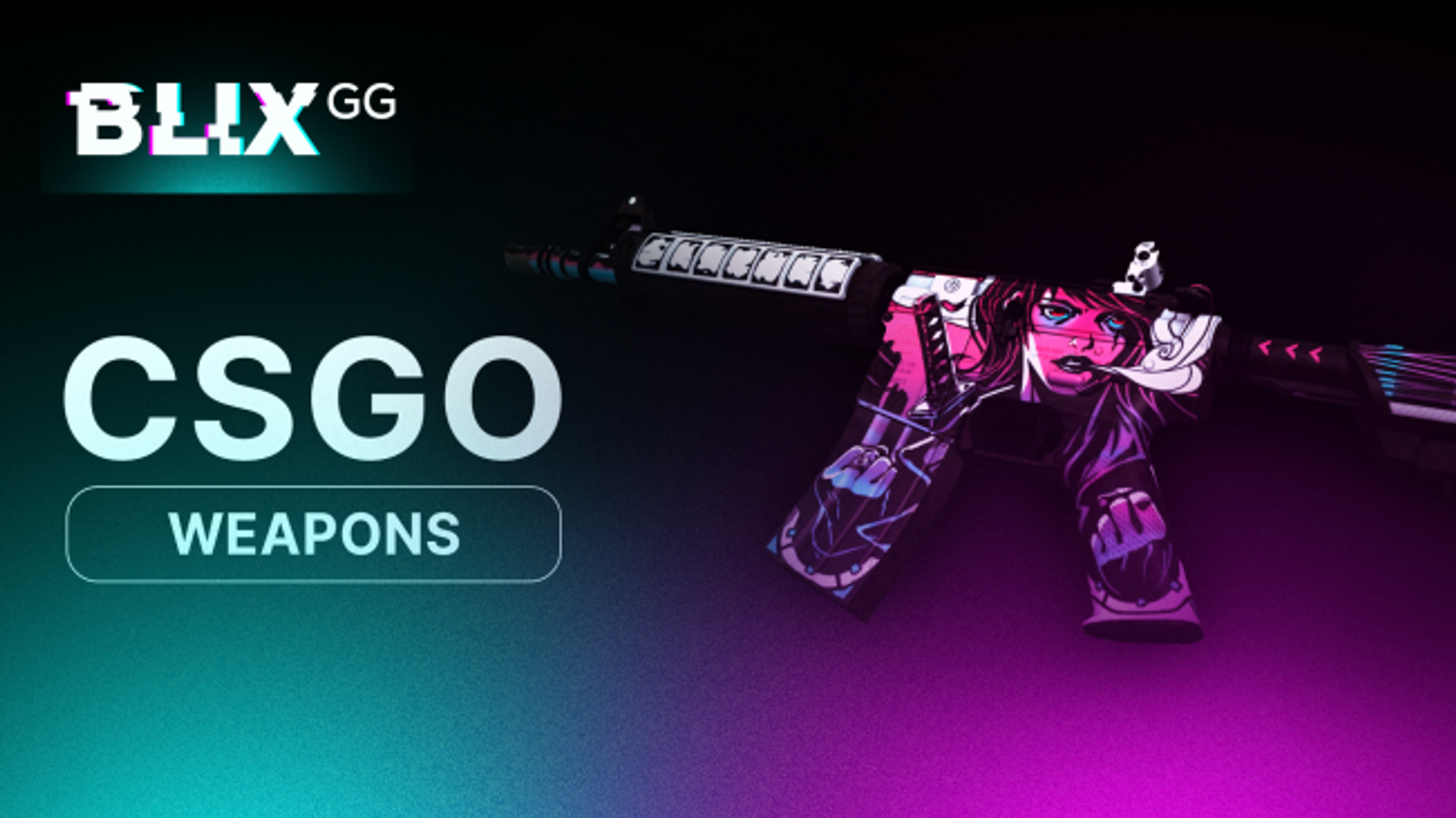 There are 35 different weapons, including a knife, in CS:GO now. Some are entirely useless; some are indispensable for a successful game. These weapons can be divided into five types: Melee, Pistols, Heavy, SMGs (Submachine guns), and Rifles.

The CS:GO knife is the only weapon that cannot be dropped or purchased. It has a short range and is usually used to finish the opponent. It is quite dangerous, especially from the back, and can damage up to 180 health points from the back. There is no real-life version of CT and T knives, so their designs seem to be created specifically for the game.

Glock-18 is an Austrian pistol often used in Counter-Terrorist operations. Ironically, this is a spawn weapon for the Terrorists in the CS:GO. Glock-18 is one of two weapons in the game with the burst mode; also, it can be switched to the semi-automatic mode as it is usually used. USP-S is one of the two optional spawn weapons for the CT side. This German pistol has a silencer attached by default, but players leave it as the silencer increases accuracy and decreases recoil. Another option for the CT at the beginning of the round is one more German-made gun, P2000. It is less chosen than USP-S due to being less accurate than the opponent.

Dual Berettas are a couple of Italian Beretta 92 pistols. The popularity of this weapon has recently increased because of the lowering of the price. P350 is the US semi-automatic pistol, which snipers often use as an alternative to AWP on short distances.

Belgian Five-SeveN is the CT option for $500; very accurate but not too popular due to its low damage and high price. The T response for the same price is the Swedish TEC-9. This one is used more frequently as it has high accuracy and damage. CZ75, the only fully automatic pistol, is the switch option for two previous guns. Unlike all other pistols having a kill reward of $300, CZ75 has only $100 from the Chech Republic.

The R8 Revolver is the most powerful and useless gun in the game. It has a long reload time and low capacity, the heaviest pistol. Furthermore, you can only use this US gun instead of Desert Eagle, nonsense. Desert Eagle or Night Hawk .50C is the King of the pistols, the most expensive one ($700) but still the most loved. Even after being nerfed, this masterpiece of the Israelis' gunsmith remains a bestseller, especially for the “force” rounds.

MAG-7 is a South African weapon developed for close-quarters combat. This shotgun can be used during the anti-eco rounds for the CT side as it has very high damage and a generous $900 kill reward. Nova is an Italian hunting and self-defense shotgun; it has lower damage and price than MAG-7 but can be tactically used in the same way.

The Terrorists’ counterpart for the South African gun is US Sawed-Off; it costs $200 less and has higher damage. Another useless CS:GO weapon is the only auto shotgun XM1014. The most expensive one delivers the lowest damage; XM1014 was made in Italy.

Machine guns and shotguns are not used in the game, except in fun or misclick situations. Belgian M249 is one of the two examples of these CS:GO weapons. It has a high damage and headshot accuracy, but it is very difficult to control its spray. Another machine gun is the Negev, which was made in Israel. This gun has similar stats and a lower price than M249, but that doesn't make it more popular or useful in the game.

American MAC - 10 is a cheap ($1050) and not too powerful machine gun available for Terrorists only. It is usually used for anti-eco rounds due to a high kill reward ($600) – a great tool against non-armored enemies.

German MP5, UMP-45, and MP7 are not popular due to high prices and low damage. In turn, MP9 is commonly used as the CT alternative to MAC - 10; it is cheap, and a player can earn $600 with it; it came from Switzerland.

P90 was created in Belgium for tankmen, this is a modern, powerful, and completely useless CS:GO weapon. The last SMG is PP-Bizon, or “Pea Shooter,” because of terrible damage.

AK-47 is the best and most popular CS:GO weapon, thanks to its high power, long range, and low cost. 34.35 % of all kills on HLTV were done with this rifle. AK-47 is only available to the T side in the game. The AK-47, unlike its CT counterparts, may kill a helmeted player with a single shot to the head. It has pitfalls like inaccuracy after many shots and high recoil, but these are just nothing against the pluses.

American M4A4 and M4A1-S are exclusive assault rifles to the CT side. Because of their superb accuracy and minimal recoil, they are ideal for firing bursts. Spraying isn't usually a good idea until the enemy is close by. M4A4 was more popular than M4A1-S, but after one of the recent CS:GO, M4A1-S has higher damage, and even 25 magazine capacity does not make players give it up to M4A4. Anyway, all CT-side players are trying to loot AK-47.

Galil AR is an Israeli-made assault rifle; it costs $1800, making it the cheapest rifle for the CT side. Galil AR is a good choice for a low buy round assault rifle but is not very good for full buy rounds as you can always get AK-47. The alternative to it is the French FAMAS, which is a cheap and relatively powerful weapon available only to the Counter-Terrorists. Also, it is the most affordable CT side assault rifle at $2050.

The Swiss SG 553 has somewhat lower basic damage than the AK-47, but it is the only weapon with 100% armor penetration, compared to 77.5 percent for the AK-47. Out of all assault rifles, the SG 553 has the slowest moving speed. It is somewhat more costly than the AK-47, making it the terrorists' most expensive assault rifle. Another CS:GO weapon equipped with a telescopic sight is the Austrian AUG. It is accurate and has a reasonably powerful recoil. It possesses the best first shot accuracy of any assault rifle when scoped in. The AUG is relatively hefty and has a long reload time.

Austrian SSG 08 or Scout is a cheap sniper rifle option available to both sides at $1700. The SSG 08 fires at a reasonably low rate, albeit somewhat quicker than the AWP. It, like the AWP, has a long reload time. It has a lot of bullet penetration.

G3SG1 is the German automatic sniper rifle. It is available only to the Terrorists. G3SG1 costs $5000, making it one of the most expensive weapons in the game after the M249. The Belgium alternative for the CT side with almost the same stats is SCAR-20. These guns are not very popular because of the high price and inability to one-shot the enemy.

The UK AWP is a powerful sniper rifle available to both sides, with a 10-round magazine capacity. It's a devastatingly potent long-range weapon with monstrous stopping power and incredible precision. However, mastering its use takes a significant amount of training, practice, precision, and expertise due to its exorbitant price tag and difficult playstyle.