7 tips to defeat ENCE on Nuke

My main job as an analyst is to break down the opponent in preparation for my team’s upcoming matches. Today, I broke down the recent performance of ENCE on Nuke (their last four matches) and found a few holes in their setups that can be easily exploited.

Here’s what could help you overcome ENCE if you ever meet them on Nuke in matchmaking, FACEIT, or during a Major.

They never start a round with a ramp Molotov

Some teams get used to starting a round with an incendiary to block the ramp approach. Sometimes it means a certain thing, sometimes not, but here we can see a very specific moment: ENCE doesn't throw a Molotov at the start of a round.

Instead, they throw a smoke, and very often, it's this exact one. 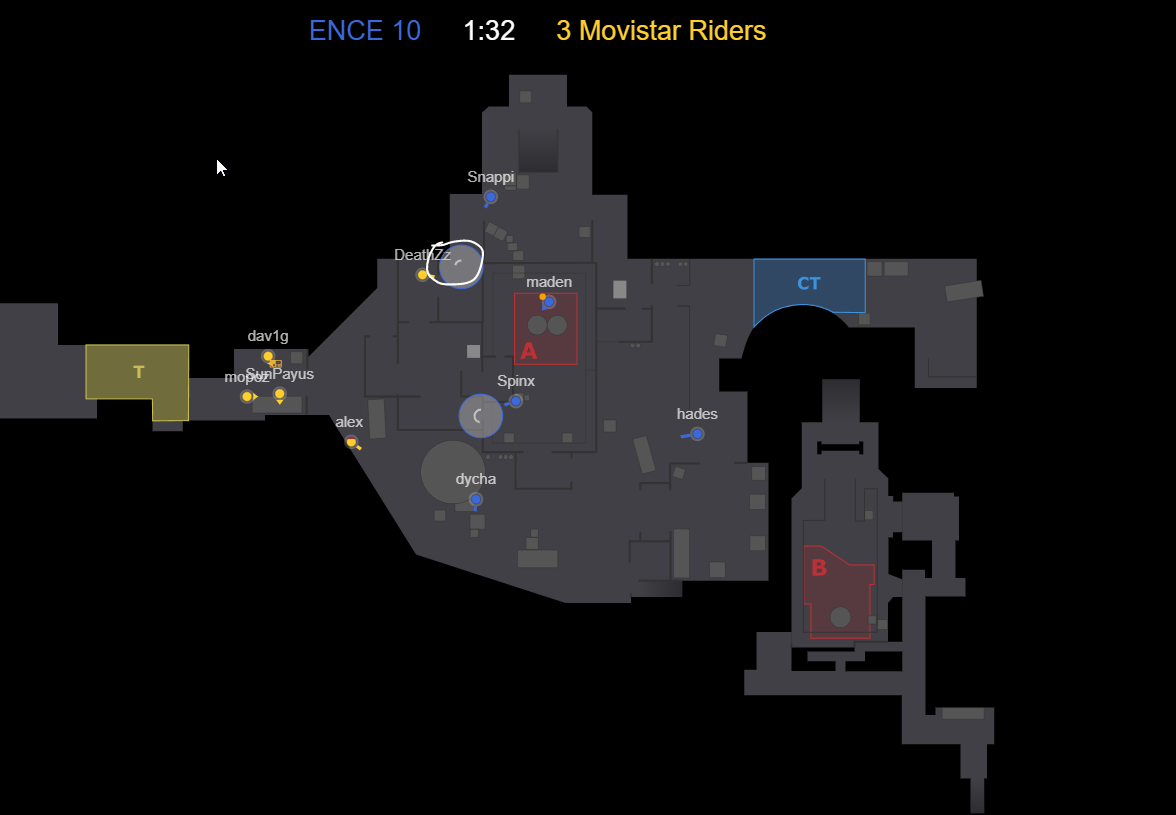 Understanding the movement pattern of Snappi, ENCE's ramp player, might help out to punish him on early timings. Marco likes to play right behind the smoke between 1:40 and 1:35, it could be abused a couple of times during the map.

ENCE like to play aggressively towards the outside and contest this area of the map. Sometimes, it could be just an off-angle peek in garage. Other times, it's a player going directly to secret or playing around T-red.

One more thing that ENCE add to their pro-active outside plays is HEs towards T-boxes.

In around 20% of rounds, ENCE players throw 2x HEs around 1:45, which may cause a good chunk of damage. Sometimes, they even get rewarded with a kill.

In the screenshot above, you can see, that REZ is aware of this pattern, but if the opponent plays very aggressive outside in the early round - it might hurt a lot.

No Molotov hut could make some fun

Despite how much attention ENCE pay to outside, they mostly play throwing an early Molotov hut, which could make them vulnerable to early top site rushes. With how ENCE usually plays, they are often more or less ready for that scenario, but if opponents just directly rush hut, it might cause a fair few problems.

Pistol rounds are often 50/50, and that is true for Ence too. But still, knowing the pattern of the opponent might help you out even in pistol rounds.

In the last four games, ENCE didn't wait for... anything, actually. They tend to come out quickly and it seems like they don't enjoy playing slow pistol rounds.

Understanding this might help you to choose a better compact setup with a focus on one of the sites.

What ENCE like a lot during their slow T-rounds, is to take different off angles in hut or in their approach from lobby.

That's a specific moment to be aware of, especially if you have the intention to push hut.

This knowledge will hopefully help you to build the best game plan if you ever run into these stars in a match.