EU MASTERS 2022 SPRING ROUNDTABLE: SURPRISES, NON-ACCREDITED ERL TEAMS THAT COULD CAUSE AN UPSET AND MORE 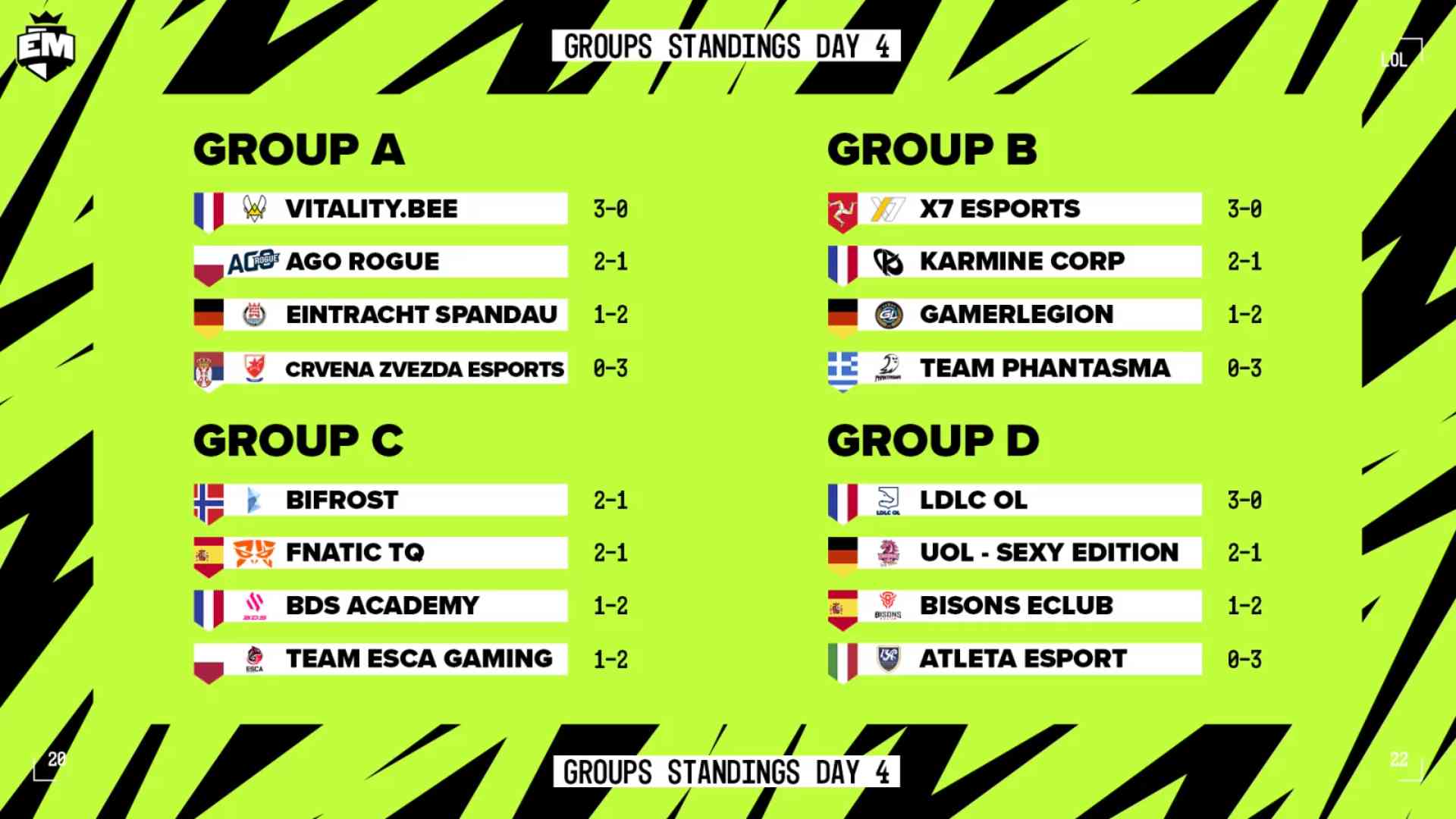 The European Masters 2022 spring has been taking a much-needed short break before the action resumes once more to determine the best eight teams from the Group Stage. There have been a number of surprises so far, from the NLC teams stepping it up to some stumbles from big names like Fnatic TQ and Team BDS Academy.

It’s all to play for in the second round of Groups and nothing is set in stone yet. BLIX.GG’s writers sat down to share some of their thoughts on the Group Stage overall.

WHAT DO YOU THINK ARE THE BIGGEST SURPRISES SO FAR IN THE EUM MAIN STAGE FOR ROUND 1?

LEC Gliscor: I think after watching the Play-In stage, and following X7’s capabilities and performance during the Spring Split, some intellectuals could have already predicted this, but the truth is most fans do not know much outside of their own leagues. Bifrost defeating Barcelona and BDS Academy, and X7 gigastomping their groups put NLC as the region with the highest winrate in EU Masters, even more than LFL itself! Kang “Haru” Min-seung is playing like a monster, and at this point, X7 winning the championship would not be much of a surprise. NLC 3rd seed right now please.

As a second guess, Team ESCA Gaming have shown a much better performance than everyone expected besides being in the “Group of Death”. Their victory against Fnatic TQ was a serious clutch, and although they haven’t achieved any more victories yet, their bot lane, composed of Franciszek “Harpoon” Gryszkiewicz and Igor “marlon” Tomczyk, is the biggest surprise duo at this tournament so far.

Megalodontus: I’m sure my colleague will say NLC but as a seasoned “NLC enjoyer” myself, I wasn’t surprised at all! Not one bit! Ok, I lied a little. Bifrost has definitely surprised me with their run from Play-Ins to defeating BDS Academy, a team many considered to be in the top 4 in the EU Masters Power Rankings. Bifrost were a team that didn’t have a strong early-game despite having strong mid to late game plays. I worried that wouldn’t have been enough but so far they’ve proved me wrong and I couldn’t be happier for them.

Another surprise for me is AGO ROGUE because they brought in Mauno “beansu” Tälli, a top laner, to replace their starting support Leon “Leon” Maximilian Anton. Despite that change, they ended Round 1 with a 2-1 scoreline and went toe-to-toe with group leaders Vitality.Bee as well. Interested to see what the Ultraliga’s first seed is capable of in Round 2.

CONVERSELY, WHAT DO YOU THINK ARE THE BIGGEST WORRIES AT THE MOMENT?

LEC Gliscor: With GamerLegion winning Prime League Finals pretty comfortably, they gave me a the vibe of being capable to dominate a good amount of top ERL teams, but X7 overperforming and Karmine Corp’s victory over them meant that now they most likely will have to sweat blood if they want to qualify as second seed in this group, with the match against KCorp being a decider.

Megalodontus: It would be easy to say Karmine Corp, because they are the back-to-back EUM champions and they even have Martin “Rekkles” Larsson on their roster, but they seem to be having a lot of up-and-down performances. I’d say they got a lot of practice from Play-Ins if nothing else, and I won’t be getting full-blown worried about them just yet.

The Prime League for me, in general, has been the biggest worry. I honestly expected better showings from GamerLegion and to a lesser extent, Eintracht Spandau, but they have not been overly impressive so far. Unicorns of Love Sexy Edition have been their best team so far since they got more game time in the Play-Ins, but they’re the third seed from the DACH region. Most people consider the Prime League as the third strongest ERL and for me, they will really need to show up in Round 2 to prove that statement.

WHICH NON-ACCREDITED TEAM IS MOST LIKELY TO CAUSE AN UPSET IN ROUND 2?

LEC Gliscor: I’m not gonna lie, minor ERLs have shown pretty bad performances so far. But, they are more than capable of improving their results in Round 2 and deciding the fate of some groups, even qualifying themselves. Of the three minor ERLs teams, I think EBL will have most of the chances to upset this EU Masters.

Crvena zvezda Esports, apart from making me google their name each time I write about them, field what could be the most veteran and seasoned roster of the three. I think Team Phantasma and Atleta Esports lack some experience in dealing with other ERLs, while all CZV players have been in EU Masters before.

(Edit: As Aleksa “DoubleAiM” Stanković has recently been benched, he will be subbed by their coach Atila “Colamax” Dudaš, who also has played in EU Masters before, so the argument kind of holds, but with less team chemistry.)

Megalodontus: I’m gonna say Atleta. Am I playing to my Italian bias? Yes, I am. Well, I have good reason for that, I promise (please don’t fire me, boss)!

Of all the three teams from the non-accredited ERLs, in my personal opinion, the PG Nationals champions Atleta have shown me glimpses of potential to trigger a big upset, though, to be fair, the Italian teams have often caused many of these in previous EU Masters!

In all three of their games, Atleta have either been almost even or ahead in gold against the big hitters in their group. They have a pretty strong early game and have also shown they’re not afraid to bring out specialist picks like Lauri “Endz” Tarkus’ Draven against LDLC OL. I believe that if they can build on that and work on closing out games, we could see a big upset in Round 2 on the cards.

WHAT GROUP HAS BEEN THE MOST ENJOYABLE TO WATCH SO FAR?

LEC Gliscor: I think a good group in EU Masters necessarily needs a France vs. Spain showdown. BISONS ECLUB’s 1-2 result was kind of a boring result, so it has to be Group C. Apart from that, both Fnatic TQ and BDS Academy could easily be considered as favourites to win this tournament, and NLC and ESCA were also able to get some wins for themselves, making them the most tied group so far. Everyone in this group could be out, and everyone could go either first or second. This Saturday could easily be the best day so far of this EUM, as in Round 2 each day a group plays all the remaining matches.

Megalodontus: Oh Group B for sure. No NLC bias. Well, maybe just a smidgen. I do think Group B has been the most entertaining overall due to the many narratives, perceived strength and some of the games there.

There was X7, whom many people doubted, and are now 3-0 while also drafting some insane compositions like Tryndamere, Vladimir and Soraka against GamerLegion. Karmine Corp of course, defending champions but somewhat struggling. They have huge support but also a lot of skeptics, and yet they finished Round 1 in second place.

GamerLegion, Prime League champions, a lot of expectations rest on their shoulders but they sit at a precarious 1-2. With how the NLC and Prime League have been stoking up the rivalry on Twitter, they will be determined to bounce back. Lastly, Team Phantasma has no expectations on them, and maybe this is where they can shine. I am stoked to see how this group plays out in Round 2!

ANY HOT OR SPICY TAKES BEFORE ROUND 2 BEGINS?

LEC Gliscor: Vitality.Bee will overperform a lot. I think Vitality.Bee ended up becoming a dark horse for everyone, even myself, being the 4th seed of LFL when everyone was paying attention to KCorp, BDS Academy and LDLC OL. Their Play-Ins were quite dominating, and so far they stomped this Round 1. While they usually do poorly at EU Masters, I think this time Vitality.Bee will dodge their curse, and perform the best between all LFL teams of this EU Masters.

Megalodontus: How does X7 winning EUM sound? I suppose that would be a super hot take before the tournament. Overall I don’t have anything overly spicy since, in my opinion, this EU Masters has been more or less unfolding how it was expected to.

I suppose if I had to pick one take that’s potentially nuclear, it would be Karmine Corp not making it to knockouts and the LFL won’t have four teams in playoffs. Honestly, I don’t have too much to back my claim on this, but I have hope that GamerLegion, in particular from the Prime League teams, will step up in Round 2. If they step up, I can see Karmine Corp drawing the short end of the straw in Group B, though it should be very close.

The EU Masters Main Stage resumes tomorrow with BISONS ECLUB taking on LDLC OL. You can catch the action on the EU Masters Twitch channel.