TES Tian: “For last year, although [FPX] had some problems, the past is the past. The 2022 World Championship is more crucial to me now.”

From constantly playing second fiddle to the LCK for most of the first decade of the League of Legends World Championship, the LPL has since become the world’s best region having won three of the last four editions of the competition, and considering this year’s crop of teams, it is expected they will do the same this time around in North America.

Lots of players and teams made such a swift turnaround possible for the LPL, among them, jungler Gao “Tian” Tian-Liang. He joined FunPlus Phoenix in 2019 after having a short-lived stint with Suning, thus creating one of the best teams in the league for the next three years. As FPX’s starting jungler, he led the team to win the 2019 title and another Worlds appearance two years later.

While Tian struggled throughout the 2021 season, which included an extended hiatus as a way to resolve his mentality issues and a shocking group stage exit in Worlds, he helped maintain FPX’s place at the top of the league by regularly finishing near the top of the standings in each split.

Looking for a fresh start, Tian joined Top Esports in the 2022 off-season to continue his pursuit of success both on the domestic and international front. Despite not winning an LPL title, through Tian’s contribution, TES entered Worlds 2022 as one of the favorites to win the Summoner’s Cup at its end and continue LPL’s stranglehold on the title for another year.

Following TES’ match against DRX, Tian spoke to BLIX.GG to discuss his thoughts on the teams he’s facing in his group, how he adjusted himself for the 2022 season after suffering mentality issues in 2021, whether he’s in the best condition in his career, and more.

Pedro Romero, BLIX.GG: I'd like to first cover the recent match that went down with DRX. What was the team's approach toward facing the LCK fourth seed? How did the plan transpire? What went wrong? And what do you think could have gone differently?

Gao "Tian" Tian-Liang: Before the game, we went ahead and chose a draft that had lane dominance in all three lanes, but during the actual game, there were so many accidents happening that we just performed passively. The opponents seemed to not give us any opportunity to make a comeback. Also, we didn't manage to catch the opportunity to punish them so after that, we didn't manage to get the win.

Tian: For Rogue, they really played well together as a whole and were able to have an early game tempo by playing around the jungler because he can really seek many opportunities to make the early game ganks. They really have a very aggressive playstyle to seek more opportunities to open given situations and also be able to have a very good team fight propensity. But for GAM, I felt they were able to look for more skirmishes and the laners can really have very good coordination with their jungler to open the situation through such skirmishes.

BLIX: Taking attention slightly away from the competition, I'd like to know how have you personally adapted to playing in North America.

Tian: I believe the main problem with the long travel is definitely the jetlag. Because of that, we really needed to have a very good rest. As for the food we've been eating, I've kind of gotten used to it and I think the most important part is definitely to try our best to have a good rest. 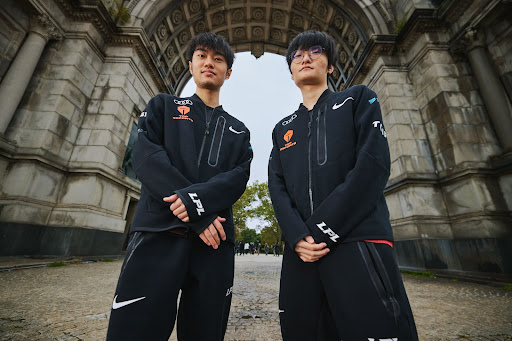 BLIX: You mentioned in a prior interview while reflecting on the 2021 season, you felt you weren't fully prepared for that year and ignored other more pressing issues to continue playing. In reflection of that, what did you do to ensure that you were fully prepared and in top condition throughout this past season?

Tian: From last year, the main thing was that I had some problems in my own mentality, but coming into this year, in terms of in-game content and the team's coordination and synergy, we were able to perform these parts so good to the point where I can have many ideas about the game and actually give them a try during matches. Those good attempts can actually motivate us to perform even better. I feel this part is very good this year. Also, in terms of my current form, I think I still didn't manage to have a very good form in past Worlds tournaments until now.

BLIX: Speaking of the event, it does bear mentioning you played with FunPlus Phoenix in last year's edition who bottomed out in the group stage, surprising many fans and analysts alike. Looking back at how that team fared, what do you think was the reason for their subsequent performance? Was it just a result of one singular factor or multiple things happening at once that altogether affected the team's performance?

Tian: For last year, although we had some problems, the past is the past. The 2022 World Championship is more crucial to me now.

BLIX: So far in the 2022 season, you've done pretty well for yourself. You finally managed to crack that MVP award that had long eluded you throughout your career. At this moment in time, do you feel you're at best that's better than what you showed in the past including Worlds 2019 where you won the title?

Tian: I believe it's very hard to say before my retirement whether this is my peak condition or not, but compared to 2019, I believe I've experienced some improvement and there are also different parts that I got stronger in. That's because back then, maybe I just thought less in the games but now I would like to just have more strategies in place during matches.

Tian: Compared to the 2019 version of myself, I believe I'm now more mature and I also hold more responsibility. Additionally, in matches, I really learned a lot through this whole journey so it feels like I've now made various improvements.