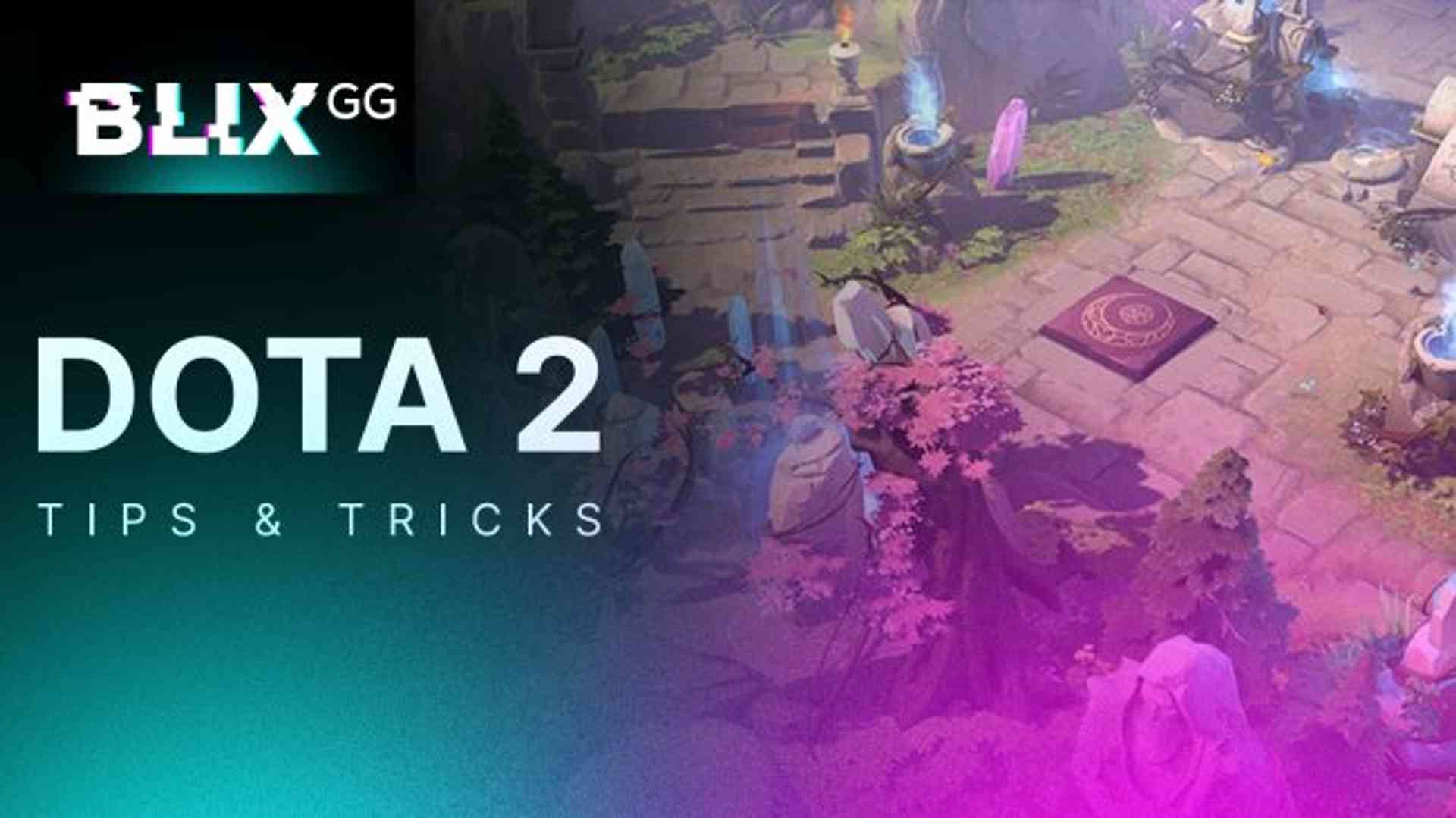 MOBA games are notorious for being complex, especially for people with no previous experience. Dota 2 is probably one of the best examples because it’s widely considered the most complicated in its genre. This won’t come as a surprise to fans of the game; it features 121 heroes, a huge array of items, and thousands of possible combinations.

Once players learn the basics, they then have to learn the numerous tricks used by experienced players. Some strats are more advanced and will take time to get used to, whereas others are easy to pick up.

Attempting to explain everything in one article is not easy, even for someone with a lot of Dota 2 experience. Despite that, we’ll try to go over some of the top Dota 2 tips and tricks everyone should be aware of. Hopefully, these pro tips will help improve your Dota 2 experience.

One of the first things you have to remember before you start playing Dota 2 is that the game receives regular updates. Several years ago, Valve released one or two new patches per year, and each one changed the game from the ground up. Besides adding new items and heroes, the updates introduced major changes to some of the existing heroes.

Some people liked these kinds of updates, whereas others were unhappy because the changes were too drastic. Those who didn’t have the option to play regularly had to rely on Dota 2 guides to learn how to utilize their favorite hero's potential

So, Valve decided it was time to change the way they released new updates. Instead of big patches, Dota 2 fans experience numerous smaller but more frequent updates whose main purpose is to balance some of the “overpowered” heroes. Of course, some of these patches bring more change to the table than others, especially when they include a new hero.

One of the first things you should do before you start playing is brush up on the current patch. Besides reading the patch notes, try to watch a few videos or read guides that will point out the best heroes, items, and combos. Once you have this information, you can use it to your advantage when playing.

Decide which position you like most and focus on it

Some of the popular tips and guides you’ll come across will focus on a particular position; such as offlane or mid. For more info on the five different positions in Dota you can check out our beginners' guide here.

Three of the positions are what’s known as “cores” because they focus on getting gold and purchasing items that allow them to be more useful later in the game. Besides the three cores, there are usually two supports. One of them is the “Hard Support”. Their job is to help the carry during the laning stage. On top of that, this player needs to ward and deward.

If being a “Hard Support” doesn’t sound interesting, you can also choose the so-called “position four”. Some of the best strategy tips for intermediate Dota 2 players are often based on this position because it can make a huge difference during the laning stage and the mid game.

In most cases, position four has some kind of ganking potential, which means he has to move around the map and try to set up kills. Needless to say, being a good position four players isn’t easy, so most people who take this role have some previous Dota 2 experience.

As for the core roles, the carry needs to secure as many last hits as possible so that they can purchase different items. The same goes for the mid lane, but this position usually plays a 1v1 format against their opposition's midlaner (although heroes often gank their opponents’ mid laners).

Finally, the offlane is a position where one or two heroes have to play against a duo or a trilane. It’s one of the most complicated positions in the game, so if you don’t know what you’re doing, you might die multiple times during the laning stage.

Once you know which position you want to focus on, pick a hero that fits the same role, and play it until you’re comfortable.

Learn how to use the minimap

One thing that differentiates some Dota 2 players is their ability to use the minimap. Some people read different Dota 2 camera control tips and know a thing or two about the minimap, but others have no idea how to utilize it.

The minimap, as its name implies, is a miniature version of the map. It shows different things, such as the lanes, towers, camps, and more. Since Dota 2 is a dynamic game, players need to keep an eye on it all the time so that they don’t miss out on something. This is especially true for some positions in the game, such as the mid lane. Once you notice that a specific hero is missing from his lane, it could try to gank you, so you have to be careful.

Another thing that you might not come across reading tips is the fact the minimap allows you to “ping” and “draw” different things. Some people use this as a way to annoy their teammates, but you should try to use it to let them know about specific objectives, such as Roshan being up, or a tower under attack.

Be nice to your teammates

One of the important things that many Dota 2 players don’t take into account is the way they behave while playing. Some people don’t care about the win, and are playing casually, which is why they rarely spam or insult their teammates. Unfortunately, many players can be toxic about victory, and insensitive in their actions. That’s why one of the best starting tips for Dota 2 worth paying close attention to is the one that encourages you to be nice to your teammates.

Some of you might think this doesn’t make a difference, but it has a massive role, especially in pubs. Players lose hundreds of games just because they’ve titled the other four people from their teams, so being nice can help you gain loads of MMR.

Try to use the popular hero combos in the current patch

As mentioned earlier, one of the important things to consider is the current patch. We are yet to see a patch where every hero is balanced, which means that there will always be options that stand out. Needless to say, you should try to focus on them if you want to win as many games as possible.

Discovering the most popular hero combos in the current patch can happen in two ways. If you don’t have enough time to play loads of games, check some of the popular sites, like Dotabuff, that provide information about the game. Besides the tips for Dota 2 beginners, they also include information about each hero’s win rating. This can give you an overall idea of what to expect.

Despite the fact that many Dota 2 fans play for fun, others do everything they can to get better at the game. If you’re one of them, it’s worth it to watch replays of the best players in the game. Some people find it annoying, but most Dota 2 advanced tips recommended players to watch at least a few replays a week and use the PoV feature.

By watching the best players in the game, you can learn the ins and outs of a specific hero and use them to your advantage. Keep in mind that most professional Dota 2 players spend more than 10 hours a day playing. This means they definitely know a thing or two that can help you in your pubs.

Prioritize objectives over kills when possible

Watching replays can have a drastic impact on most people’s results, but not everyone is willing to go through this process. Some Dota 2 players prefer to learn while playing. If that’s you, it’s important to remember you should prioritize objectives over kills whenever possible.

Unfortunately, many inexperienced core players prefer to roam the map in search of easy kills instead of destroying a tower. Even though securing kills is fun and can be rewarding, there are cases where it can have devastating consequences. That’s because most core heroes in Dota 2 have different timings. In other words, a specific hero is really strong during the mid game or the late game and doesn’t do much after/before that.

Even players who read the best starting tips for Dota 2 make this mistake, and it’s usually one of the things that cause them to lose the game. So, think carefully about whether securing a kill is worth it because it may give your opponent’s core heroes enough time to get the item they need.

Many people focus too much on doing everything right, which often results in not having fun while playing. This is something that you definitely don’t want to do because you will either get bored or burned out. And, after a while, decide to play something else. Dota 2 is a complex game, but this doesn’t mean it is not fun. People who play with their friends and follow the best strategy tips for Dota 2 intermediate players can test different combos, special items, and much more. Whether you want to focus on gaining MMR or you’re just playing with your friends, don’t forget it’s a video game, the point is always to have as much fun as possible.