CFO Kevin Miller: “Even with a 1% chance of winning, we should always give it 100%...play your style no matter what, and whatever happens happens.”

CTBC Flying Oyster has certainly turned heads in the 2022 League of Legends World Championship group stage. Despite being the reigning Pacific Champion Series (PCS) champions and receiving a direct bye to groups, as a result of being slotted into a group with top-tier teams like Gen.G, Royal Never Give Up, and 100 Thieves, they were expected to struggle and largely reside in the bottom half of the group.

Instead, CFO held their own in the first half of the group round-robin play by defeating 100T to be well within the running in claiming one of the two spots available for the knockout stage. It’s a story that adds to the madness that is currently enveloping Worlds 2022, where anyone can beat anyone on their best day.

Of the CFO contingency that made their form possible so far in the competition is assistant coach Kevin Miller. Miller originally first broke into the LoL scene by forming the team that would become V3 Esports in the Japanese LJL. He would serve as the team’s manager, owner, and CEO for a year before parting ways in May 2018. Four years would pass before Miller received his next big gig, this time in Southeast Asia where CFO came calling for his services for the 2022 season. While that meant Miller had to leave his native Japan to live in another part of the world, he instantly jumped at the chance to continue his career. Needless to say, it’s been working out so far for Miller and the rest of CFO since then, which has so far amounted to a PCS title and a Worlds berth.

Following the match against RNG, Kevin Miller spoke to BLIX.GG on his team’s performance in the group stage, how he spent the time between working with V3 and CFO, how he was eventually approached by CFO, his thoughts on LS being a source of knowledge for his coaching ability, and more.

Pedro Romero, BLIX.GG: To start, I'd like to cover the match against RNG. Can you talk about what went down, the plan the team had going into the match, how it transpired, and what could've gone differently from your point of view?

Kevin Miller: I think the plan overall wasn't that bad. We had some poor execution, especially in the early game. We kind of got outplayed mechanically but I do think the draft could have been better. There are always people talking about itemization, drafting, and all that stuff, but I think, overall, if we just changed up a few champions, played a little bit more safe in the early game, and know when to take fights, I think next time we'll do a lot better.

On Gen.G and the next match up

BLIX.GG: Up next in CFO's group stage run is their match against Gen.G, one of the favorites to win the entire event. What do you think about that matchup and how your team stands against them?

Miller: People say Gen.G are the favorites to win Worlds so I do think it's going to be a very tough battle. Statistically, we're not supposed to win but I still think that, even with a 1% chance of winning, we should always give it 100%, make sure you go in with a good game plan, play your style no matter what, and whatever happens happens.

BLIX.GG: According to Leaguepedia, you had a four-year gap between managing V3 of the LJL and coaching your current team in CFO. As someone who remained within the scene, can you describe what you did during this period and how do you reflect on it?

BLIX.GG: To remain in close contact with the game for so long despite not having any job, how were you able to stay up to date with the constantly changing meta over the years?

Miller: I just like watching League. [laughs] One of the strengths of my being here is that I enjoy watching LoL games. I watch League all day, I love playing League. I love everything about League. I love its esports scene. I've just been watching, studying, commentating, trying to do whatever I can to stay fresh with the meta, and going over to a new region. I do think the PCS, at least from my point of view, is overall stronger than the LJL so it is a challenge for me to take that step up to see if I actually deserve to be here. With the team's success and my progress, I feel like I've done really well.

BLIX.GG: Eventually, you became a member of the CFO coaching staff for the 2022 season. What led to you joining the team's coaching staff?

Miller: I have experience working with the owners of the CTBC Bank for V3 and they liked what I did competitively-wise--maybe not so much business-wise, but they liked my vision and ideas so they asked if I wanted to try and move to a new country and learn a new language, and all the challenges that came with it and I was 100% down. I was always down to compete. I enjoy competing so even if I have to learn a new language, move to a new country, and all that, I really wanted to have another chance so I definitely took this opportunity to come here.

BLIX.GG: There was a tweet that was made by LS that acknowledged you as a follower of his for around four years. How much of an effect has LS, with his game knowledge and drafting philosophy, played on your coaching ability throughout your career?

Miller: I've been following LS for a long time ever since he came into the League scene. I have a lot of respect for someone like LS. His thought process about the game, his mindset, the way he approaches drafting and itemization--every minor thing that you can think of in League, I have a lot of respect for his knowledge and his influence. So yeah, I watched him a lot.

When I first started out, I was kind of like a follower of the meta where it is 'If the LCK plays this, I should just also do that, too. We should just copy what the winning team is doing." But now that I've opened my eyes after years of experience, I feel it's always best to play your style, and always think about what could we be doing better. It's not so much about what other teams are doing to win, but what could we do? And when we do something, do we fully understand it? For example, we're not just picking Aatrox because this other team that's really good is picking Aatrox. We're picking Aatrox because we understand why he's good, why he's strong, and why Aatrox have fit into our team comp. So definitely, I have been inspired a lot by LS.

BLIX.GG: What do you think has been the biggest aspect of learning under LS that you have utilized for your coaching?

Kevin Miller: Probably the way drafts go. When I first started out, I was very amateurish. I didn't know what was going on and I just copied people. In watching LS, even though he might not think it was good, I liked the fact that he went to Cloud9. I liked the fact that he was a coach. I enjoyed watching him draft and it made me think drafting is a very complex thing. There are more things you can do so I definitely opened my eyes to champion picks. That is something I was able to help contribute. Even though maybe on stage, we're not playing so many champions, the players are well aware of all the different picks that could happen especially with other teams. I think it helps them with their game information. Even though I don't push them too far on playing uncomfortable champions, they're definitely aware of all the different picks that are viable. 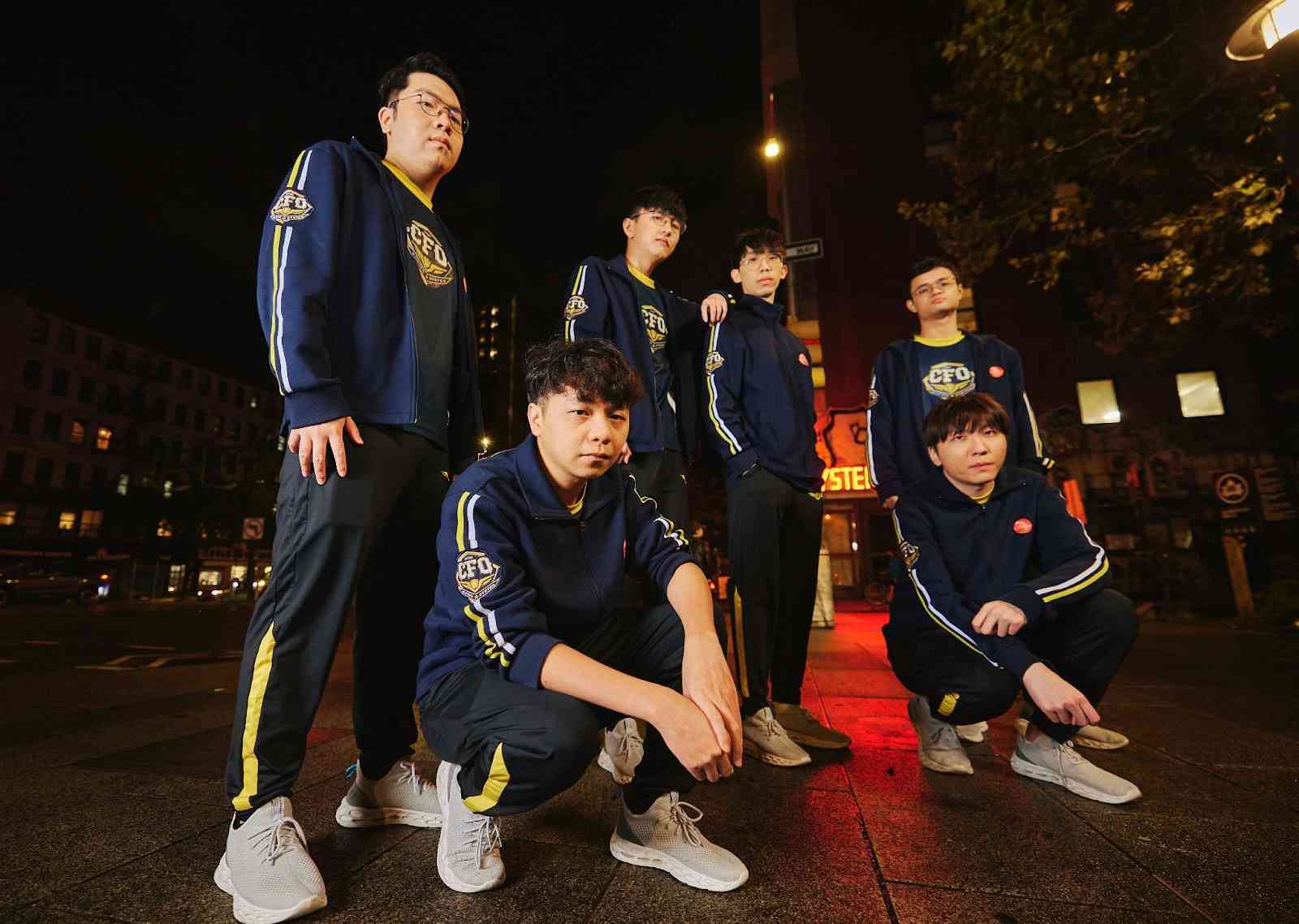 BLIX.GG: In consideration of the group CFO is currently in, which features Gen.G, Royal Never Give Up, and 100 Thieves, what has been the team's mentality in participating in this tournament from scrims to playing in official matches and the like?

Miller: I definitely think we're confident. We don't think we're the worst team in the group. Historically, the PCS isn't the best version. It's always the LCK and LPL and we have kind of acknowledged that. Beating RNG or Gen.G is going to be very, very hard, but I don't think anyone on the team is nervous or afraid. Even in today's game against RNG, although we didn't win, by playing on stage and listening to the comms, everyone was still collected, and everyone was still happy and fine. Everyone just played to their strengths and played it 100% and that's really all I can ask for. As long as we go into the game with a good plan, are confident, and just play to the best of our abilities, win or lose, I think we can always be happy with that kind of performance.

BLIX.GG: With this year’s PCS delegation for the World Championship considered, how much of a gap is there between the league and the other major regions in competitive LoL?

Miller: I definitely think there's a big gap between LCK, LPL, LEC, and us, but even though it's fun to joke about the LCS, I do think we are about their level. I think it's gonna take a lot of work and infrastructure to catch up with the LCK and LPL, but I do think we could probably be around the third-place European team if I had to guess. We've shown that we're better than 100 Thieves and we could maybe challenge C9 as the number one LCS team. I do think there is a gap among the top three, but beyond that, I feel the gap isn't that wide. I feel we can take games and we can win a best-of-five series against an LCS team for example.