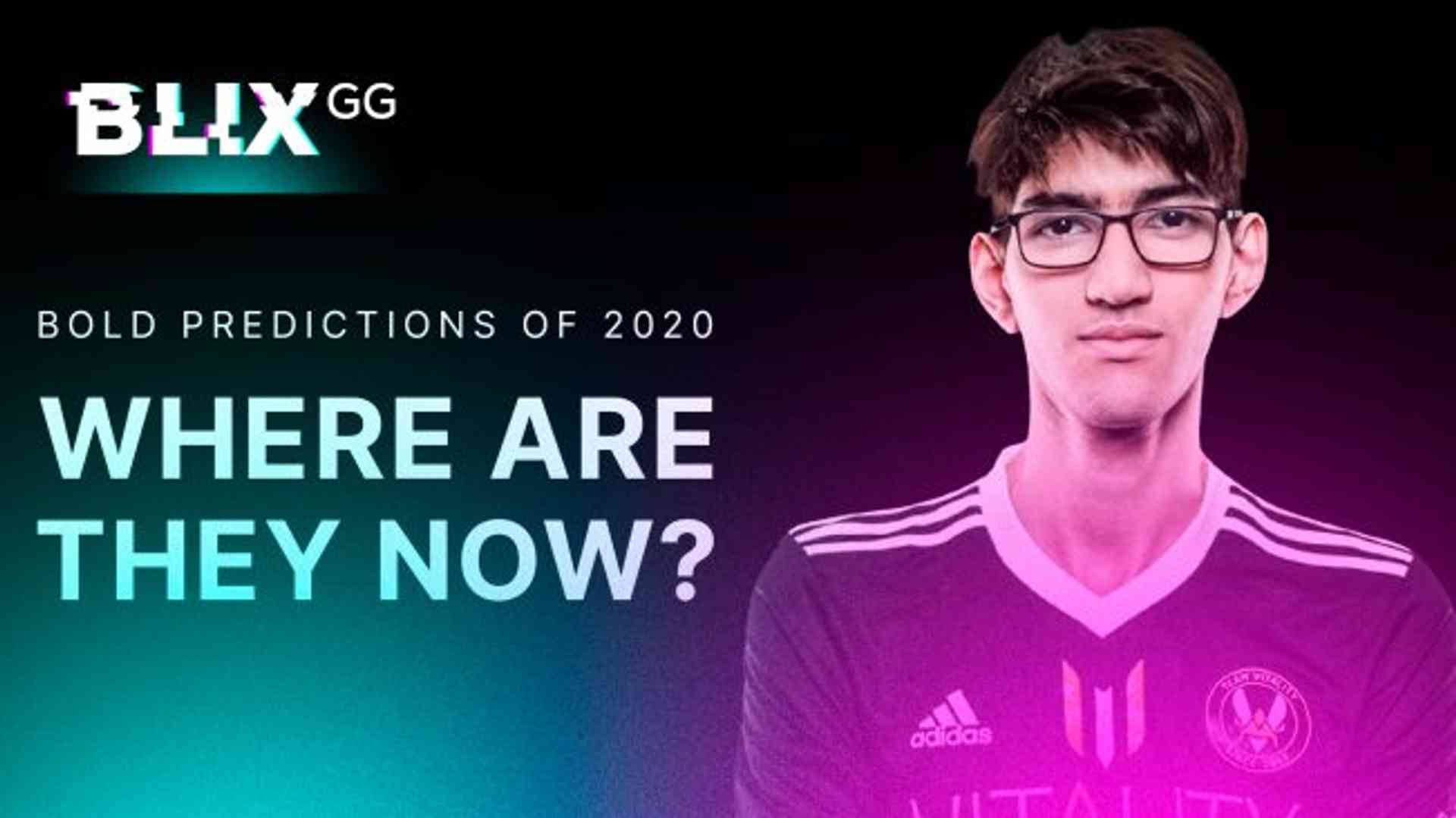 Every year HLTV.org produces a ranking of the 20 twenty highest-performing Counter-Strike players from that year. The order of these lists are highly anticipated and therefore heavily debated by fans and pundits alike.

The articles that are produced there include a segment where players are asked to provide a prediction regarding an up-and-coming player for the next year. These dubbed “Bold Predictions” have varying levels of accuracy, yet it is exciting to track the progress of these players and see if they lived up to the high expectations set on them from some of Counter-Strike’s elite.

When submitting their predictions, it is not uncommon for players to attempt to pick out the next superstar from their region and the first prediction on this list is no different. American superstar Vincent “Brehze” Cayonte selected Danny “cxzi” Strzelczyk. Danny got his big break when stepping in for tenured leader Damian “daps” Steele during ESL Pro League Season 12 North America. His successful stint with Gen.G as well as his strong end to 2020 netted him a move to Triumph in 2021. Throughout last year though he has struggled to break into the top level of play and has stagnated within the depths of the North American scene. He found himself bouncing from team to team and has entered 2022 without a team.

This was followed by Kaike “KSCERATO” Cerato who provided three names for players he believed could become stars in 2021. The first was Paytyn “junior” Johnson, a prediction that was shared by three other players in 2020, who at the time was linked with a move to FURIA. In 2021, Paytyn made the blockbuster move to the Brazilian outfit, however, their international endeavour failed to bear fruit and eventually led to the departure of the American in June. A short spell at Bad News Bears was what followed, where junior averaged a 1.26 rating. This stellar form landed him a place on the new Complexity project with ex-Triumph teammate Michael “Grim” Wince heading into 2022.

Ilya "⁠m0NESY⁠" Osipov was another name out of the mouth of KSCERATO. At the time, the 15-year-old already had high expectations placed on him. He performed excellently in 2020 with NAVI Junior, the team he remained a part of until late in 2021. His brilliance on that squad continued into 2021, with him having dominant performances at the WePlay Academy Leagues that took place last year. His superb statistics as well as his immense potential led to a move to the G2 squad heading into the 2022 season. A roster move that has got fans of the Valve game eagerly awaiting his debut.

FURIA stars Henrique “HEN1” Teles, Yuri “yuurih” Santos and the aforementioned Kaike “KSCERATO” Cerato all named members of the soon to be GODSENT squad which was under the leadership of Brazilian legend Epitacio “TACO” de Melo. Young Brazilian talents Bruno “b4rtin” Câmara and Eduardo “dumau” Wolkmer were touted as the next big thing by their compatriots due to their impressive spells in TeamOne and Yeah respectively. Throughout 2021, during their time together on the GODSENT squad, they have found success and reached a peak rank of #14 heading into 2022. These two players have been instrumental to the team in 2021, where they secured a Dreamhack Open title, a couple Cash Cups and made a final ahead of Team Liquid at IEM Fall.

The fnatic duo of Ludwig “Brollan” Brolin and Freddy “KRIMZ” Johansson both decided to pick fellow countrymen in Peppe “Peppzor” Borak and Leo “Svedjehed” Svedjehed. At the time, these two were relatively unknown Swedish up-and-comers with what seemed like heaps of potential. Peppe found himself signing as a sixth man for the fnatic roster in April of 2021 but never played a game for the squad. Ever since he has been a member of the academy team fnatic Rising, where he has shown a lot of promise and has continued to be one for the future for Swedish Counter-Strike. Leo for the majority of 2021, continued to play for Lilmix where he has been electric but he and his team have failed to enter the elite level of the game. Towards the end of the year, he joined Lemondogs, but the team are yet to field a complete roster as the 2022 season is getting underway.

Thomas “TMB” Bundsbæk was a player who garnered a lot of attention towards the latter stages of 2020, due to his stellar performances in his tenure at AGF. The Dane was praised by three of his country's finest and this eventually sparked a move to MAD Lions in early 2021. It became apparent that the Spanish organisation had goals of going international, a project spearheaded by ex-Virtus.Pro coach Jakub “kuben” Gurczynski. The last year involved a few roster changes within the MAD Lions camp as the team found very little success as Thomas transitioned to the IGL role. Heading into 2022, ambitious signings such as Viktor “sdy” Orudzhev and Michał “MICHU” Müller attempt to propel MAD Lions to new heights.

Now Astralis player Benjamin “blameF” Bremer shone a light on a Dutch star known as Shuaib “D0cC” Ahmad. Nowadays, D0cC primarily spends his time making videos on YouTube and streaming on Twitch and is someone who seemingly has immense talent and can compete at the highest level of Counter-Strike. Since leaving Defusekids in March of 2020, the Dutch AWP player has played little to no official games. Despite a brief appearance at BLAST Premier Fall Showdown with fellow streamer Nikola “Lobanjica” Mijomanović, where they played a close series against Heroic, to everyone's surprise, it seems as if Shuaib either doesn’t want to or cannot get a chance to play Counter-Strike professionally.

Towards the latter stages of 2020, Valeriy “b1t” Vakhovskiy was used as a sixth man for the Natus Vincere roster. This sparked fellow teammate Denis “electroNic” Sharipov to select the young Ukrainian as he performed excellently in his brief showings for the team. In April of 2021, the Ukrainian outfit decided to implement Valeriy full-time. This turned out to be one of the best roster moves ever made in Counter-Strike. The now 19-year-old has been an absolute revelation and has helped transform Natus Vincere into an unstoppable force since he arrived. He has already won eight tier-one events, including a Major trophy and Season 3 of the Intel Grand Slam. Despite it being Valeriy’s rookie year, he has handled the pressure with ease and emerged as one of Counter-Strike’s big stars. This unprecedented success meant that he was positioned 9th on the Top 20 players list of 2021 with the sky seemingly the limit for the young Ukrainian looking ahead into 2022.

Shahar “flameZ” Shushan was a popular selection when it came to Bold Predictions in 2020, with four players selecting him. Throughout 2020 and heading into early 2021, flameZ stood out as one of the next global stars. Whilst on Endpoint, he acquired a 1.12 rating and this garnered massive amounts of attention from European organisations who were looking for fresh talent to spice up their lineups. He eventually landed a spot on the Aleksi “Aleksib” Virolainen led OG squad where the young Israeli rifler has continued to grow and develop and has averaged a 1.09 rating whilst at the Red Bull sponsored giant. In spite of his individual prowess, OG struggled to find real success at a high level with their best result being a second-place finish at IEM Summer. However, with a leadership change rumoured to be on the way, OG is hoping that under Nemanja “nexa” Isaković reigns Shahar can shine brighter than ever before.

Danish AWP player Nicolai “device” Reedtz, who is dubbed the most decorated player in Counter-Strike, selected two young Swedish talents as his prediction for 2020. Erik “ztr” Gustafsson and Tim “Mann3n” Isak were the names out of his mouth, players who were newly signed at Young Ninjas. Fittingly, Nicolai found himself joining NIP in a staggering move in April of 2021. Upon joining, Nicolai and Erik found themselves playing alongside each other where they accomplished a second-place finish at Flashpoint 3. Erik, however, was benched from the team and demoted back to the Young Ninjas. Both Mann3n and ztr found themselves on the Young Ninjas lineup for the majority of 2021, with Mann3n ending the year without a team and ztr continuing his time in NIP academy.

Ukrainian hot-shot Aleksandr “s1mple” Kostyliev selected a fellow countryman in Volodymyr “Woro2k” Veletniuk as his prediction due to immense mechanical skill showcased in FACEIT Pro League. Volodymyr gained a spot on the MAD Lions project alongside the previously mentioned Thomas “TMB” Bundsbæk. He had monstrous statistics whilst playing for the Spanish organization being the team's best player and averaging a 1.16 rating. However, it came as a surprise to everyone when it was announced he was benched from the squad just as 2021 came to an end. Although he is heading into 2022 without a team, I imagine it will not be long until another team acquires this superstar's signature.

Last but not least, the best player of 2020 according to HLTV.org, Mathieu “ZywOo” Herbaut selected his teammate and sixth man Nabil “Nivera” Benrlitom. At the time, Nivera stood out as Vitality’s second-best player, averaging a 1.18 rating. The Belgian showed immense promise and was living up to the standards set by his brother Adil “ScreaM” Benrlitom. Due to Valve’s changes to the rules regarding substitutions, he found himself benched, a move that was unforeseen by the community. Since, Nabil has transitioned to Riot Games competitor - VALORANT, where he currently plays alongside his brother in Team Liquid. Nivera seems settled playing in the Dutch organization and a move back to the Valve game doesn’t seem on the cards, at least for now.