CSGO teams' ranking is ever-changing as some tumble while others rise to the top making it dynamic from one tournament to another. “Dominance” is only temporary, an era might begin but never lasts with no team standing alone on top of the mountain forever.

2022 was a remarkable year with the incredible stories we’ve witnessed, The underdogs prevailed while the big dogs crumbled on the biggest stages.

The last few months were rough for a lot of the big teams that topped the rankings on HLTV at the beginning of the year. Where are these teams now and how different is the top 10 list after 11 months of intense competition? 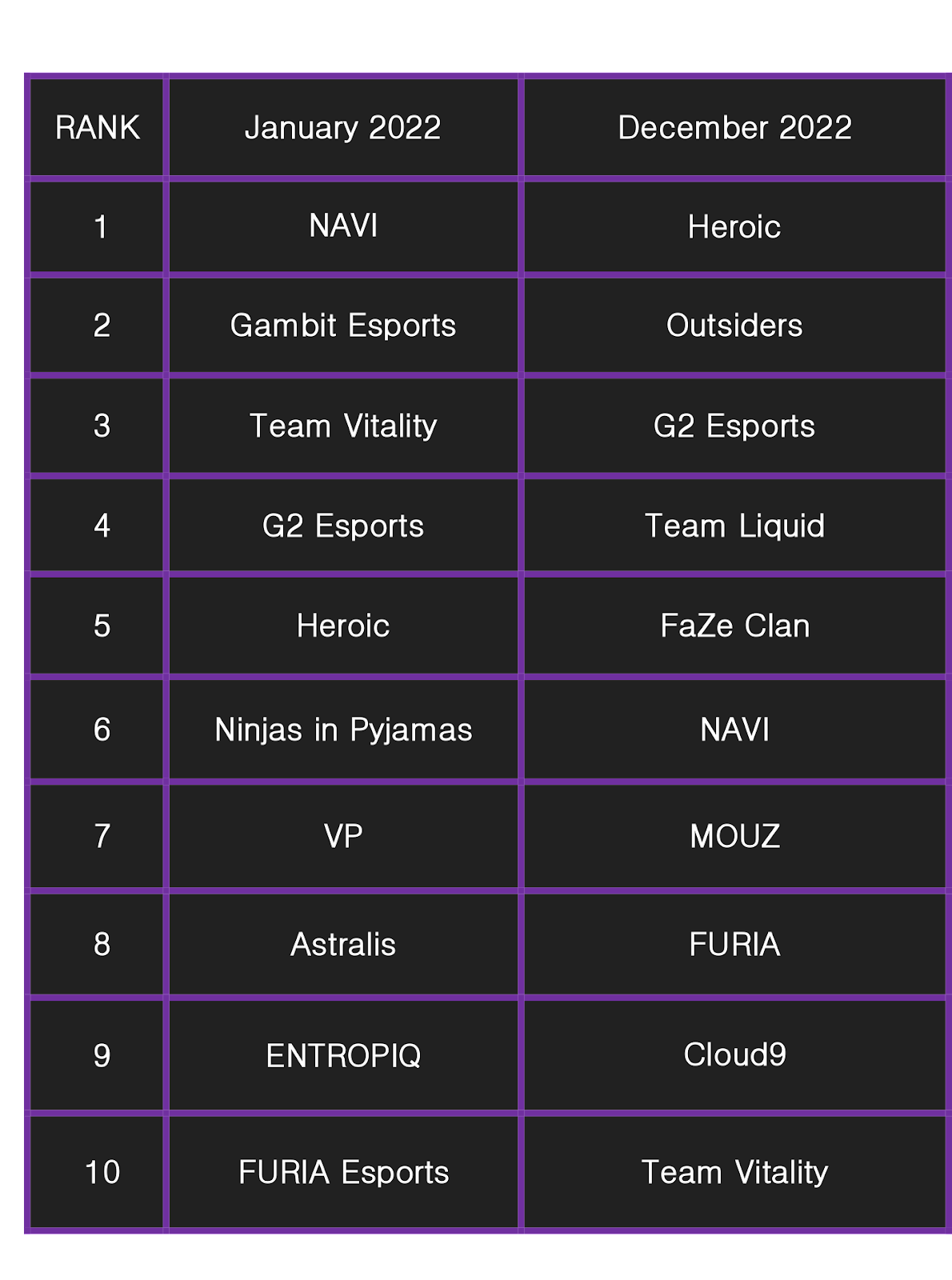 The standings for the top CS:GO teams in both January 2022 and February 2022 showing the fall of NAVI and the rise of teams such as Heroic and MOUZ. 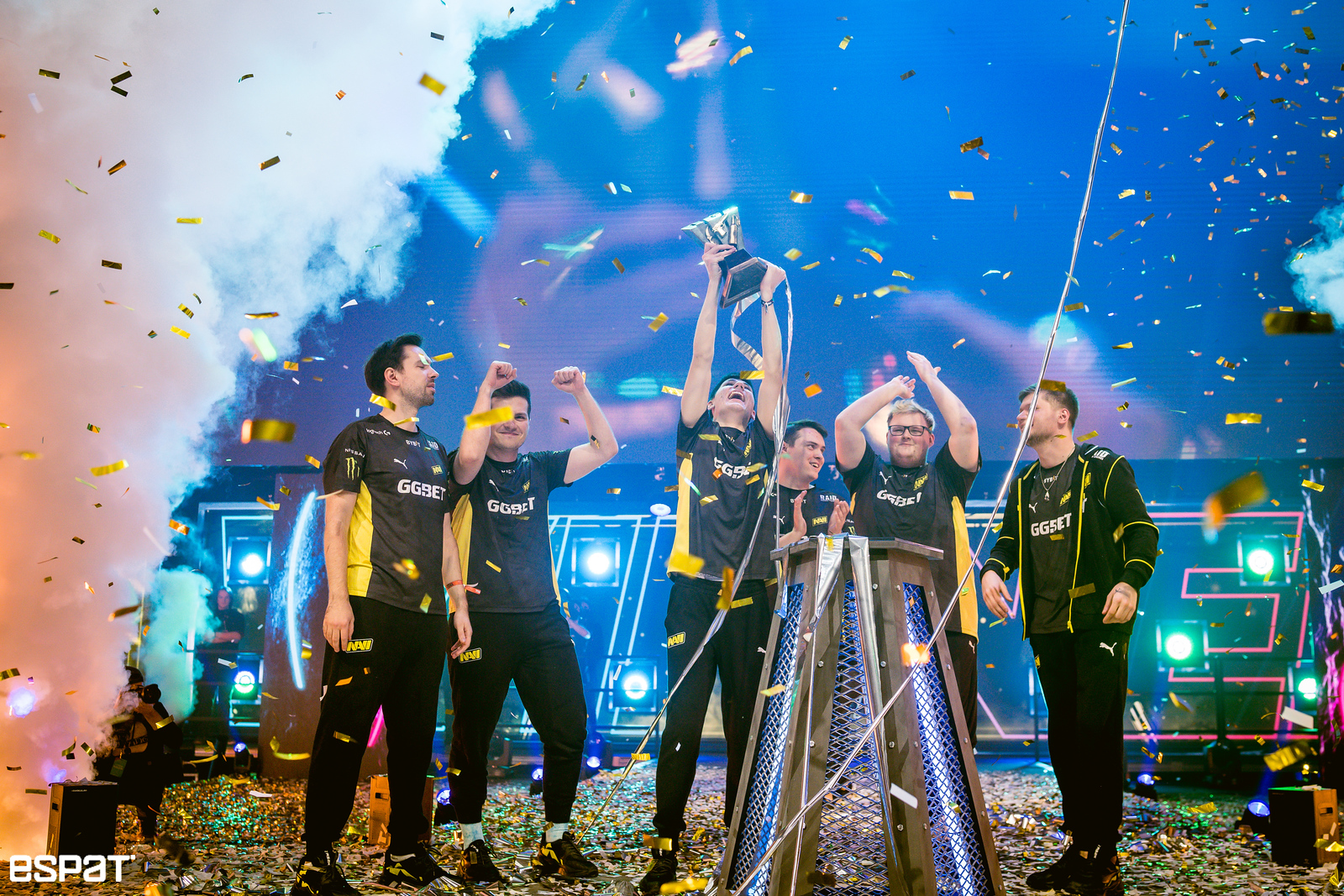 From all the great teams and runs we had in CS:GO esports, it’s hard to find a consistent team that would be as great as the Astralis era.

Just when we thought the Na'Vi era started they quickly fell off regardless of their impressive results and performances during 2021, their start of the season wasn’t that impressive and quickly fell after the removal of “Boombl4” which resulted in an endless cycle of bad results considering “sdy” didn’t deliver the performances Na’Vi hoped for.

Attempting a six-man setup during BLAST Premier World Final 2022 with an academy player “npl” is a clear sign that the team is going through a rough period since the six-man setup was proven to be ineffective by previous teams, though it was stated by “B1ad3” that bringing “npl” was to give him an opportunity and create competition for “sdy” and the ultimate result was a 5th-6th placing keeping its fans curious on how will they approach the new season for better results. 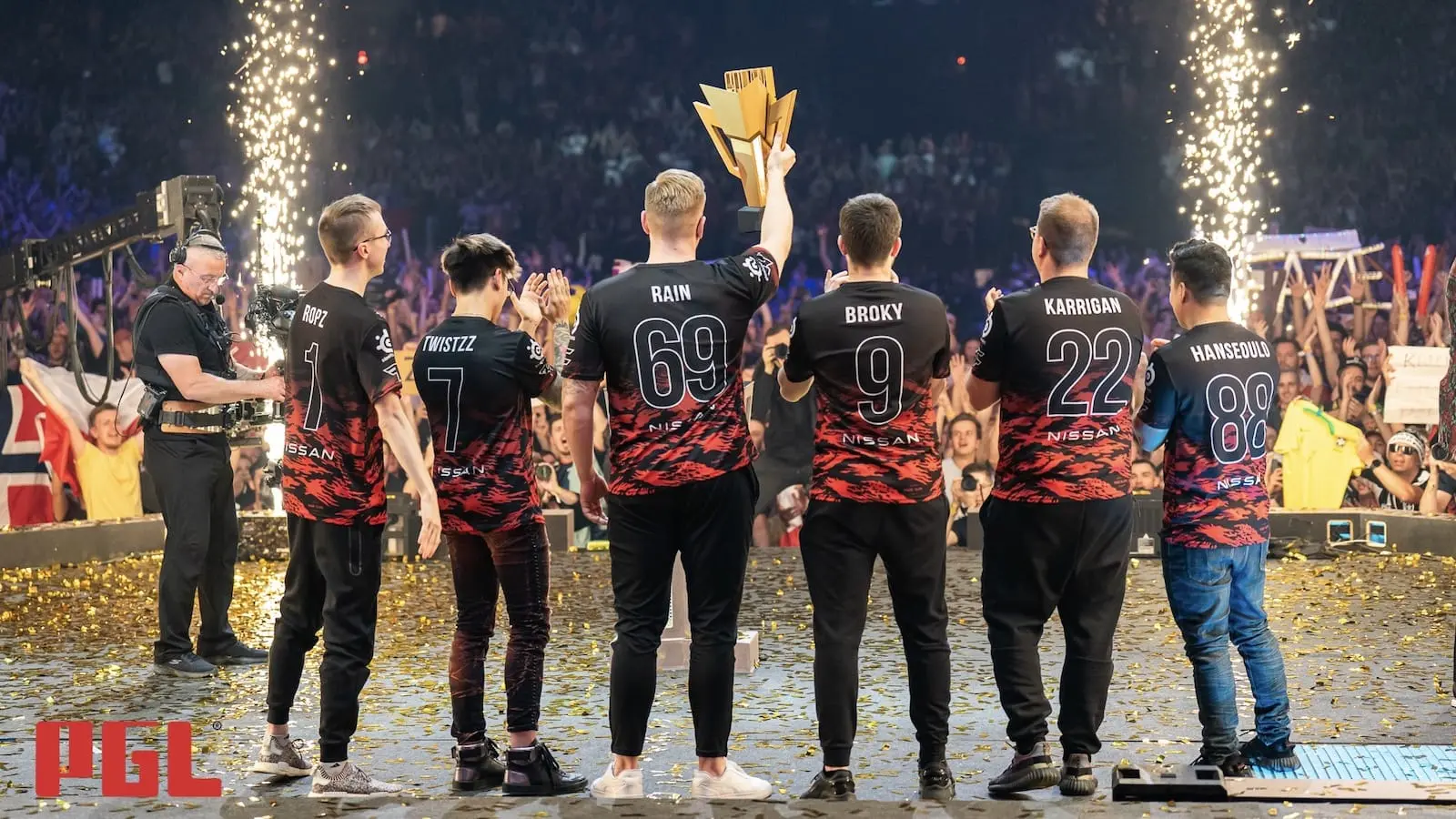 The international lineup started the year strong with wins at IEM Katowice, ESL Pro League Season 15 then securing their first Major in Antwerp in addition to IEM Cologne with one step closer to securing an Inter Grand Slam.

Up to the second half of the year, FaZe Clan sat respectfully on top of the mountain, with a heavy lineup consisting of the best players in the world. It's no surprise.

ESL Pro League Season 16 was the start of their regress and shaky results followed by an unexpected disastrous elimination at IEM Rio from the Legends stage without a single win.

To their credit, it was an awesome year for them with so many positives regardless of the step back in the last 3 months. 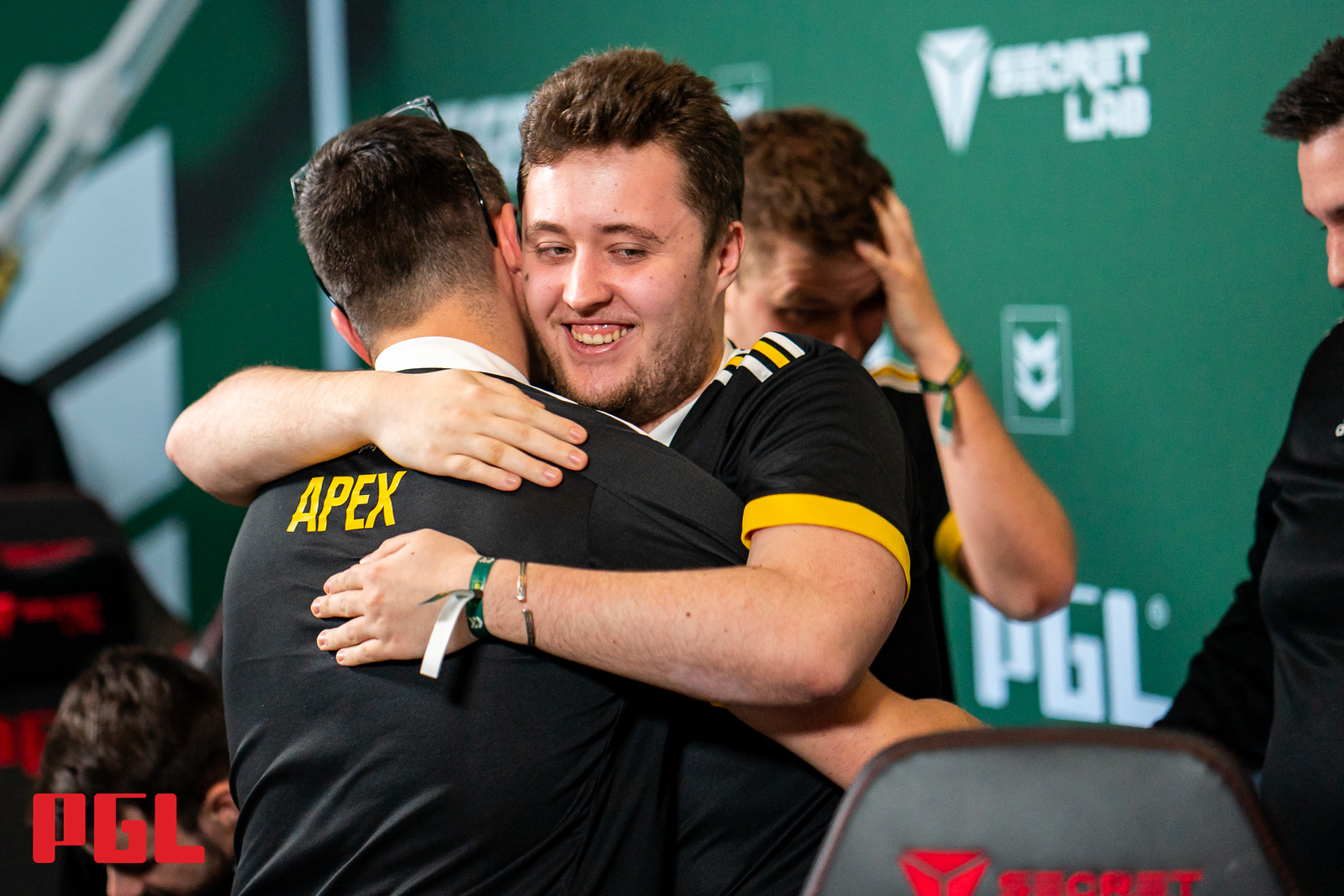 The announcement of “Dupreeh”, “Magisk” and “zonic” sparked some hope for the hornets to finally win some tournaments and make themselves a feared team, the only problem is that it never happened.

Getting eliminated from the early stages of most tournaments seemed like a continuous pattern regardless of the stacked lineup, “Spinx” was later added and managed to win their only tournament this year ESL Pro League Season 16.

As some teams somehow show incredible performances at Majors, Vitality wasn’t even close, failing to make the Playoffs stages in both Antwerp & Rio, ironically losing their match against none other than Spinx’s old team. 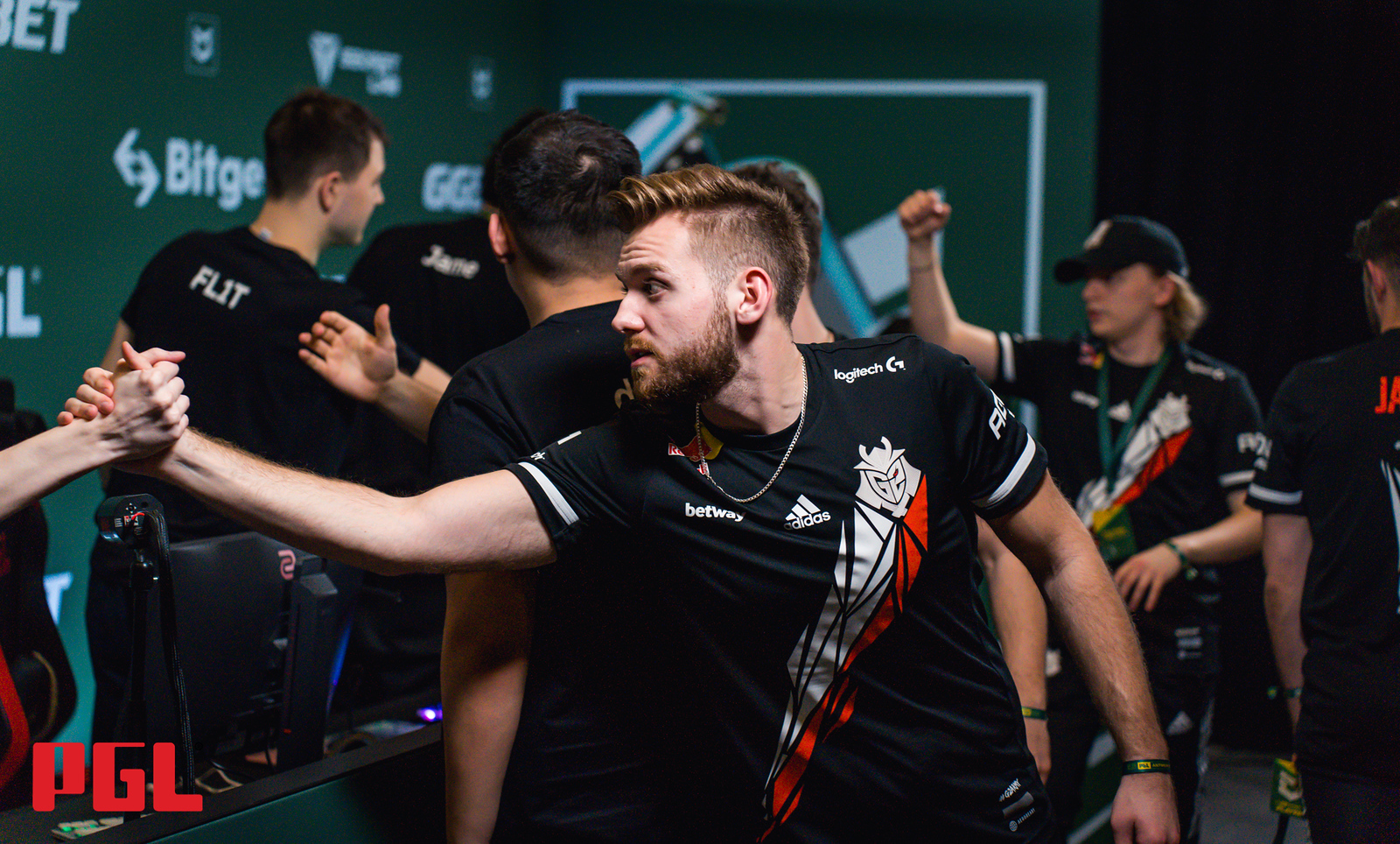 G2 players shake hands with their opponents at the end of a game of CS:GO at the Antwerp Major

Acquiring a young prodigy with the potential of becoming one of the best AWPers in the world can only be positive and beneficial for the team, long if not short term.

bringing in “Aleksib” & “XQTZZZ” seemed like a good move on paper but failed on the server, the best result they achieved during the first six months was second place at IEM Katowice. in August, another wave of signings happened after “JackZ” was acquired by HEET, benching “Aleksib” and signing both “jks” and “Hooxi” after the success they showed with FaZe Clan & Copenhagen Flames.

The real test and goal were supposed to be IEM Rio 2022, again “was supposed to” but G2 managed to absolutely surprise everyone as they didn’t even qualify following losses against Cloud9, 1WIN & GamerLegion!

Not making it to the Major created a big discussion around the community trying to piece the puzzle together, is “Niko” the problem? What happened? How will they recover?

Luckily for the team, they ended the year on a good note lifting their first trophy at BLAST Premier: World Final 2022, a big success for both “Hooxi” as an IGL & “Niko” who finally won a LAN after over 1000 dry days without a title to his name.

We can’t talk about 2022 without mentioning the unexpected and incredible run of Heroic, MOUZ & Outsiders at the IEM Rio 2022 Major.

MOUZ is a prime example of a successful academy, with three promoted academy players in addition to their coach they managed to go far and reach the semi-finals of IEM Rio.

Perhaps it was impossible to predict this run as it might not ever happen again, with average stats for the ex-academy trio it certainly wasn’t luck considering they beat Outsides, Team Liquid, Team Vitality, ENCE, and Cloud9 to reach the Semi-Finals.

The fact that it happened will live on as a memory for the upcoming years of Counter-Strike history.

Heroic never received the recognition they deserve among the best teams in the world, they were heroes that created their own story with their impressive runs at Majors.

Leading up to IEM Rio, The Danes were 1st at Pinnacle Winter Series 3 & Championship stacking enough points to keep them at the top 10 tables.

Surely it took immense resilience to eliminate FURIA with a packed arena full of Brazilian fans screaming their lungs out making more pressure. Even though they lost the Grand Final they sure earned everyone's respect becoming a team to keep an eye on. 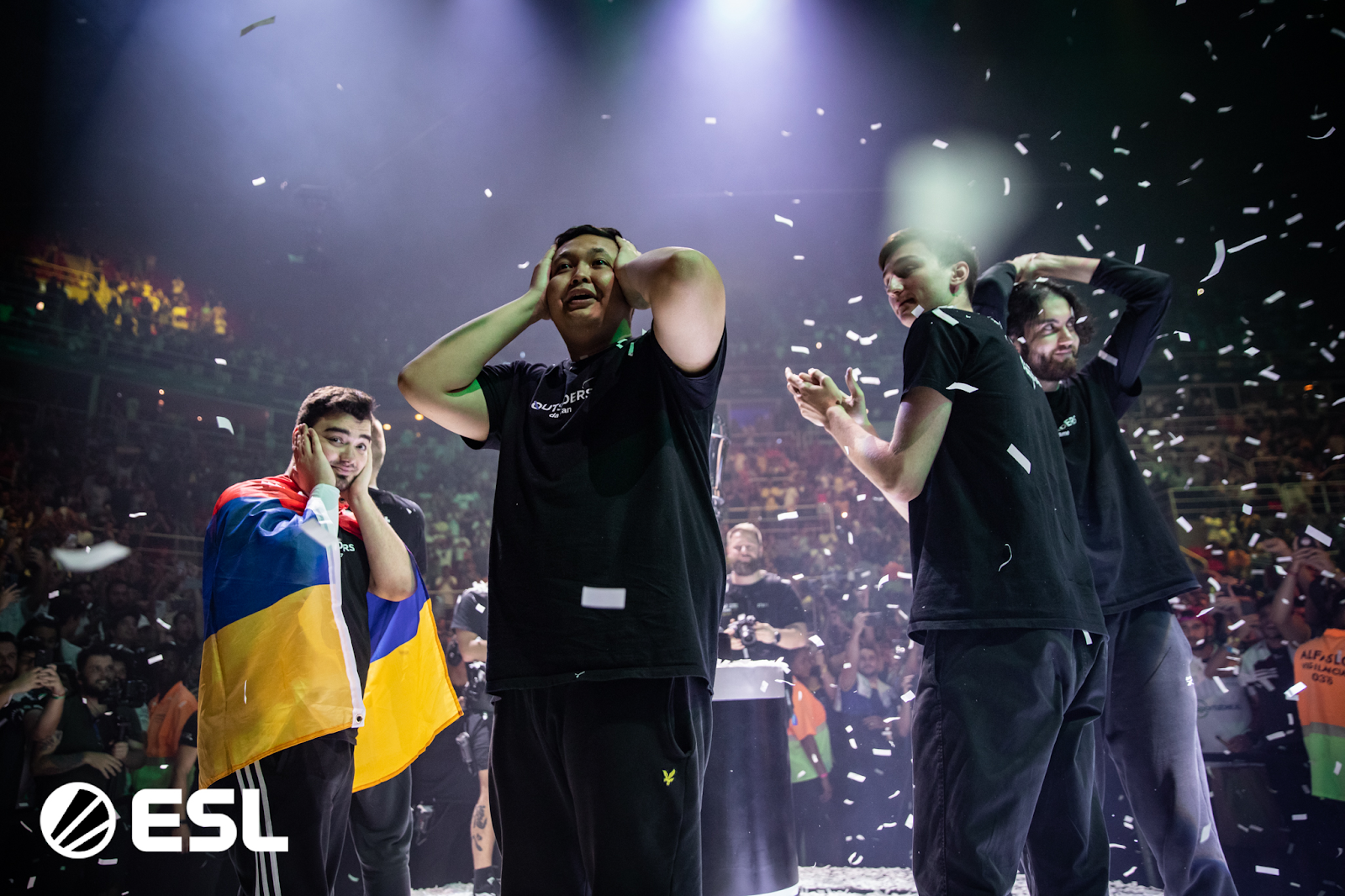 Outsiders have brought the joyful memories of the old legendary roster under the VP organization winning yet another Major only this time it was impossible to predict.

Up until late May the team couldn’t find its rhythm and struggled quite a bit but all that changed after benching “YEKINDAR” & “buster” and signing the ex-K23 players; “fame” & “n0rb3r7”. little did they know that this roster move would have the best possible outcome, winning ESL Challenger at DreamHack Rotterdam 2022 was nothing but an appetizer to a bigger and better main course where they let their hunger leash out upon all the teams that faced them in front of one the craziest crowds we’ve seen in Counter-Strike at IEM Rio 2022.

Nothing can top the hunger to win a Major trophy. After all, it was the ones that starved who became Major Champions.