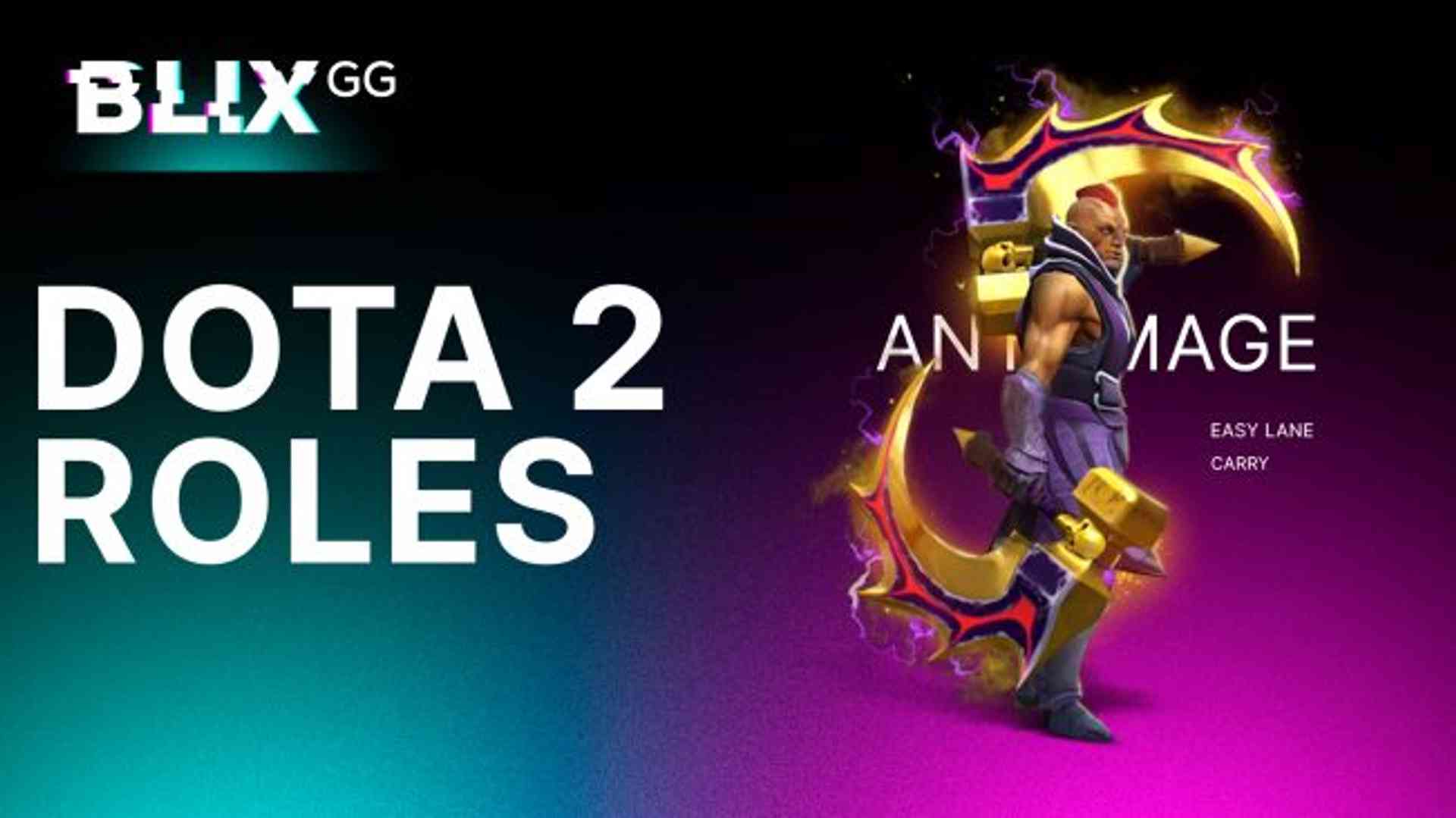 Ask any Dota player why they play the game, and you’ll immediately get an answer; it's exciting and challenging. The feeling of triumph (even more after a long match) overrides any emotion spent there or received from a defeat. Dota requires deep knowledge, patience, tactics, and meta-understanding from players. But it rewards accordingly.

What’s in a game?

Watching Dota and playing Dota are entirely different concepts. Watching the game, you might not notice the game-changing details; but while in the match, you’ll need to take into account a million little things. Building your own game out of bricks and, of course, remembering your opponent, trying to predict and calculate their actions.

On top of this, Dota is a team game where winning depends on good chemistry between players and excellent understanding — much more than just personal skill. Need an example? Take a look at Team Spirit, OG, and Team Liquid, the latest TI winners. Of course, high-quality players are essential, but it is almost impossible to achieve something meaningful without cohesive play from five different heroes with different tasks and capabilities.

A team; it’s the players who win, all together. And they lose together too. Sometimes in pubs, a midlane player snowballs, going 20-0 and destroying everyone; or, when the opponent's throne falls, your core is just about to leave the jungle. But maps like these aren’t the standard Dota game. Most often a win is the result of a good combination of heroes and behind-the-scenes supporting work, combined with the opponent's low class, and their likeliness to tilt.

Dota is played by ten people, five on each team. The game's goal is to destroy the main building at the enemy base. Naturally, all this is complicated by hero item builds and the game’s frequently changing meta. In this guide, we’ll break down the lanes and positions, providing a clear overview of the game to help new and casual players.

Lanes in Dota 2 — Cores and Supports

Dota has three lanes and five players to distribute. In general, it always turns into 2-1-2, and the lanes are divided into a hardlane (aka offlane), a midlane, and an easy lane (safe lane).

A Bit of Trivia: Back in 2019, the 3-1-1 formation was viral; with the midlaner and offlaner playing solo while two supports were guarding the carry. Another popular meta combo was 2-1-1-1; where one of the players is farming jungle creeps. The developers have reworked the mechanics since those days — making it very risky to play with 3-1-1. It only bears fruit if the plan for the laning stage is implemented super-successfully. As for 2-1-1-1, in today’s meta, junglers have entirely vanished as a role.

For a clear map and role understanding, familiarize yourself with the image below: 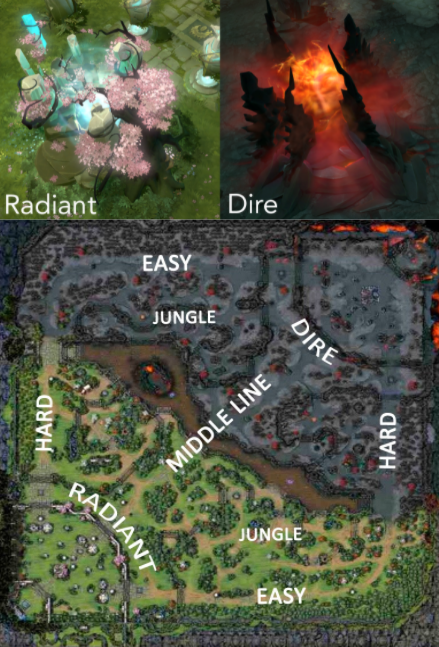 Before delving into the roles and tasks, let's talk about cores and supports. These are two categories of roles in the game whose duties are completely different. Cores are strong after the mid game, when they receive levels and artifacts. Supports play their vital role at the beginning of the game, thanks to their active spells; a support role’s main task is to help the cores reach their potential and win the game. Support heroes are objectively weaker than the core heroes — they can’t win the late game.

First, you have to decide what you want to do on the map. Finishing off creeps and taking responsibility? Dueling one on one to be the main driving force of the team? Leaping head first into a fight to distract your opponent? Help set up pick offs and kills by sacrificing yourself?

In Dota, as in life, you need to clearly understand what tasks you are best suited for; what you like to do, and most importantly, what you enjoy. Otherwise, your games are likely to turn into suffering and failure — without any positives.

Let's take a look at the general tasks of each player on the map by their role.

Dota 2 Roles — What does each role do?

Carries have their peak of strength in the late stages of the game. So you need a lot of gold and experience. In the early stages, they are very vulnerable and practically useless. So artifact order and pick are vital; need help to unleash potential.

Midlaners are effective with an experience advantage. Objective: quickly gain experience and reach the peak of strength as early as possible. The most demanding role for micro-control skills.

Offlaner is a less farming hero who needs to be solid and dense to initiate fights and tank. You'll have to prevent the enemy carry from farming at an early stage.

Supports pair with the offlaner to intercept enemy carry's farm. They help on other lanes, if necessary, get artifacts for the team's sake. Creative dudes.

Hard supports provide care for their carry, literally nurses them at the beginning of the game, most often a character with healing and/or control.

Positions are numbered in order of farming priority.

If you want to learn more about heroes in Dota 2, we recommend this guide. It includes info about roles and mechanics, hints of which heroes are the best, and much more!

Now let's talk about human temperament. Yes, it’s important too! After all, what's the point of playing the offlane role if you want to farm jungle creeps and decide not to risk much?

A carry must be able to figure everything in the game in advance and be very calculating. Even at the stage of choosing a hero, everything should be thought through: should you pick a versatile hero — like Wraith King (WK), Sven, Monkey King (MK) or Morphling? Or should you pick one that is unlikely to be countered — Anti-Mage (AM), Terrorblade (TB) or Drow Ranger?

Your item build and the plan for the early stage must be formed before the creeps even enter the lanes. It’s important to stick to timings and be aware of your strengths. The whole game is up to you. Are you ready to take responsibility for yourself and act according to your own tactics, despite what’s at stake? (Possible flaming coming from your teammates, for one.) Do you understand you can’t help your team if you’re not confident in your own abilities? It's hard, you know, playing the leading role.

Drow Ranger and WK, mentioned above, and Luna, can all do wonders — even in the hands of a fresh-faced carry — and are a safe bet for beginners to the role.

Impudent, daring, and self-confident fast-fingers — the Midlaners. If pos1 is about calculating and fulfilling the micro-goals of their own plan, mid players should be risky, aggressive, communicative, but also able to control their emotional impulses. A silent midlaner who’s not in charge of the game will not win it solo. Of course, this role requires tremendous mechanical skill too. But you can handle it, you're a rock star!

If you’re ready to flex it as a midlaner, start out with old favorites. Viper, Zeus make great beginner mid picks, or go full Davion with a Dragon Knight.

Trolls, that's who they are. Damn trolls. Offlaners need to do everything possible to tilt the enemy carry during the laning phase. Preventing them from last-hitting creeps through denies and cutting the lane. Or just outright killing them. Of course, it happens that you need to be patient against a strong lane comp (for example, Juggernaut and Lion), so be aware of your strengths and weaknesses.

And in the late game, you need to feel it and initiate fights, separating cores from supports, creating chaos. It’s your duty to jump first… and possibly die for the greater good! Bristleback, Tidehunter and Centaur Warrunner are all excellent choices to help beginner offlaners shine.

The freest role on the map. A role that seems like it was made for creative types; but it also imposes great responsibility. You need to be everywhere at once — help kill enemy carries, help your mid lane with ganks, stack triangle, save your easy lane when they are ganked, get smokes and initiate fights, acquire teamplay artifacts, turn off enemy menaces — So many things, but which to do exactly? This is where empathetic people are needed, those who are able to communicate and understand other players' needs, as well as their own.

Pure altruists. Position 5 is for people who are willing to do whatever it takes for the sake of others. You’ll be flamed, taught how to play, and people will be dissatisfied with you; you will die and go broke. But your task is to ensure the comfort of the carry and help everyone on the map. Hence, the second most important characteristic for these players is the ability to plan and use strategic thinking. You’ll need to set goals for the team, ward around them, advise the midlaner, predict opponents' moves, and so on.

Hard Support is the most challenging and complex role in the game and the most underestimated. If you think you’re ready to sacrifice it all for your teammates and the win, try your hand at Lion, Skywrath Mage or Venomancer to wet your feet.

Thinking deeply about yourself now and trying to choose the best option? A little bit of self-reflection goes a long way in Dota 2, just like real life. Good luck!