The long-awaited DPC league is back! A month and a half of non-stop online Dota, six regions, Arlington, Texas Major, and the last chance to get to The International 2022 in Singapore. This weekly column will help you know the five most exciting matches of the week. It is surely, spiced up with some backstories.

But first, let's briefly recall the DPC Tour format. Each league has eight teams; it lasts for six weeks, and the clubs meet each other in Bo3 matches. The two worst teams in the upper league fall into the lower division (and, accordingly, from the DPC Tour, if we are talking about Division 2), while the best ones receive money, DPC points, and invites to the USA Major.

Here's a little about TI for this conclusive tour. Of all the leagues, there are already two teams that have guaranteed places TI invites: PSG.LGD and TSM.FTX. These teams scored the required 1200+ points, which mathematically secured their spots. Next on the list are OG, Gaimin Gladiators, Thunder Awaken, and beastcoast, who can solve everything out during the leagues even without participating in the Major. If they make it to the Major, Fnatic, Team Spirit, and Tundra should also score enough points to get to TI. All this information hints: that some teams can relax, while others need to seriously give everything they have to secure spots as soon as possible. You can browse through the current distribution of DPC points on the corresponding page of Liquipedia.

So, now let's move on to the main dish: the five best matches of the DPC Summer Tour Week One! 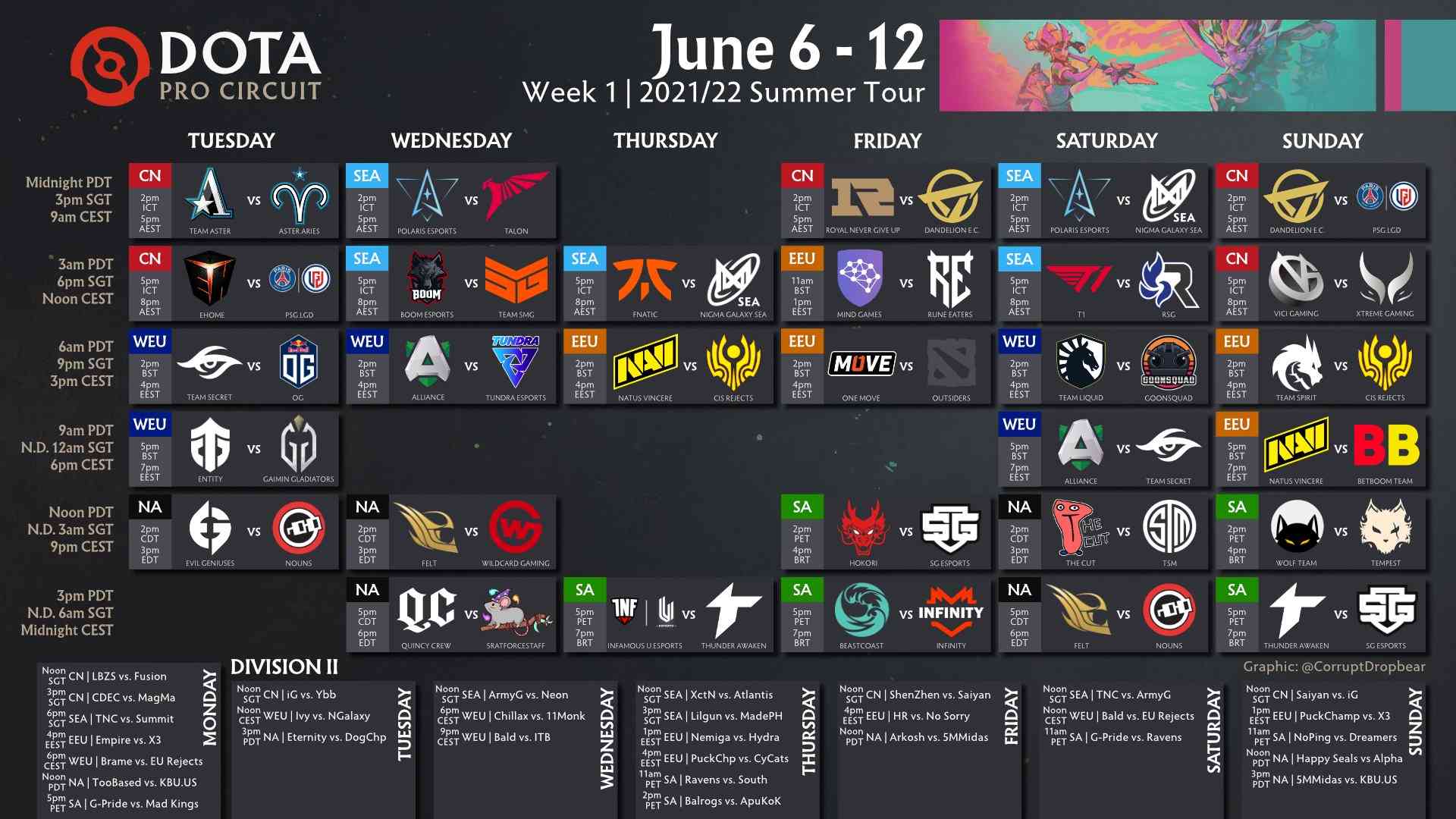 Why: Updated Secret will struggle against in-form OG

For Clement "Puppey" Ivanov's team, this match will be the first serious test after the roster renewal and yet another change of Michał "Nisha" Jankowski's role. Newbie Remco "Crystallis" Arets came from Entity, and he's very good. Also, interestingly, during the break between the Major and the league, Daryl "iceiceice" Koh tried to find a team for himself (posted "lft" on Facebook). Still, the replacement did not happen, although, according to some insider reports, Secret was trying a few players out.

OG, on the contrary, performed very well at the Major with a stand-in (Sébastien "Ceb" Debs played instead of Mikhail "Misha" Agatov, and Johan "N0tail" Sundstein got Evgenii "Chuvash" Makarov covered as coach due to their visa issues). No one doubts that Misha will play perfectly after reassembling with the gang.

Most likely, it will not be a very difficult match for OG. The odds tell us they will win, but it is very interesting to see what Puppey came up with.

Why: 23Savage ready to shine again

It was not so easy for Talon Esports to reach the top division of the SEA League. In the first season, they finished in the middle of the table and played rather weakly, but already in the second tour, they rolled over almost everyone, giving only three maps, two of which went to the league winners from RSG.

Polaris made two roster changes (Nevermine and Tmv came in for Nikko and cml) and are ready to meet the newcomers.

Why: After 7-0 in DIV II, S4's squad face their first serious opponent

Liquid did look quite shaky at the Major, sometimes playing well against top teams while giving away and getting lost in matches with outsiders. They should definitely bounce back unless it's a Div II upcoming, which did a 7-0 run.

Goonsquad, on the other hand, played phenomenally last tour, proving to Alliance that they kicked the wrong guys (although Alliance also made it to the top division). If Goonsquad manages to compete with Liquid on equal terms, this will be a loud bid for the Major in Arlington.

Why: Xtreme is thirsty for Div I success, and Vici isn't ready

What could be better on a Sunday morning than a quality Chinese Dota? Xtreme almost made its last tour against PSG.LGD, and they learned their lessons. This time, they are expected to have high places in the final league table to reach the Major. The first opponents are the weakened Vici, and we recommend not missing this one.

The Major showed us that BetBoom is in perfect shape and can reach very high places. Even with Furion and Visage permanently banned. And besides the team's main star, Nikita "Daxak" Kuzmin, we saw that the squad is full of great players who are predicted to have a promising future.

Meanwhile, NAVI signed the young Georgii "swedenstrong" Zainalabidov to take the place of Ilya "ALOHADANCE" Korobkin, and they have also played several local tournaments lately. The team is prepared to fight. Don't miss it!