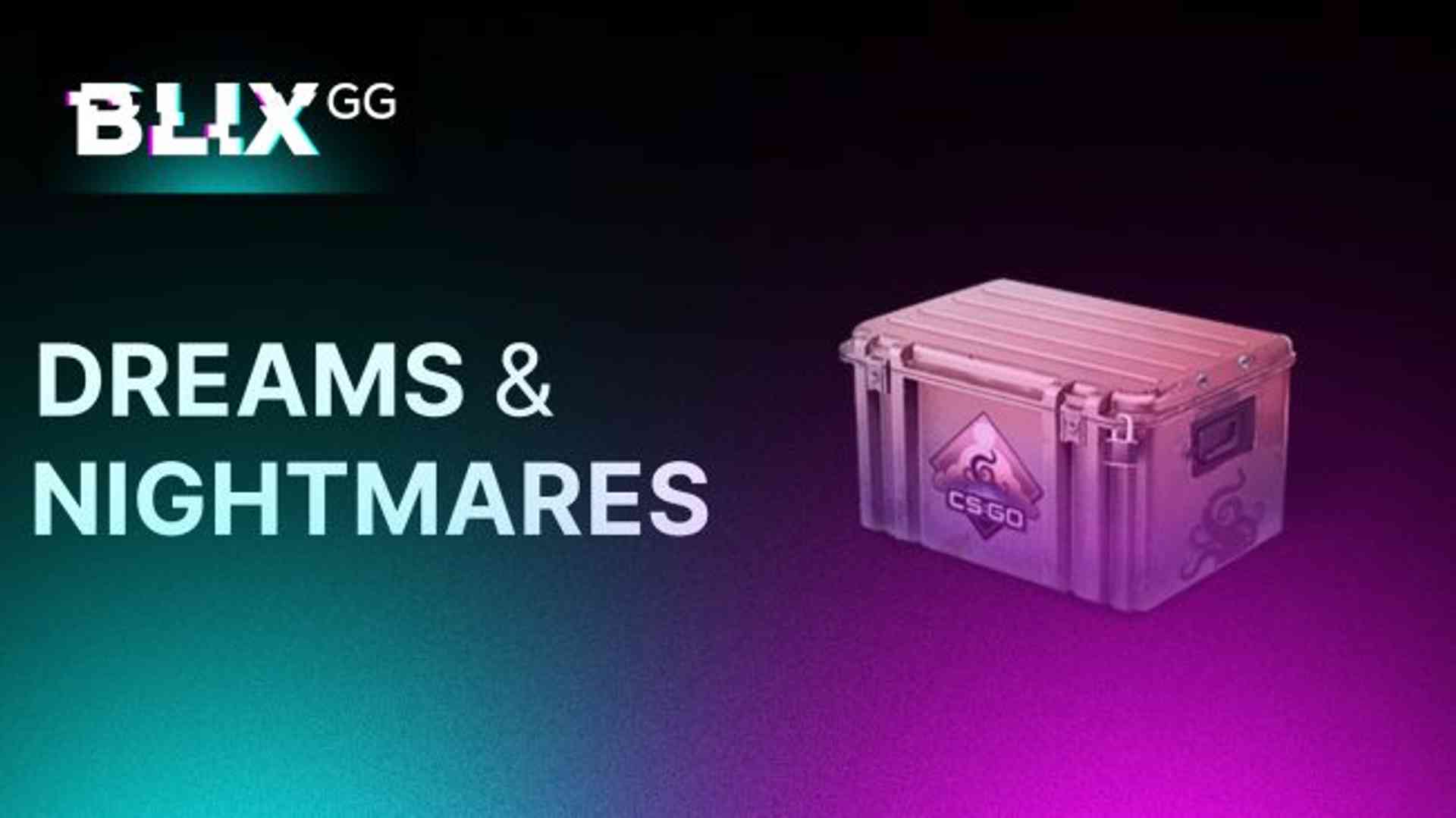 On July 21, 2021 Counter-Strike dropped an unexpected update or rather a one-of-a-kind contest, The CSGO Dreams & Nightmares Workshop contest; a 1 million dollars art contest to determine 10 new original skins under the dreams and nightmares theme for this new upcoming case.

It’s fair to say that this competition had artists all over the globe as excited and motivated as ever, with the total prize pool being raised to 1.7 million dollars and a total of 17 skins being accepted.

According to CS:GO this competition was designed to help further support the community and successfully transitioned into real work with countless artists showing their best work and making it harder for the CSGO team to pick the winners.

Since the announcements, Artists were given 3 months in order to finalize and submit their work. Skin after skin and day after day, the entire community was on the ledge waiting for the announcement of the winners and to finally see the new skins.

After a month from the deadline of the submissions, CS:GO finally revealed the winning skins and the work of the best among 15,000 total submissions from all over the globe, and here’s the full list of the skins:

The first skin of the case features cool cartoon monsters that represent ‘Nightmares’ with different colors, a long chicken head on the barrel to add more texture to the plain dark brown background in order to give it a more pleasant look.

This skin was made by Hook & KvaHu, 2 artists with multiple banger skin submissions into the workshop so far.

The skin is currently available on the steam market starting from 0.48$ 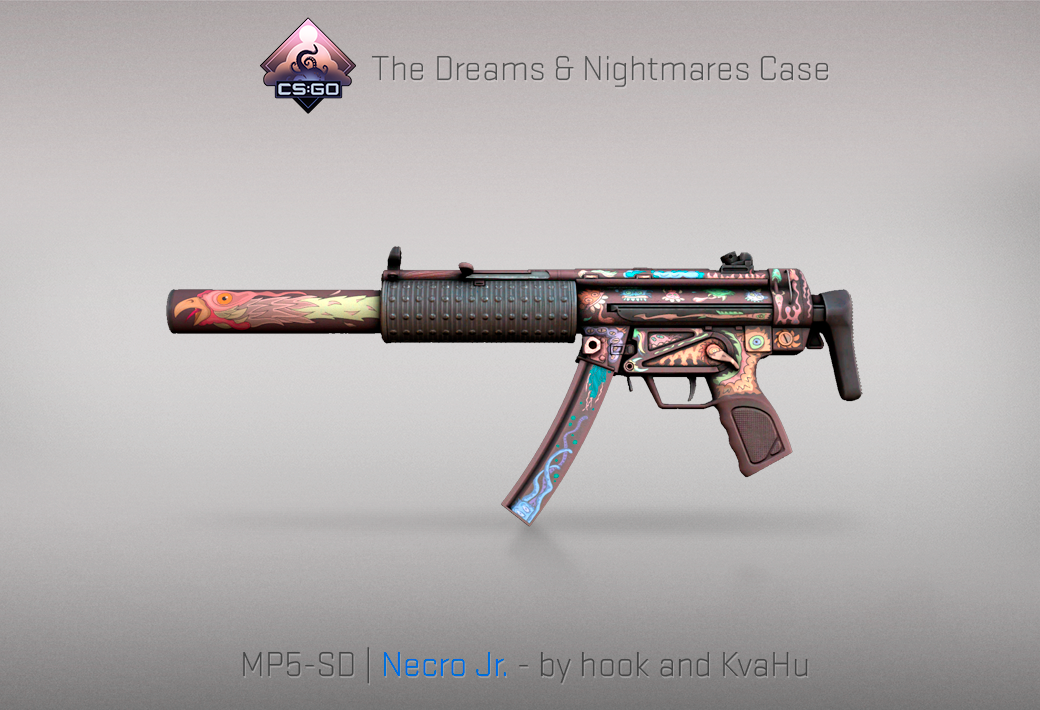 One of the most interesting skins in the new case is this Mac-10.

The general design of the skin is brilliant with the big-eyed spirits looking deeply into your soul; Like the artist behind this piece said: “ Someone caught mischievous pixies and put it in a flask. Now they will always look at you, even if the drawing is erased.

And the effect of GLOWING EYES will remind you that someone is always watching you!”.

The gem in this skin is that the eyes will glow up in dark areas around the maps making the skin look so cool and unique.

The skin was made by ‘b3d’ & ‘Catmagen’, b3d is no stranger to the CSGO workshop as he has multiple items accepted into the game such as the Romanov & Greenhead stickers. 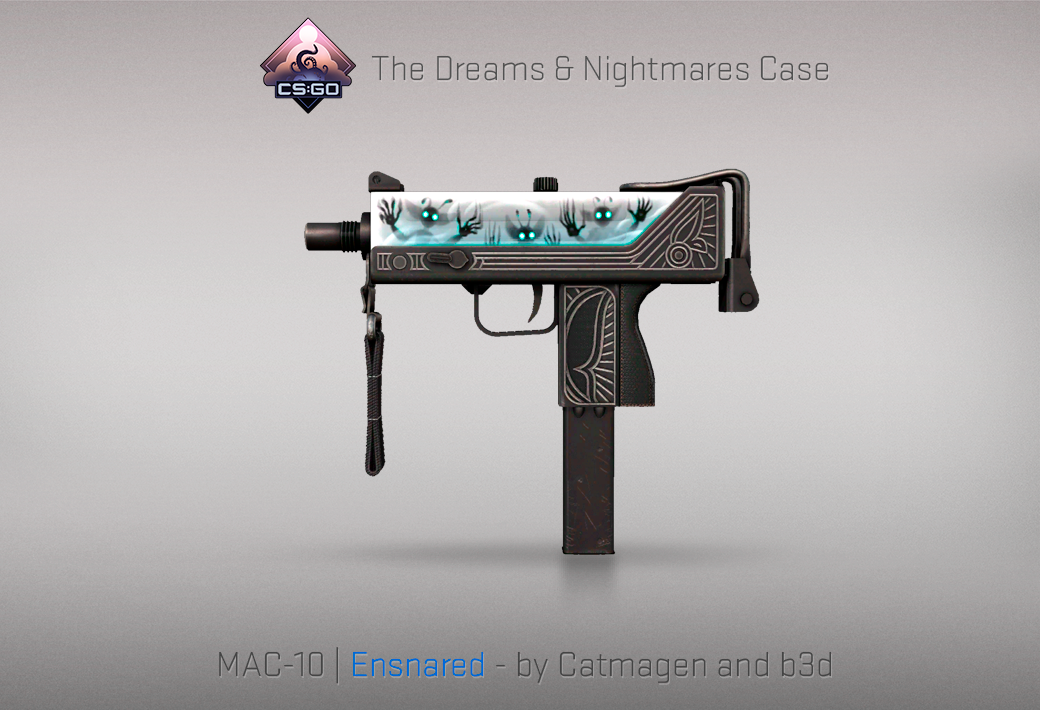 You probably have heard of a game called ‘Ouija Board’, ‘Sorarox’ has successfully turned it into a skin in a creative way.

This skin has hidden patterns. The higher the float gets, the more patterns and drawings will appear on the gun such as the star and a “RUN!! sign on top of the barrel.

If you want to get this skin, then a battle-scarred one would look amazing for only 0.46$. 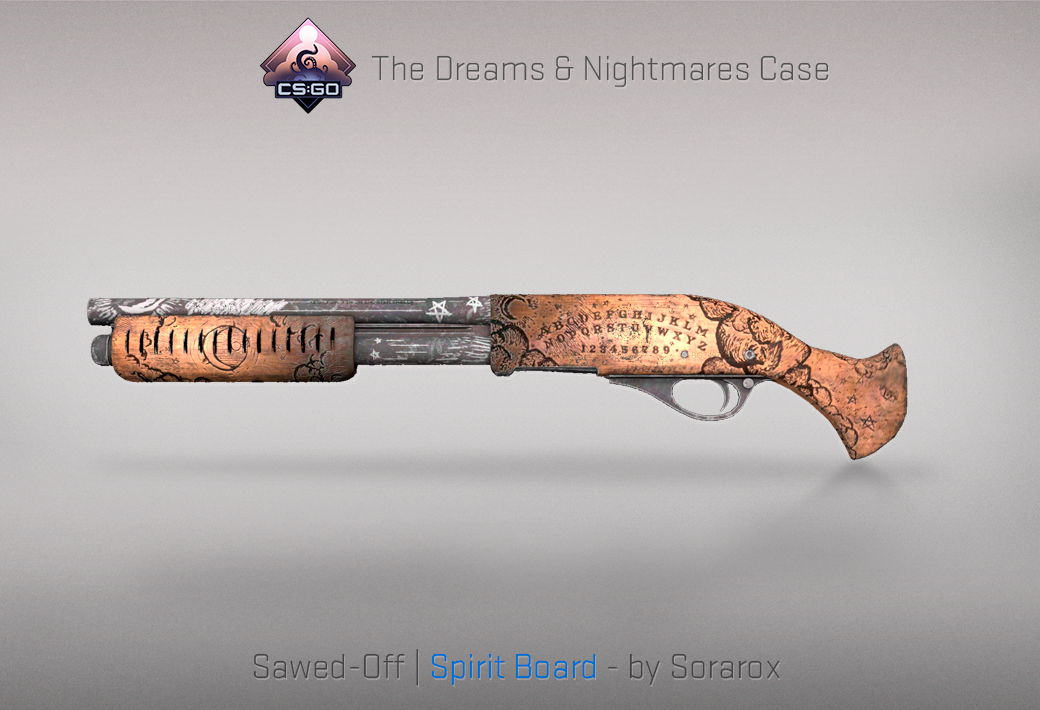 With multiple submissions being drawings of monsters, ‘Des’ the artist took a different turn into making this skin and like the name says it’s a representation of spirits being lifted in a forest. 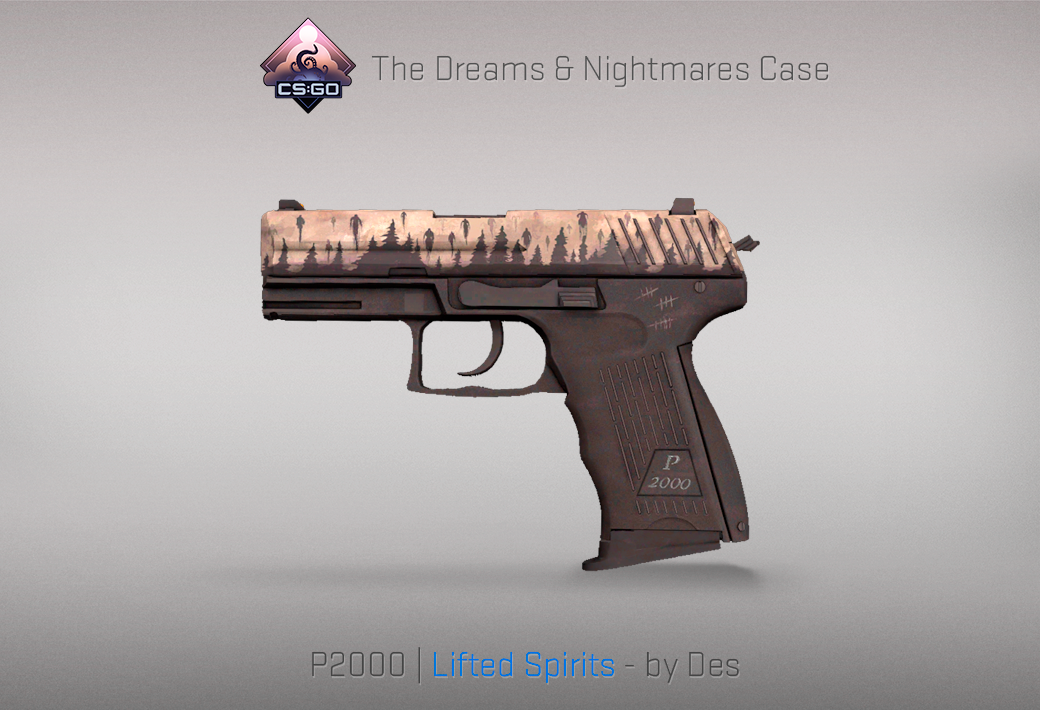 The foresight or previously submitted as the ‘predictor’ features a future telling and astrological concept, With an octopus drawn against the sun and an eye that sees everything on the handguard.

2 plates with the words “Lose” & “Win” predict your future in your next game.

This skin was made by Jerry & zlo who’s known for previous submissions such as the MP9 | Slimmy. 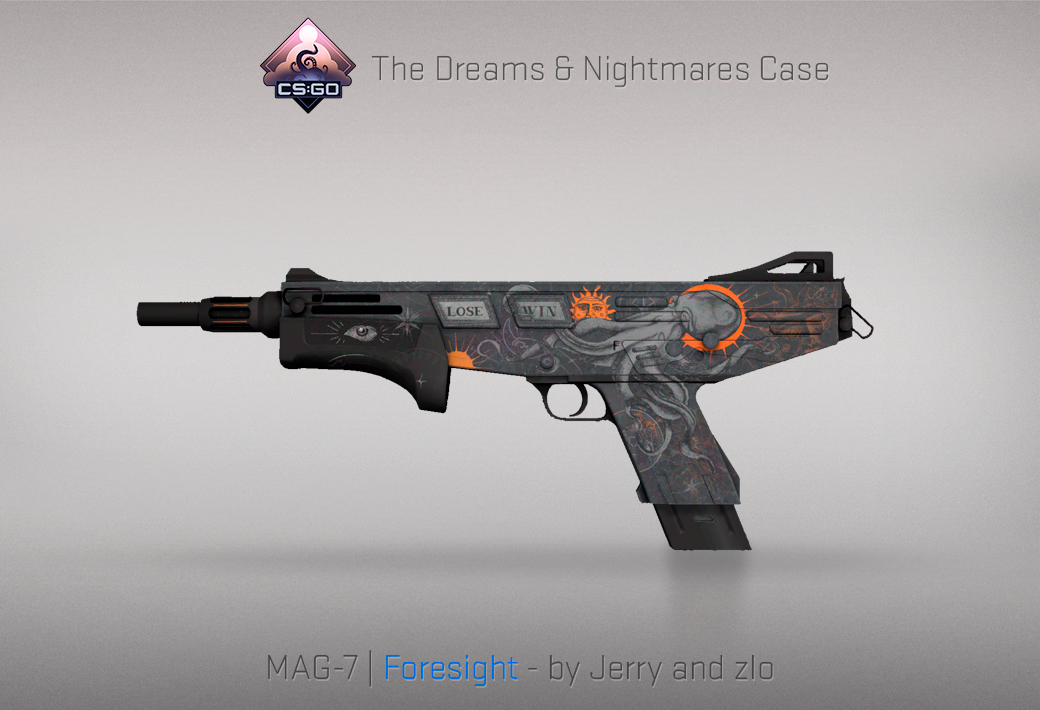 A beautiful pattern-based skin that represents chickens in different ways around a forest.

The spray paint finish allows the skin to have multiple patterns that makes the skin interesting.

Guardian Gear the artist behind this skin is well known for multiple items in the game such as SUGARFACE sticker collection, the RUSH and ROCK-PAPER-SCISSORS sticker alongside 2 skins; The TEC9- Avalanche and CZ-75 Tacticat. 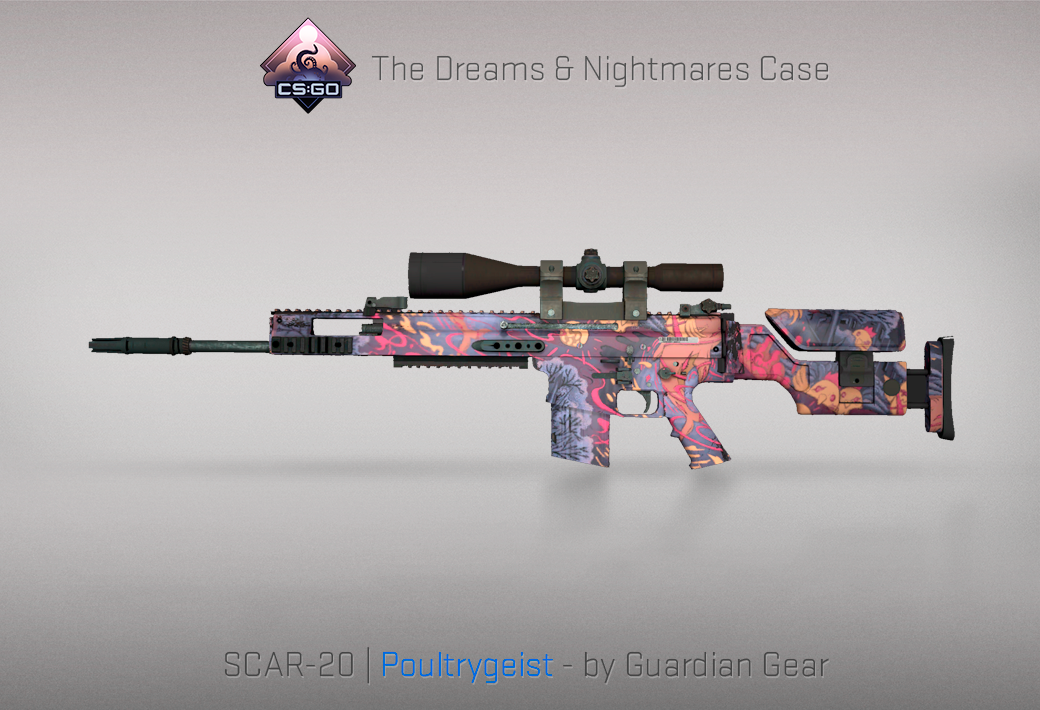 The Scrawl is definitely one of the most artistic-looking skins in the new case.

A skull, an eye, multiple faces, and a monster at the back of the gun are some of the details on this skin. The more you look at it the more interesting details you’ll find. The yellow, cyan combination with dark shadows makes it a must to have and a cool-looking skin.

This skin is the first accepted workshop skin for it’s creators Anbu & Kasim.Tattoo. 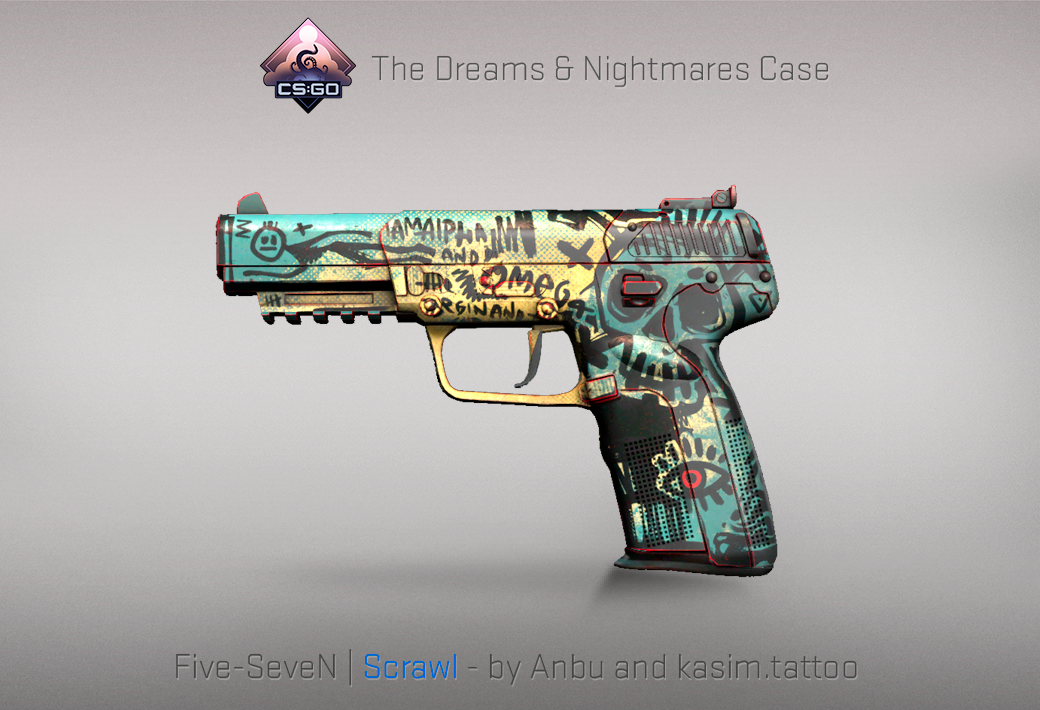 One of the community’s favorite skins in this case, The Ticket To Hell is undeniably clean and well designed.

A mouth with the teeth out appears on the right side of the skin with extra details on the handler.

‘Supermat’ in a creative way, implemented a code bar that leads to his workshop!

The artist seems to be a fan of the black and white colors as most of his submissions follow that concept. 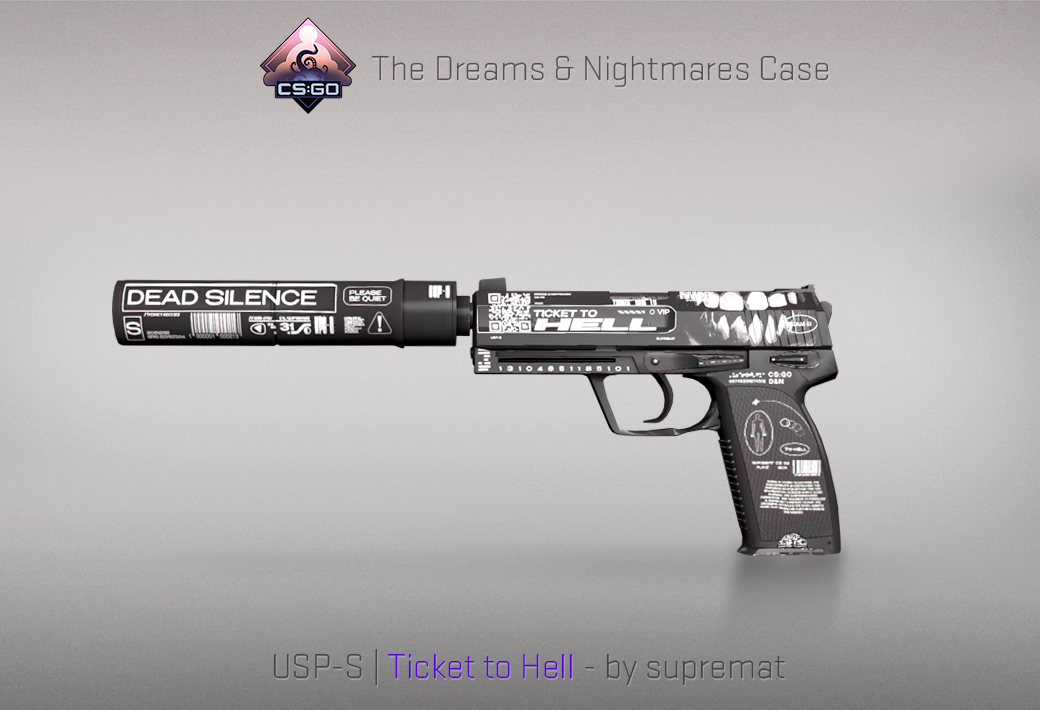 Since the M4A1-S became meta, Most of the skins prices increased. Not to forget that it’s been a while since a budget A1-S was added to the game.

The Night Terror is a beast with the bloody red and black, The skin features a haunted woman with scary eyes with words like ‘Insomnia’, ‘Pain’ and ‘Agony’ written on it.

This is another skin where the float can be a big factor on how the skin will look; The higher the float, the more it turns into purple.

One in many, This skin in a battle-scarred condition worth more than a Factory New one due to how great it looks on Battle-Scarred. 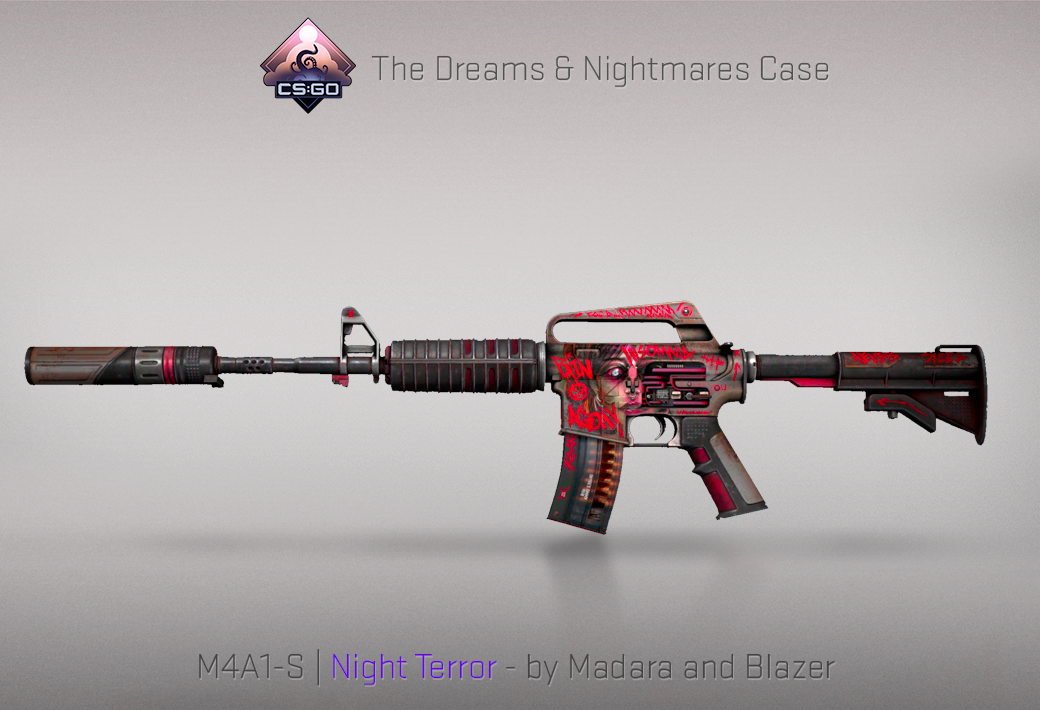 A bright centered blue sky with little creatures on the front is the first thing you see looking at this skin, The rest of the G3SG1 is covered in a green leaf pattern with eyes popping out at random spots.

This skin was made by ‘Druida’ who has another successful entry at the Dreams & Nightmares case; The Famas | Rapid Eye Movement. Making him the only artist with 2 entries in the D&N case. 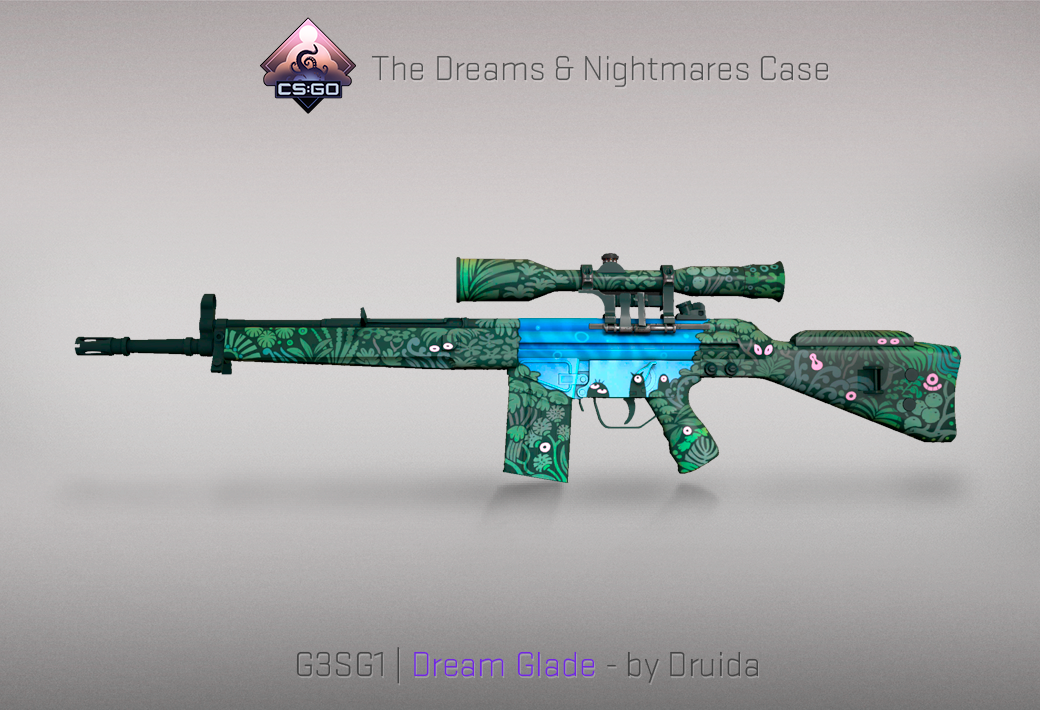 The maker of the SG 553 | Reactor ‘Maloo’ made another banger skin that deserves a spot within the new case. The skin is a combination of black, purple and white colors and a dreamy space cat.

The Space Cat is listed on the steam market for 2.47$ on a Factory New condition. 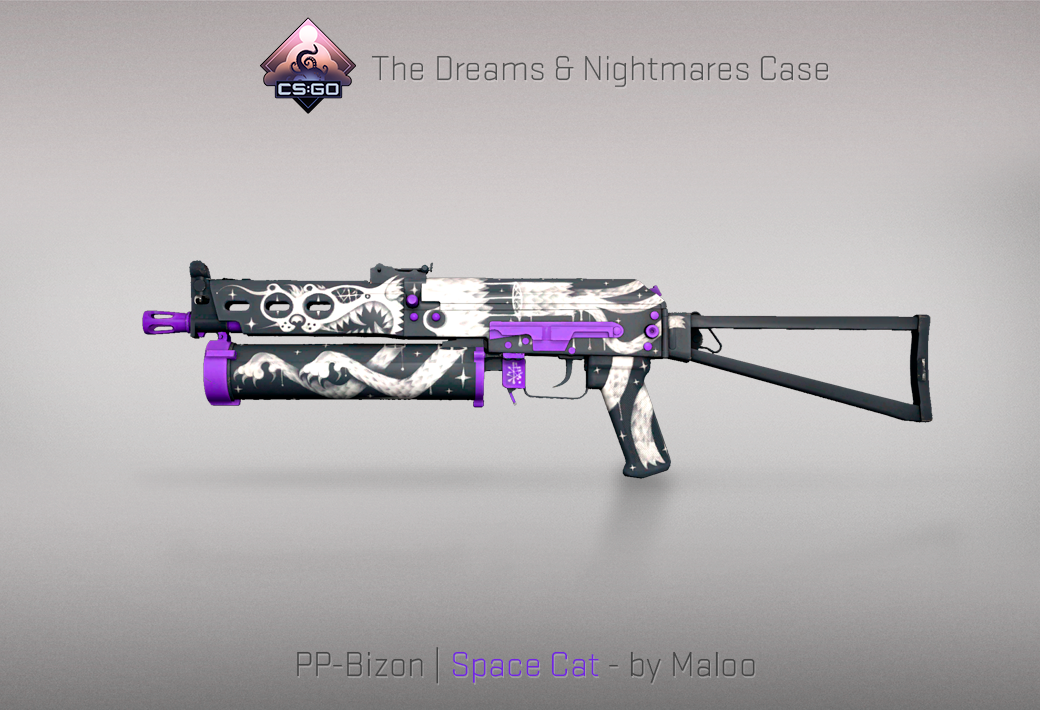 Another cartoonish looking skin, This time ‘oKeyush’ came in with an amazing concept of zombies and different agents in one big image.

The skin comes in different patterns and colors, However it doesn’t have any special nor rare pattern.

It’s worth it to mention that the highest float for this skin is 0.50 making it available in all conditions. 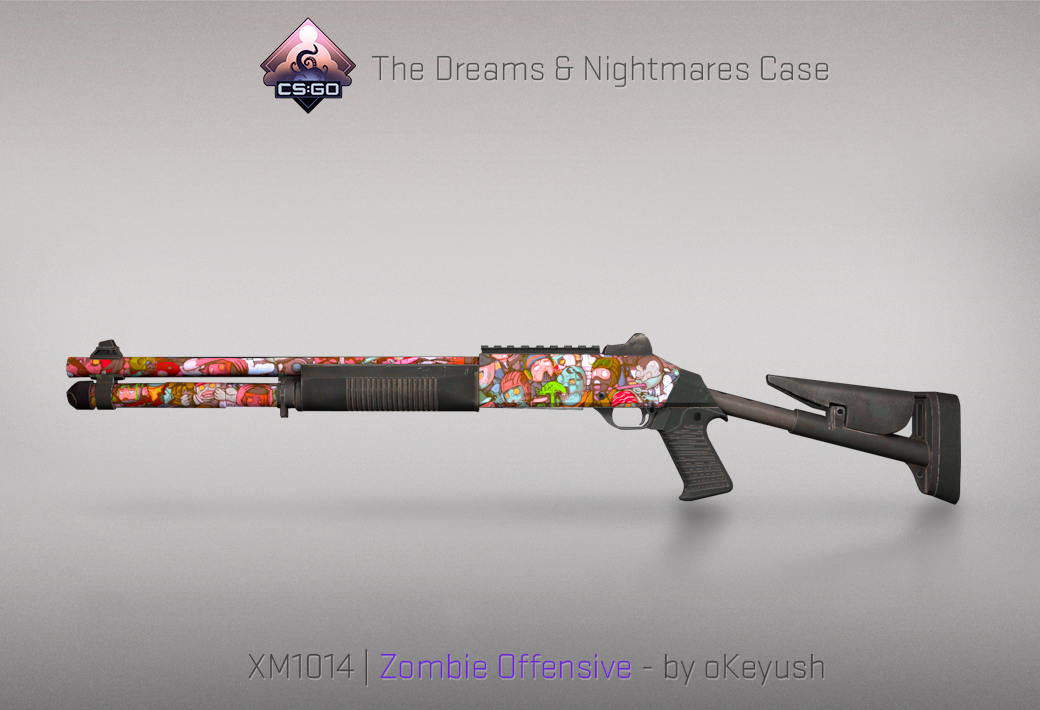 The eyes that can see everything, A skin that was inspired by the REM sleep; a kind of sleep that occurs at intervals during the night and is characterized by rapid eye movements, more dreaming and bodily movement, and faster pulse and breathing.

This skin is a beauty! The bright pink/purple colors and the scary eyes that are looking in every direction and watching everything adding it to the well detailed magazine.. This skin has it all.

It’s safe to say that this Famas is an absolute beauty and Sparkwire alongside Druida did a fantastic job. 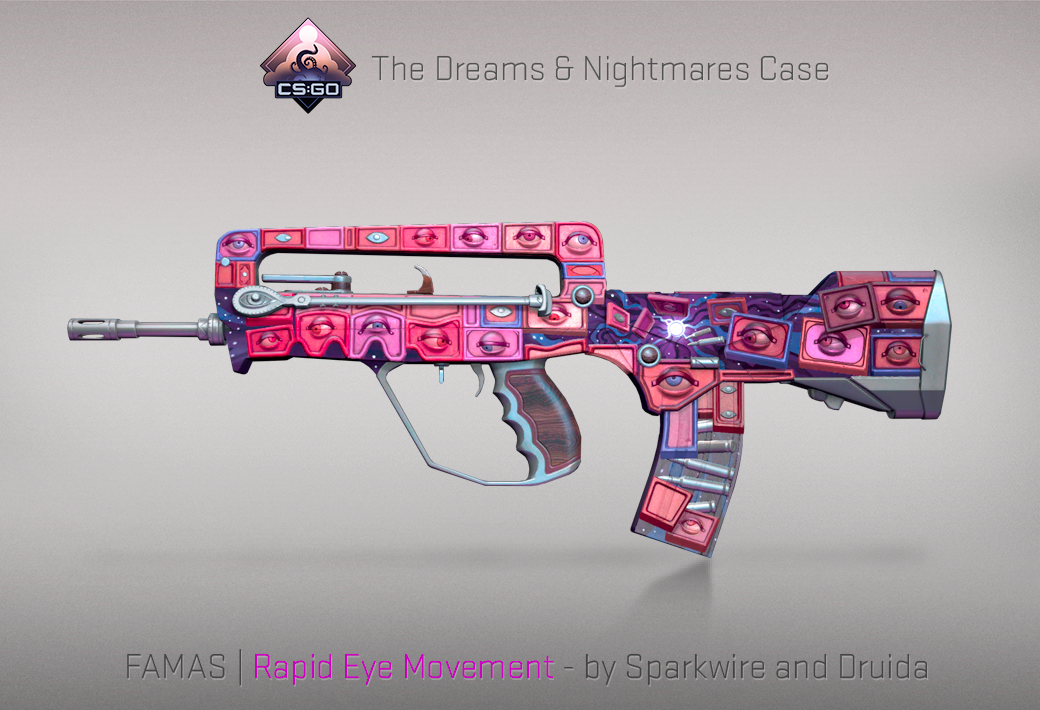 We saw different skins with cool hidden patterns and float differences. In this case, Melondrama is yet another skin with a cool float feature.

With the design having many eyes all over the gun, The battle-scarred condition makes the eyes fade and vanish making the skin look cool.

Both of the creating artists ‘kush’ & ‘sebasteter’ have only few workshop submissions but this one reigned supreme over 15,000 other designs. 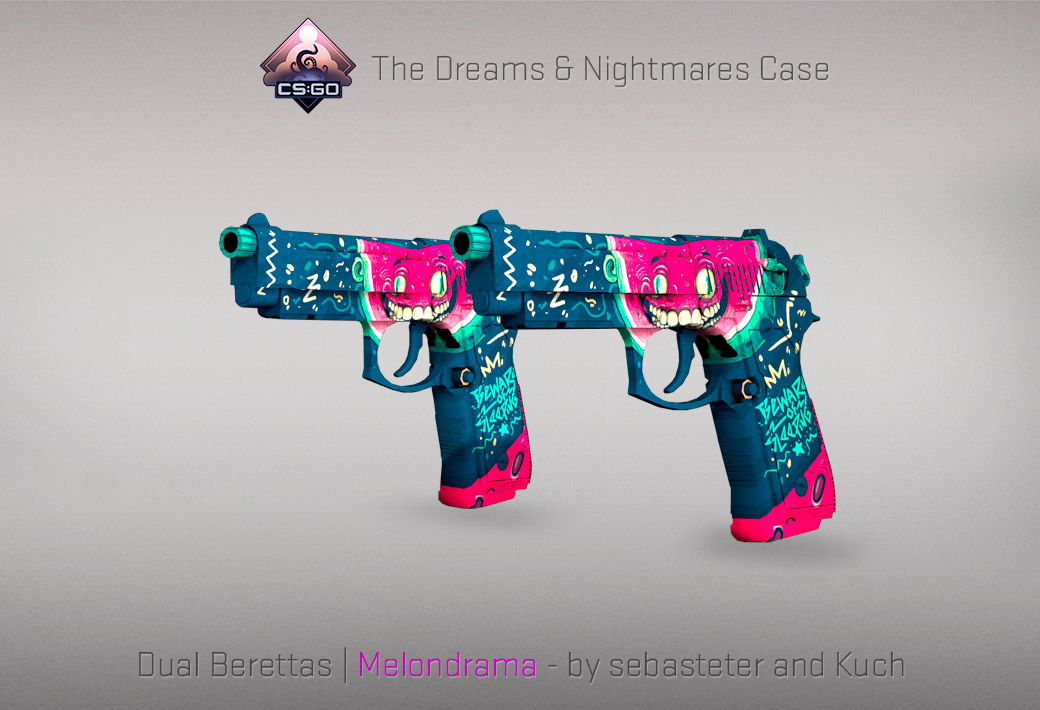 This MP7 sparks fear in enemies with a drawing of monster tentacles, The glitch effect fits perfectly into the color scheme of the skin.

according to the creator, The MP7 depicts abandoned souls falling into a pit of nightmares. 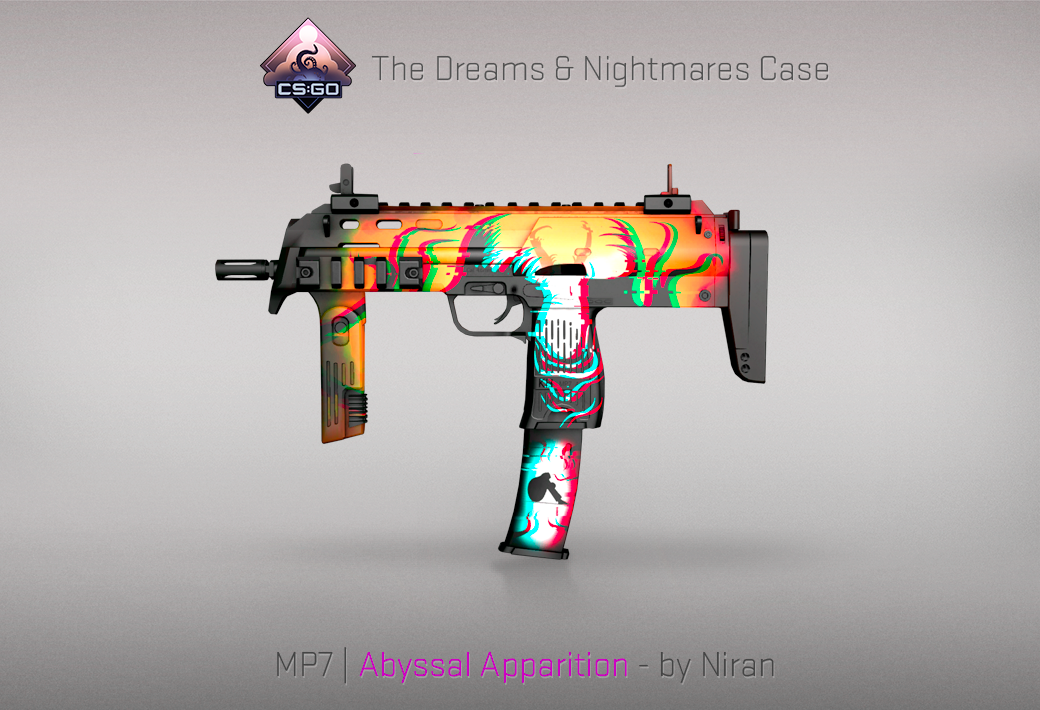 Another fan favorite skin and one of the best MP9 skins, The Starlight Protector represents a beautiful unicorn with golden stars around the gun.

This skin is inspired by art deco. The artist is one of the most successful artists with a lot of sticker collections already made it to the game such as the Skill Groups Stickers and some old stickers like Doomed, Phoenix, Queen of pain, Dragon Lore, and much more.

TheDanidem is also the creator of AWP | PAW. 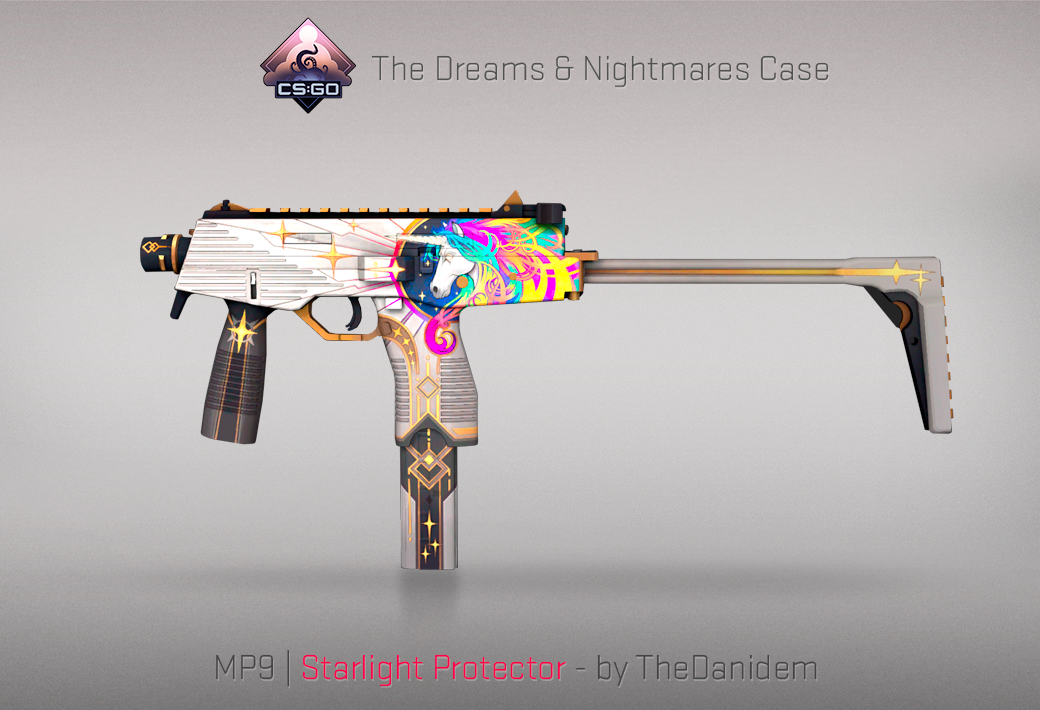 This scary AK-47 comes with a story behind it. The creator Nextgenz explained and dissected the process of making this skin, The monster on this skin represents a deer that symbolizes the guide of sunlight.

“To dream of a dead deer is auspicious because it is the representation of the disappearance of a haughty enemy. Seeing a deer in a dream announces an advantage that should be taken advantage of immediately. To dream of hunting a deer, is an invitation not to make mistakes in life in reality.” - Nextgenz. 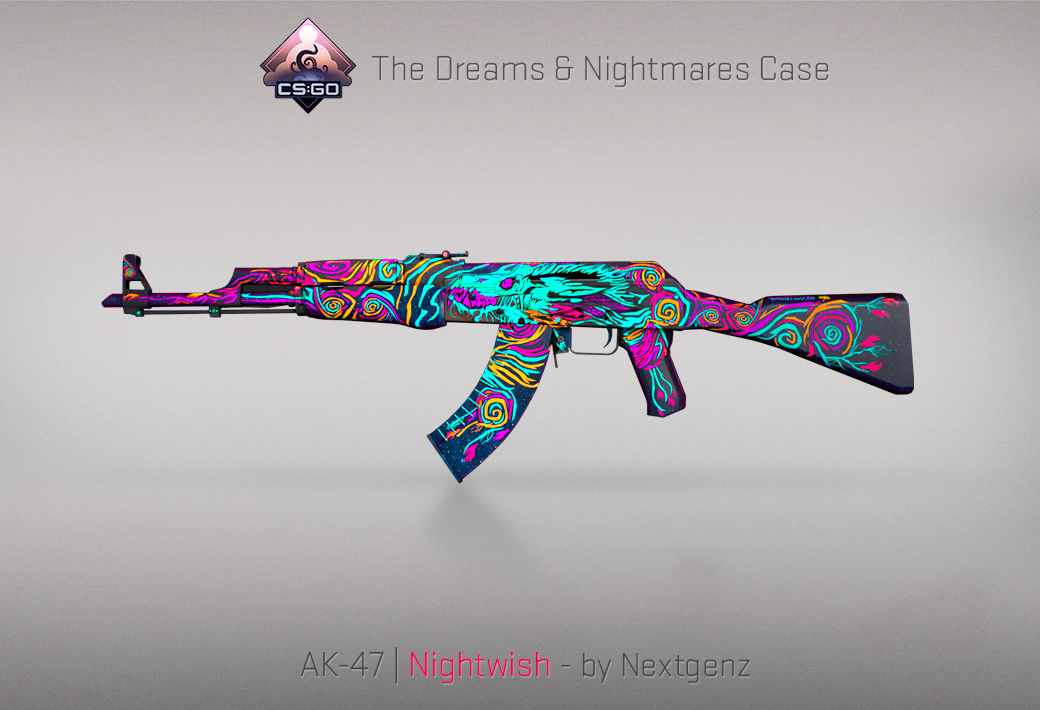 The rare special item for the case are special knives with Gamma Finishes for the following knives: 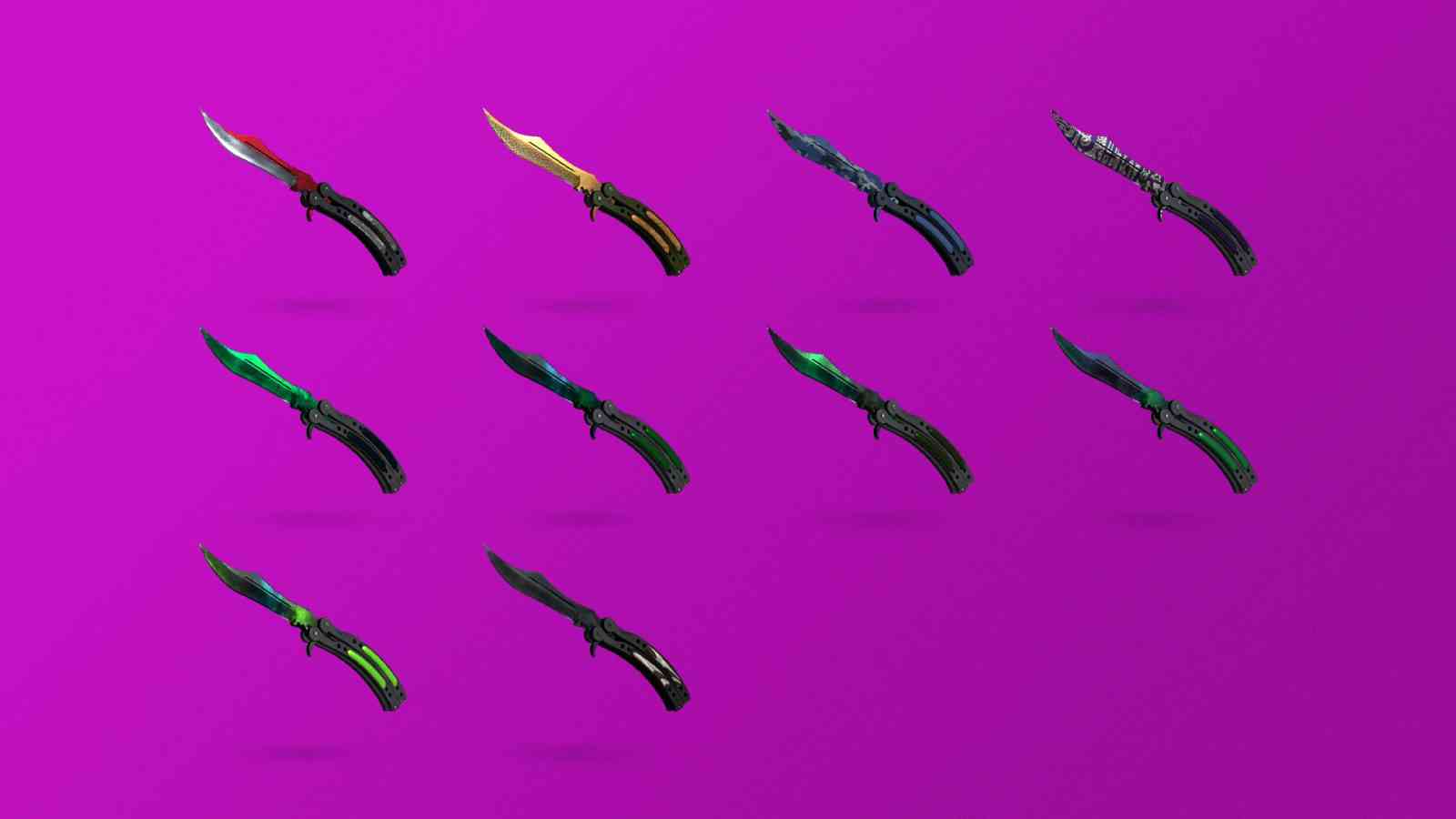 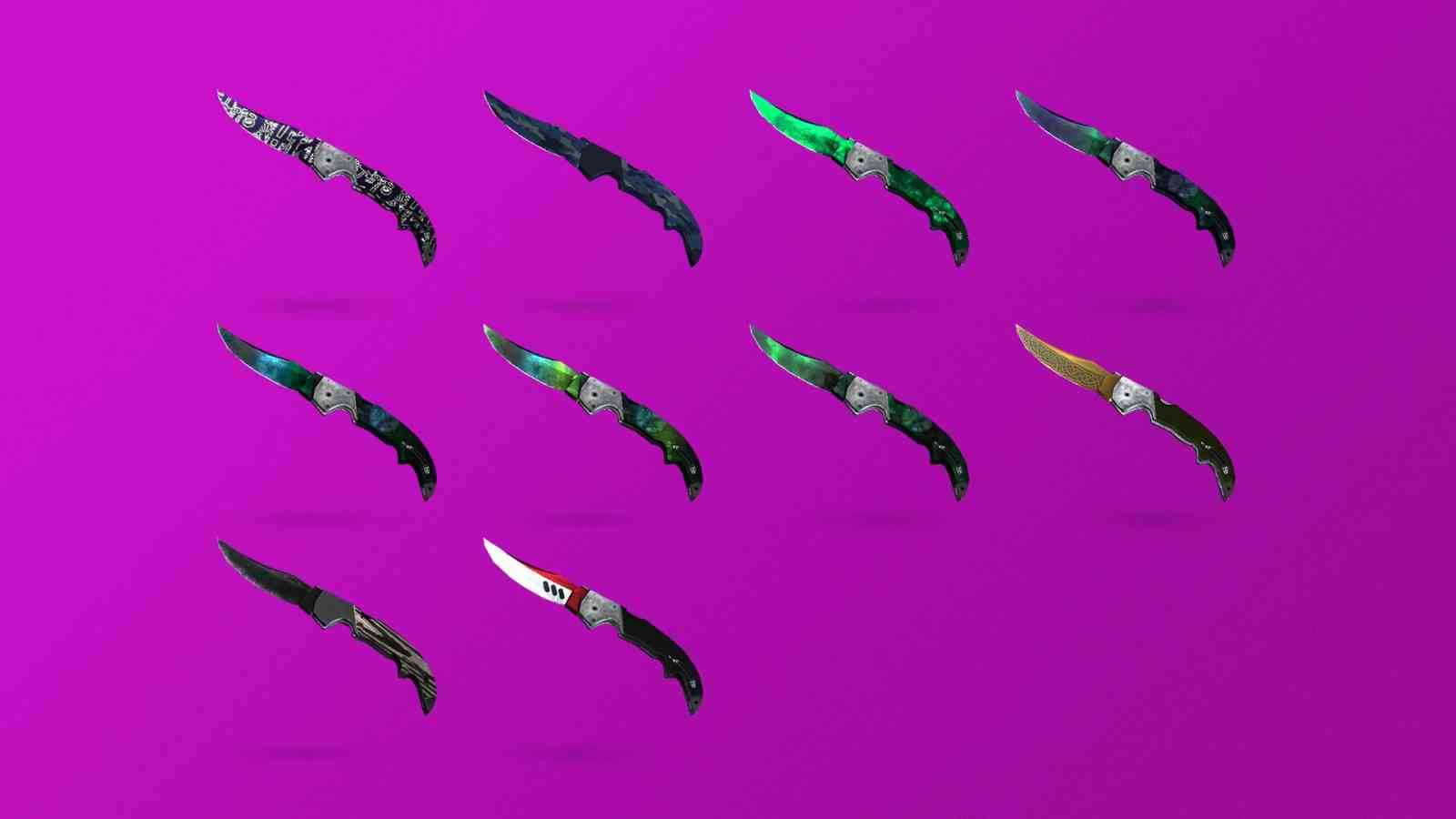 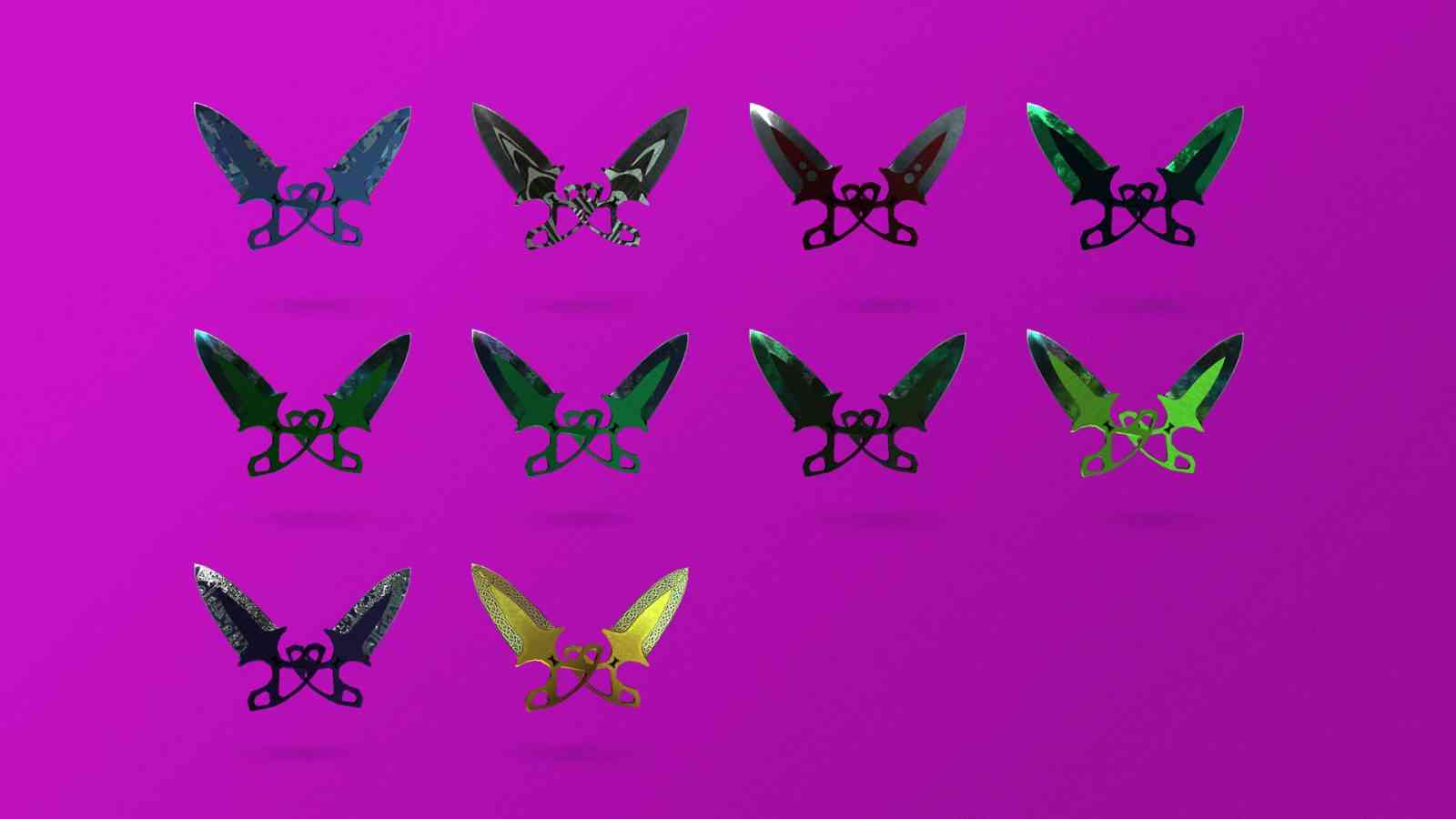 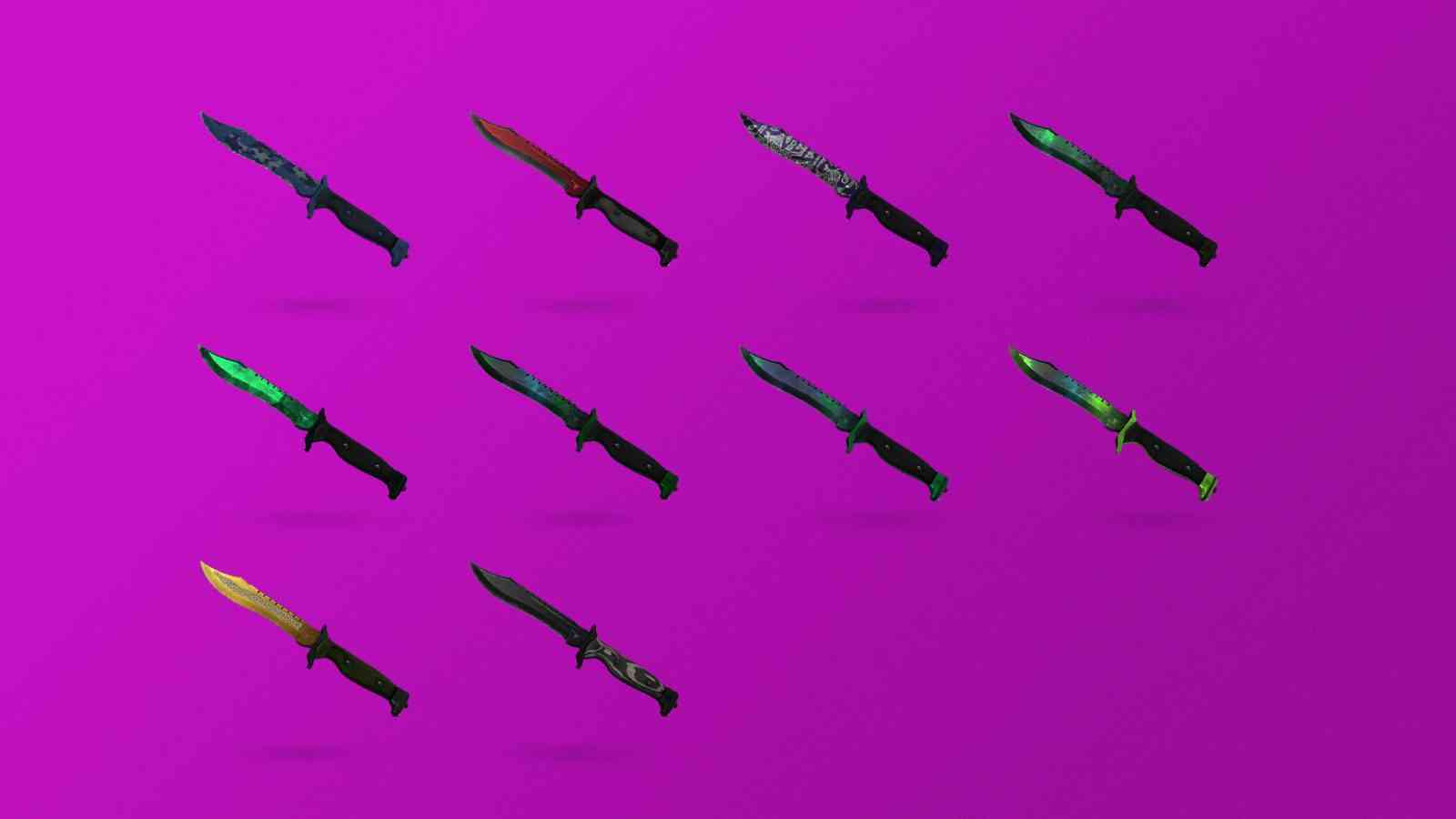