EG Apotheon: “Since us joining the team, Potter has gotten all the pieces to the puzzle that she needs.”

Following a quintuple overtime struggle that served as a fitting cap to a riveting and equally grueling series, FaZe Clan came out on top over Evil Geniuses in the 2022 North American Last Chance Qualifier. As a result, EG was thrown into the lower bracket of the LCQ playoff format. That meant should the Evil Crew lose another series, they would be eliminated from qualifying for Champions. The stakes can’t get any higher than what EG and the rest of the field have already dealt with.

Following the series against FaZe, BLIX.GG spoke to EG’s Vincent "Apotheon" Le to discuss how the team maintained their concentration amidst lengthy overtime, the idea behind the team selecting Neon and Phoenix, and how his focus on Valorant has evolved since joining the team.

BLIX: Commiserations on the series loss against FaZe Clan. I can honestly say that it was a grueling series with both teams fighting to the absolute map. Especially in the final map, as overtime continued to get extended, it became a herculean effort for both teams to maintain their nerves and outlast each other. What is your initial reaction after playing FaZe in the first round of the LCQ?

Vincent "Apotheon" Le: Well, they're a strong team but we came in today expecting to win, so it sucks that we lost. When the rounds are broken down, sometimes it just comes down to--I wouldn't say it's random, but you can only control the variables so much in every single round, and when the rounds break down, it just becomes a slug fight, and sometimes the one team just ended up coming out on top. For today, they just made the right micro plays when the rounds were slugging out, and they came out with the dub. All three maps were really close, so that's my reaction.

BLIX: And there certainly was a clear emphasis on the series becoming a slugfest, especially in the final map. What made it so difficult for either team to win overtime in Map 3 and finally take a round on defense?

Apotheon: I'd say the reason why it's so hard to close it out in overtime is that, at that point, both teams already showed their entire playbook. Everything has been left on the table to try to end the game in regulation. Teams aren't really keeping things for overtime, right? And in this specific game, both coaches used their tactical pauses early so that they couldn't give any input on the game. So after the first overtime, both the coaches just had to watch both teams just fight it out that with no ability to interject.

Apotheon: With both playbooks already left out on the book, in a way, it becomes a slot roulette because you know everything that they could possibly do, and you've already shown everything you could possibly do. You're just trying to make sure you don't lose to anything, and both teams are not trying to lose to anything, so everyone was playing super safe, so to speak. I guess that's why it was hard to close out the game in overtime.

BLIX: Unfortunately, a team had to come out of the series as a loser and that bitter honor fell to you guys. Nevertheless, I want to go back to how EG prepared for FaZe. For reference, this team made a few notable agent picks such as Jawgemo (Alexander Mor) playing on Neon in Breeze and Boostio (Kelden Pupello) playing as Phoenix. This agent has been absent from the VCT for the season. What aspects did the team specifically focus on when taking on FaZe ahead of this series?

BLIX: And how has the team grown from being known as a counter-strat team?

Apotheon: We're playing our characters that other teams aren't playing so no matter what we have to do, we really have to throw our own spin on the game. I would say we're not we're not picking Neon only against Faze and we're not picking Phoenix only against FaZe. We have our own playbook and we played to our own strengths instead of to their weaknesses. I feel like it's all a misconception. We are well prepared but we're not a heavy anti-strat team.

Moving on from Challengers 2 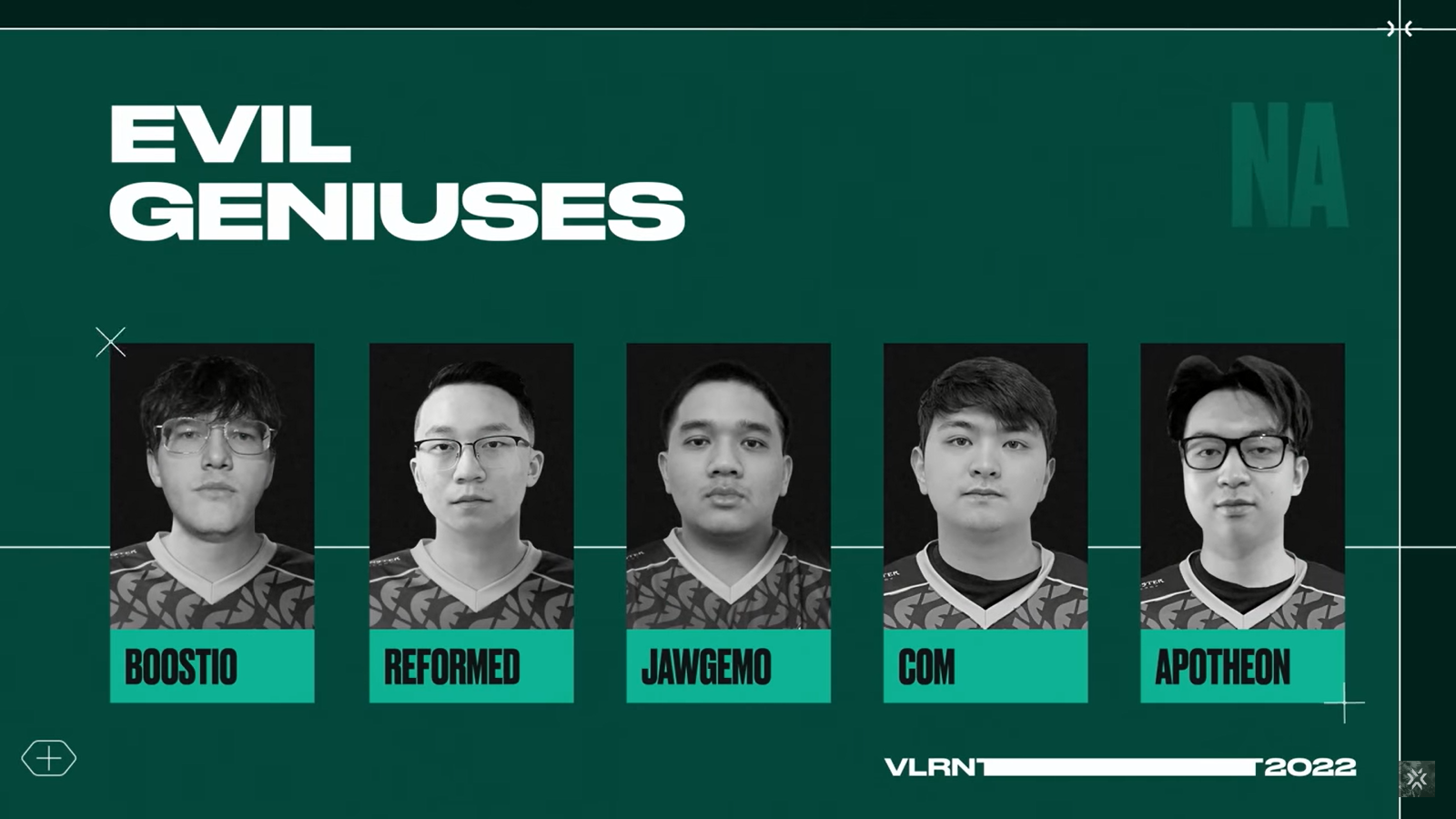 The Roster for Evil Geniuses during Challengers 2

BLIX: Despite doing well in Challengers 2 by qualifying for playoffs with a 3-2 group stage record, EG faltered as they finished in 5-6th place. How have you been able to improve from that disappointment in Stage 2 for this tournament?

Apotheon: If you want to be one of the bests, you have to play more, and we also innovated. Our formula has been just playing the game more. Everybody has been grinding. We've been innovating. We've been taking scrims seriously and trying to improve. Since we didn't go as far as we wanted to, the only way to do that is to get better. And how do you get better? You just work harder. It's a simple answer, but that's all.

BLIX: Still sticking with how the team performed in Stage 2, it's fair to say that every EG player felt devastated after not qualifying for Masters: Copenhagen in the Challengers 2 playoffs, but I feel the one who was more disappointed than anyone else following that NRG series loss was you. After the series, you mentioned how you "played [your] f*****g worst when it mattered most." Since joining the team roughly four months ago as a young talent, have you found that your concentration on the game has increased exponentially?

Apotheon: Oh 1,000,000%. When I joined the team, I was a decent player, which I guess explains why they picked me up, but I think Potter mainly picked me up because of my capacity to learn, so I definitely improved in the fine details of the game since joining.

BLIX: Do you think had you not joined a team that is similar to EG you wouldn't have been able to reach the state that you're in right now mentally speaking?

Apotheon: I believe that I would have reached this point eventually, but being able to join EG and being under Potter's swing definitely fast-tracked my career a lot.

BLIX: When it comes to joining a team, each player is bound to experience their own share of struggles in trying to fit in with a team. Have you been able to finally adapt to the point where you could play cohesively with the rest of the team since joining the lineup?

Apotheon: I think I was able to play cohesively with the rest of the team since the beginning. I feel like my biggest strength, to be honest, is flexibility. I think I can adapt to almost any playstyle that any controller would be expected to adapt to. I wouldn't say I'm trying to reach a point where we're finally playing cohesively. I think we've been playing cohesively the entire time. I can only focus on my individual improvement, so we are cohesive as a team, but I'm trying to improve individually, as well.

BLIX: As you've been able to gel with the rest of the team basically from the jump, that has led people to provide the notion that you've essentially rejuvenated the team alongside C0M (Corbin Lee), who joined alongside you back in April. What do you make of the notion from fans that are labeling you as a catalyst for the revitalization of the team, given that the team has improved drastically compared to how they fared earlier in the year?

Apotheon: The people think that I'm the revitalizer of EG. I mean, it's an honor, but I think the truth is that everybody on the team has something to prove and Potter is a great coach. Since us joining the team, Potter has gotten all the pieces to the puzzle that she needs. We're five hardworking individuals who want to improve, so that's the main reason why EG is performing well even though it's my honor to have people consider me as the reason why we're doing well.