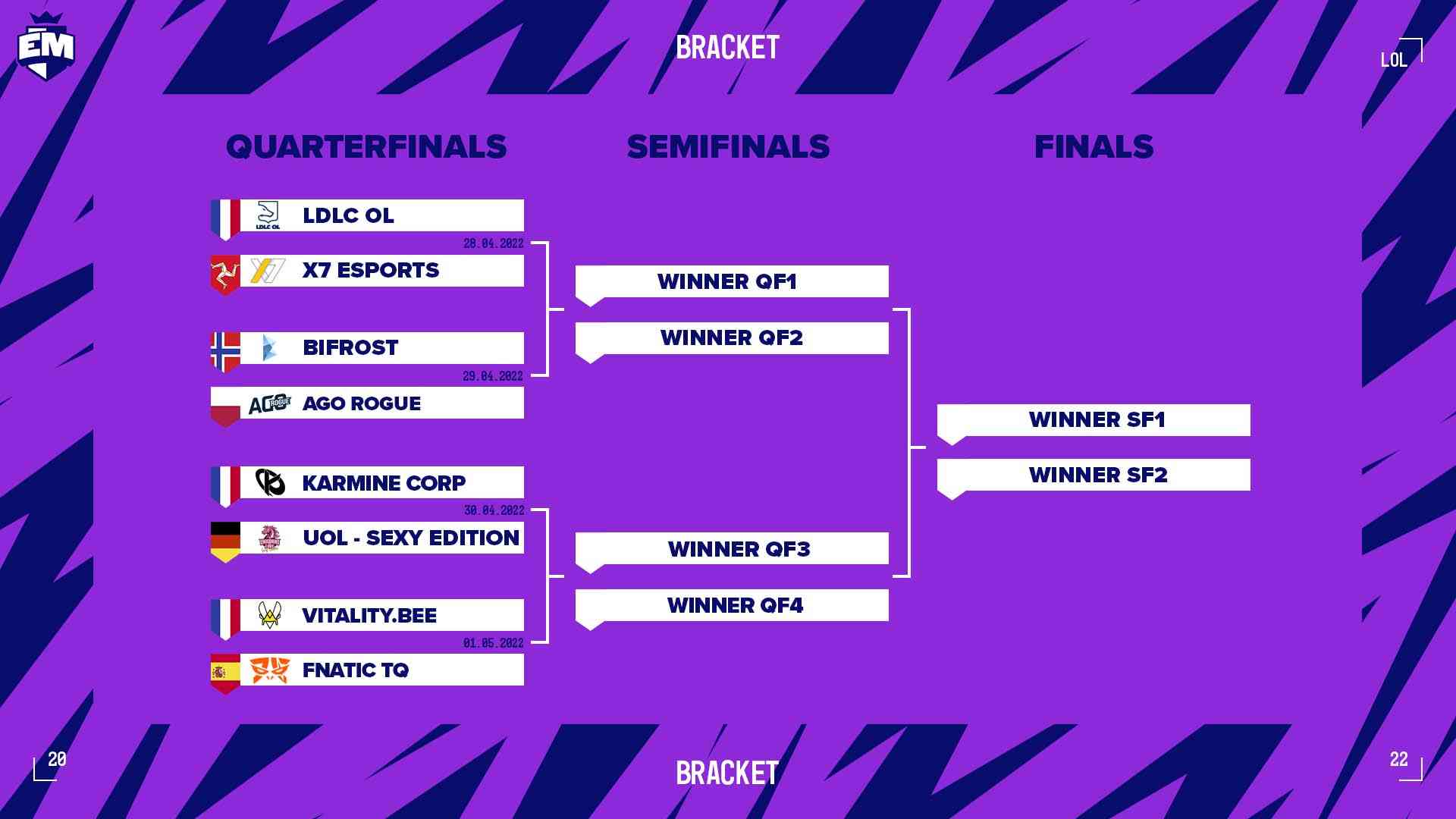 After a grueling group stage, the top eight teams of the European Masters 2022 spring have finally been decided.

The French LFL have predictably been dominant with three out four teams making it out as first seed, while both the NLC seeds have surprised many. AGO ROGUE from the Ultraliga, Fnatic TQ from the LVP SuperLiga and the Unicorns of Love Sexy Edtion from the Prime League round up the playoffs teams.

BLIX.GG’s writers sat down and invited some guests from the ERLs to talk about their thoughts on the Knockout matches ahead and which ones they’re keeping an eye out for. The three guests are:-

Which side of the bracket do you think is most competitive?

LEC Gliscor: It's very hard to tell. Lower bracket has more LFL teams, but both of the NLC teams, as well as the LFL champion and only French team to go 6-0 are on the Upper bracket. So, as a whole, I think the Upper bracket has a bigger level, mainly because their second seeding teams X7 Esports and AGO Rogue were more challenging than Fnatic TQ and UOL Sexy Edition.

Megalodontus: Top 110%. If there are NLC teams, the level rises tremendously! No bias.

On a serious note, I do think generally, the bottom half looks more competitive. My reason being is due to recent form and potential ceilings of some teams. Karmine Corp woke up and dominated round 2 in their group, Unicorns of Love Sexy Edition and Vitality.Bee are very consistent, and Fnatic TQ well, we’re still waiting on them to unleash the beast within. So in my opinion it’s the lower half but only slightly.

Random: I think both sides are very even. But, the most competitive matches could be between LDLC vs X7 Esports, and UOL Sexy Edition vs Karmine Corp.

Tasteless: I feel like the bottom side of the bracket is a bit more competitive. Vitality.Bee looked really scary (I experienced it first hand) and Karmine Corp was kinda getting back in form and looking better and better by each game. I think top bracket has a clear winner in LDLC OL.

Torok: For me, the most competitive side of the bracket is the bottom half - mainly because I believe both quarter-finals can be competitive. UOL has a relatively good matchup into KC and Vitality.Bee vs FNTQ are two favourites going head to head. LDLC vs X7 is the heavyweight quarter-final match up though and the winner should make a run for the finals.

Which Knockout match are you most hype for?

LEC Gliscor: The easy answer would be LDLC OL against X7, but that is kind of boring. Instead, the UOL Sexy Edition versus Karmine Corp is more interesting, as both teams have a lot to prove. UOL Sexy Edition has been so far the only successful Prime League team, so they will be representing a whole region, while KCorp is the ultimate team, biggest fanbase and most renowned players, who need to defend their title.

Megalodontus: Sorry Gliscor, I am boring so it has to be LDLC against X7. I mean, how could you not be hyped for this match? Stylistically, they’ve shown they’re very different teams and if they play to their ceiling, are potentially the best at executing them in the tournament. LDLC’s consistency against X7’s ruthless aggression, I can’t wait to see this match.

Random: I’m really excited about LDLC against X7, although it is kind of unlucky that these 2 teams meet so early in the tournament. I think the winner will be LDLC with a result of 3-2.

Tasteless: I think the VITB/FNTQ game is gonna be the most competitive in the Quarterfinals, so I'm really looking hard at that game.

Torok: Diverting away from popular consensus, I’m most hyped for the Bifrost versus Ago Rogue matchup! I never expected Bifrost to be in this position, but coming into the knockouts first in groups, means they have a relatively good matchup for the squad. I’m curious if their current EUM form will hold and push them to a surprise semi-final appearance.

Who is the best performing player so far or most underrated in the tournament?

LEC Gliscor: Best performing player so far I would say it is Haru, he has outperformed most of their rivals easily, showing why he has been a World-class player. And, the most underrated player, I would say either Harpoon or DuaLL. Both have stepped up when the team needed it most, and were pretty unknown by the spectators.

Megalodontus: This one’s a hard one. There are many players who have had big moments in in groups, Saken, Rekkles, Lucker, Haru, Szygenda etc. I’m not sure who to give it to but…the one player that really caught my eye was LDLC’s top laner Ragner. He had a very strong season in the LFL and it looks like he’s not slowed down at all in EU Masters.

Underrated for me is Furuy from Bifrost. The man in the mid might not win every lane but he has been incredibly consistent and clutch, which greatly helped Bifrost to securing first seed.

Tasteless: The best performing player is probably Exakick (I think the whole LDLC is giga strong), and most underrated, I would say Bifrost as a whole. These guys play very well as a team, and they really surprised me with their performance.

Torok: Odi11 for Bifrost is being criminally overlooked and is setting the bar for what it means to be a top EU adc. His name is not close in stature to the likes of Rekkles or Bean, but he is performing like them as soon as you take nameplates off.

If you had to predict the finals now, which two teams would be in it and what do you think the score will be?

LEC Gliscor: I have been mocked and cancelled a lot for saying that GamerLegion would be in the finals, so I already know my prediction is going to be doomed. But, I stand by my choice of Fnatic TQ as tournament winners, but this time against X7 Esports, with an exciting result of 3-2.

Megalodontus: I’m going with Gliscor here and inhaling the full NLC hopium tank: X7 vs FNC TQ in the finals, let’s go! However, I think X7 will deny Fnatic once more and win 3-1.

Random: I think it will be Fnatic TQ against LDLC OL.

Tasteless: LDLC OL against Vitality.Bee, with a 3-1 for LDLC.

Torok: X7 Esports vs Vitality.Bee is the finals matchup I believe we’ll see, though LDLC will be a trial by fire for X7 in Bo5’s. I believe X7 will take the final 3-1.