When FaZe Clan first entered the Counter-Strike esports scene, they wanted to dominate and become one of the best teams in the world.

A big organization acquiring the G2 lineup only meant that history would be made, or at least, so everyone thought. The first year of the roster wasn’t a walk in the park, and FaZe Clan couldn’t find their footing inside the server. 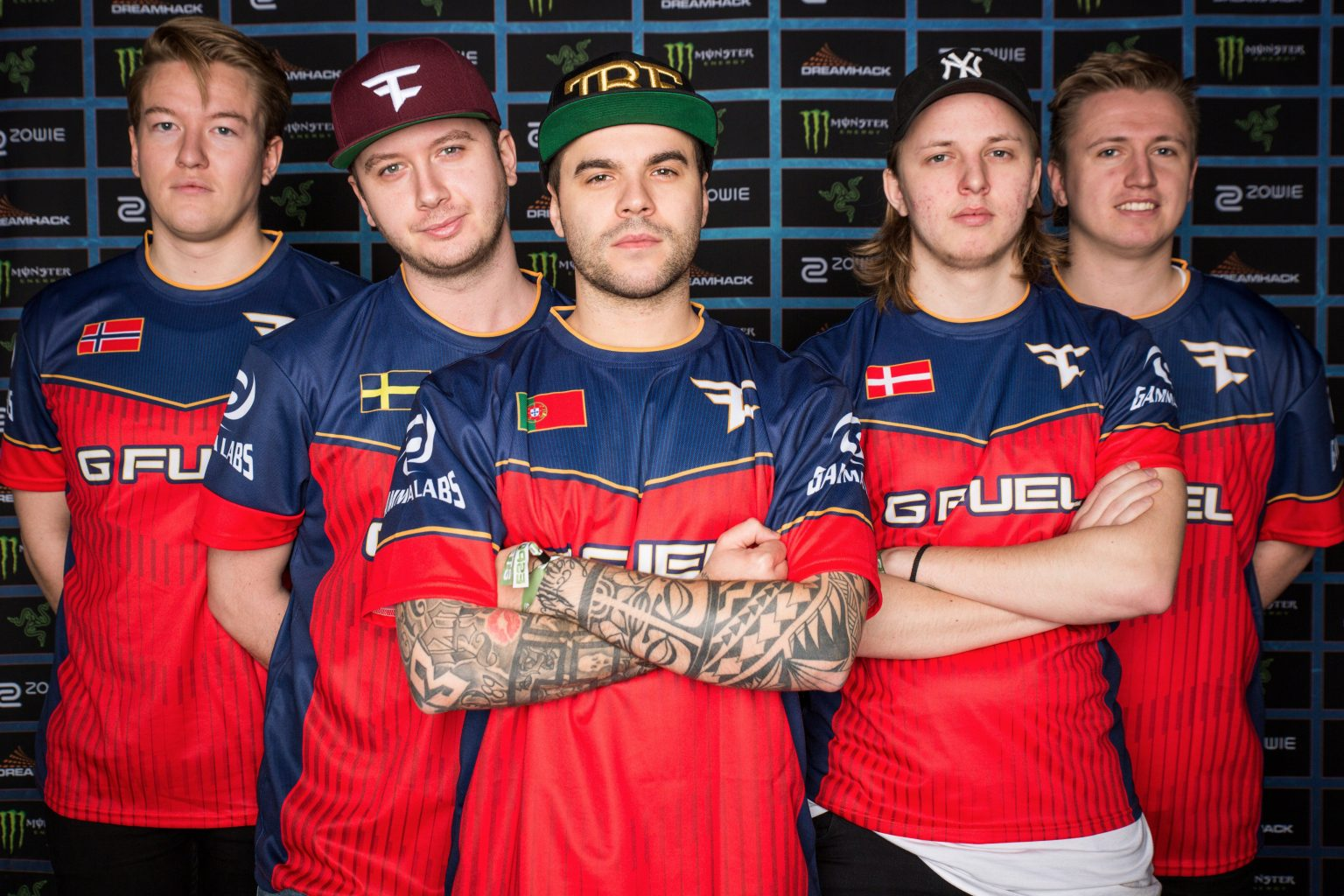 A year after the most expensive team acquisition went down, The team went through multiple roster changes keeping only Håvard “rain” Nygaard all the way long since the beginning.

2017 was a successful year for them. They lifted four trophies; SL i-League StarSeries Season 3, ESL One New York, ELEAGUE CSGO Premier, and ECS Season 4 Finals, with a solid line-up of Karrigan, NiKo, olofmeister, GuardiaN, and rain.

FaZe Clan has finally cemented themselves as a superstar team that can win and become the best in the world. However, The real test is yet to come at the ELEAGUE Major in 2018.

FaZe Clan entered the Major as one of the favorites to lift the trophy, and they were on the right track to do exactly that until Inferno 15-11 happened.

A curse that would follow them for many years later, Karrigan and his teammates were one round away from taking the win, only to lose control of the game and let their only chance to become Major champions go in vain.

Months after the devastating loss at the Major, ‘olofmeister’ took a personal leave of absence from the starting lineup and signed ‘Xizt’ as a stand-in from Ninjas in Pyjamas.

It took him two months to finally get back to the active roster, only to drop and extend his personal leave of absence as he revealed that he wasn’t fully ready to play again and would take a much longer break.

"I thought I was ready to come back, but I was not,"

"I really wanted to make it work but stressed my comeback in doing so. It is all my own fault and I should have listened to myself.” - olofmeister

‘olofmeister’ managed to get back on the server for the ELEAGUE CS:GO Premier 2018 after months after his second break.

After FaZe were eliminated from ESL One Cologne 2018 from the early stages by losing to G2 & NRG, ‘NiKo’ commented in an interview with HLTV about the team’s state, describing the losses as “one of the worst losses at an event and one of the biggest disappointments they’ve ever had” and followed by stating that ‘Karrigan’ will no longer be the In-game Leader.

As for Karrigan, it was obvious that he was not feeling any good about his mental health, and it all started during the FACEIT Major 2018.

FaZe lost the first two games of the group stage with “Finn” as the in-game leader, who tore his confidence apart, as he expressed in an interview with TV2.

“Right now I want to say that I'm under pressure. What was going on in London was something that took on my confidence. As captain of the team, I must never lose my confidence.” - Karrigan

As a result of the lost matches, the star, Nikola ‘NiKo’ Kovač, took over the in-game leader role. It led to victory in three games, so FaZe just managed to qualify for the quarterfinals.

Those results significantly impacted Karrigan and his state in general, leading to a break from social media to recover.

“It is a 'Karrigan' who is lost to self-confidence. A ‘Karrigan’ who might take a break to find himself again,” says ‘Karrigan.’

In December, It was announced that “Karrigan” was moved to a substitute position and will be seeking new opportunities.

Even though FaZe Clan had a rough time at the 2018 Majors, they accomplished some notable title wins; IEM Sydney, ESL One Belo Horizonte, and EPICENTER.

With the start of the new year, They announced the signing of Dauren "⁠AdreN⁠" Kystaubayev on a short-term contract to complete their roster for the upcoming Major. At the same time, Janko "⁠YNk⁠" Paunović was hired as the team's new coach as RobbaN transitioned to a managerial role at FaZe Clan. 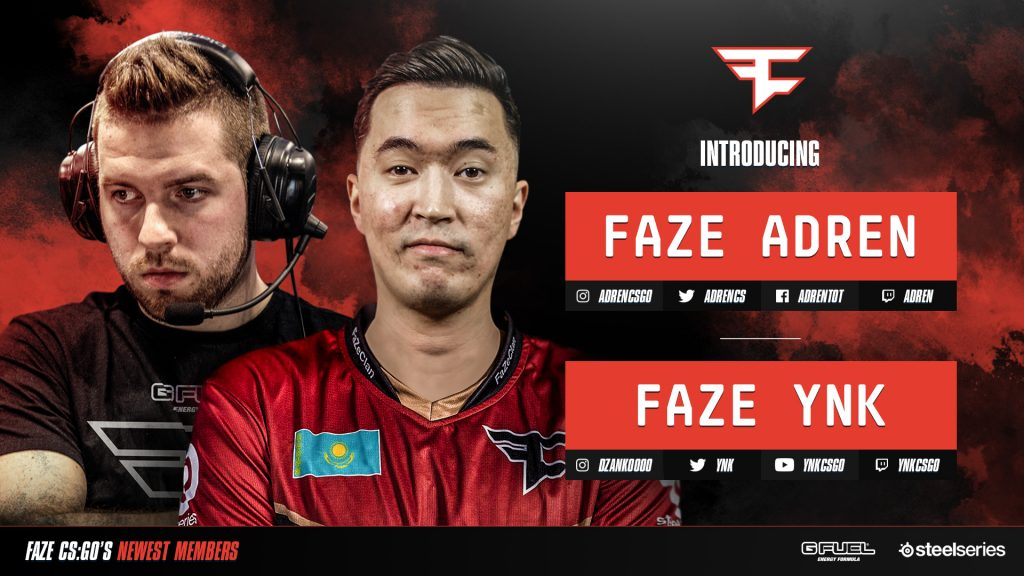 With “AdreN,” FaZe managed to stay consistent in the top 5 spot and lifted both ELEAGUE CS:GO Invitational & Blast Pro Series Miami with other 3-4th finishes at multiple events.

Even though the CIS veteran was supposed to leave FaZe after the end of IEM Katowice Major, he extended his stay as the organization was looking for the right fit for the role.

After signing “AdreN”, it would appear that he was the new IGL for FaZe due to his long experience fitting that role. Not until “GuardiaN” confirmed that “NiKo” was still the IGL and the one calling the shots.

The Kazakhstan legend left FaZe after five months from joining in transferring to AVANGAR.

"The future will show what will happen, if we keep AdreN or bring in some other in-game leader."

"At the moment, NiKo is the in-game leader, and we have to believe in him." - GuardiaN.

The departure of “Karrigan” & “AdreN” only meant that the team was having trouble with the IGL role regardless of “NiKo” calling.

For that reason, FaZe brought Filip “NEO” Kubski to fill the role on a trial basis.

In an interview with HLTV, “YNk” stated that the primary reason for adding “NEO” was because they needed another voice.

Unfortunately for them, they couldn’t achieve what they wanted. Their performance was dropping bit by bit with the ultimate fail at the Starladder Major in Berlin, where they finished 12-14th; that ultimately led to the release of the Polish veteran after five months with the international roster.

FaZe Clan struggled to find an IGL that could bring the team together and be a leader capable of turning any weakness into strength.

Not only were they far from achieving that, But they also lost their main AWPer, “GuardiaN,” after he went back to Na’Vi only a week after parting ways with “NEO,” which made the situation even more complex.

“I just accepted the fact that everyone needs a change because the past year was just a waste of time, I would say, I would call it a huge waste of time, traveling to events with stand-ins.” - GuardiaN.

There’s no doubt that FaZe Clan had to act quickly to make up for the empty spots within the roster. In the same week “GuardiaN” left, They acquired “coldzera” from MIBR.

Even though “NiKo” explicitly stated that nothing was going on with “coldzera” a couple of months prior to the signing.
“No, it was just that I made a comment for fun on a picture on Instagram he posted because we had been together in Belgrade when they came over for Janko's birthday, and I just made a stupid comment for fun and people went crazy about it. There's nothing going on right now” - NiKo.

The better days for FaZe didn’t stop there, and they managed to sign “Broky” only a day after coldzera’s announcement.

The young Latvian gun was on trial, and he seemed like a perfect fit, says “NiKo.”

“He's been trialing with us for a week and we are really happy with him and convinced he is going to fit our team very well.”

With the departure of “GuardiaN”, FaZe needed a dedicated AWPer. However, “Broky” at that time seemed like a rational move to make, considering his limited LAN experience and the fact that he’ll be playing with legends.

2019 was a rollercoaster with FaZe having so many challenges with the roster despite coming victorious as ELEAGUE CS:GO Invitational, Blast Pro Series Miami & Copenhagen champions.

With a line-up of legends and superstars, FaZe entered 2020 with hopes of having a better season and a stable performance.

Reality struck, and the team struggled to find success and underwhelmed performance that couldn’t close any titles or notable achievements except for 3rd place at some events.

“olofmeister” yet again decided to have another break due to the lack of motivation and fatigue. 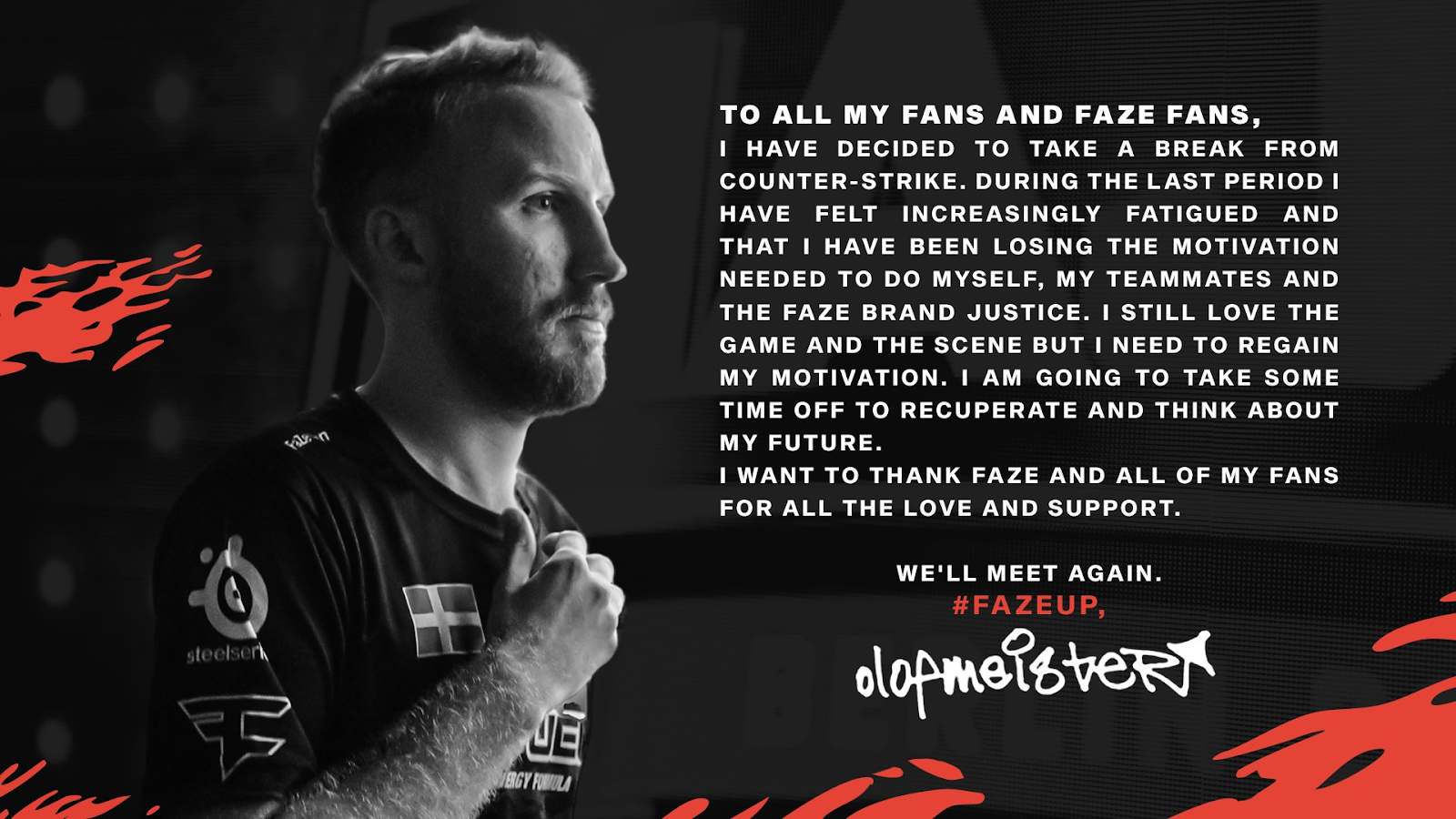 With “olof” taking a break, “Bymas” was signed as a stand-in.

FaZe followed the same strategy when signing “Broky”, With a lack of experience on the international scene and no matches against Top 30 teams.

The young Lithuanian gun would later face a real challenge at that level, “Bymas” was picked by “NiKo” as his bold prediction in the Top 20 players of 2019, which means that FaZe saw the potential he has after his remarkable FPL career.

After two month of experience playing with the international at the highest level, “Bymas” was acquired by Mousesports. During his time with FaZe, he managed to have a remarkable performance and secured third place at DreamHack Masters Spring and BLAST Premier Spring Finals.

FaZe took no time announcing the signing of Markus "Kjaerbye" Kjærbye. The Dane, who previously played for Astralis & North, was a free agent following his two-month break from competition.

The 22-year-old had a rough experience with FaZe regardless of coming 1st at IEM New York 2020 Europe. "Kjaerbye" left the roster with a 0.96 Average Rating.

“NiKo” played a big role in keeping FaZe Clan together regardless of the hard times, Challenge after Challenge and a knockout after another.

Sometimes you’d like to take it until you can’t take it anymore, and G2 closed in on “NiKo.”

With the Bosnian leaving, FaZe took a hard hit and went from limping to crawling but not for so long. 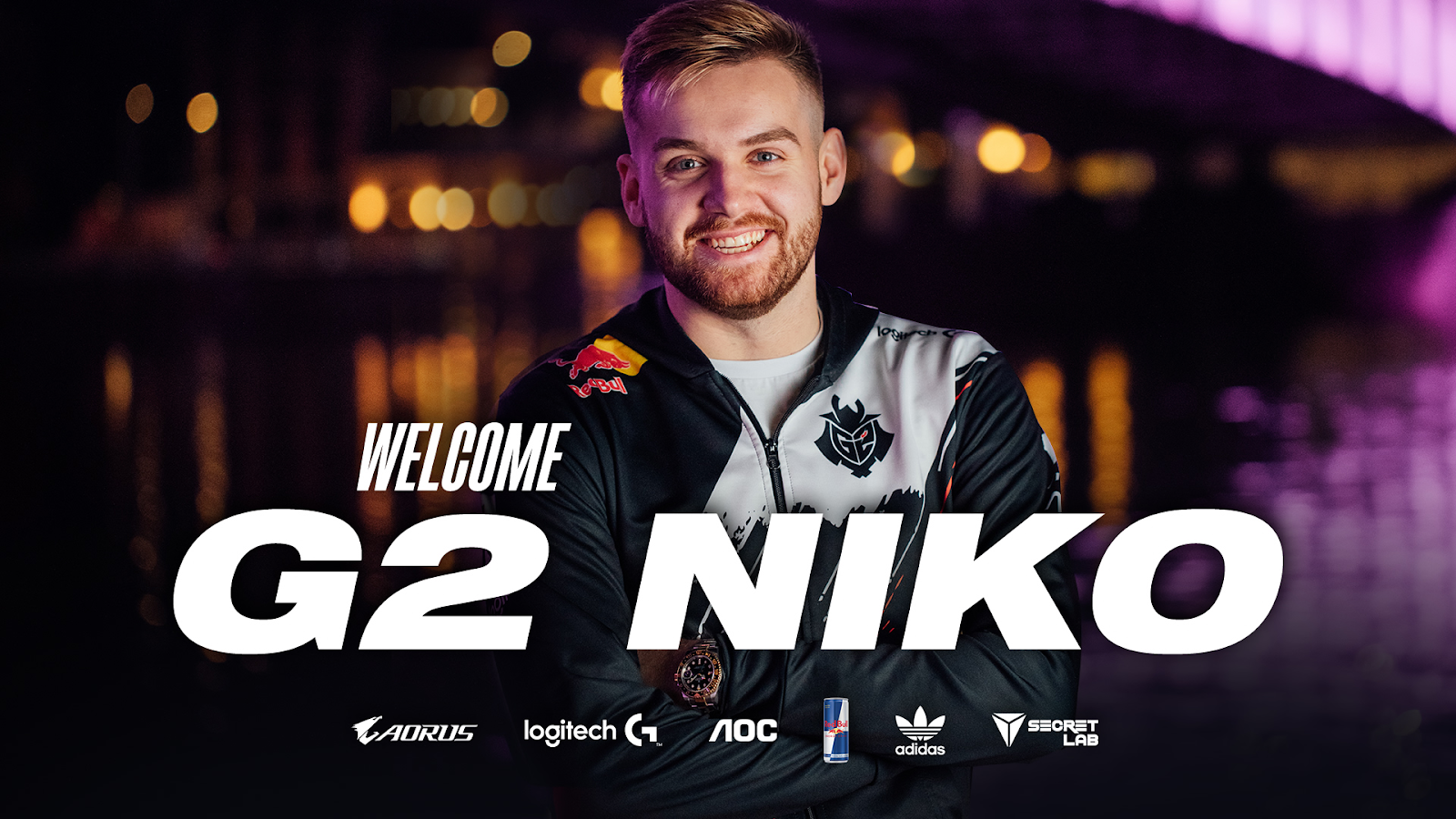 FaZe were working in the shadows after the rumors of “NiKo” leaving surfaced among the community to find a replacement. It wasn’t going to be any other player like before, but this time it would be a superstar that would make the difference, and that superstar was “Twistzz”.

Russel was about to leave Team Liquid after the hard season, only winning one tournament out of 15.

“Twistzz” is one of the best rifles globally; great aim & mechanics and a perfect fit to replace “NiKo.” Will things be any better with such a powerful addition to the team?

They were struggling so hard with no solid core that they had to bring the brains behind the team’s early success years ago.

“Karrigan” returned to FaZe after an underwhelming time with MOUZ, The organization did try to renew his contract, but Finn chose to explore his options.

"We have been in talks with karrigan in regards to a new agreement," MOUZ's Chief Business Development Officer, Jan Dominicus.

“He asked us for more time, as it's a big decision for both of us. Meanwhile, we are of course exploring other options to be prepared in case Finn wants to try something different."

The team didn’t click fast and struggled a bit which led to benching “coldzera” mid-year and reinstating “olofmeister” on the starting lineup.

FaZe was ultimately crafting the formula that would bring their glory back, but they were missing a secret ingredient that was none other than Robin “ropz” Kool.

Mr. Kool was the missing puzzle to make a championship-winning team.

They have been crowned champions of IEM Katowice 2022, ESL Pro League Season 15, and the year is starting.

It’s intense how “Karrigan” brought them to N°1 in the world four years ago just to do it again when he came back.

FaZe has the ultimate power of a line-up that could achieve so much; the brains of Finn mixed with the extreme talent of “Broky”, “Rain”, “Twistzz,” and “ropz.”

With such a team and early success alongside rising to the top, fans' & spectators' expectations for this team are high. Amazing performance while beating the top 10 teams only means that PGL Antwerp Major 2022 will be a big achievement for the line-up.

The future is bright, and only with time, we’ll be able to witness greatness being achieved.