FNC Jabz: “It has been kind of fun because [us and the TSM stand-ins] have been sharing ideas…It's like we're helping each other all grow together.”

Of all the teams taking part in the 2022 PGL Arlington Major, none has been as riddled with as many setbacks as Fnatic. Despite qualifying as Southeast Asia’s third seed, the team traveled to the Lone Star State with just two players on board, whereas the remaining group failed to obtain U.S. visas in time before the start of the event. That meant they dealt with a realistic chance of being replaced by another team.

Desperate times called for desperate measures, and for Fnatic, that proved no different. Following a frantic stream of deliberation, the team managed to enlist the help of three players from North America’s Team SoloMid - Enzo “Timado” Gianoli, Jonathan “Bryle” De Guia, and Kim “DuBu” Doo-young - to temporarily assist them for the Major. As a result, the move raised doubts as to whether they, propped by a hastily constructed roster that held little time to prepare, could contend with the rest of Group A to qualify for the playoffs, which consisted of the likes of PSG.LGD, reigning Major winners OG, Thunder Awaken, and Outsiders.

However, Fnatic responded by finishing fourth in the group with a 2-5-1 record, thus securing a spot in the upper bracket of the playoffs and setting up a match with Chinese side Team Aster.

Soon after Fnatic finished competing in the group stage, their team captain Anucha “Jabz” Jirawong spoke to BLIX.GG in an exclusive interview over his team’s performance in the Major up until that point, how they managed to acquire three stand-ins, moving on from the Stockholm Major, and much more.

Pedro Romero, BLIX.GG: Congrats on managing to reach the upper bracket for the playoffs in the Arlington Major, Jabz. First off, I'd like to know your initial thoughts on your team reaching this phase in the main event phase.

Anucha “Jabz” Jirawong: I'm not sure if I can think of anything. We just played well and did what was supposed to be done. It just happened.

BLIX: In a way, I guess you can say the team was fairly confident about reaching this point in the tournament?

BLIX: So it's just a matter of whatever happens, happens for you guys?

Jabz: I mean, we just want to play good Dota and have fun.

BLIX: And it's through that mindset you guys managed to do well thus far. Talking about this group stage, this was a group that many expected to be a tough one for each team to navigate through. You already talked about the mindset the team had. but how exactly did you guys prepare against these other teams in this group that feature such heavyweights such as PSG.LGD and OG?

BLIX: Of course, there was this anticipation about what kind of playstyle the Chinese teams would bring to the rest of the world since this marks the first time in the DPC they played in an actual international LAN environment. What did you make of China's playstyle thus far?

Jabz: For me, I expected them to do well in this tournament because we scrimmed a lot against Chinese teams, and we know that they are pretty good. They changed the way they play, such as how they play really fast, so a lot of the teams are trying to copy them.

BLIX: So the entire tournament field has gravitated towards resembling China's play style? Has that been the theme for the Arlington Major?

Jabz: In this meta, everyone wants to play fast. They all want to take the towers and take over the map as quickly as possible.

BLIX: One of the biggest storylines concerning this Major is the fact that your team fielded three stand-ins for the tournament. Fnatic is playing with Timado, Bryle, and DuBu from TSM for the tournament. What has that process been like for this team to bring in three new players from a different region and try to mesh with them for a limited amount of time?

Jabz: It has been kind of fun because we have been sharing ideas such as how we should approach the game. We talk about Dota, and we'd have the idea, and then they'd have an idea of their own so that we would share them together. It's like we're helping each other all grow together.

BLIX: In that regard, have there been any difficulties that you guys previously encountered while preparing for these group stage matches?

Jabz: Not really because the way they see Dota and how we see it is kind of similar.

BLIX: With all this talk about TSM loaning their three players to Fnatic for the Major, was there prior concern about this team not being able to play in the Major as a result of not having a majority of the squad being unable to attend before TSM offered their players?

Jabz: Yeah. We got a last-minute message from Valve that allowed us to use three stand-in players. Before that, we were about to get replaced by another team.

Cavalry has arrived. Thank you TSM for loaning us the legends DuBu, Bryle and Timado who will be standing-in for Jau, Armel and Raven. 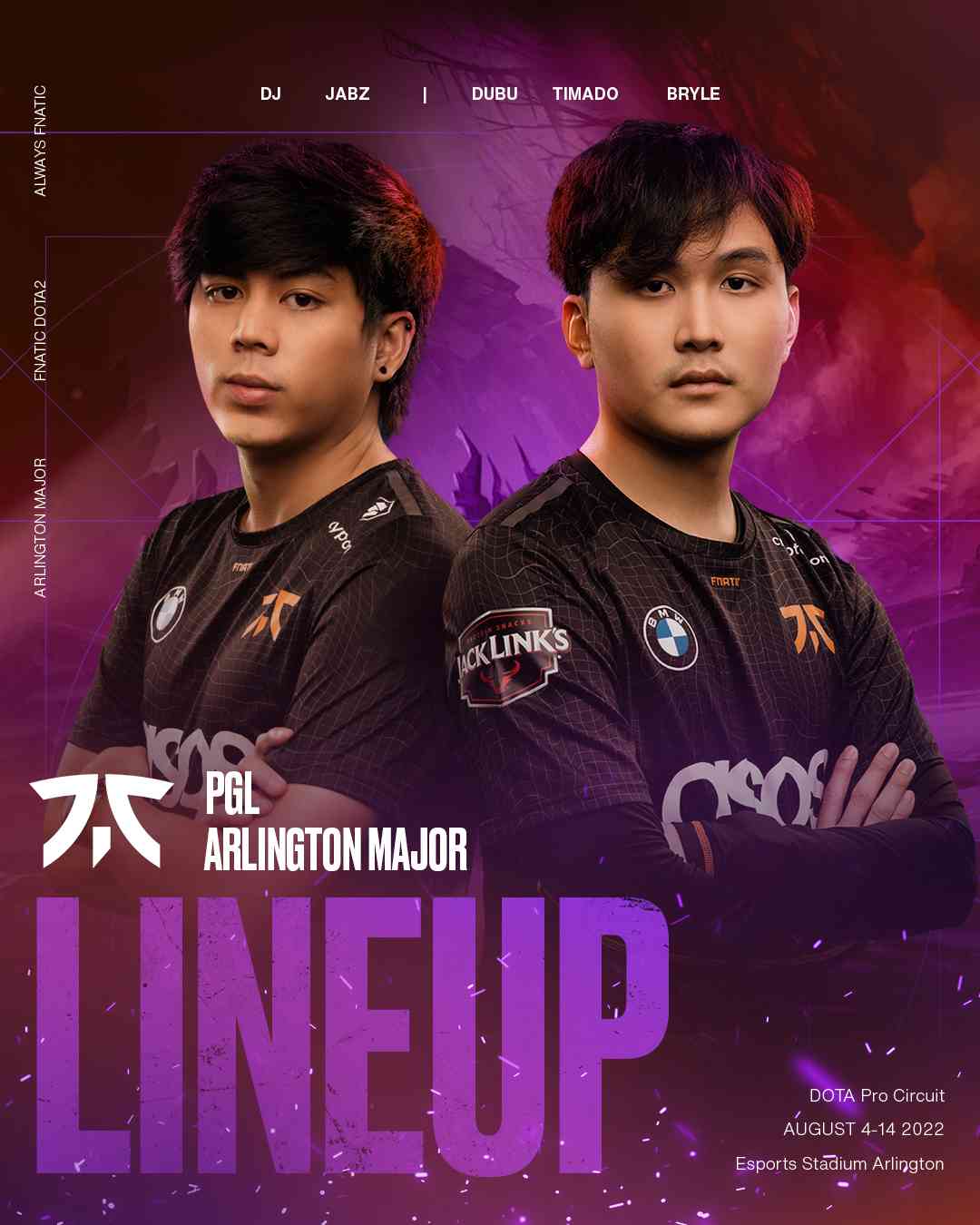 Moving on from Stockholm

BLIX: Despite that, you guys managed to progress to the upper bracket of the double-elimination for the playoffs in the main event. Talking about what happened since playing in the Stockholm Major, how did this team adjust their playstyle for this Major compared to what happened in Sweden?

Jabz: We just knew what the meta was about in this tournament. As for me, I think I was just trying to focus on myself and play better.

BLIX: How much has the meta transitioned from Stockholm to Arlington?

Jabz: The game has become faster and more chaotic.

BLIX: You did an exit interview following the team's elimination from the Stockholm Major, and you spoke about how disappointed you were for not managing to go far in the tournament. How have you channeled that disappointment from Stockholm into use for this LAN in Texas?

Jabz: For me, I just wanted to be a better player so that I don't get disappointed by myself again.

(Credit: Beyond the Summit)

BLIX: Another particular facet concerning yourself is the fact that you've been with this org for quite a long time (around four years, to be exact) which makes you a staple within the team. Given your progression with this team from when you started, how have you progressed as a leader in terms of being more vocal, improving your mental, and adapting to the game?

Jabz: I think I improved a lot compared to the previous time before I joined this team. There are not many captains in SEA, such as myself, who could step up and do it.

BLIX: Obviously, you've seen many iterations of Fnatic when it comes to Dota. How would you describe this current iteration compared to all the teams that you've played with before?

Jabz: I think we actually have the best in every role in this roster. We just have to make it happen. We just need time to practice.

BLIX: With all of this concerned, you guys now look ahead to the playoffs where you will play against Team Aster. What are you expecting to see out of them, and what is the team's general confidence level against your upcoming opponent?

Jabz: I think their players are solid. The way Chinese teams approach Dota is very disciplined such as how they don't make a lot of mistakes. We just have to play well and look to win the game. We're not really expecting anything.

BLIX: Taking a look at the rest of the region, the other two teams from SEA who are taking part in the Major are BOOM and Talon Esports. Unfortunately, Talon couldn't progress to the playoffs, whereas BOOM did. What are your thoughts on SEA's performance thus far after the end of the group stage?

Jabz: I think BOOM could have done better. On the first day, they played really well, but after that, from the second day onwards, they played kind of bad. I think they forgot something along the way before eventually coming back. But for Talon, it's kind of hard to say because Q is like the team captain, and he couldn't come here because of the visa issues he faced, so they're playing without a captain. It's really hard for them to perform well.

BLIX: Steering the direction back towards yourself, what do you think of this experience of playing in Texas thus far?

Jabz: I know it's the summer, and it's hot, but I didn't know it was going to be this hot. It's hotter than where I came from. It's like hot and dry. I've been to the US four or five times, and each visit always feata corridor. And then like this kind of surprised me.

BLIX: I'm kind of surprised. I assumed living in Thailand would have been far hotter than living in Texas. Nevertheless, what do you think of the food? Have you eaten any Texas barbecue?

Jabz: We had barbecue, but we ordered it online. We haven't really gone out to eat, so I'm not sure about how the actual food is like. Normally, we just order some Asian food.

BLIX: That's unfortunate. It would have been awesome if you guys ate some barbecue and just experienced the quintessential Texas flair.

Jabz: It's kind of sad that we have no time for that due to the schedule.

BLIX: Regarding the current Major, there has been plenty of stand-ins playing in this tournament, with many teams being unable to field their full rosters (Fnatic included). What do you think of this current state of the Major in which not all teams have been able to play at full strength?

Jabz: I think we didn't have enough time after the DPC ended to work on our visas. That's because we actually flew to another country to do our visas before the finish of the DPC. We flew to Brunei and Indonesia, but three of our teammates still couldn't make it through, so it's really sad. But I heard next year we're going to have more time to do visas, so it's pretty good.

BLIX: Valve has made some changes to the next DPC. Now, Division I is to be played within a month in its entirety for its regular season. That is to be followed by Div. 2 for the same sort of time duration. What do you think of this change in format for the DPC next year?

Jabz: I think it's better because once you finish the season, you'll have more time to work on getting a new visa and rest too.

BLIX: Thank you so much for taking the time to do this interview. Do you have any final words to share?

Jabz: Thank you for continuing to support us. We'll try to play well and have fun while doing it.