GodParticles, the free-agent team making waves at the South Asian VALORANT Conqueror’s Cup, were just disqualified from the VCC: Playoffs, but Riot Games have now revoked their decision. The disqualification was announced right at the start of the third map in the series against Khumbu Esports, at which point the series tied 1-1. The disqualification was awarded due to an abuse of the Haven Jett C Site jump bug performed by GodParticles Jett player; Abhay “KnightRider” Mulchandani. However, this disqualification has now been revoked and they, along with other teams, have been issued a strict warning against usage of the referenced bug. 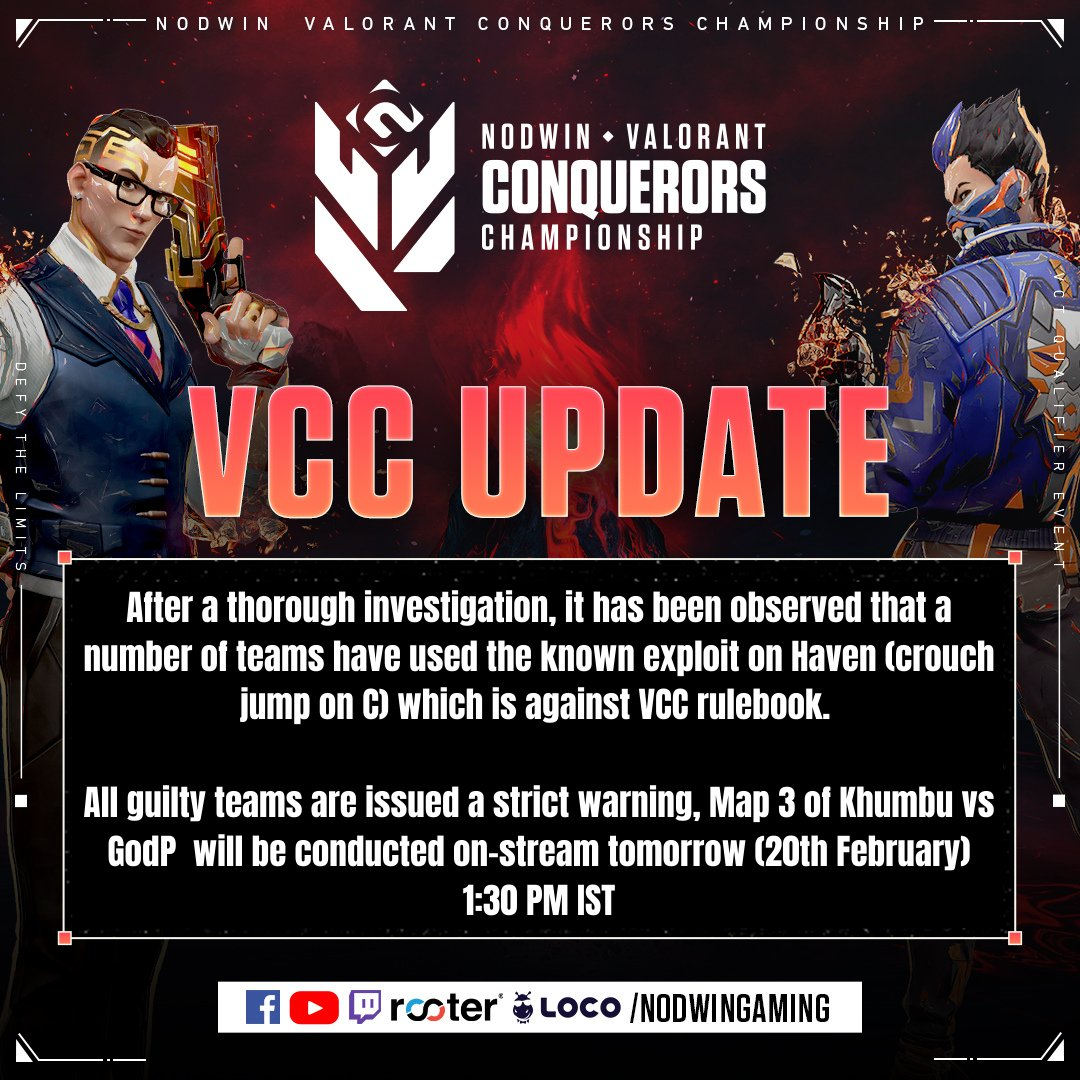 The instance of abuse:

KnightRider was seen making use of the bug in the 23rd round of the map, to peek down C long with his operator. The score was 12-10, and GodParticles needed the round to further close down on their comeback. However, they lost the round, and the map. They did end up winning the second map, at which point their disqualification was announced and resulted in forfeit of the third map and series.

The GodParticles roster consists of: Abhay “KnightRider” Mulchandani, Garvit “Ember” Nehra, Divyansh “Scarg0d” Jain, Shivam “sh1vy” Ajmani, Shane “WhiteHorse” Kariwow. They had defied all odds, and many salaried teams, to make it to the cusp of the regional competition. The Godparticles players however are not in favor of the decision to disqualify them, which at the time of writing has been revoked. Abhay "KnightRider" Mulchandani has commented on the disqualification on Twitter:

KnightRider claims that most other Jetts in the region have made use of the bug, and is currently streaming on YouTube, going over clips of all the other Jett players who have used it. Seems like this has put quite the pressure on NODWIN Gaming and Riot Games, which lead to them having to back out of the disqualification. Team Exploit's Mustafa "shooteR" Kamal is the only Jett to have been confirmed to not have used it in the event. Team Exploit is well known to instantly ban Haven, and thus have not made use of this bug by any chance.

The ‘abuse’ in question:

The bug that was abused in reference here is the C site jump boost, that allows Jett to consistently get on top of the C site box without the use of her updraft. The bug is shown in the following clip.

This bug has been inducing conversation in the VALORANT competitive scene for a decent while. Last year, during the VALORANT: Champions event, FURIA, had used this bug in their game against Sentinels. However, they were let off with a light slap on the wrist, a warning in a lengthy timeout that lasted 15 minutes.

In more recent times, in the VCT: Singapore and Malaysia Challenger event, OG BRUDDERS were disqualified for what remained of Stage 1 of VCT. This sparked conversation in the VALORANT community, due to the controversial aspect of the so called 'bug'.

Are the penalties deserved?

The bug, which can be performed with any agent, is exponentially more reliable in combination with Jett's gliding ability. However, if this is truly unfair, or against the spirit of the game, or just a skill jump is still up for debate. However, Riot Games have made their stance on the matter clear. Although not consistently enforced, Riot Games with these previous instances have made it clear they will not entertain a use of this bug in competitive play.

However, if it is even unfair, is a question that can be put forward. All Jetts can perform this jump with ease, and it does require making use of the game mechanics in a creative manner, but it is possible for both teams to do it, and technically every agent in the game to do so, just not as reliably as Jett. OG BRUDDERS have been disqualified from Stage 1 of VCT, whereas FURIA and GodParticles both have been left with a slap on the wrist. The punishment is clearly inconsistent, and hardly seems fair.

Questions have also been raised about the same bug being ‘abused’ by Ryan “Shanks” Ngo in Rise’s recent VCT: NA game against Optic VALORANT. The players mentioned were let off with no punishment and the game continued as normal.