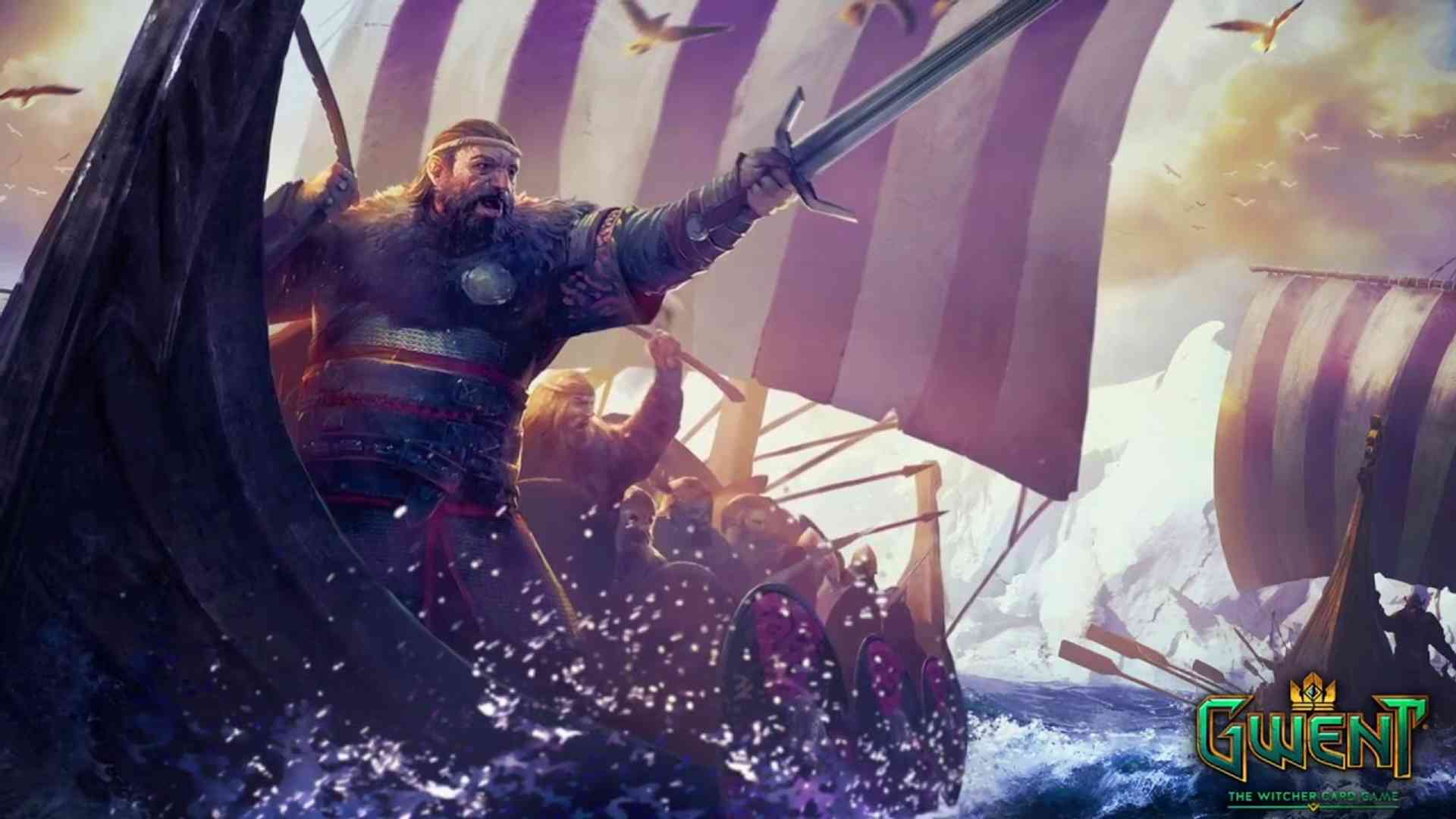 The fifth day of the reveals brought us the Skellige faction. Even though the Warriors archetype has probably been one of the most supported archetypes over time, CDPR decided to make it stronger once again.

Remember the values of provisions and strength are still subject to change until the official release on October 4! 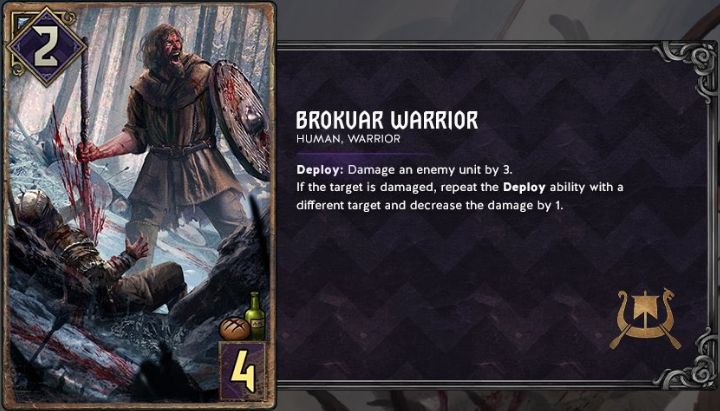 The new Brokvar Warrior card for Skellige, featuring a warrior wielding a spear and shield, splattered with blood

Yet another great bronze card for Skellige warriors.

4 provisions for 2 strength and 3 damage on deployment. If you manage to meet the condition of damaging the first unit you target, you can damage another unit for 2 more damage, and possibly another unit for 1 more point. For a total of 8 points for 4 provisions. This card is similar to Falibor, except Falibor has 11 provisions, and his conditions are harder to meet in order to get the full value. 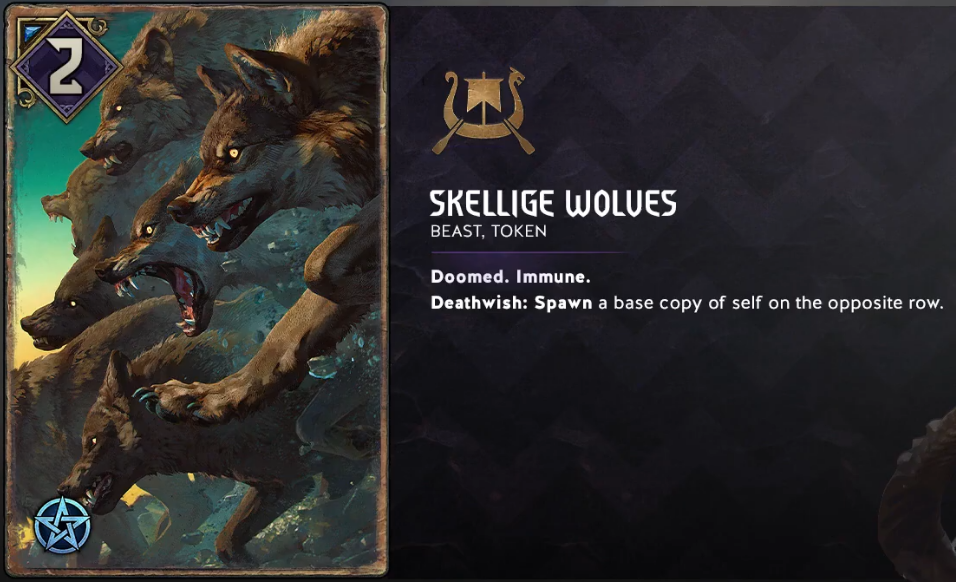 A token card for Skellige. It will see play in Warrior decks that play raid support cards like Highland warrior. 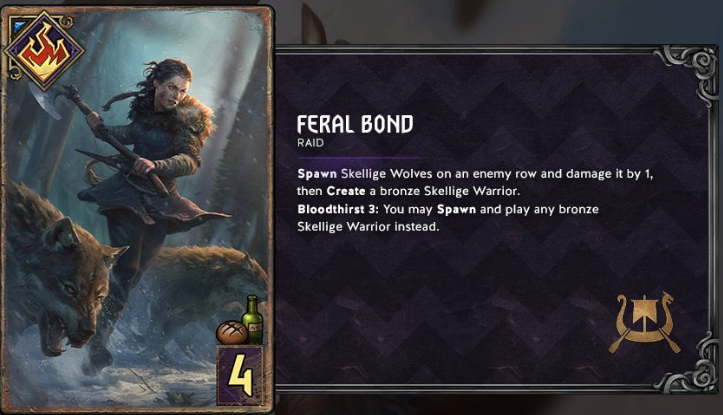 A woman wielding an axe dashes through the snow with baying wolves beside her on the art for Skellige's new Raid card, Feral Bond

A 4 provisions, Feral Bond is a raid support card that lets you spawn Skellige wolves on the enemies side of the board and damage them by 1.

However, if you play Highland warrior in your deck, you’ll damage the wolves by 2. Meaning the Feral bond will actually instantly give you +2 on your side of the board by killing Skellige wolves immediately.

Besides that, the card lets you create a random bronze Skellige warrior. Or, if you meet the condition of Bloodthirst 3, you will be able to spawn and play any bronze Skellige Warrior instead. 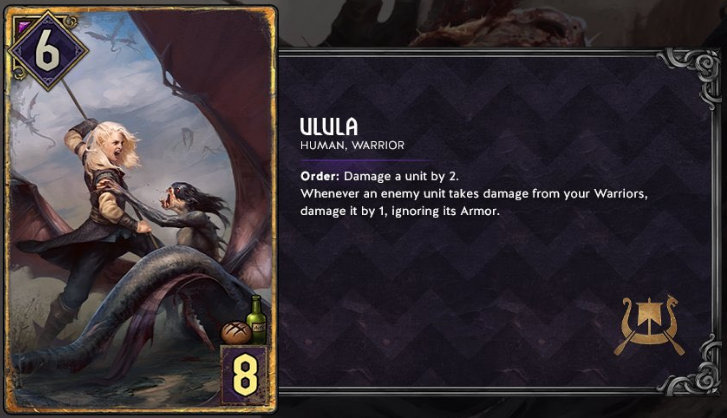 This card comes down to 6 strength for 8 provisions on deployment. Her order ability damages an enemy unit by 2, which means she will instantly play for 8 for 8.

However, her passive ability is to damage an enemy unit every time you damage it with any of your Warriors — while at the same time ignoring their armor. Since Warriors have an ability to damage enemy units pretty easily, she’ll probably work the best with Warriors with multiple instances of damage; like An Craite Marauder that splits 2 damage randomly to enemy units. If you play An Craite Marauder after you play Ulula, she will get 3 extra points just for that. 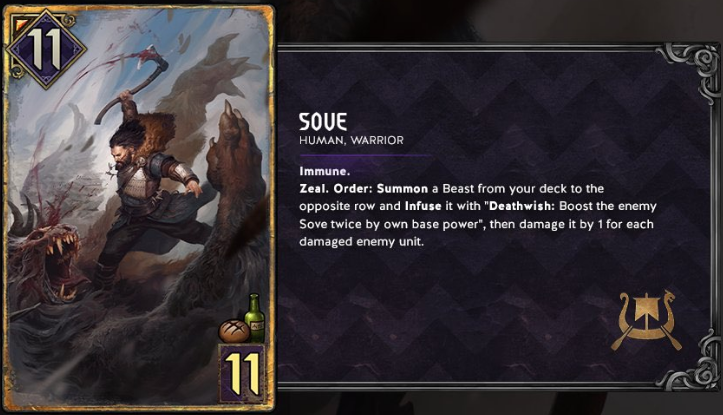 The warrior Sove raises his axe high above his head, ready to bring it down upon the face of a giant feline monster in the art for Skellige's new cards

This card has a very high base power of 11 for 11 provisions. And i t has immunity, making this card nearly untouchable.

Depending on the deck you’re playing against, and since this card has immunity and order ability, you can choose to float the card and not use the order ability immediately. But, once you choose to use it, it can play for many points.

Firstly, this card will probably see play in Eist and Patricidal Fury decks. Once you summon this card on your board and use the order ability, you have an option to summon a Beast unit from your deck to the opposite row and then Infuse it with Deathwish ability.

Then damage by 1 for each damaged enemy unit. Since the unit will be infused with Deathwish ability, once it dies it will boost Sove 2 times by the total amount of base damage. What this means, is that if you choose to Spawn lets say a Raging bear on the opponent side of the board which has 8 base power. Once you kill it, it will boost Sove for the total amount of 16 points, so Sove will in the end play for 27 points, which honestly, seems totally insane right now.