The Skellige faction is not too complicated and relies mainly on damaging units — both its own and its opponents’. Most cards are easy to understand therefore Skellige shouldn’t be too complicated for newer players. They have a few viable archetypes and pretty decent position in most metas. With so much removal they’re arguably the most aggressive faction and quite fun to play. Now let’s talk about which Skellige cards you should craft first when you are just starting your adventure with this faction.

A very good and very versatile card. It basically lets you replay a unit of up to 10 provisions from your graveyard — something Skellige is known for. Picking weaker units like a 4 or 5-provision one doesn’t leave you at disadvantage as unused provisions are transformed into rain which damages enemy units. This means Fucusya will almost always find good value and you can’t go wrong with including her in your deck.

But the best thing about her is the flexibility she provides. Since you can replay any Skellige unit as long as it has 10 provisions or less it opens many options for you. Just to give you few examples: you can bring back your huge Melusine, resurrect your defender in another round, play tall punish card like Hjalmar or Morkvarg: Heart of Terror again, or replay any of your many engines. You can even bring back something small just to convert unused provisions into damage and get some rain synergy.

Since you have many potential targets for Fucusya she can’t really brick unless you play her while having an empty graveyard. This card easily finds great value and that’s the reason why it is probably the most picked option from Magic Compass. Adding her to your Skellige deck will just make it better.

A very nice tall punish card that keeps hitting enemy units until it is damaged. Obviously it works best on boosted units as they’re not considered damaged until they lose all the boost and their base power gets chipped away.

Morkvarg is a great counterplay to cards like Sunset Wanderer, Kolgrim or Gord. He also very cleanly deals with Yghern (since he loses all his armor in order to get damaged) or Nilfgaard defender that has just 1 base power. Morkvarg is not the cheapest in terms of provisions but it can find great value in most matchups. However, it can be quite bad against another Skellige deck as this faction don’t really rely on boosting their units in most cases (while there are some decks that do; you’ll need some experience to know when to keep Morkvarg and when to mulligan him away).

Another tall punish and great removal tool. It banishes a chosen card from your graveyard (meaning it can’t be reused with Fucusya so watch what you are banishing,) and damages an enemy unit by the banished unit’s base power. Usually you should aim for banishing at least an 8 or 10 power unit to maximize your damage.

Same as Fucusya, it can be awkward round 1 when you don’t have your graveyard developed yet. But these usually aren’t cards you want to play round 1 anyway. Also note it is row locked, meaning it has to be played on your melee row to use its ability. This is important especially when playing against Nilfgaard as they can clog your melee row with spies — which effectively bricks your Hjalmar. 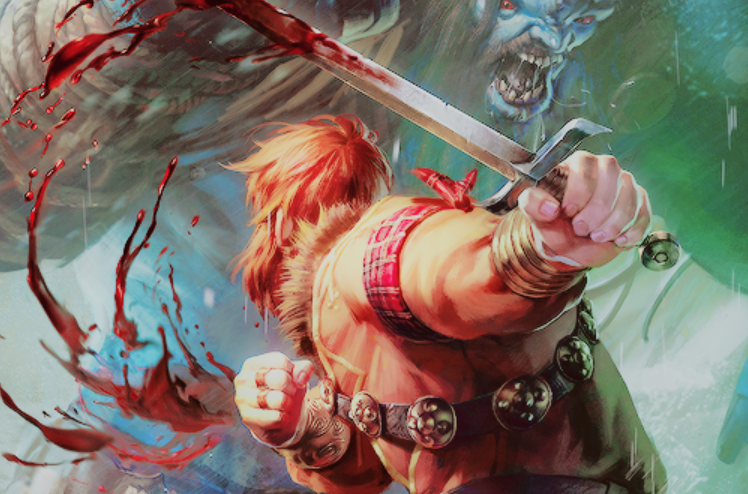 Coral is part of the so-called discard package. It’s a set of cards that can be used in almost any Skellige deck, providing good value and — more importantly — increasing the consistency of your deck. A discard package shouldn’t really be split, so if you play Coral you should also include the other cards we mention below.

Coral does two things; she has order that lets you draw a card and discard a card (move to your graveyard) and her passive ability damages a random enemy unit by 2 whenever you discard a card. This creates some nice combos that play for a lot of points if you get the correct cards.

Your targets for discard should be Tuirseach Skirmishers or Morkvarg (it’s different card than Morkvarg: Heart of Terror). Those units — when they get discarded — are summoned to the battlefield. So playing Coral, using her order to discard Morkvarg and utilizing her passive ability plays for 13 points.

If you use Mask of Uroboros strategem on Skirmisher you instantly get another 10 points (4 points from Skirmisher coming back, 4 points thanks to two crows spawned by strategem and another 2 points from Coral damaging the enemy due to another discard). This is great tempo play that provides thinning for your deck. This combo also has some removal potential because you are able to use both the strategem and Coral order in one turn, resulting in 4 damage done to random enemies. And if there’s just one enemy, it’ll get hit by both pings which can kill a 4 power unit. All this makes Coral and the discard package a great choice for any Skellige deck.

Another important part of the discard package, it works best if played in the same round as Coral. Birna draws two cards and discards two cards (don’t make the mistake of playing her with 10 cards in your hand as she will only draw/discard one card in that case).

Your targets should again be Morkvarg and Skirmishers, if you’re missing these, then just discard your least useful cards. If Coral is on the board and isn’t locked, you will get another 4 points from her passive ability in the form of 2 damage pings to random enemies. The main problem with the discard package is getting all the required cards. The ideal situation and dream of every Skellige player is drawing Coral, Birna, Morkvarg and two Skirmishers in the same round. This plays for crazy points and greatly thins your deck.

But even if you miss your combo, Coral and Birna provide you with some flexibility. They can allow you to draw that precious gold you’ve missed or discard a bricked card that crippled your hand. The discard package is just a very solid choice for any Skellige deck and one of their best tempo plays.

The main target for Coral and Birna. In rare cases it can be played from hand which will allow him to come back to the battlefield if he is killed. But that’s not really the optimal use of Morkvarg and you should mostly try to discard him. He also works pretty well with Derran. However this ‘waters down’ your discard package as your Coral and Birna lose one discard target this way.

Another discard target, should never be played from hand. When both of them get discarded by Birna you get 14 points tempo play, even more with Coral on the board. However you have to be careful with discard cards so you don’t brick. It is quite devastating to end up with discard targets in your hand but missing Coral and Birna so sometimes it is best to mulligan them away. They present very little value if you don’t have at least part of the combo.

This card is basically a less powerful Birna, it draws one card and discards one card. It’s sort of a backup option in case you miss your Coral and Birna. Adding one Skald to your deck is usually enough. When playing with the discard package keep track of your discard cards and discard targets. Note that you can discard four cards in total (one from Coral, two from Birna and one from Skald) and you have three discard targets (Morkvarg and two Skirmishers). So mulligan cards accordingly because you may be forced to discard your good golds in some cases.

Also remember that if you brick, you can always play your Heymaey Skald in the melee row to ignore his discard ability.

Usually played in the pirates archetype, it can still find value in most Skellige decks as they rarely lack damage. Deranged Corsair can play for twelve points if used correctly and can shut down two or even three engines.

What you want to do is infuse an enemy unit on deploy with Corsair’s ability and then make sure that unit dies. This will result in a total of three turns of Cataclysm on the enemy row (each turn units on that row get hit by 3 random pings). Ideally you want to kill the infused unit on the same turn you played the Corsair — whether with your leader ability or damage pings from other cards. This makes sure the opponent won’t have the chance to react by boosting the infused unit or protecting it otherwise.

Deranged Corsair isn’t the easiest card to use but if you learn how to use him properly, it can play for great value.