After an agonizing month of Renfri in every deck you came across, we are finally blessed with the new meta.

CDPR celebrated its 20th birthday and gave us a new patch (10.8) with a lot of diversity.

As hinted at the start, the most troublesome card last patch, Renfri, received some nerfs, although some portion of players still includes it in their decks. Syndicate seems to be the leading faction, followed by Scoia'Tael and Northern realms. Skellige received a nerf, but it is still competitive. Monsters and Nilfgaard are niche factions.

All in all, the meta looks much healthier and balanced than last season, and all factions have at least one viable deck that can get you a high rank.

Self-poison is not a new archetype, but it has finally found its meta. The deck has almost all the tools you need in a deck: Double Golden Nekker coupled with Alissa Henson that lets you win round 1 comfortably, great lock and seven body with Aguara, carryover with Ciri: Nova, Salamandra Hideout, Conjurer's Candle, a little bit of thining with Roach, and our old friend Drill, which feels amazing when coupled by playing Crime special cards. Of course, there is an abundance of tall

punish with poison. There is Adalbertus Kalkstein for purifying; if we didn't already convince you, this list has all the tools you need.

As with most decks in recent metas, you want to win Round 1. All the cards in the deck are below ten provisions, so you do not have to be frugal with your gold cards. You can commit any of your gold cards, including Golden Nekker,

to win Round 1. If you used Golden Nekker in Round 1, you should try getting it back in the deck with Alissa Henson before round 3 since a long final round is what you should be going for. Aim to set up the Candle, place it down for Azar Javed, and buff his scarabs. Your engines should be safe from that point on. Remember if you will need tall punishment for Northern Realms, or maybe you will need the Drill to get rid of Deadeye Ambush elves.

However, this deck is one of the hardest to play. It is very easy to over profit, so be wary of that. It would be good if you could remember what options Shady Vendor and Stolen mutagens give to minimize randomness.

Sequencing is complicated since there are more ways to play your turn, but there is typically only one way to perfect coin management. 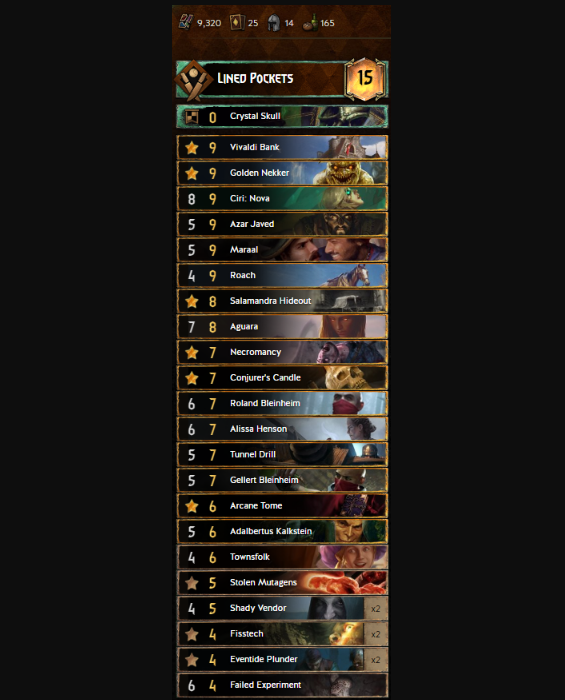 This version of Royal Inspiration is one of the decks that try to use the new scenarios recently added. And among those new scenarios, Damsel in Distress is the one with the most points.

Since Royal Inspiration got a rework, it works extremely well with Knights and cards with Grace mechanic. It is easy to contest round 1 starting on a red coin with bronze knight engines.

Winning round 1 protects you from an opponent's attempt to bleed your Damsel in Distress in round 2. Moreover, by quickly accumulating points, you are making your Aerondight stronger for later rounds.

Naturally, with such a high-tempo deck, you should try winning round 1 by playing the Squire into Knight Errant. This will give you a nice engine, which you can use to boost the reworked Vandergrift.

Vandergrift now has a Grace ability that lets you gain resilience one more time after deploying him. Your other engine type is Damned Sorceress coupled with Windhal, of Attre or Immortals.

Deck has a little bit of a problem with pulling cards you need consistently. That's why Lady of the Lake is included, so it will be much easier for you to get Amphibious Assault, Oneiromancy, or Aerondight.

Since this deck has a lot of boosted units, it is susceptible to tall punish like Geralt: Yrden or many poisons of Syndicate. Furthermore, this list is also weak against control decks like Pirates. 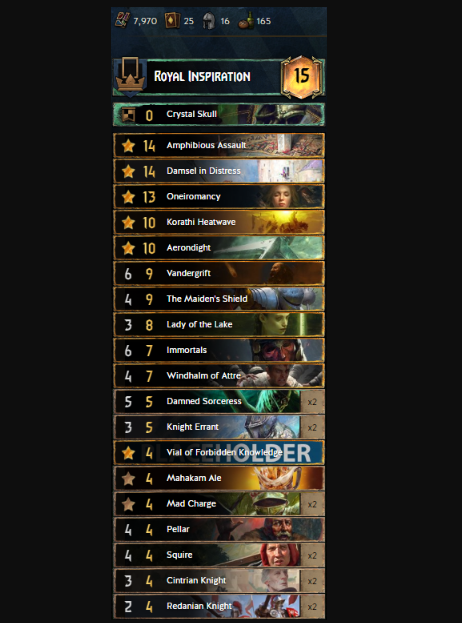 Harmony is back on the menu after a long time. This time it is mostly because of a couple of new cards. Mainly the new scenario Mysteries of Loc Feai, which can produce a lot of points in the later rounds.

However, Saskia: Commander is your bread and butter. It is excellent for contesting round 1 and thinning your deck at the same time. It has great synergy with pulling out bronze Harmony cards like Antherion or

Dryad Fledgling. Milva: Sharpshooter works well with your order ability and Cat Witcher Saboteur. It can take out 4-point bronzes with ease. In addition to Harmony units, it has four poison cards. 2 Dryad Rangers, 1

Weeping willow and 1 Forest Whisperer. Mysteries of Loc Feainn give a good amount of points, but it is a mid-range scenario. However, unlike most scenarios, it trades well with Heatwave since, on deployment, it is instantly 9 or 10 points, depending on how many different unit tags you have put in your deck. 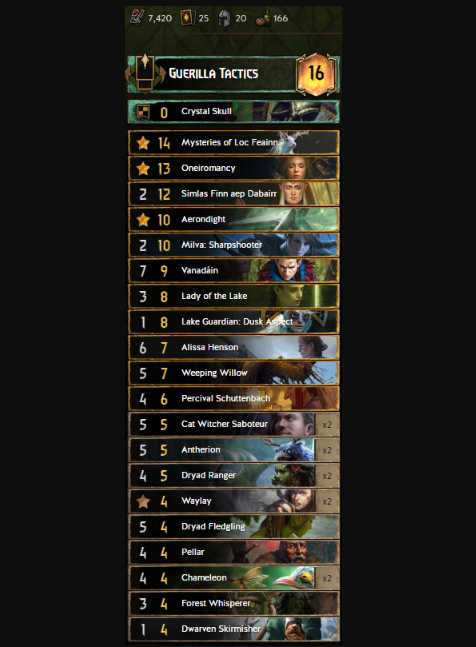 Deadeye Ambush elves are still a strong choice for this meta. They haven't been touched by a nerf hammer recently. It feels a bit weaker than Harmony, but it can still generate a lot of points. Your core cards will be Feign Death,

Vernossiel, Isengrim and Simlas Finn aep Dabairr. Additionally, Free Company feels amazing since it got buffed, so you are able to boost all of your bandit elves. When you get round control, it is straightforward to generate tempo, which few decks can respond to.

If you manage to pull a scenario in round 1 and you are on the red coin, you should try playing it since this deck has enough points in later rounds to make up for the greedy round 1. You should try setting up Vanadain to get your Waylays into the graveyard, so you can later bring them back into your deck with Alissa Henson. Remember that this list is very draw-dependent, so with a suboptimal hand, or if your opponent decided to bleed you in round 2, you might struggle to defend it. Since you will have a lot of Waylays in your deck in later rounds, there is a high chance of bricking with some of them. 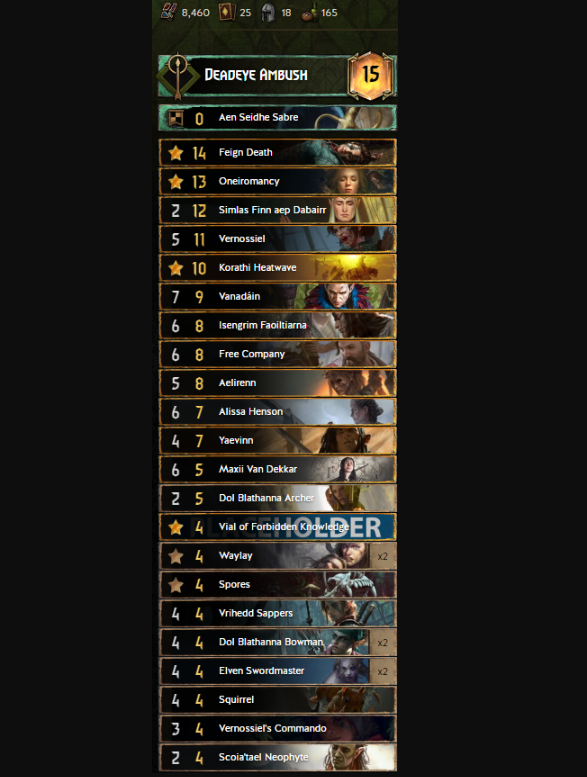 Skellige took the biggest hit when Renfri was nerfed, but it can still hold its own in this meta. Pirates have very good consistency with the discard packages of Coral and Birna Bran. You should aim to use all your mulligans in round 1,

so you can find the discard package. Since the deck usually thins to 0 cards by round 3, don't hesitate to mulligan some of your golds that aren't required to win round 1. Try having Terror of the Seas and Bjorn Stormursson in your

opening hand so you can get high armor values on them, since this armor is valued as your carryover for later rounds. Bully your opponent with Deranged Corsair and ping his units with Dimun Light Longship. If you win round 1, you can

try bleeding your opponent in round 2, just make sure you have less than 2 cards left by round 3. So you can effectively use Magic Compass. In most cases, you will want to play Fucusya with it, but sometimes you will need something like

Morkvarg to get rid of tall boosted units. 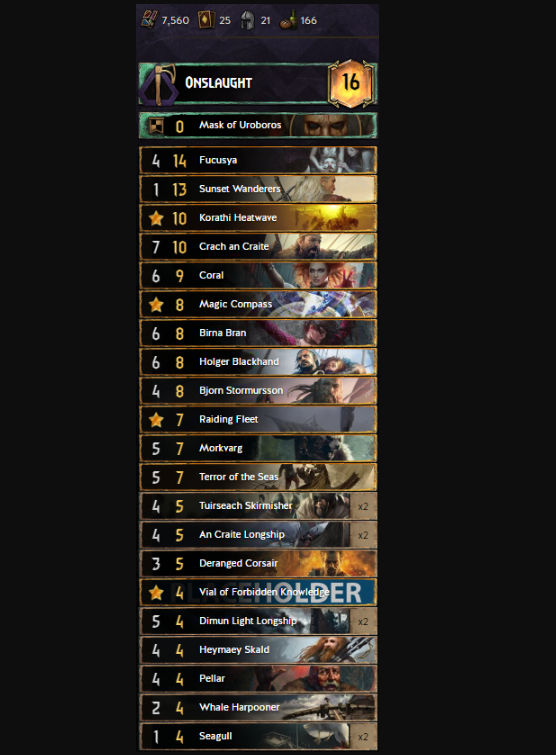 Koshchey made his return this season. Coupled with Caranthir Ar-Feinel and our beloved Sir Scratch-A-lot, it feels strong to play in long rounds. This list also uses the new scenario added, The Manor's Dark Secret. With this scenario, you can try to contest round 1.

In the past, it was hard to win round 1 with Koshchey, and opponents would usually bleed you out in round 2. Try finding your scenario in round 1 and use it to put pressure on your opponent with Cursed Damsels. In the following rounds, try setting up your Sir Scratch-A-Lot by floating kitty, then play Caranthir into Koshchey and Koshchey itself.

Make sure to take notice of Koshchey's adrenaline ability, so you don't play it too soon. 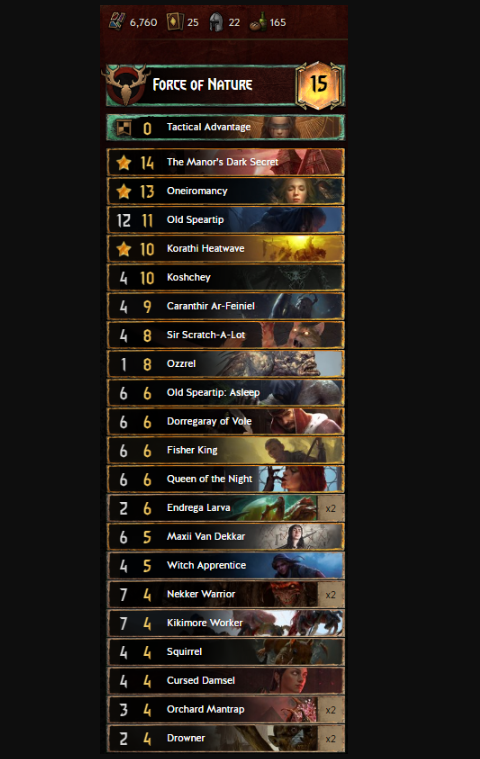 Maybe not as strong or popular as other decks, Skellige self wound still has its place in the meta. Try to get your defender and Melusine in round 1. In most of the match ups, you want to set up your Melusine for that sweet carryover since in theory you are to play her 3 times, which is crazy good value. However, keep in mind that this meta is revolved around scenarios, and when there are scenarios, there is a heatwave too. So, if you feel that your opponent might

be running Heatwave, just place down your Covenant of Steel and protect Melusine. If you manage to win round 1, you should drypass for round 3. However, if you don't win round 1 and your opponent bleeds you, try defending the bleed with Melusine by reviving her with Sigrdrifa’s Rite.

In round 3, you have a couple of options, depending on how the game went. If the opponent banished either Covenant of Steel or Melusine, pull the one that survived with Sigrdrifa’s Rite or Fucusya. You should aim to protect Sigvald from any potential threat since he is your last round's bread and butter of points. Knut the Callous work well with Sigvald; just make sure that Knut is damaged to 5 points since that will trigger his berserk and refresh his ability every turn. 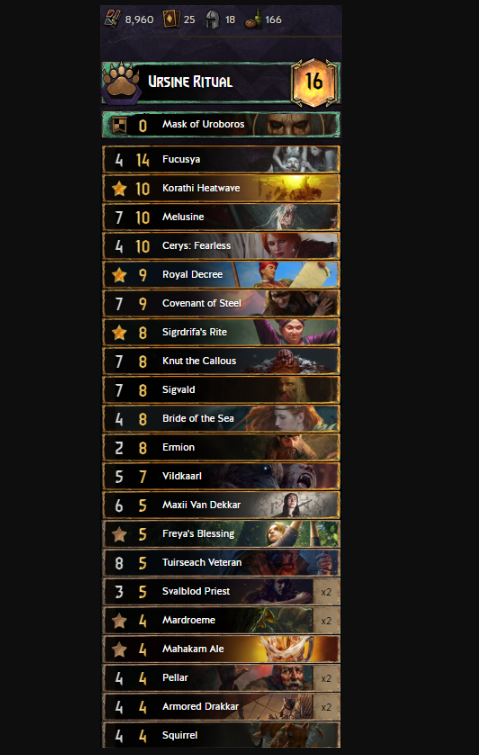 At first glance this list doesn't have a lot of points. However it has our old friend Renfri that still plays for a solid amount of points by herself. Even though you need to run 25 units in order to benefit from Renfri, this list actually has some pretty good consistency with Knickers, Renfri's Gang and Blightmakers. There is Vilgefortz for tall punishment; it can be great against Koshcheys or any other boosted units, for that matter. The list runs 2 Alba Armored Cavalry, which you can make into 3 with Ramon Tyrconell. You should be able to respond to most of your opponent's engines since you will have five locks in total, including your lead ability. If you get to long round 3, try placing your high-based unity on the same row to get the full benefit of Triss: Meteor Shower. Coupled with Ranfri, you can make a solid amount of points in the last round. 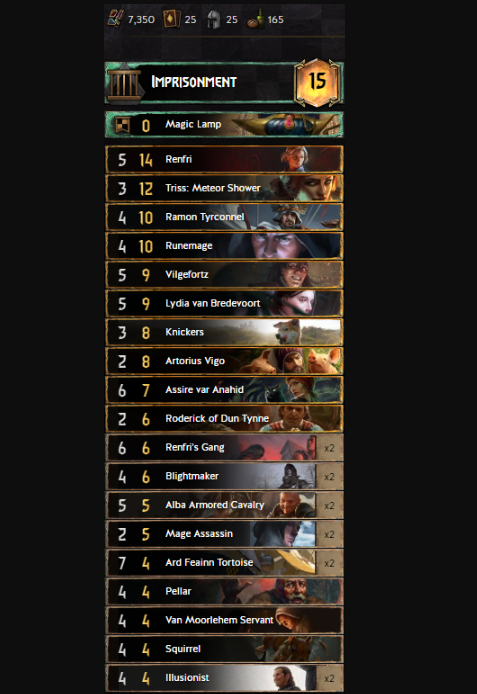 Probably the biggest meme deck of the patch, and of course, it comes from no one other than Nilfgaard. Cultists are the latest addition to the game, well there are Skellige cultists, but they are not as fun as Nilfgaard's. Cultists try to take advantage of The Eternal Eclipse and if left unanswered, they might generate probably the most points out of any other current list. They still have a problem with staying ahead without their golds, but once they get rolling, you won't be able to stop them. They are probably the biggest reason most other decks run a Heatwave. To prevent them from getting huge point swings, you must get rid of their scenario first and try killing Eternal Eclipse Initiate as soon as possible. To successfully play this deck, you need to try setting up your cultists in round 1. Play eternal Eclipse Deacon to give a cultist tag to your gold cards, and Eternal Eclipse Initiate to put pressure on your opponent early. The goal is to try to get to round 3 with most of your gold cultists still in play and scenario, but you can also try to defend bleed with them in round 2. 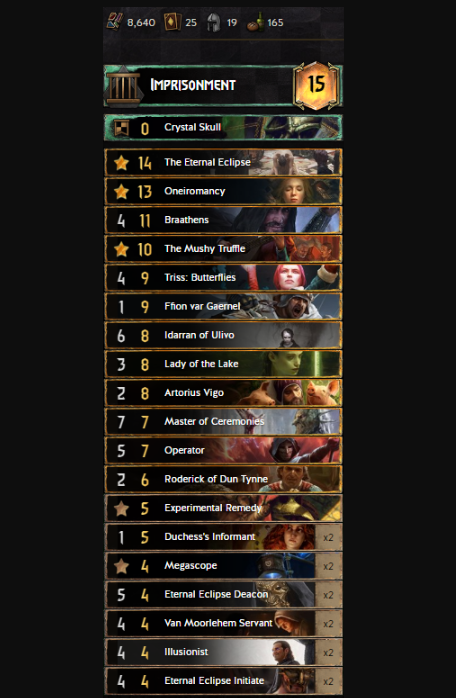