Although it might not feel that way to some, we’re already halfway through the September season of Gwent: The Witcher Card Game. The meta shifted quite a bit compared to what we’d been seeing in August and it’s mostly due to the numerous big changes made to Nilfgaard’s Soldiers archetype. What better time to break down exactly what made Nilfgaard the faction with by far the highest pick rate among the Top 500 players — and why we’ve seen its considerable growth in popularity throughout all ranks. 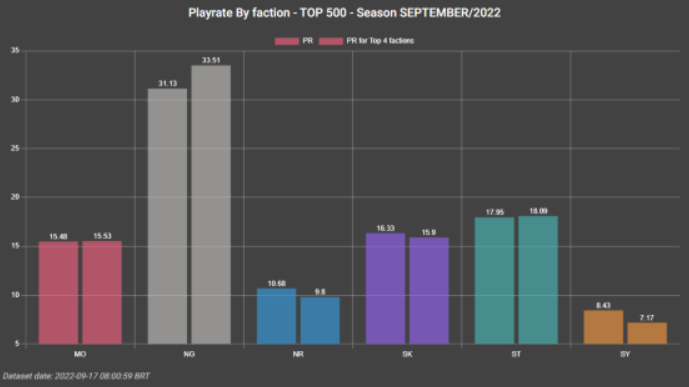 Let’s start by looking at the numbers. The graph above makes it absolutely clear that among the elite 500, the crème de la crème of Gwent, Nilfgaard plays the first fiddle. Its playrate sits at a whopping 31%. If we look at the factions completing the top 3 — Scoia’tael and Skellige — their combined pick rate is 34%, a mere 3% more than what Nilfgaard has on its own. The comparison gets even more ridiculous when we look at other factions. On the top level you’ll be facing Nilfgaard every third match. Northern Realms? Every tenth match.

Things are fortunately better balanced when we examine win rates. Here it’s Syndicate who’s at front, 52% against its name. Nilfgaard only just made it to top 3, its win rate 51.1%. 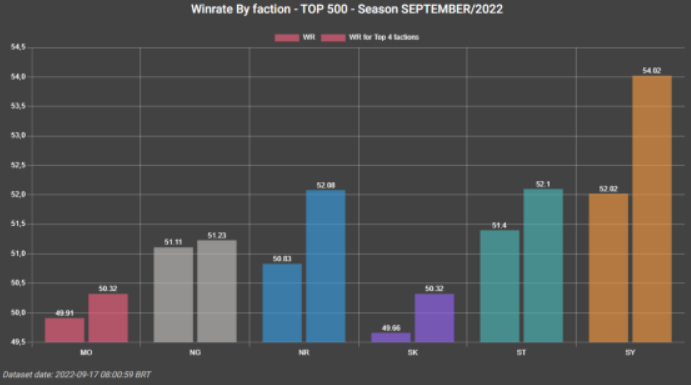 The third important source of information for us are the monthly qualifiers. The Top 16 speaks clearly — Nilfgaard and Syndicate were the only factions that every single participant brought. Here’s a quick summary of what saw play: 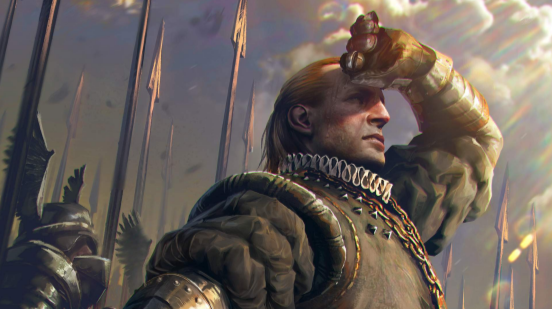 So, what’s the takeaway here? Why does Nilfgaard dominate the ranked ladder, instead of let’s say, Syndicate? Obviously Syndicate’s very strong, which is reflected in its high win rate. But as per usual, it’s not seeing that much play (unless you’re at the tournament level). This is because it has a vastly different style compared to the other factions. Nilfgaard doesn’t suffer from this. Its advantage? Accessibility.

It’s honestly not that hard to pick up a Nilfgaardian deck and be able to maximize its potential after only a few matches. That’s why it’s not that uncommon to run into four or even five Nilfgaard decks in a row when playing at Pro rank. The question that arises is simple — how to balance the scales and prevent NG from overshadowing other factions? The answer might not be all that straight forward.

The core issue lies in overtuned Bronze cards that generate too much value for their low provision cost. What happened is that during the time CDPR was working on the Soldier rework, they severely underestimated possible synergies with the Assimilate package.

To give a demonstration, let’s imagine the following situation:

You’re playing as Nilfgaard, long round 3 against an opponent that lacks any proper control tools — for example Northern Realms Knights — and you have your dream hand. The round is nearing its end and you’re just about to play your two final cards — Slave Driver and Steffan Skellen. On your side of the board there are four Assimilate units, Nauzica Sergeant, double Hefty Helge (thanks to Letho) and Syanna.

The Slave Driver targets your Sergeant who has armor, so no points lost there. It plays a 1-power copy of it which gets you 7 points and 2 armor. Slave Driver himself plays for 4 points. You just played two cards that weren’t in your starting deck - copy of the Sergeant and the Battle Preparation he spawned, so each of your Assimilate units grows by 2 points - 8 in total. Furthermore, Battle Prep is a Tactic, so both your Helges gain a charge, giving you effective 4 points worth of removal. You’ve just played a 5 provision Bronze unit for a total sum of 23 points. Not too shabby.

Now, let’s take it even further and look at what Skellen does if you trigger Syanna’s order and have 12 (the maximum possible) tactics in your deck. He plays for 5 points, spawns 8 Aces, each worth 2 points and an extra charge to Helge, while also accumulating Assimilate value. That makes him play for gargantuan 85 points. This is of course a scenario that’s nearly unachievable against most decks and requires quite a bit of luck from the RNG gods to give you all the right cards, but it serves us well to demonstrate how powerful the freshly reworked cards are, especially when they synergize with the Assimilate units. 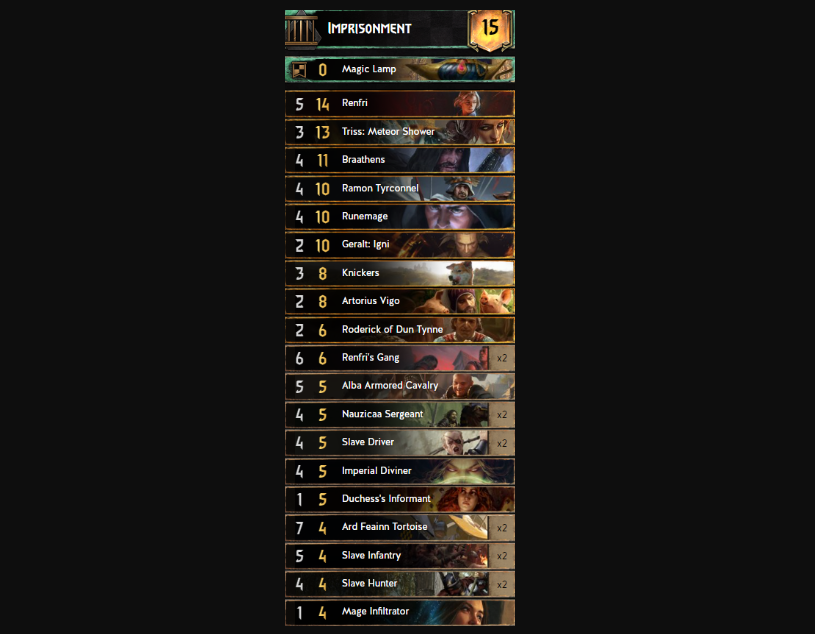 On the right, we can take a look at how a typical Nilfgaard Assimilate/Soldiers hybrid deck looks like. If you’ve been playing this season, it’s highly possible you’ve already encountered something similar. This particular list was brought by TLG_Pajabol to the Top 16 qualifiers. The goal with this kind of deck is mostly to use the leader charges quite early, go for Renfri, pick ideally the Blessing of Kindness to have the extra value for the rest of the match and then just play like a standard Assimilate deck, the only exception being that you play all your units on one row to maximize Triss: Meteor Shower value.

When you look at the bronze units on that list, for obvious reasons you can spot two Slave Drivers, as well as two Nauzicaa Sergeants. Their deadly synergy efficiently accumulates plenty of points, no matter if you find yourself in a short or a long round 3. Another strong Bronze, that Pajabol (and many others) included, is Slave Infantry. It’s a four provision card that can play for 9 points on deploy which in itself is already great for its cost, however in this deck it also comes with an added benefit — it helps getting more value from your Triss.

Hopefully in the next patch CD Projekt Red manages to tweak these cards accordingly. It’s important not to be too harsh with the nerfs, because that could put Soldiers back to their previous underwhelming state, however there definitely has to be a balancing patch with a few smaller nerfs and tweaks, to ensure that the game’s fair and fun for players of all skill levels. Having Bronze cards, that can outshine many Gold ones, goes directly against the basic rules of Gwent and is an issue that should be addressed as soon as possible.