A brand new expansion titled Chronicles approaches and, as usual, CD Projekt Red decided to share with the community what they’ve been working on in advance. In this article, we’ll go through the newly announced cards that will join the ranks of Northern Realms, discuss potential strategies and try to evaluate whether they’re going to make ripples on the surface of the meta or they’re about to sink like a stone and be never seen again. Before we get into that, though, please remember that some of the values might change a bit before the update’s release on October 4th.

Guess who’s back? It’s the Crinfrid Reavers: a notorious group of mercenaries famous for hunting dragons and draconids. Sapkowski’s readers will recognize them from the short story The Bounds of Reason, where they participated in the unsuccessful dragon hunt. Others might know them thanks to their brief appearance in The Witcher 2: Assassins of Kings. The Gwent veterans have been familiar with them since Gwent Beta. So, what do these battle-hardened warriors bring to the table this time?

Read more: In the shadow of the Great Sun - How Nilfgaard dominates the meta 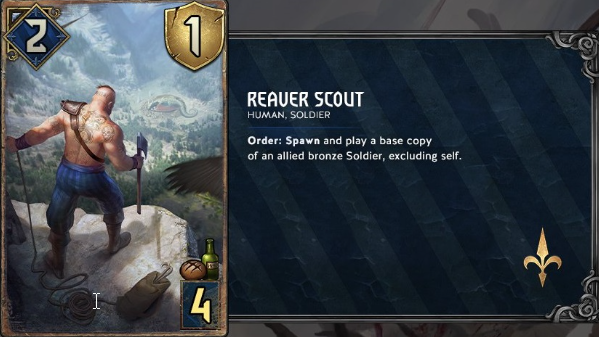 The scout seems to be an excellent four-provision Bronze, his order ability being a slightly more limited version of Reinforcements - a six-provision card that lets you play a copy of a bronze unit. However, I’m afraid of how this card will perform when facing Nilfgaard Assimilate. Nilfgaard’s pool of Soldiers is really strong now, and a combo that immediately came into my mind after seeing this card’s reveal is fairly simple - copy the Reaver Scout with Duchess’s Informant, use him to play Nauzicaa Sergeant, and then follow up with Slave Driver on the Scout for yet another Sergeant. We’ll see how things play out; thankfully, his ability is Order, not a Deploy, so there’s the opportunity to prevent such strong combos if you’re running enough control. 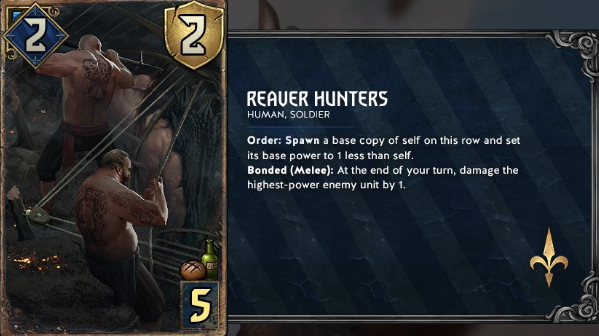 The second addition to the Bronze pool is the Reaver Hunters. At first glance, playing a five-provision card for minuscule two points may seem a bit underwhelming, but the Hunters might prove to be a glass cannon if used right. On the melee row, the Reaver Hunter can suddenly become a two-point-per-turn engine. When paired with cards like Viraxas, Reinforcements, or Reaver Scout, there might suddenly appear way more Hunters than what your opponent can handle. An interesting card and a strong addition to the Northern Realms Soldiers roster. 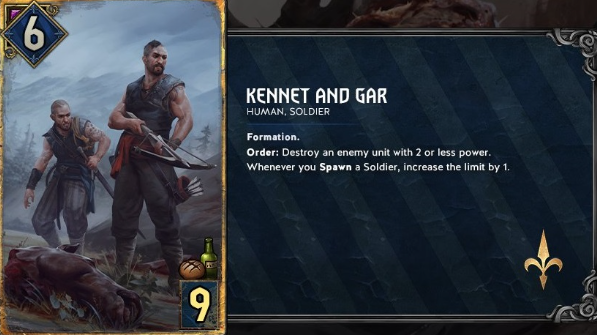 The first of the two Gold cards we’re getting, Kennet and Gar, introduces an intriguing concept. It’s a nine-provision card that plays for eight points if you’re conservative. But if you’re bold enough, its value can be significantly increased with each Soldier spawned (note: the effect only applies when the card is on the board, not in your hand or deck). This not only promotes the play of the other Reaver cards but also nicely synergizes with the freshly reworked Garrison (Deploy: Spawn and play a base copy of a bronze Soldier from your starting deck).

As I said, it’s a fascinating concept, having a card that grows more powerful the longer it is on the board, because at the same time, you’re also risking a potential lock or removal that could lose you quite a few points. It reminds me of how Mages with Patience values work, an archetype I really enjoy. 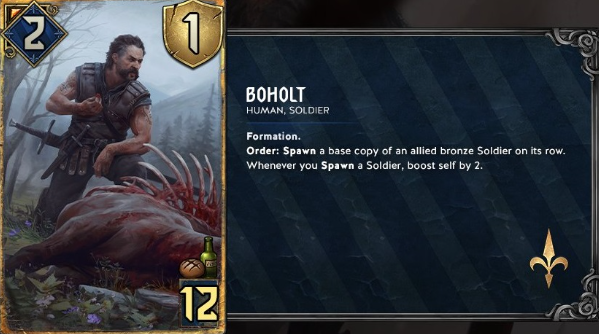 And finally - Boholt, the leader of the bunch. Two points and one armor for twelve provisions might not seem that impressive, but Boholt has plenty of tricks up his sleeve. He’s got Formation, meaning you can use his Order right away if you want to. He’s also got a very strong passive that allows him to boost by two points for each Soldier spawned, something that you’ll be doing a lot when playing Reavers.

That’s the big question that is hanging in the air right now. The leader ability I’d opt for is Inspired Zeal; however, something tells me Mobilization could work even better in some scenarios. Some cards that you might combine Reavers with include Queen Adalia, Viraxas, Garrison and Reinforcements. I think we might also see players experimenting with Kerack Frigate, Kaedweni Revenants or Immortal Cavalry.