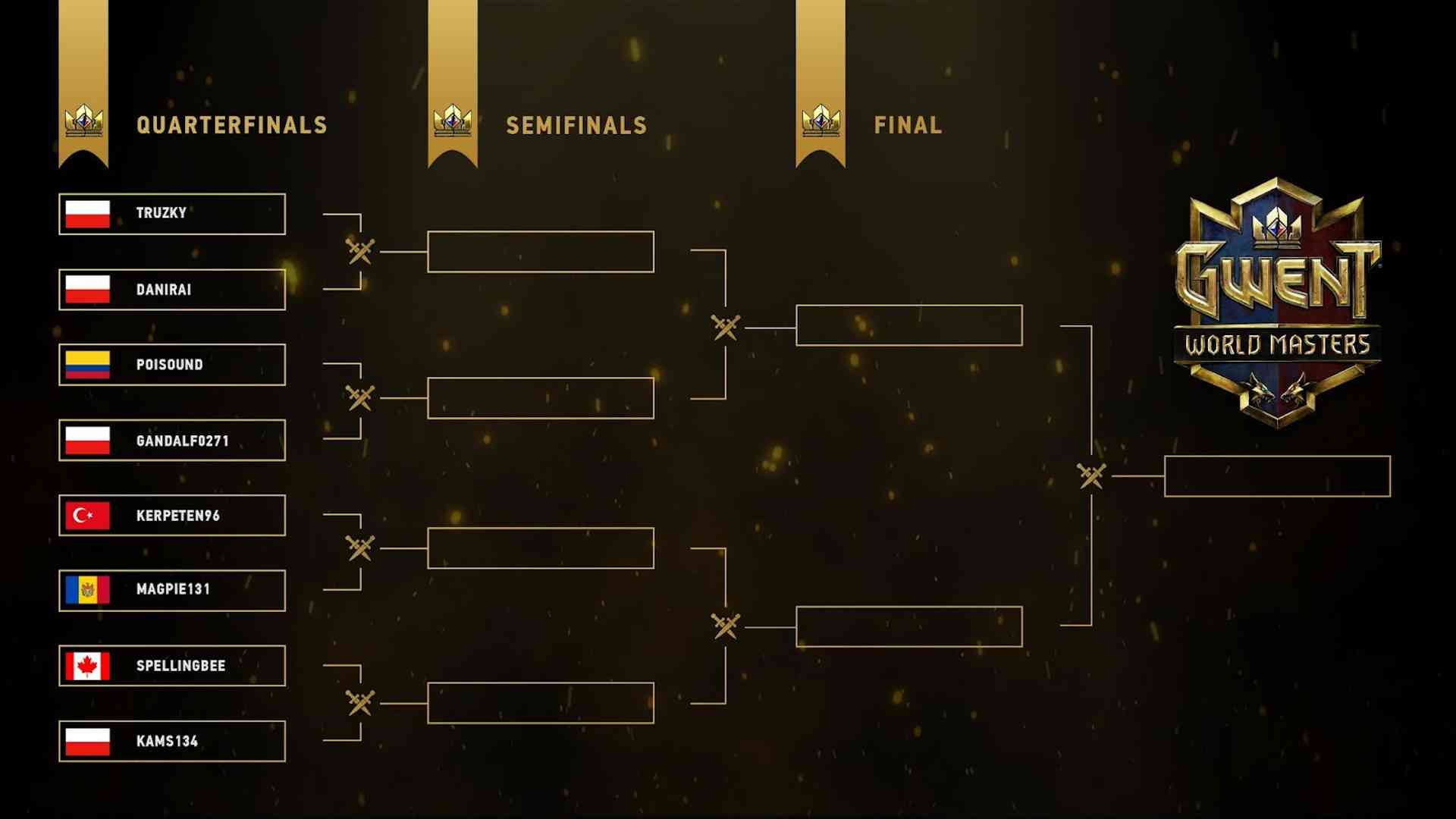 The first December weekend is upon us, and with it, the most anticipated Gwent tournament of the year - the World Masters. And that means not only two days of intense competitive matches between eight of Gwent’s best players, but also the highly anticipated announcement of the 2023 roadmap, the reveals of 12 new cards, and, of course, the patch notes for the new update. For now, though, let’s focus on the action that Day 1 brought us.

The format of the World Masters is very straightforward. The eight players who qualified for the tournament throughout the year are first facing off in the quarterfinals to determine the top 4 who will move on to the semis and the highly anticipated final on Day 2. Each of the players brings four decks from four different factions. Before the match starts, the players are allowed to ban one of the decks their opponent brought to the table. Then the action starts. To make it even more interesting, when a player wins a match, the deck they used is locked from them for the rest of the series. The first player to win three matches moves to the semi-finals. 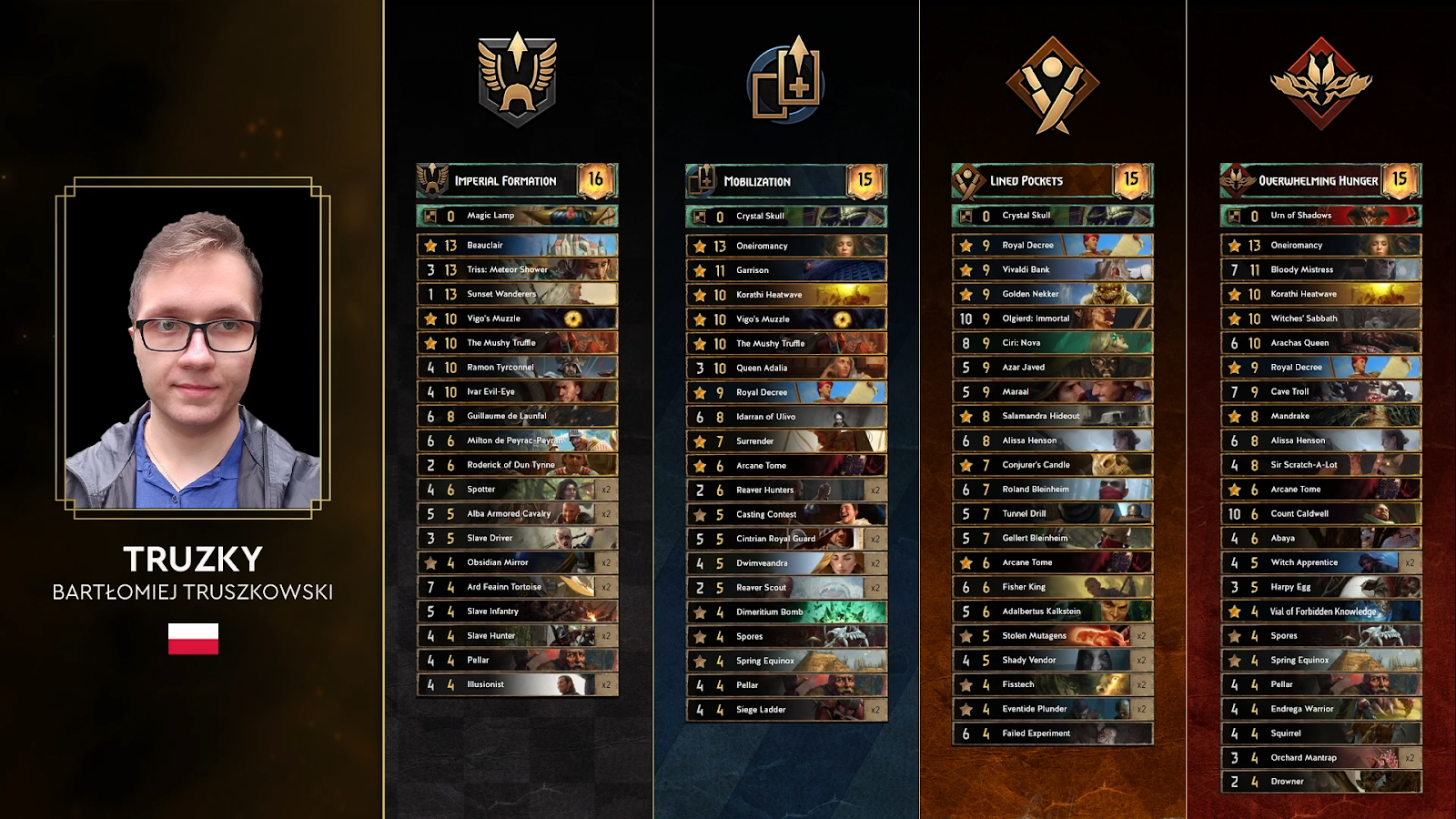 The first bracket saw a Polish duo, Truzky, and Danirai. Being good friends, they weren’t thrilled to be in a situation like this, but they both went into the match focused solely on winning. Truzky brought a pretty interesting line-up of decks. While both his Golden Nekker Syndicate list and his Northern Realms Mobilization were fairly standard, his Nilfgaard list was quite a surprise. Instead of Imprisonment or Double Cross list revolving around Renfri, he opted for Imperial Formation with Beaclair, Vigo’s Muzzle, and Mushy Truffle. He was also very adventurous with his Monsters deck. It was anything but the typical Deathwish Overwhelming Hunger we were used to. With Arachas Queen, Bloody Mistress, Sir Scratch-a-Lot, and Witches Sabbath, he was obviously aiming to maximize the potential of both Deathwish and Thrive units.

Danirai was less experimental and stuck with more conservative decks. His Skellige Pirates and Syndicate Poison being Golden Nekker lists, his Nilfgaard list was the standard Imprisonment that haunts all Gwent players for the last two months. The most interesting deck he showed was definitely the Scoia’tael Precision Strike with the infamous Vanadain + Simlas combo aided by Madoc and a few bombs.

The match kicked off with Syndicate mirror match, Truzky starting from the blue coin, and Danirai on red. And while it initially looked good for Truzky, the key moment came during the first round when Danirai purified Truzky’s resilient Ciri and took the round by a singular point after Truzky passed. Sensing it was the right time to bleed, Danirai used the tempo of his own Ciri and built up a huge point gap despite being a card down. Feeling this might be the right moment, the bleed suddenly changed into a 2-0 push which ultimately proved successful. 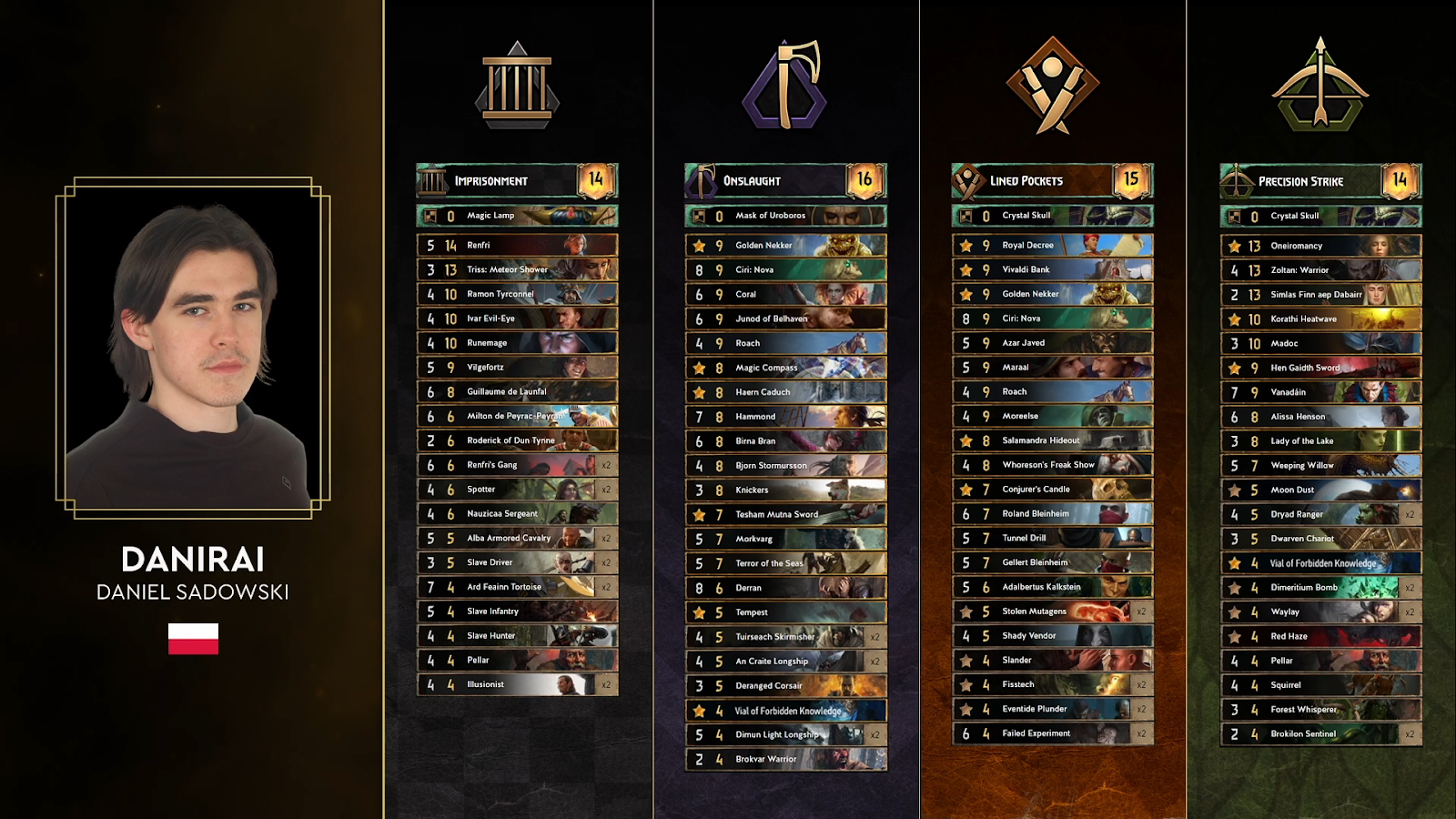 The second match had Danirai on blue with his Skellige list against Truzky’s unconventional Monsters and it was a pleasure to watch. It all came down to a long round 3 with Truzky being in a great position, having an extra card over Dani. However, what Danirai managed to pull off was completely unexpected. Knowing that Truzky was aiming to use Witches Sabbath to resurrect units from the graveyard, he used his Magic Compass to play Lippy, swapping his empty deck with his graveyard, effectively making Truzky’s Sabbath tactics completely worthless which allowed him to win the round and secure a 2 point lead in the series as well as a big psychological advantage.

The third match was a face-off between Truzky’s Monsters list and Danirai’s Nilfgaard Imprisonment which resulted in a swift 2-0 victory for Danirai who took the series by storm, winning 3-0. 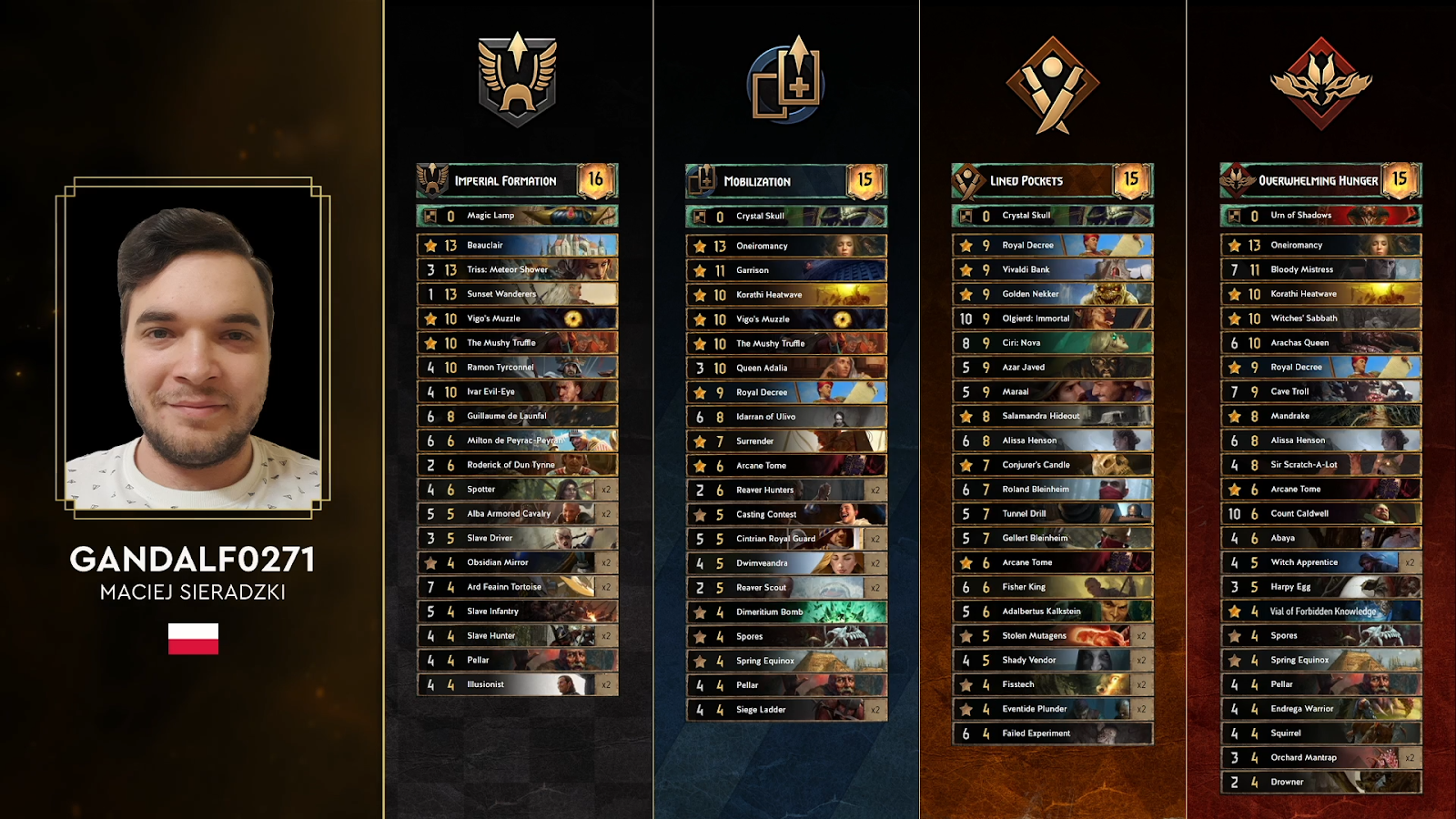 Poisound and Gandalf0271 met in the second bracket. Gandalf, being Truzky’s teammate, brought the same decks he did. Poisound arrived with decks we already know well as they have been on the ladder for quite some time now - he brought the Nilfgaard Imprisonment, Northern Realms Mobilization Reavers list, Golden Nekker Syndicate Poison, and Deadeye Ambush Scoia’tael.

Coming into the first game, we saw Reavers mirror. Poisound, however, having the significant advantage of the blue coin in this match-up, managed to set up his removal engines first and secured round control by winning round one.

This put Gandalf in a tough position, yet he ultimately defended round two. But it was Poisound who emerged victorious from this mirror match when instead of playing Reaver spam, he focused on spawning as many Cintrian Royal Guards as he could in round three and outscored Gandalf. 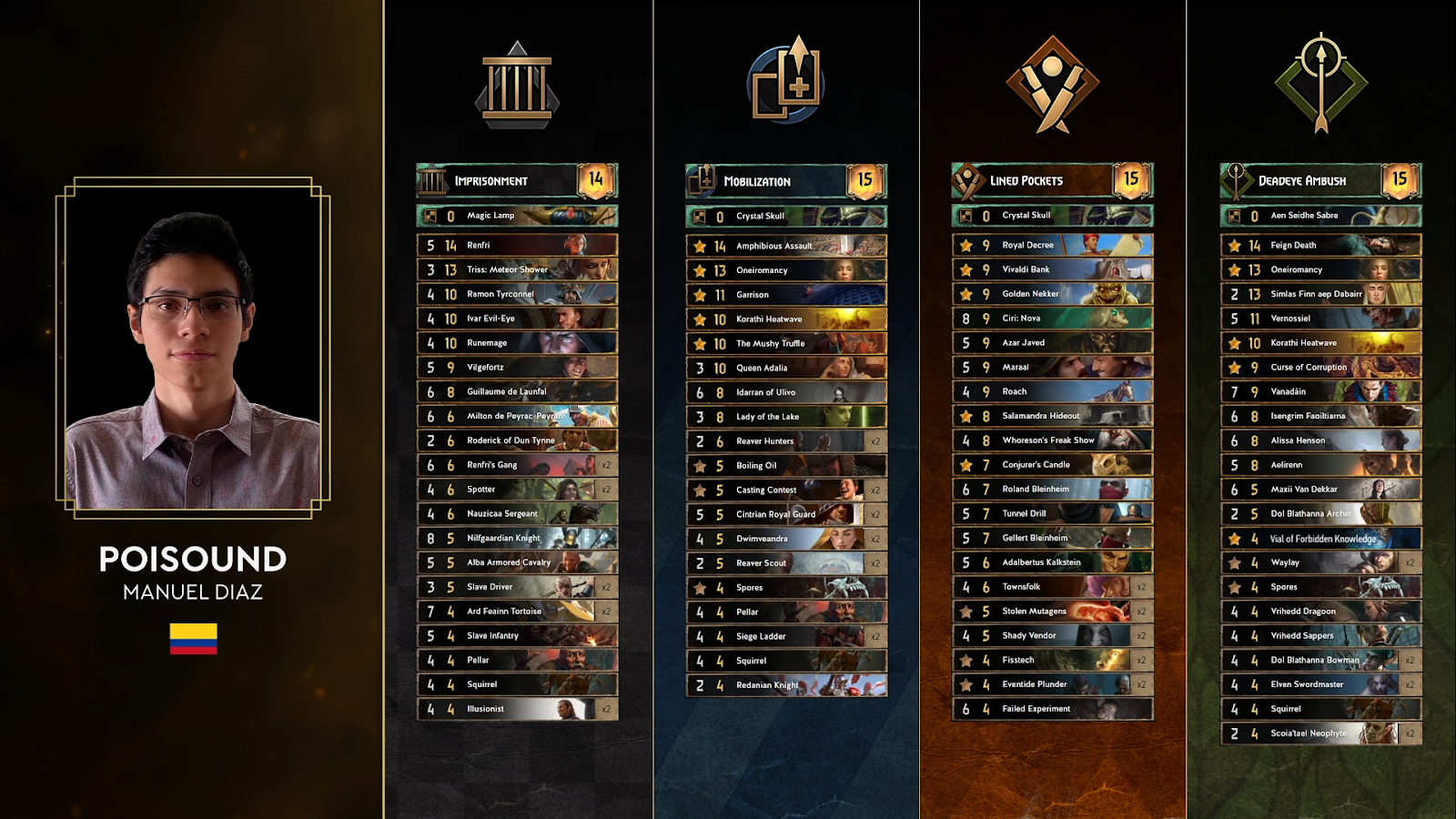 But Gandalf definitely didn’t get disheartened, managed to get his Reavers through by beating Poisound’s Nilfgaard, and then got himself into the lead by beating the Imprisonment again, this time with his Syndicate list by a singular point. Interestingly, the Overwhelming Hunger list that both Truzky and Gandalf brought, proved to be the decisive factor in this series, as it was no match for both the Deadeye Ambush and Imprisonment decks and at the end of the day it was Poisound who got himself the spot in the semi-finals. 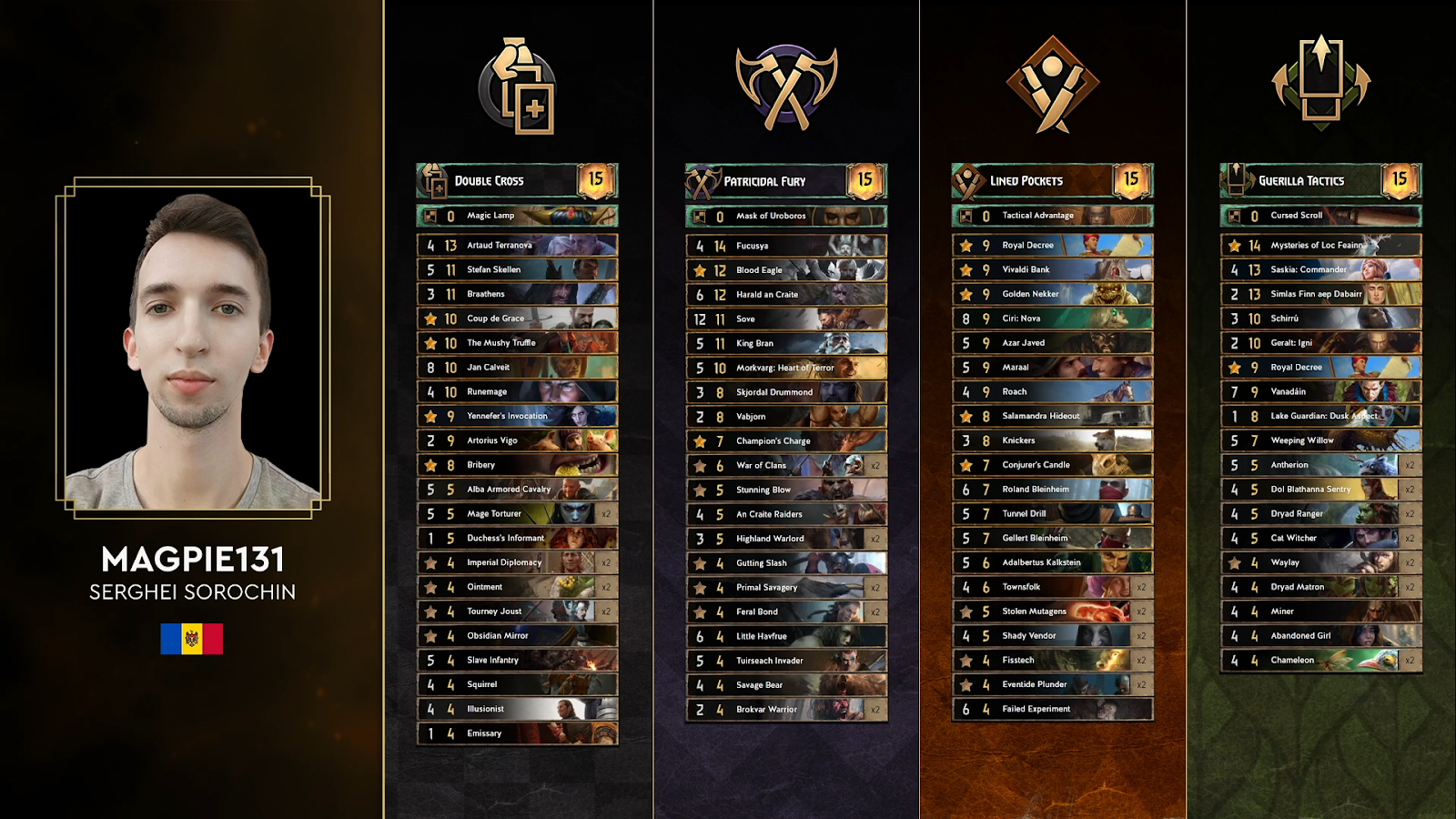 The third game of the day was a clash of titans as Kerpeten96 and magpie131 were both often mentioned as the top contenders for the win. Magpie showed up with two fairly standard decks, those being the Syndicate Poison list and the Skellige Raids with Sove thrown into the mix. The more interesting stuff was his Nilfgaard and Scoia’tael. His ST list was the well-known Harmony - Movement hybrid, however this time with a twist - including Schirrú. The Nilfgaard deck he brought was a Double Cross list with plenty of Tactics included. This allowed him to include Stefan Skellen, not only as an additional control card, but his Aces also having the potential to boost your Assimilate units. And, of course, Jan Calveit for improved consistency. 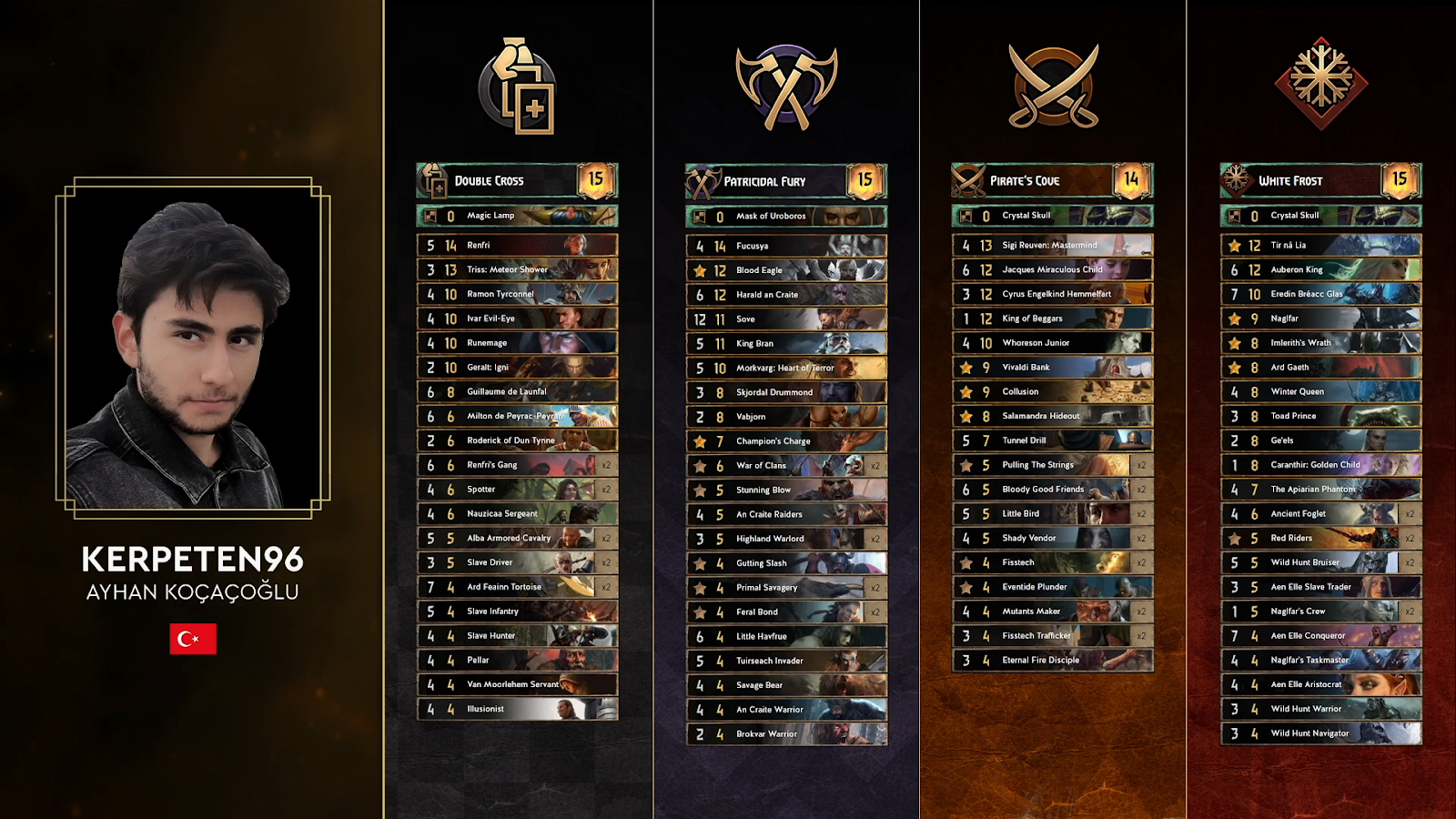 Game 3 opened with Kerpeten on the blue coin with his Skellige list facing Magpie’s Nilfgaard. Kerpeten managed to take the first round, opted for a dry pass in round two, and decided to go into long round three. This opened quite a few possibilities for both players. Magpie demonstrated the beauty of Assimilate when he played his own Sove and Fucusya, but in the end, it was Kerpeten who won the first match only by a few points, mostly thanks to the advantage of having the last say. Magpie responded by taking the next match when he beat Kerpeten’s Double Cross with his Golden Nekker SY. Kerpeten’s response was very strong though, he got his second victory in a tight three-round battle with his Pirate’s Cove against magpie’s Assimilate and followed up with a third victory with his Nilfgaard against Magpie’s Scoia’tael, taking the series and winning 3-1. 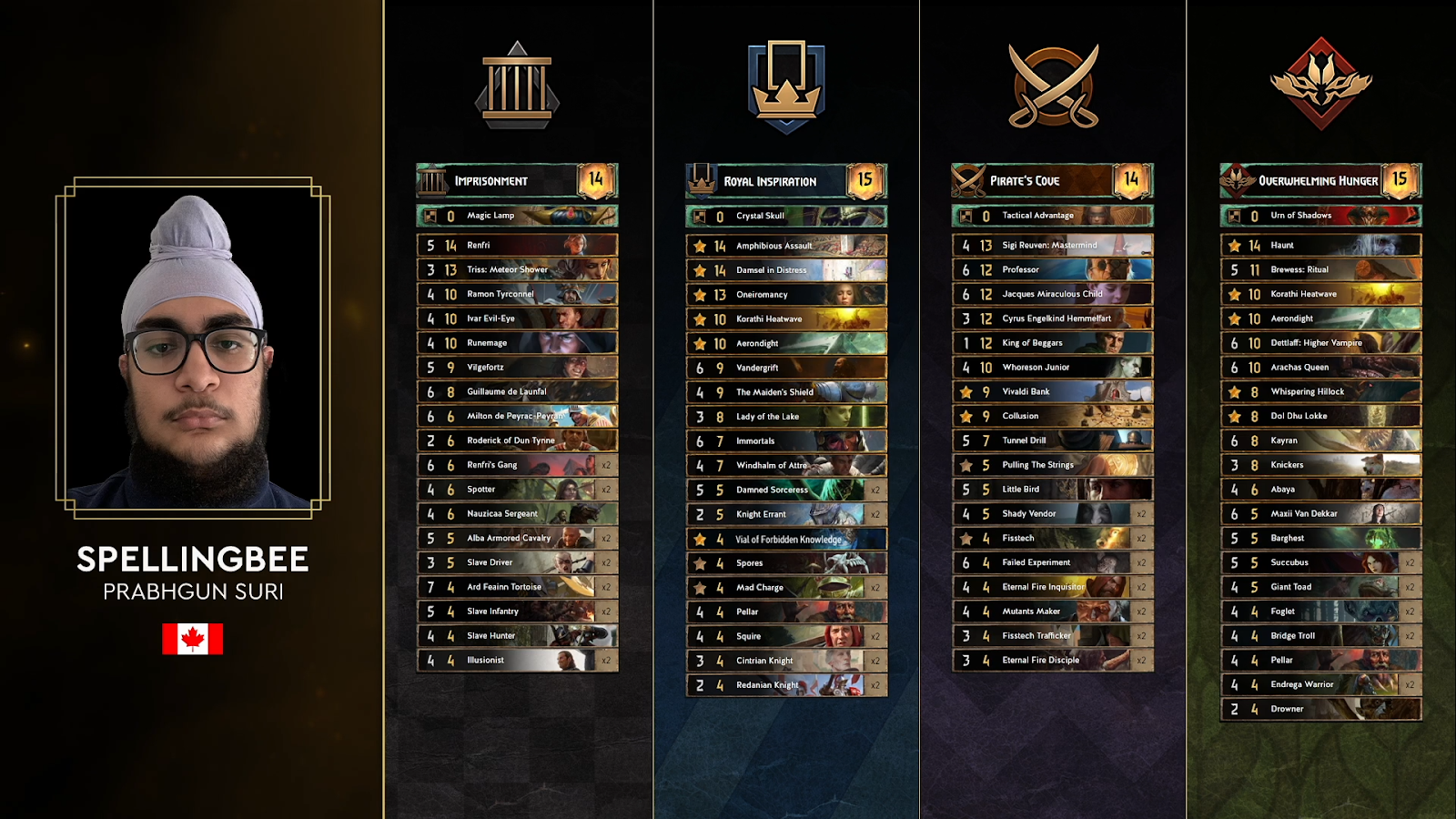 The last match-up of the day was between Kams134 and Spellingbee and it had some of the most entertaining plays of the day. Spellingbee came packing a quartet of very strong decks. He brought the well-known NG Imprisonment Renfri and Syndicate Pirate’s Cove. Surprisingly, he was the only one who included NR Knights in his top picks, a deck that really shines now, when Geralt: Yrden was significantly nerfed. Finally, his last choice was Monsters with the Overwhelming Hunger leader. However, not the list that Truzky and Gandalf failed to get through, Bee instead chose the Brewess: Ritual Deathwish deck with Scenario.

Kams was slightly more experimental in his approach. Other than the obvious NG Imprisonment and SY Lined Pockets Nekker list, he also included Golden Nekker SK Pirates and the ST Precision Strike with Madoc we’ve seen earlier from Danirai.

In the first match, Bee had the advantage of the blue coin, so he immediately decided to use his NR Knights who benefit a lot from it due to the inclusion of Aerondight. Kams responded with his Scoia’tael list. He went in aggressively, won the first round even after committing his leader, and then went for aggressive bleed in round 2. Ultimately, Spellingbee remained calm, didn’t get pushed into using his scenario in round two, and thanks to that gamble he was able to take round three and got into the lead. 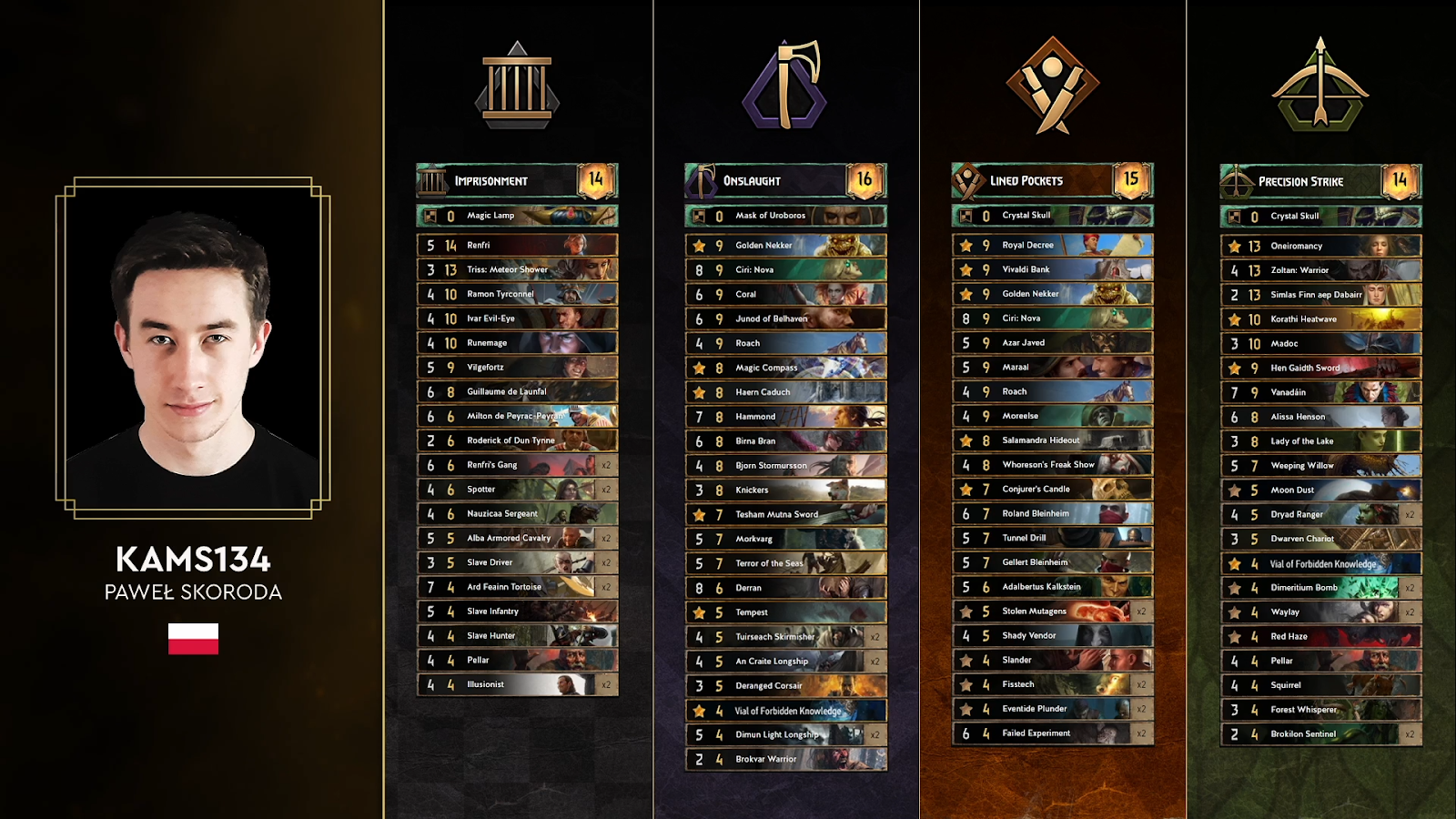 Kams responded by taking the next game for himself. He masterfully used the potential of his Skellige list against Bee’s Syndicate which struggled to keep any units alive and in the end only relied on a strong Sigi finisher that wasn’t enough to close the big point gap. The next game saw one of the key moments. Bee with his MO Deathwish on blue, facing Kams’ SY Poison. And while it looked for a moment that Kams had the advantage, Spellingbee played his immune Kayran brilliantly and suddenly all the poison Kams had was useless, allowing Bee to get back into the lead. And while Kams fought back and won the Syndicate vs. Syndicate match, in the end, it was Spellingbee and his Sigi that won the deciding match against Kam’s Scoia’tael and moved to the semi-finals after winning 3-2.

Keep your eyes on BLIX.GG as we continue to recap the Gwent World Masters 2022!