October is upon us and as the nights grow longer and the days get ever shorter, you can feel that Spooky Season is approaching. Halloween is celebrated on the 31st of October and as a Counter-Strike fan there is no better way to honour such an occasion than getting some new skins, theming your inventory and embracing the creepy atmosphere. Below are some skins to fill up your Halloween themed inventory, that may or may not scare away your opponents!

The AK-47 | Nightwish was added in January of 2021 as part of the Dreams & Nightmares Collection. Fittingly, this AK-47 finish is incredibly nightmarish. The focal point of the gun adorns a monster's head with glowing eyes and a jaw full of sharp teeth. 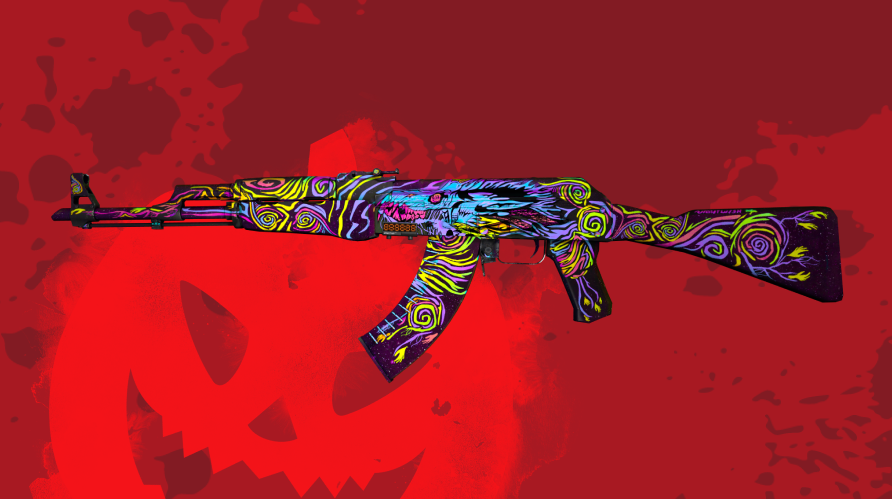 The freakish beast is surrounded by lots of vibrant colours and spirals and swirls and this gives the skin a psychedelic effect - adding to the surreal nature of the artwork. 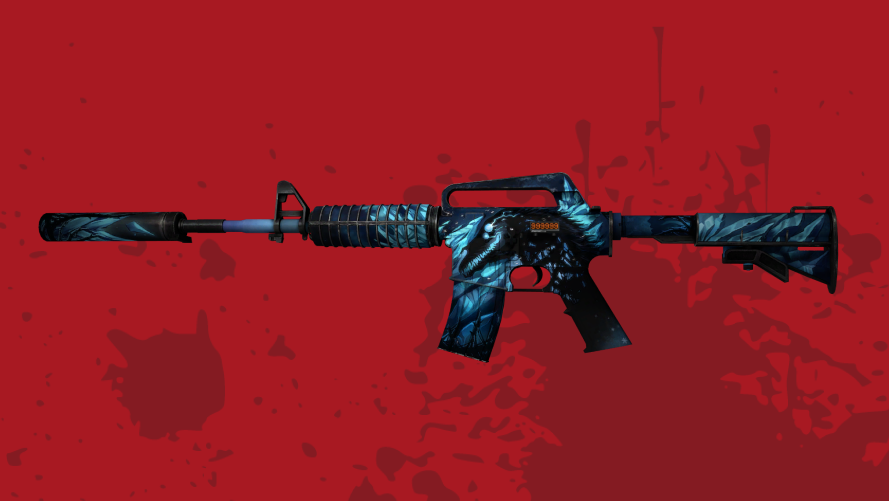 The main colour scheme of the Nightmare is black and blue with the main body of a rifle featuring the head of a demon which resembles a horse. The demon featured on the M4A1-S | Nightmare is frightening and can create nightmares to all that see it, hence the name.

Read more: What if we change CS:GO’s overtime system?

Currently the M4A4 is the lesser used of the CT rifles but for all that still use it, the best skin for you is the M4A4 | Tooth Fairy. The body of the weapon is painted in dull shades of red and green. The central part of the rifle features an incredibly creepy image of the Tooth Fairy who is seen clasping onto a human tooth. There are also other human teeth scattered across the design. 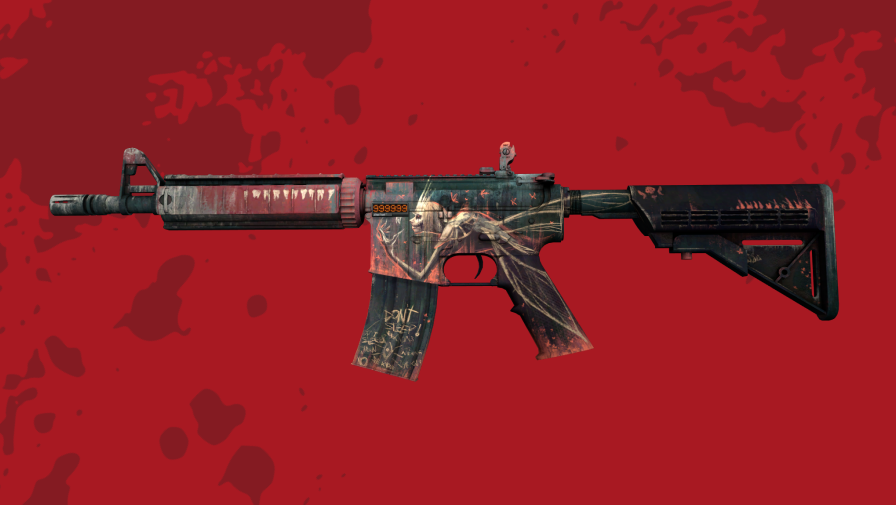 The magazine has various handwritten inscriptions on it, with the main one being “Don’t Sleep!”. The M4A4 | Tooth Fairy was introduced in the Fracture Collection in 2020 and would be a great addition to a horror themed skin collection.

From a newer skin in the AK-47 | Nightwish, to a skin much older — the Galil AR | Cerberus was added to the game in the Summer of 2014 as part of the Cache Collection. The prominent colours on the main body of the Galil AR | Cerberus are neon yellow and green, this is complemented by radiation hazard signs indicative of nuclear fallout and devastation. 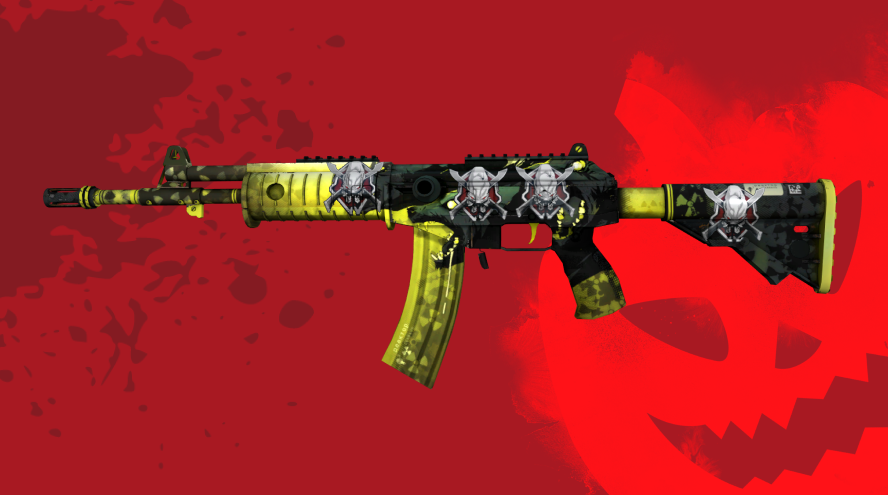 The main body of the rifle contains an image of a three-headed Cerberus, with glowing eyes and sharp teeth. In Greek mythology, Cerberus is known as the hound of Hades (the God of the Dead) and their role was to guard the gates to the Underworld. Having this ancient beast on your gun is sure to scare off your opponents.

The FAMAS | Eye of Athena was added to the game in Summer of 2018 and was part of The Horizon Collection alongside the previously mentioned M4A1-S | Nightmare. The Eye of Athena finish features an image of an owl with feathers of various colours - red, orange, yellow and brown. The fear factor comes from the eyes which stare deep into the eyes of the user, one of which is mechanised. The FAMAS | Eye of Athena is spine-chilling and is perfect to provide that eerie, sinister vibe. 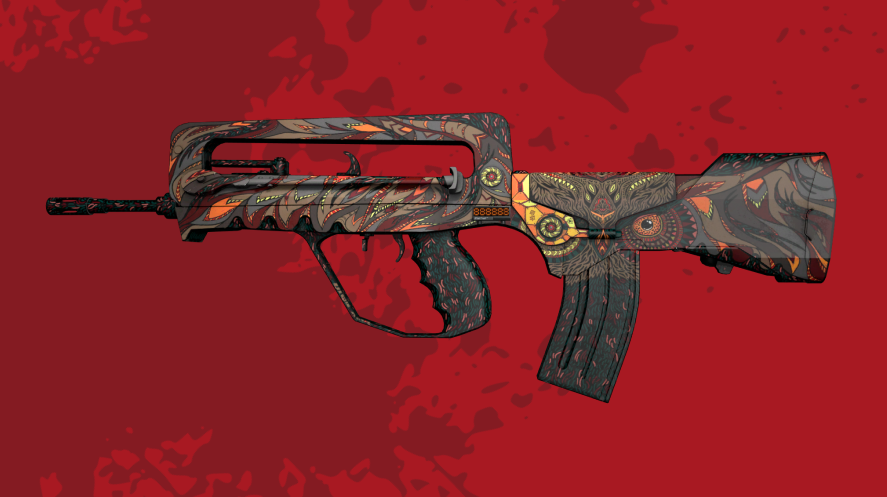 The AWP | Containment Breach is bright neon green adorned with the image of a forest, full of radiation and toxic green gas. Throughout the main body of the Sniper Rifle there are leafless trees and demonic monsters filling the forest. The monsters have their mouths wide open and look as if they are hunting with bared teeth and piercing luminous eyes. 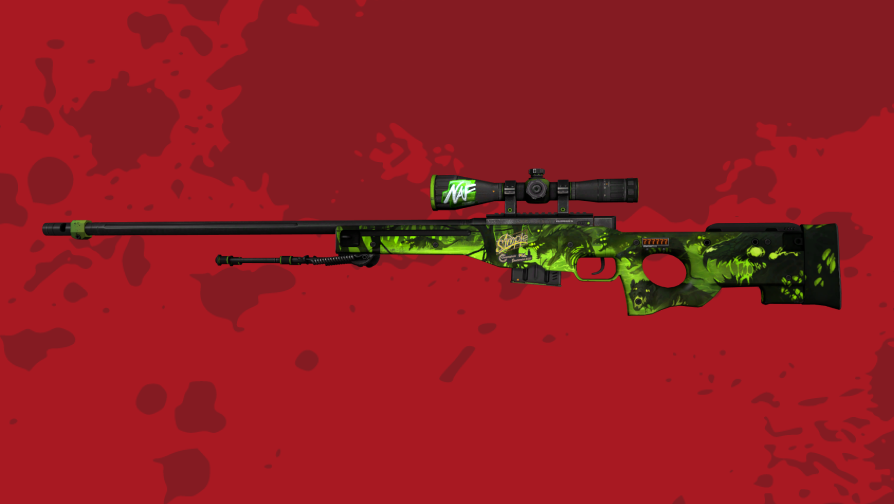 The AWP | Containment Breach was added to Counter-Strike: Global Offensive in November of 2019 as part of The Shattered Web Collection, which was released alongside the start of Operation Shattered Web.

The SSG 08 | Bloodshot, alongside AWP | Containment Breach was added to the game as part of The Shattered Web Collection. The Bloodshot again features a monster. The main body of the sniper features a one-eyed creature with its mouth wide open and a winding tongue protruding out of it. The SSG 08 | Bloodshot features vibrant colours, some cartoon bones and flames surrounding the monster that create a beautiful image that embodies the Halloween theme. 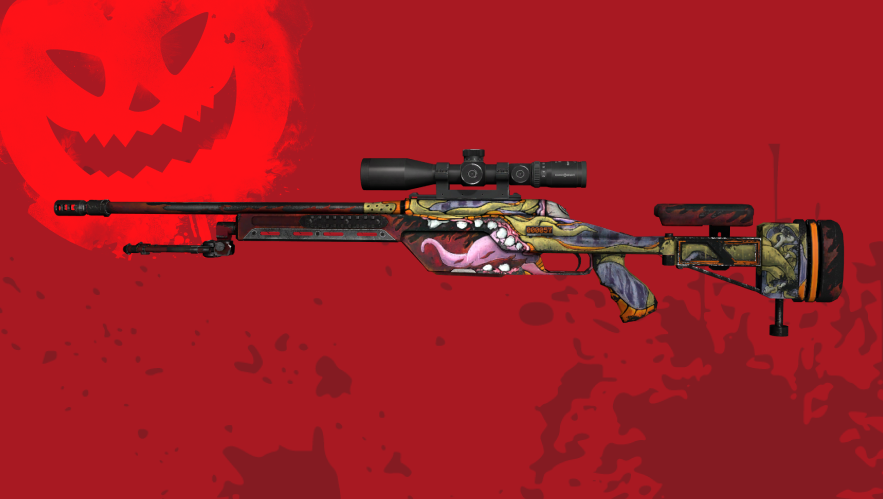 The Glock-18 | Wasteland Rebel as a weapon finish is artificially aged and looks second-hand, as if it was used by a soldier before. The black body of the pistol features a ceramic pattern on the shutter which adds to the aged effect. Across the Wasteland Rebel, there is an white inscription added via graffiti which states “KILL THEM ALL”. 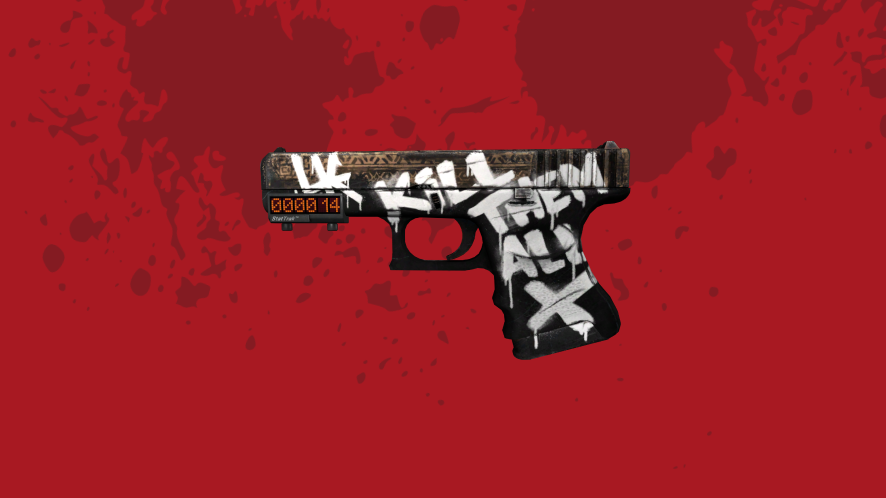 This message is hair-raising and slightly disturbing which fits the theme of this skin collection. The Glock-18 | Wasteland Rebel was added in June of 2016 as part of the Gamma Collection and belongs in an inventory of this kind.

The USP-S | Kill Confirmed is one of the most popular USP-S skins in the game and also works in a Halloween themed inventory. The Kill Confirmed skin was added in the Shadow Case in 2015 and features the main colours of red and black. 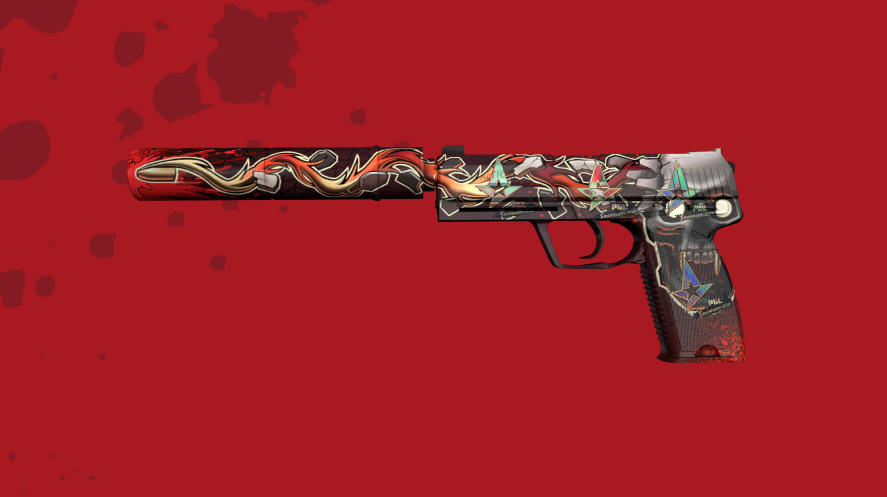 The USP-S | Kill Confirmed contains a grey skull being shattered by a bullet. The bullet leaves a fiery trace and causes blood splatter and shards of bone flying from the skull. This USP-S skin is blood-curdling and portrays a rather disturbing image - perfect for such an inventory. 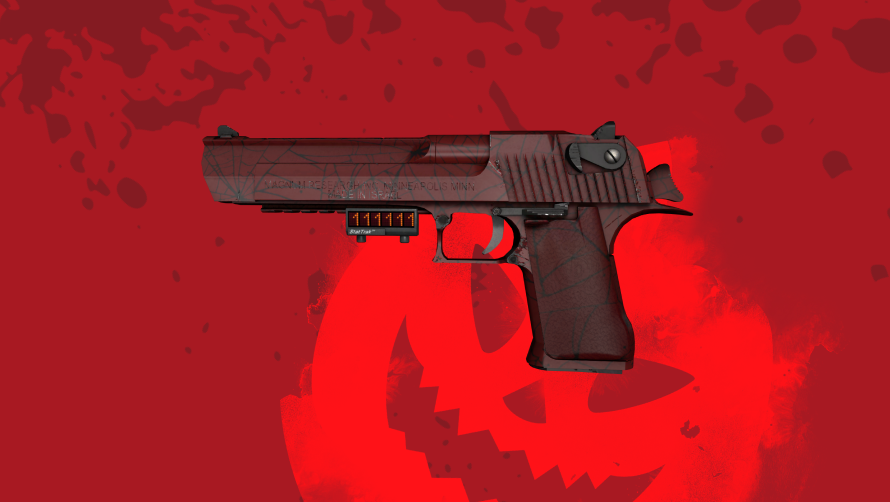 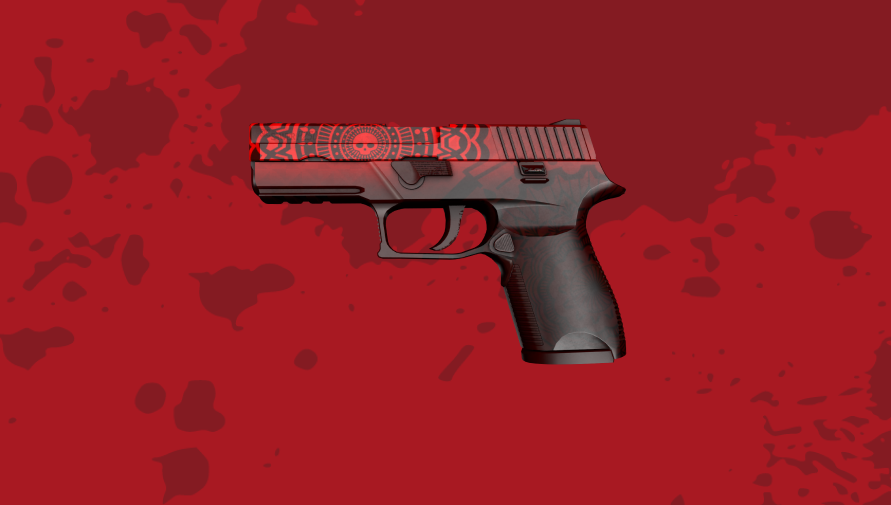 The body of the P250 is a deep blood red, features black spiral patterns and a skull to round out the weapon finish. The P250 | Muertos was added to the game through The Chroma Collection in 2015. Muertos is a Spanish word and it translates to Dead, which further solidifies the chilling nature of the weapon finish.