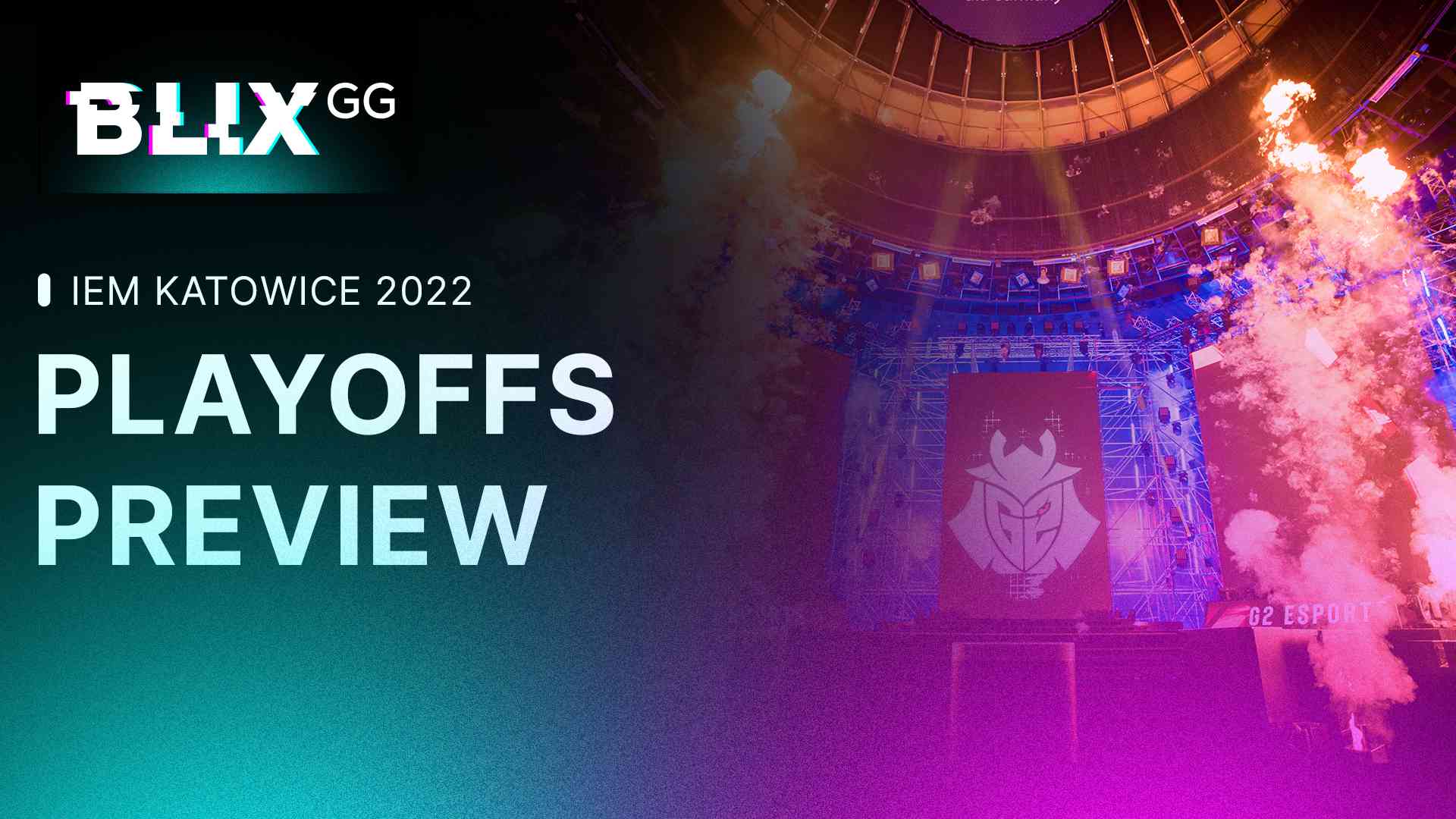 Before the playoffs, we, here at BLIX.GG, have created a bingo card that contains specific events that may or may not occur throughout the playoffs. Feel free to play along at home. Do you think we will get bingo?

The group stage of IEM Katowice 2022 concluded just a few days ago. Emerging from the group stage are the six remaining teams who will fight tooth and nail for the trophy inside the iconic Spodek Arena. The playoffs of IEM Katowice will mark the highly anticipated return to crowded LAN arenas - since their brief return in Copenhagen for the BLAST Premier Fall Finals in the latter stages of 2021.

Katowice is one of the most storied cities on the Counter-Strike calendar - with an event dating back as early as 2013 where Wiktor “TaZ” Wojtas and other Polish legends took home a $7,000 prize. Since then, the tournaments have continued to grow and grow, producing magical moments along the way. IEM Katowice 2022 will be the first time since 2019 that fans have echoed throughout the Spodek Arena; the atmosphere will be electric.

Despite not always being a Major tournament, Katowice remains one of the year's largest and most important events. The entire Counter-Strike world is waiting on the edge of their seats to find out who will lift the elusive IEM Katowice trophy in 2022.

Dzhami “Jame” Ali’s men entered IEM Katowice fresh off of a dominant performance at ESL Challenger February 2022, where they won the event without dropping a single map. Despite the lesser competition, the level displayed by key players such as Mareks “YEKINDAR” Gaļinskis and newcomer Evgeniy “FL1T” Lebedev was sensational. YEKINDAR continued this stellar form, beginning the competition with three aces in his opening series against Copenhagen Flames. 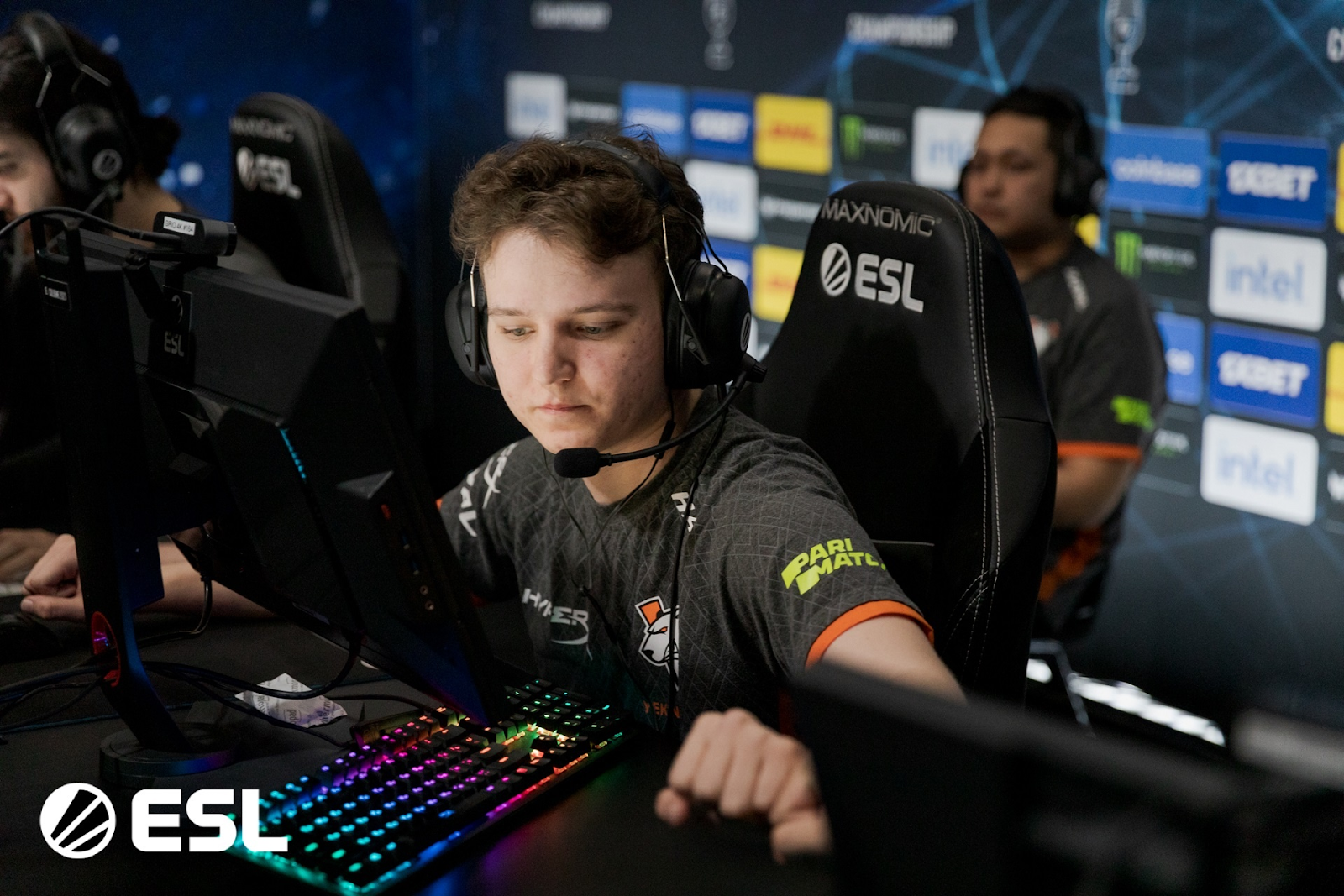 The arrival of FL1T has transformed the Russian outfit, with the team steadily improving as the Russian continues to settle in. The group stage saw Virtus Pro triumph over the Copenhagen Flames and a weakened NIP, which guaranteed their place in the Spodek Arena. In the Upper Bracket final, the CIS squad fell short - losing comprehensively to a dangerous-looking Heroic.

Despite the imperfect run, this Virtus Pro side looks potent and given the organisation’s history with the greats of Polish Counter-Strike, this roster could have an edge in terms of home-crowd advantage. Could we see a magical journey to the trophy for last year's finalists here in Katowice this year? Only time will tell with their opening playoff against a scary-looking G2 Esports.

G2 Esports, through the guidance of Carlos “ocelote” Rodríguez, started 2022 off with some ambitious roster moves. The addition of coach Remy “XTQZZZ” Quoniam and leader Aleksi “Aleksib” Virolainen looked to strengthen the strategic side of the international squad. However, one transfer caught the attention of the entire community. The purchase of Ilya “m0NESY” Osipov, a sixteen-year-old from NAVI Junior, took the Counter-Strike world by storm. The young Russian is a thrill to watch and has impressed so far. 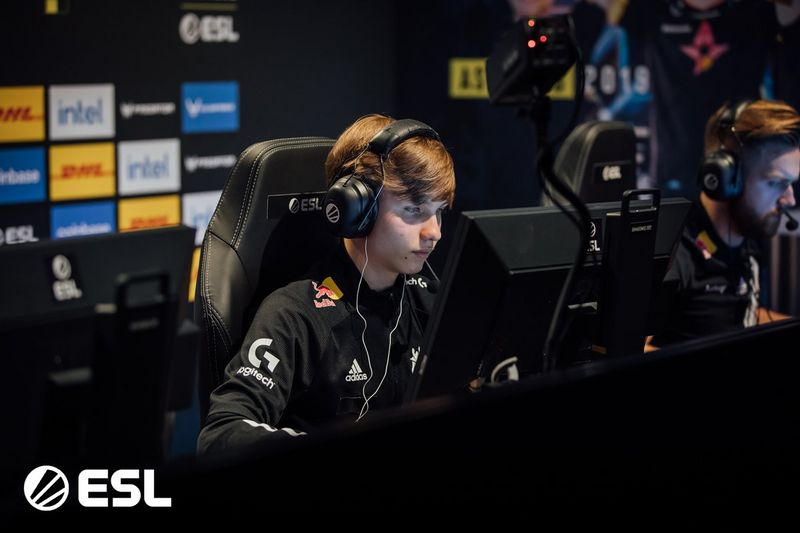 Starman Nikola “NiKo” Kovač has been untouchable throughout the group stage. The Bosnian is currently the highest-rated player at the tournament and has overshadowed the likes of Oleksandr “s1mple” Kostyliev and Mathieu “ZywOo” Herbaut up until this point. G2 Esports did falter initially, suffering a close-fought defeat at the hands of Fnatic. Since, however, the European lineup has continued to grow into the competition and are playing with confidence. They completed the lower bracket run, laying waste to Team Liquid, FURIA and Astralis in the process.

G2 Esports are incredibly exciting to watch this year, and having this lineup in the Spodek Arena is a real treat. Many fans and pundits alike are interested to see how youngster Ilya “m0NESY” Osipov will fare inside a pressure-filled arena. Their first game will see them face off against Virtus Pro, a tough test for anyone. A victory will see Natus Vincere waiting in the wing - with s1mple versus m0NESY an intriguing prospect.

The reigning champions of Katowice, Gambit, return to the playoffs once again. This time in a very different environment, due to the last iteration of the famed competition taking place online. Similarly to G2 Esports, Gambit also began their tournament with a loss, enduring a close defeat against NIP. This acted as a wake-up call for the majority Russian team. They successfully won the remaining matches, including a comprehensive victory over the much-hyped new Vitality roster.

Ever since their initial victory at IEM Katowice last year, Gambit has been a force to be reckoned with. Online, they can quickly dispatch any team in the world, including the seemingly unbeatable Natus Vincere. Their major pitfall was noted upon the return to LAN, where the relatively inexperienced CIS lineup looked rattled. Especially their star rifler, Sergey “Ax1Le” Rykhtorov, who simply was not performing to the exceptional standards he had set for himself online.

IEM Katowice 2022 might very well be the turning point for this roster, as Ax1Le looks as if he’s back to his best - posting absurd numbers thus far throughout the event. Their star sniper, Dmitry “sh1ro” Sokolov, continues to perform excellently and has provided countless clutch moments for his team in the group stage. These are all good signs for the Russian outfit, and an initial match against FaZe will decide whether they are capable of retaining their crown in Katowice or not.

FaZe are the only team remaining in the competition who arose through the Play-In stage, and what a run it has been. The international lineup has faced much misfortune in Poland, with multiple players forced to play from a hotel or sidelined completely due to COVID-19. They fielded a roster containing the Australian Justin “jks” Savage throughout the Play-In as a stand-in. The woes for FaZe did not end there; however, upon the return of Robin “ropz” Kool, Håvard “rain” Nygaard was then forced to be sidelined and play the tournament from his hotel room.

Through the adversities, however, FaZe stood tall and performed excellently. They found wins over Team Liquid, Fnatic and an unbelievably close defeat against world number one team Natus Vincere. On the final map of Mirage, the European lineup found themselves 15-10 up, in pole position to take the series home and gain direct promotion to the semi-finals. Despite losing out in the end, Finn “karrigan” Andersen and his men have shown incredible character during IEM Katowice. They should be proud to have made it to the esteemed Spodek Arena.

Although the situation involving Håvard “rain” Nygaard is unknown at this time, FaZe have shown they are capable of going toe-to-toe with the best teams in the Counter-Strike scene. A matchup against Gambit is what awaits them, and given the remarkable form seen from Helvijs “broky” Saukants at this event, FaZe are a severe threat to all in Katowice. 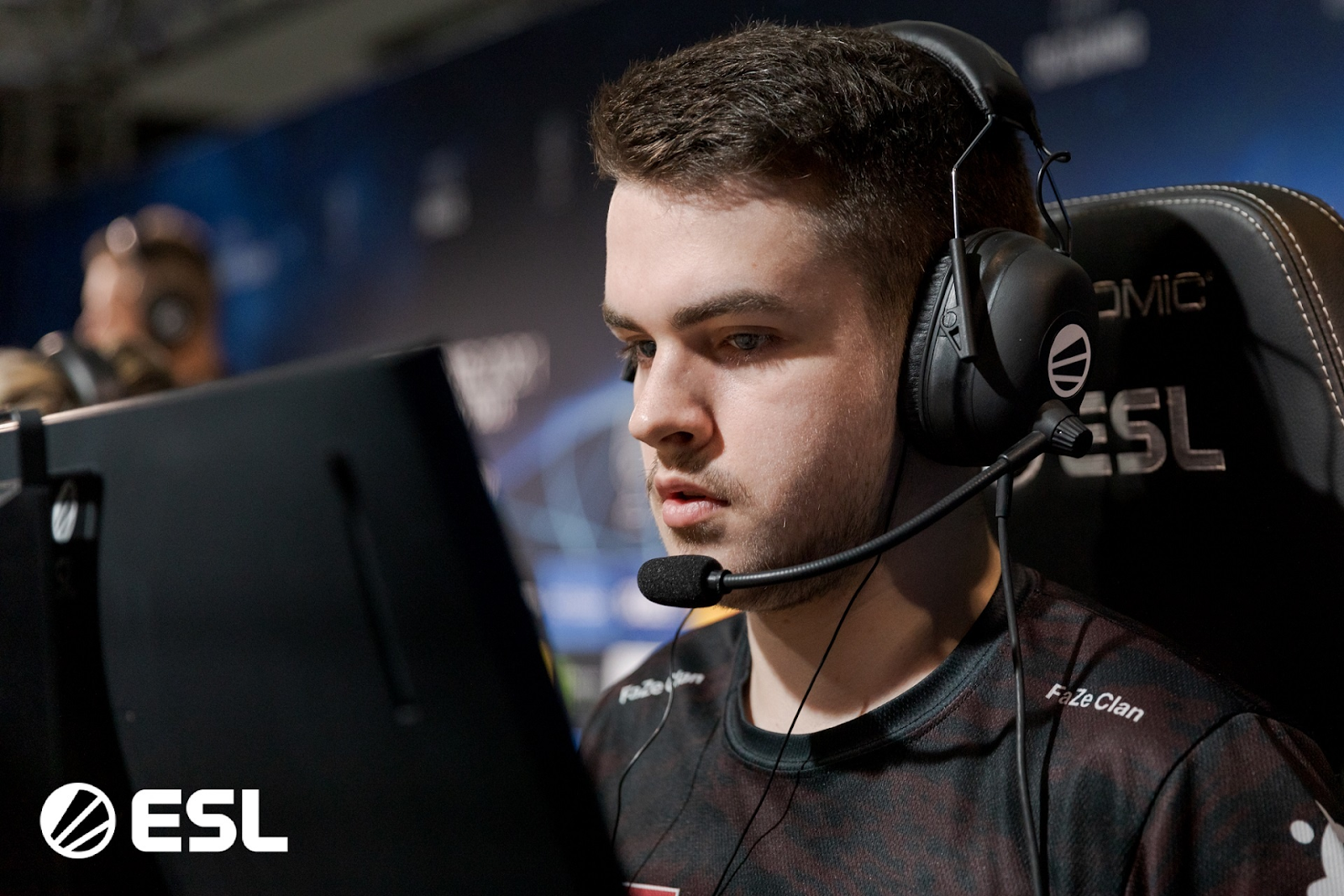 Natus Vincere ended 2021 on the precipice of an era in Counter-Strike, and many believed their dominance would continue heading into the next season. The Ukrainian outfit started poorly in the new year, having close losses against MIBR and Astralis at Blast Premier Spring Groups 2022. This shaky level of play continued into IEM Katowice, where Kirill “Boombl4” Mikhailov and Co could not perform to their potential. 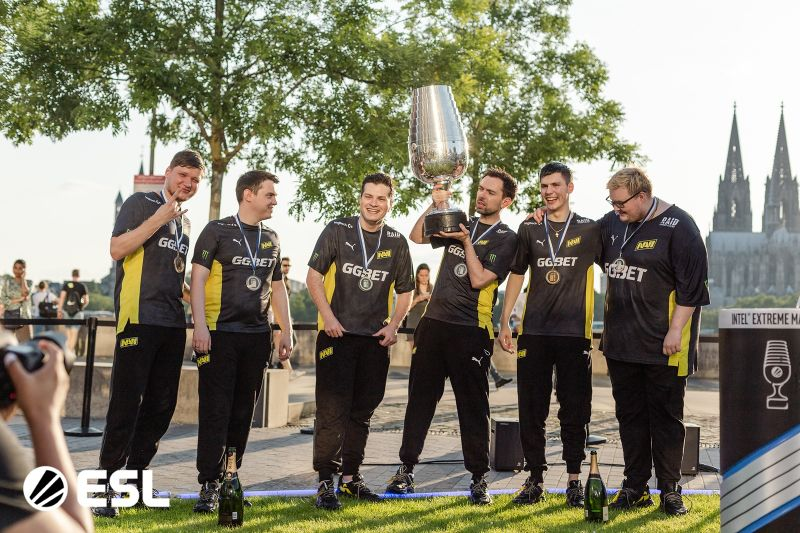 Despite this, Natus Vincere managed to grind out results throughout the group stage, winning tight matches against ENCE, FURIA and FaZe. This is a sign of a genuinely phenomenal unit, as even when the Russian-Ukrainian squad is not at their best, they still look like the best in the world. Natus Vincere achieved a spot straight to the semi-finals, where they will face the winner of G2 Esports vs Virtus Pro. The world’s number one team will be considered the favourites going into either of these matchups and will be looking to extend their era in Counter-Strike.

Throughout 2021, Natus Vincere proved to the world their prowess under pressure and their ability to thrive in a crowded environment. Their dominance at the PGL Major Stockholm showcased that the best. Andrii “B1ad3” Horodenskyi’s squad are now considered serial winners throughout the scene, and victory in the Spodek will only extend their reign over it.

Heroic spent the majority of the off-season under the radar. In 2021, the Danish team found considerable success - the highlight being their win at ESL Pro League Season 13. At IEM Katowice, whilst the new and exciting rosters were taking all the spotlight, Heroic quietly proceeded to destroy their opposition and gain themselves a straight passage to the semi-finals. Wins against OG, Vitality and Virtus Pro displayed the strength of this all Danish roster, and they look like genuine contenders for the trophy this year.

An integral piece to the Danish organisation’s progress at this event is the development of nineteen-year-old Martin “stavn” Lund. The PGL Major saw the Danish youngster step out on a global stage and show his worth as a star player. In subsequent events, stavn continued this trend which led to him earning the spot as the second-highest-rated player at this competition heading into the playoffs 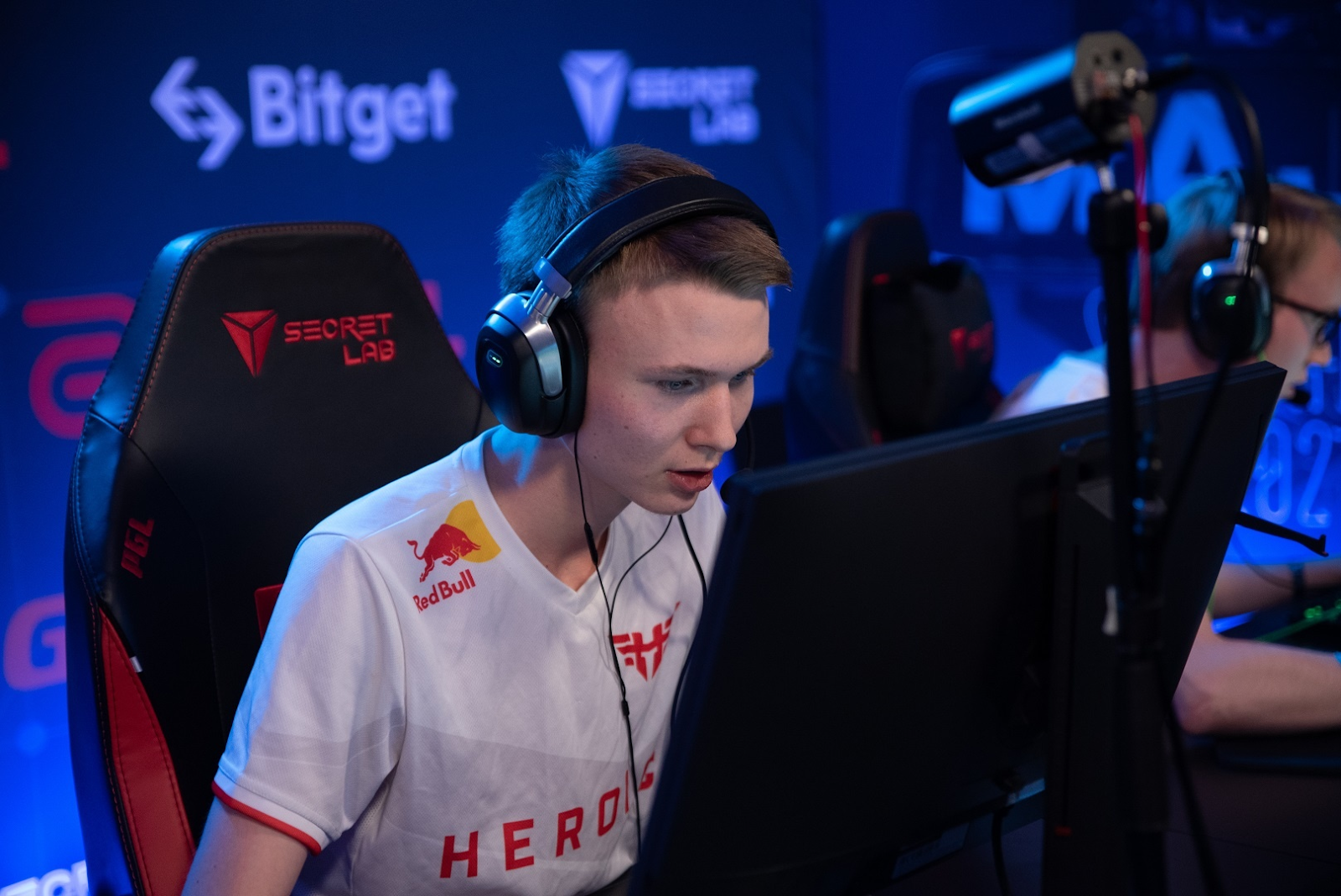 For a while now, Heroic has been considered the best team in one of the most star-studded regions in the history of Counter-Strike. The Danish scene is full of passionate fans - who are all hoping for a magical run, just like at ESL Pro League Season 13, which ended with something exceptional from Casper “cadiaN” Møller. Can the Danes come out on top in Katowice?