ISG Seiya: “We looked a bit shaky sometimes but we ended up taking the LLA championship. It was definitely a process that took the whole year.”

Following a three-year absence from international competition, Isurus Gaming returned to League of Legends' biggest stage as the representative for the Liga Latinoamericana (LLA) in the 2022 World Championship. Certainly, their appearance in the game's centerpiece event was the culmination of a long journey that saw them make numerous changes to their lineup and coaching staff.

Seemingly anyone and everyone weren't left unscathed from the constant swirl of adjustments Isurus made in their pursuit to being LLA's best team once again — anyone except for Seiya.

As far as LATAM LoL is concerned, Édgar Ali “Seiya” Bracamontes is one of its greatest players. Since the time he started playing the game in early 2010, Seiya has gone on to win 15 domestic championships, the most out of anyone in the region.

Not only that, he has maintained his individual skill level near the top of the LATAM server ranked ladder by reaching Challenger every year since Season 3.

Regardless, for all of his individual prowess, in recent history, Seiya hadn't enjoyed equal success in team play. Three years went by without winning a championship since last appearing in Worlds 2019 with the same Isurus team, all the while finishing Top 4 in five consecutive splits.

Nonetheless, Isurus' — and in essence Seiya's — misfortune drastically shifted for the better once the 2022 summer split rolled around. With the inclusion of Jesus “Grell” Trujillo as their newest jungler and a torrid playoff run that saw them defeat defending champion Team Aze and first-seeded Estral Esports, Isurus booked their ticket to Worlds; giving Seiya another chance to stand on the Worlds stage, this time in front of a home crowd inside the LLA Studio.

Following Isurus' opening match against MAD Lions in Worlds 2022, Seiya spoke to BLIX.GG to discuss his return to international play after three years, how he progressed within the time span, the journey it took to get there by winning the LLA, and his thoughts on serving as the host for the Play-In stage.

Pedro Romero, BLIX.GG: There's been plenty of anticipation about Isurus representing LATAM and competing in Play-Ins in Mexico. How has this experience been to play the opening match in front of the home fans for the start of Worlds?

Édgar Ali "Seiya" Bracamontes: We've been pretty excited about the World Championship. At first, I didn't really care much that it was here. I just wanted to play and it didn't matter where I had to be, but now, in seeing all the other teams come and practice here, it's been fun having pretty much all of the fans cheer you on, while no one cheers for the other teams.

It's kind of funny and I like it, but it's also been kind of weird especially because we're playing in the same place we play in our league (LLA). It's like we're playing in the league again. I would have been really happy if we played in any other place just to have something a little bit more fresh, but it's been fun and I'm happy to have the opportunity to play here in my country.

BLIX: Talking about this weirdness you feel, considering the fact that you're playing in front of a home crowd as opposed to past editions in which you played outside of Latin America, is it a good or bad thing to have?

Seiya: I wouldn't say the crowd is a problem. Obviously, it's an advantage to have the crowd on our side and it has definitely helped us a lot, but I think the weirdness comes from just playing in the same place that we play in the LLA. The waiting room is the same and the stage is the same.

That kind of stuff is a bit weird because you take away the epicness of the World Championship from new stuff. We might be in game and forget we're actually in Worlds. [laughs] My teammates kind of feel the same but it's good. It takes away a little bit of nerves from us.

I think it makes us probably play better. We're used to this place, we won here, so it's no problem.

BLIX: Talking about your career specifically, it's been three years since you last appeared in Worlds and you had to undergo a very long journey to return to this point. What do you make of the long journey you underwent within that time and what adjustments have you made?

Seiya: It's been really tough to come back to the Worlds stage. For a few years, we haven't been able to win our league, so for a moment, I did think, 'Damn, will I ever come back and play in an international tournament again?' or 'Was that my last chance?' I think for some splits I was kind of lazy.

Definitely not winning played a part in that, and in some other splits, our team just was not good enough to win the league title. It's been a process of being with Isurus and building another team from scratch after becoming champions. We hit a low point and had no more players so we rebuilt a team again and get back in form. I got kind of lazy for a while so I had to get back in form, be a good asset for my team, and actually make a difference in games. 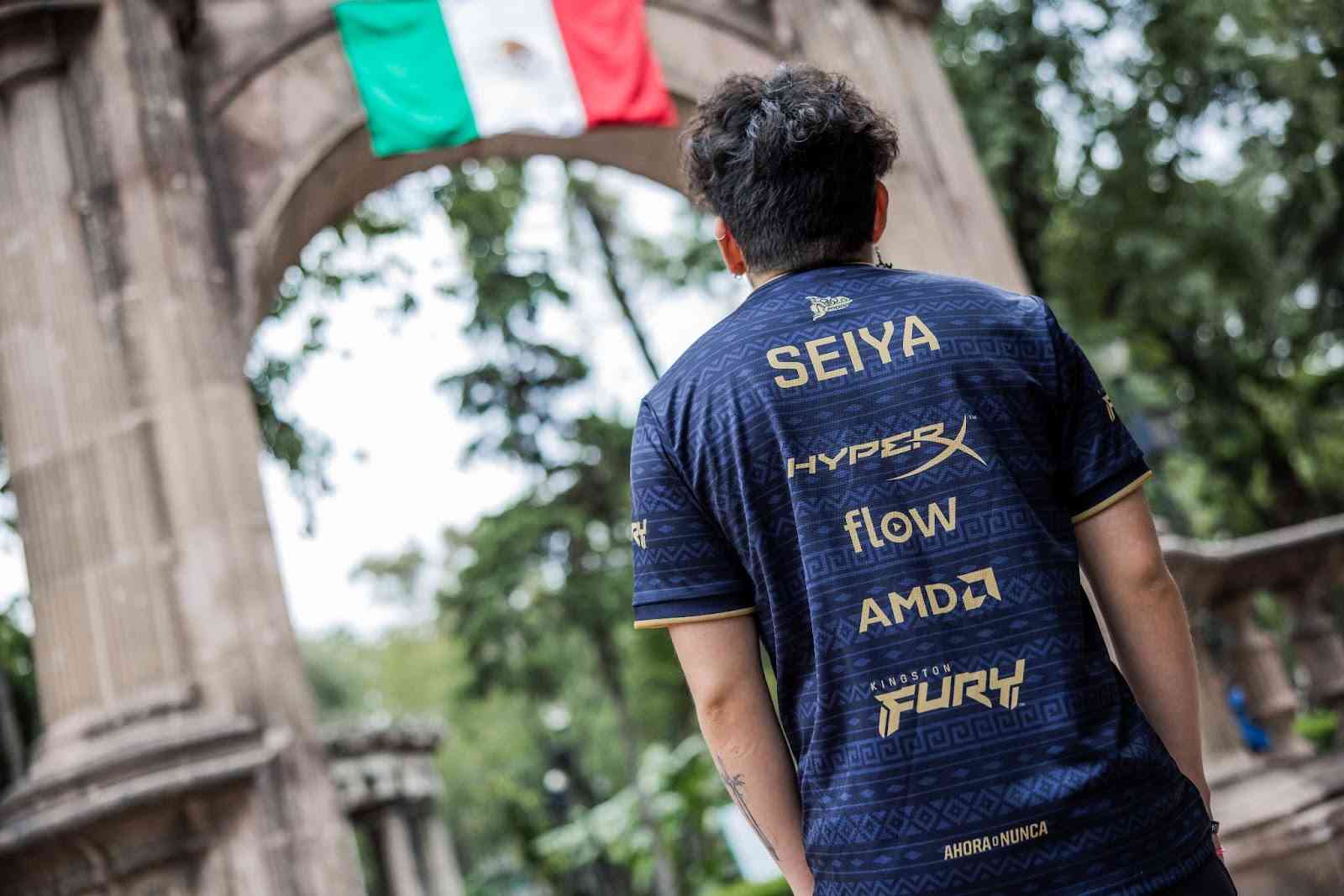 Isurus Gaming's Seiya is pictured from behind with his hands in his pockets wearing his team jersey with his tag and sponsors visible on the back.

Seiya: I wouldn't blame it all on one thing, but I think one of the most important reasons was just playing a majority of my games online. I think it was kind of disheartening. It took a lot of the fun away from competing, in my opinion. It became pretty dull playing online every week so I just became lazy as a result.

As I said, I wouldn't blame it all on that. It's definitely my fault too, but it definitely was a big hit to my motivation what with the pandemic, playing online, and all of that stuff. When we were able to play again on stage and have more fun, I definitely felt that competitive urge come back and that just made me play better.

BLIX: What made this particular team stand out and actually win at the end of the split compared to past teams?

Seiya: At the start of the year, we had a we had a nice team but we just couldn't make it happen. We just weren't good enough, but at the end of the first split, I felt we were playing better. We had a little roster change and we ended up playing better and feeling better as a team which helped us end up getting fourth place [in spring playoffs]. We were the sixth seed in playoffs and we got fourth place by winning a couple of Bo5's against teams we didn't beat in the regular season at all, so it was kind of like, 'Guys, we aren't this bad. We can definitely do it.'

For the second split, we had another roster change by adding Grell to the jungle. The momentum we had from spring and the addition of Grell, one of the best junglers in the region, pushed us a lot so we had a pretty solid summer. We looked a bit shaky sometimes but we ended up taking the LLA championship. It was definitely a process that took the whole year but I think the addition of Grell was the key after all.

BLIX: The region has been gaining attention with respect to individual players distinguishing themselves and moving to foreign leagues as a result. The biggest example of that is Josedeodo who moved to North America after competing in Worlds 2020. With the exportation of more homegrown players, how do you view the development of LATAM in League of Legends at this time?

Seiya: I think it's something that everyone likes when a player from Latin America goes to play in another region. They get all the support from here. It's a cool thing. Josedeodo has a lot of fans from here. We all cheered him on. We all wanted him to win in playoffs and come to Worlds too (which he didn't) but it's been fun. I think a lot of players' focus is really bad. They really want to shine in LLA, MSI, and Worlds and take that as a way to get recruited to NA LCS teams or whatever.

Their dream is to play in NA so it's a natural process. It's fun. As I said, we always cheer the players on that make the move and we wish them success, but for our own region, I guess the talent takes a little bit of a hit. We lose maybe some of the best players sometimes but it's fine. Some new players will come and take their place.

BLIX: You've been a player for basically the entire existence of professional LATAM League of Legends. You started playing the game in 2010 and have since stayed in top shape up until now. How much longer do you see still being a pro player?

Seiya: I wouldn't like to do anything else. I think competing and playing on the world stage — there's nothing quite like it. It's just way too good and it's what I enjoy doing the most. I see myself competing for a long time, but I might have a little break sometime in between just to stay composed. I've felt a little exhausted sometimes. Maybe I'll do [sic] a little break and then come back swinging after.