JD XL Torok: "We were hopeful the benching [of EMENES] in the long-run would work out to be a net-positive as our teamplay could develop further with Mrozku." 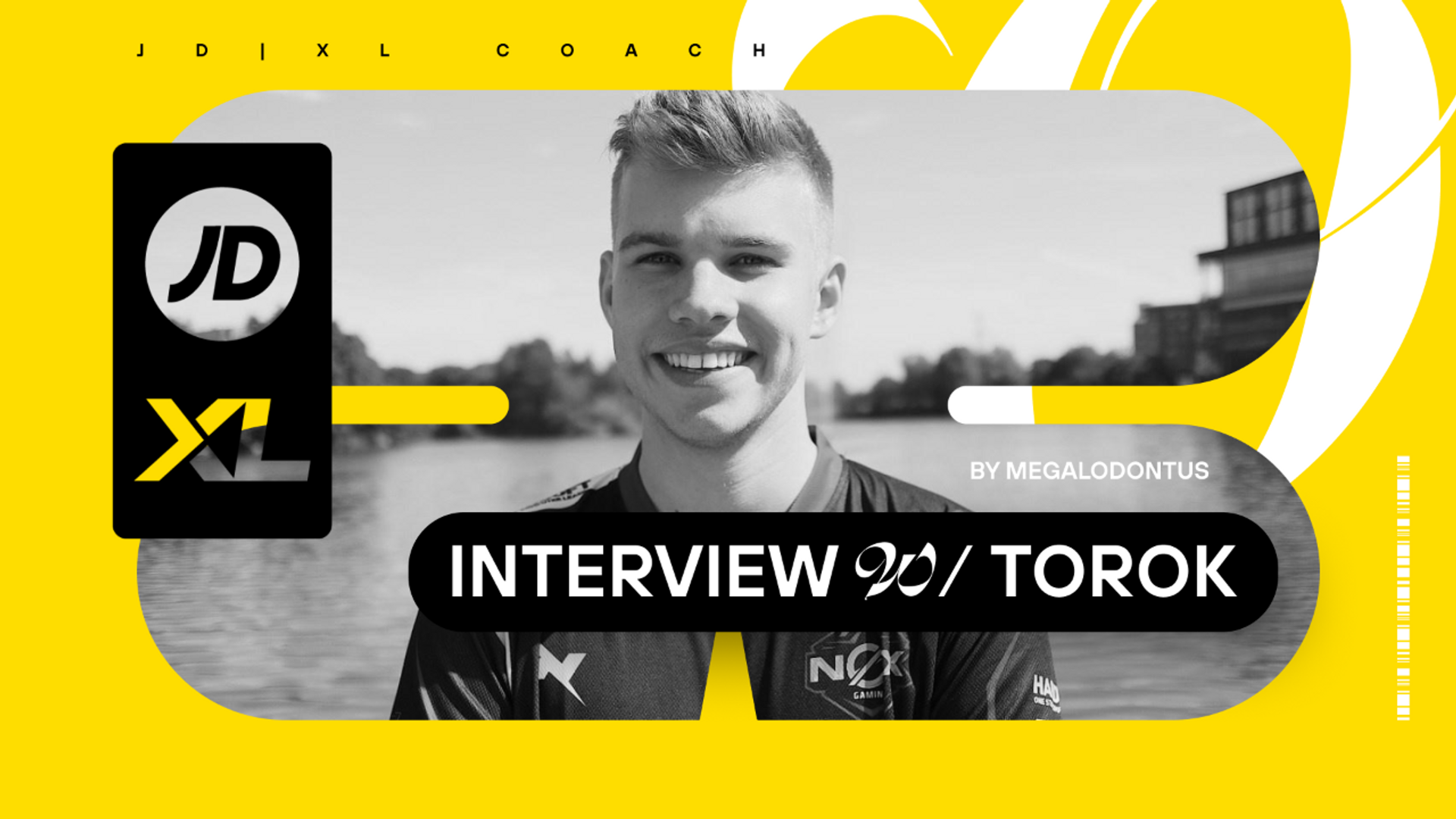 Excel Esports’ academy team JD XL have had quite a year so far. From spring, where they unexpectedly lost to Riddle Esports in the first round of playoffs, to summer where they had to deal with the benching of start mid-laner Jang “EMENES” Min-soo but still managing to qualify for the Amazon European Masters. However, JD XL would not make it out of Play-ins; ending their EU Masters journey.

Head coach James "Torok" Thomsen was there to experience their roller coaster journey from start to finish, and took time off to reflect on his journey in an LEC academy team with BLIX.GG. He talks about his learnings and challenges in JD XL, his thoughts on the ongoing EU Masters and how the ‘Torok’ meme came about.

Megalodontus, BLIX.GG: Thank you for accepting this interview with us on BLIX.GG. With your run in Amazon EU Masters 2022 summer done now, how would you reflect on your year with JD XL?

James "Torok" Thomsen: This year has been an experience I wouldn't trade for the world. Despite the ups and downs in terms of results, working as the head coach for JD XL has exposed me to many valuable challenges, as well as wonderful experiences, that I can learn and grow from.

BLIX: Talk to us about some of these valuable challenges and wonderful experiences. What are your biggest learnings and takeaways from your time with JD XL?

Torok: Experience wise, this spring was my first time in a gaming house and office set-up, which was great for enhancing my coaching skills in an offline setting. That naturally came with its own set of challenges since we could only get three people to the United Kingdom for the vast majority of spring, since our previous bot lane of Dominik "ZAMULEK" Biela and Mateusz "Kikis" Szkudlarek required visas.

This meant even though we were technically in an offline setting, we were still hybridising our resources between who was in-person and who wasn’t. Regardless, just being a part of a functioning office and having all the different responsibilities that come with it was great and something I hope to repeat again soon!

Another notable challenge the team faced was the benching of EMENES that we were forced to make late into summer while swapping in our substitute Adrian "Mrozku" Skonieczny. Removing one of your star players for someone in their rookie year was a dramatic shift within the roster, and this was a challenge we had to overcome as a team.

In the end, we came inches away from making it work. We had a close 3-2 series against the eventual champions of the NLC in Dusty during the 2022 summer playoffs, and finishing one game away from reverse sweeping our EU Masters 2022 summer Play-ins group. It definitely left some great points for reflection on how we could have implemented a swap like that more effectively if I’m ever faced with such a situation again in the future.

“After being subbed in, Mrozku spent time in many 1v1’s to get up to speed on matchups, played a huge amount of solo queue, and learned months worth of macro content in just a few weeks. His work ethic was excellent and something he can be proud of.” - Torok

BLIX: Swapping out EMENES indeed did see you guys struggle and one of the players that did visibly -and understandably- was your substitute mid laner Mrozku. What was it like working with him and how did he fit with the team? How did the team try to adapt around this change from NLC to EUM?

Torok: Working with Mrozku was a blessing and he fit with the team well. Adrian is conscientious, great to be around and someone with a bright future ahead of him. Whilst there was certainly a correlation between him being subbed in and the team struggling, I would suggest that was more of how big the boots EMENES left behind were for the entire team’s ability to play and not just what was happening in mid lane.

After being subbed in, Mrozku spent time in many 1v1’s to get up to speed on matchups, played a huge amount of solo queue, and learned months worth of macro content in just a few weeks. His work ethic was excellent and something he can be proud of.

As a team, we naturally tried to adapt to the change by placing more of an emphasis on skirmishing through mid, since that fit well with Mrozku’s champion pool and helped integrate him with our jungler Daniel "Dan" Hockley and support Gary "FGG" Clarke. That strategy served us well in the Dusty series.

We shifted our strategy after, to enabling our side lanes early on and using mid as a joining skirmisher if fights were to break out in the river rather than in mid lane itself. In both cases, we found some measure [of] success, but it wasn’t enough to win out in the end.

BLIX: I understand EMENES is also a touchy subject and to quote Tim Reichert on Esports News UK, where he said of the benching, “But in that last game where he just ran it down, it was a bit of, enough is enough,”. How did yourself and the team react to the benching and how was he like to work with prior to that?

Torok: EMENES is an incredibly talented individual. Unfortunately, he let himself down when it came to operating effectively as a part of a team. We were hopeful the benching in the long-run would work out to be a net-positive as our teamplay could develop further with Mrozku. Whilst that did happen to an extent, it just wasn’t enough or in time for us to be able to reliably take wins versus our opposition in both the NLC playoffs and EU Masters.

BLIX: On being able to work in person and on-site, did you and the team interact or scrim a lot with Excel’s main LEC team and staff?

Torok: We scrimmed infrequently as a warmup for the main team before LEC games in spring but not in summer. Of course, it would be nice to practise with the main team, but it also has to be productive for both sides.

Since they can get great practice with other LEC teams, it made sense for there to be less interaction between the main and academy team than perhaps some people would expect from the outside.

BLIX: On the recent EU Masters Play-ins run, it was less than ideal for you and JD XL and it seemed like the problems from NLC summer were carried over. Talk to us a bit about how it went from your perspective.

Torok: Day 1 of Play-ins killed us. Seeing our level in scrims, we all knew it was possible to win against every team in our group, but it was also possible for us to lose to them if we didn’t show up.

Unfortunately, there were so many blunders in our first three games that we left ourselves a mountain to climb in the rematches. Whilst we showed something much closer to our level in the second day of groups, we slipped up at the final hurdle against KRC Genk Esports which sealed our fate.

BLIX: Since you played against some of the teams in EUM and probably scrimmed a number of them, which team do you think will win it? Do the NLC teams have a chance?

Torok: X7 Esports and Dusty have a chance, no doubt about it, but it would certainly be as outsiders rather than favourites. X7 have huge individual firepower to rival teams from the LFL and LVP SuperLiga, whilst Dusty habe some great teamplay and unique picks (Kallon "Kerberos" Ram’s Nasus, spare me please). To me, that means both of them could upset any team in the tournament on a good day and you may only need that once or twice to win it all.

My favourite for the tournament is Vitality.Bee but there are many good options to choose from. I’m sure LDLC OL, UOL Sexy Editions and Team Heretics will try their best to give them a good run for their money, and I hope we can see an NLC team up there as well!

BLIX: Now that you’ve had the chance to work with an LEC academy team and I understand you are completing your studies as well, what are your goals for next year and beyond?

Torok: Alas, I still have my third and final year of university to complete before I’m truly a free man! So I will still be dual-wielding my degree and esports for a little longer yet.

That being said, my goal for next year is to finish university and continue to pursue full-time coaching to keep me on track for making it to LEC as soon as I’m able to.

As a side quest, it would be great to win the NLC next year and represent the league as a heavyweight contender heading into EU Masters. There is so much potential within this region and it would be amazing to be the first coach to lead an NLC team to be crowned as EU Masters champions (assuming X7 and Dusty don’t win this edition).

“My favourite for the tournament [EU Masters] is Vitality.Bee but there are many good options to choose from. I’m sure LDLC OL, UOL Sexy Editions and Team Heretics will try their best to give them a good run for their money, and I hope we can see an NLC team up there as well!” - Torok

BLIX: Fun question, I was recently made aware you are an RTS fan from Alexandre "Archarom" Maia’s interview with you. Are there any upcoming RTS titles that you’re excited about?

Torok: [laughs] Well, that genre certainly holds a special place in my heart having grown up on so many classics such as Command Conquer 3, Red Alert 3 and Starcraft II. Alas, RTS’s don’t hold the sway they once did and I haven’t seen a particularly innovative reboot just yet, so I suppose the jury is still out on that one!

BLIX: Before we end then, can you tell us how the ‘Torok’ meme came about?

Torok: That was so weird! I was playing in a charity tournament set up over the off-season and I just typed my IGN so I could be added to the lobby (my name had the Greek letter “Tau” in its name so it wasn’t typable). In any case, suddenly the screen cap went up on Twitter and it somehow just kept spreading! You got to love the internet sometimes.

The Amazon EU Masters 2022 summer Main Event resumes on September 5th and you can catch it on the EU Masters Twitch channel.