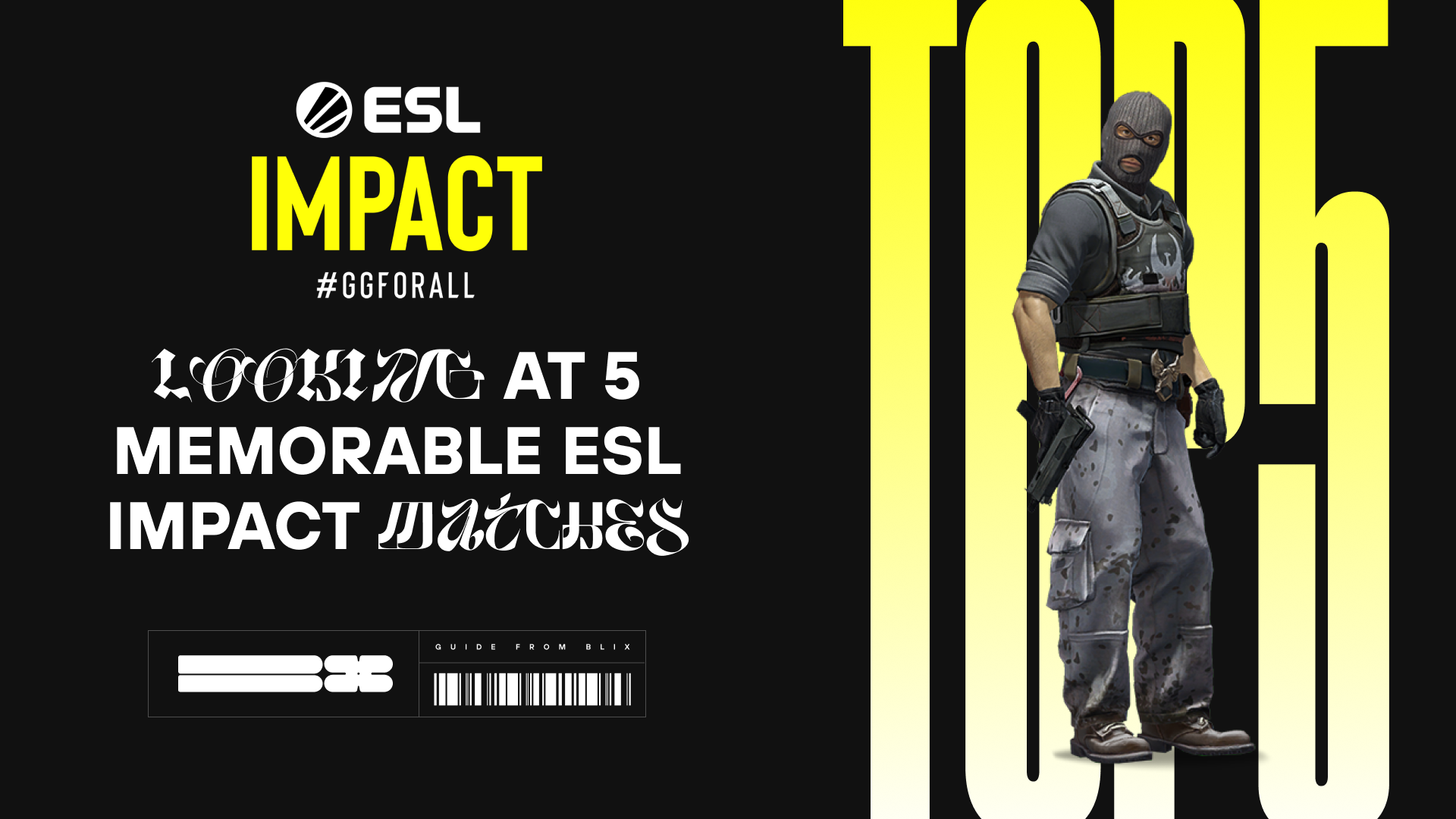 Though ESL Impact has been around for less than a year, it has already delivered more than a decent amount of matches which fans can be fond of long after they’re completed.

From watching Nigma Galaxy become champions to HSG stamping their mark in the female CS:GO scene, here is a list of the five most memorable matches in the ESL Impact League circuit so far.

A wave of excitement swept through the female CS:GO scene the likes of which it hadn’t seen when ESL Impact was announced. Compared to before when teams competed in an intermittent array of tournaments, they now have a full-fledged league to work with. On top of seeing players making use of another second chance in jumpstarting their pro careers, they could now build a cohesive team without the threat of disbanding constantly veering over their heads.

Such was the scene when the Season 1 tournament was staged in DreamHack Dallas in the summer of 2022. An air of expectation filled the Kay Bailey Hutchinson Convention Center as the best teams competing for a chance to become the first champions of ESL Impact. Following three days of riveting CS, two teams remained: Europe’s Nigma Galaxy Female and Brazil’s FURIA Esports Female. Following their first encounter in the group stage, which extended to overtime, there was ample reason to believe the grand finals could go the full distance–-and that it did.

Bolstered by great form amidst a clustered schedule, FURIA opened the series with a 16-14 victory in Mirage before Nigma responded in kind with a 16-5 in Vertigo. Everything came ahead in Overpass, the same map where both teams initially faced in the group stage. Instead of having a repeat close tie in the map like the first time, Nigma shut the door with authority off a 14-1 CT-side half, punctuated by a 4k-display by Alexandra "twenty3" Timonina on the opposing team’s sniper rifle.

What began as a showcase for female CS:GO deep in the heart of Texas ended with Nigma Galaxy attaining all the spoils as the inaugural ESL Impact champions.

With the Impact League consolidating in the female CS:GO scene, it allowed for more regions to vie for a spot in the proper competition. One such region was Asia, where HSG won its respective qualifying tournament to reach the Season 2 finals. Despite making its first Impact League, HSG sported players who were already established members of the Asian female CS scene. Ramona "GFi" Azween Binti Zaharuddin of Malaysia, Nian “Hffo” Zhao of China, and Fong "Hazel" Sin-man of Hong Kong were all together on and off with Tyloo Female whereas Aisya “Argent” Sabrina played alongside her compatriots in Malaysian teams like Orange Esports.sphynx.

Even so, with all the experience HSG possessed, they weren’t expected to make a run in the event as they had to perform well in a stacked group featuring reigning champions NGX, Evil Geniuses Gold, and Counter Logic Gaming Red to advance to the semifinals, and as they ended their opening match in a loss, it looked to be the end for the Asian representative.

However, unbeknownst to all, HSG had other plans. The team rebounded emphatically by dispatching North America’s EG Gold in the elimination match to set up a crucial tie against CLG Red, who reloaded by signing Vivienne 'BiBiAhn' Quach, Coline 'Kaoday' Le Floc'h, and Marissa 'madss' Dasta ahead of the tournament.

A rough T-side half in Dust2 put HSG in an 11-4 hole early on, but with a resurgent CT-half propping them forward, HSG ended the first map as winners and owning all the momentum for Map 2. Though CLG Red bounced back with a 16-7 win in Overpass, HSG held firm in Mirage to take the series off a 16-11 display, which was capped by a 34-kill, 106.0 ADR, and 1.79 rating performance by Hazel, handing the team, and Asia in essence, a ticket to the semifinals.

Each tournament, besides offering teams an opportunity to create a singular shining moment during the heat of competition, also provides a fitting stage for a player to distinguish themselves under the brightest of lights. It is where ordinary people become household names at the drop of a hat. The heroes of this story feature Wiktoria "vicu" Janicka and Angelika "Angelka" Kozłowska, players who spearheaded Na’Vi Javelins' rise to the forefront of female CS off their 3-4th place finish in Valencia 2022.

Their ascent started when, as members of the independent Totalne Gituwy team, were signed by Na’Vi to take up the Javelins' name during Season 1 European qualifying. Although they came agonizingly short of reaching Dallas, losing 2-1 to what would become BIG EQUIPA, once Valencia 2022 rolled around, they continued improving to where they could now stand alongside the world’s best.

Even so, the Javelins had yet to rub BIG EQUIPA off their proverbial backs in competitive play. They lost both of their two encounters with BIG before butting heads again in the Group A decider match, which aptly locked a spot in the semifinals.

Fittingly, the third encounter between Na’Vi and BIG was not simple by any stretch. Both maps required overtime, and in both instances, it was vicu and Angelka who stepped up to lead Na’Vi to victory.

Their display amounted to 60+ kills for each person in addition to notching a +/- of +20, a rating higher than 1.30, and a series victory over BIG and a trip to the semifinals secured.

Besides staging its standard events, ESL Impact hosted two standalone events. One is set to be staged in Katowice in February 2023 whereas the first happened in July 2022 in Valencia, Spain. In the first edition, four of the eight participating teams enter by winning their respective qualifying tournament, which covers North America, South America, and Europe.

Specifically, in SA, its qualifying phase delivered what might be the most exciting match ESL Impact has ever seen either before or since. The grand finals pitted Black Dragons and MIBR against each other with a spot at Valencia 2022 up for grabs. After missing out on qualifying for Season 1 at the hands of BD, MIBR was adamant they wouldn’t miss out on playing in Valencia. Even if it meant fighting tooth and nail by any means necessary–they were playing with josi as their stand-in from Havan Liberty–they would do it regardless.

Such urgency was needed after MIBR lost 16-12 in Dust2 for the first match of the series. Fortunately for them, they rebounded to go up 15-9 in Overpass and need one more round to tie the series at a map a piece.

However, BD had other ideas. Six consecutive rounds for the opposing team extended the map to overtime, stunning MIBR and viewers alike to stand on the precipice of qualifying for Valencia themselves.

Thus commenced one of the longest overtimes in ESL Impact history. Thirty-six (36!) more rounds were needed to decide the South American qualifier for the international tournament. By the end, with the help of AWPer Mariana 'LyttleZ' Sabia with her 68/39 K-D, it was MIBR who won the second map and keep their bid alive. With all that momentum in their corner, MIBR would not relinquish it ever again as they finished BD on Inferno to qualify for Valencia, ending one of the greatest matches in recent female CS:GO memory.

If there was any semblance of doubt on Nigma Galaxy over whether they can sustain their place at the top of the female CS:GO scene after winning the Season 1 finals, that was completely eviscerated once the Season 2 finals rolled around. Since beating FURIA to claim the first Impact League title, Nigma had been unstoppable. They went 8-0 en route to their third consecutive ESL Impact grand finals, trouncing every opponent that came their way with relative ease.

The question was no longer who would be good enough to become the champion. It was now about who would be good enough to finally knock Nigma out of their throne. More often than not, that challenger was FURIA Esports. Each time Nigma made it to the grand finals, it was FURIA who served as the final obstacle between themselves and the title, and once again it was them who faced the champions in the Season 2 finals.

But despite FURIA’s best attempts at stifling Nigma, they couldn’t match the same level as their opponents. Even when they took Nigma to the farthest of limits, such as the 14-16 margin seen in Ancient, the closest the latter had been to defeat since Season 1, the champions were immovable in their pursuit of a third straight title. Every member of Nigma finished with a positive K-D and a rating above 1.10.