Meta Check: How Liquid maximised the Double Controller Comp on Split vs G2 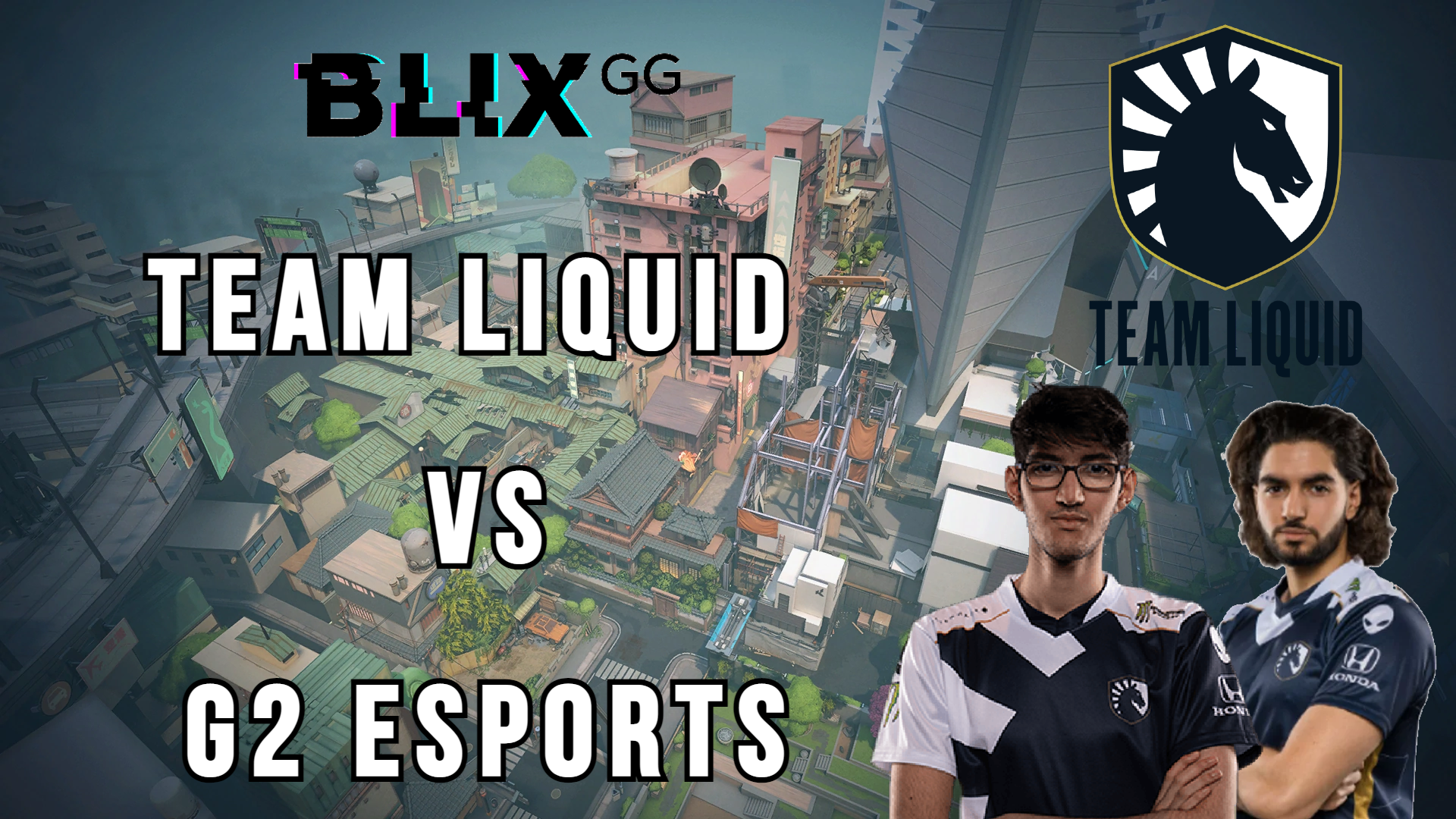 VCT Stage 1: Masters is right around the corner, and we can't hold in our excitement. VALORANT Patch 4.04 was dropped, and also, the situation ensued with FPX having to drop out. The Returning Champions: Ascend Club was knocked out. Metas were changed, players substituted, and teams replaced, but the quality of VALORANT still remains.

The Calm before Reykjavík

VCT: Stage 1 ended on an interesting note, with FunPlus Phoenix taking the trophy home. FPX played the event with a substitute in place of their players, their veteran IGL and star duelist: Kyrylo "ANGE1" Karasov and Ardis "ardiis" Svarenieks.

Team Liquid, however, was the team that received the slot to Masters: Reykjavík due to FPX's inability to field a competitive roster in time for the tournament.

Around this time, Riot Games decided to release the long-awaited 4.04 patch, which reworked three controllers in the game. The game played out differently with the changes brought about, and a test of adaptation ensued. Long established compositions were thrown out of the window, and controlled chaos took over. There was no calm.

As the carpets of VCT Stage 1: Masters unfurl, we decide to look into one of the more interesting compositions and how it was implemented in Team Liquid’s Split match against fan favorites G2 Esports.

Team Liquid are known for their inventiveness. Throughout VALORANT’s lifespan, they’ve been the first to adopt more unorthodox compositions in order to approach the game in ways they seem more appropriate for themself and also more interesting.

Team Liquid players and staff have often admitted that they love trying things that seem unconventional.

“We gave the players some freedom, and it’s interesting. [in terms of compositions] It’s a hard one to make it work, I’ll put it that way, but at least our team’s feeling confident, so we’ll back them.” - Connor "Sliggy" Blomfield.

The following compositions firstly contains two Controllers, without either of them being Viper, which rarely ever happens. Viper is the most essential controller in a double controller setup due to its ability to be a pseudo-sentinel esque agent on the defense. However, Liquid chooses to run a Brimstone and an Omen, both recently being buffed heavily.

Adil “Scream” Benrlitom is seen on the Sage here, serving as a semi-duelist with a decent amount of stopping power and utility. Elias “Jamppi” Olkkonen is on the Breach and serves as the primary initiator.

An important thing to note about Team Liquid is that they are one of the most loosely structured teams in the world. They have no dedicated IGL and very little structure to begin with. They play a very free playstyle, emphasizing good decisions from the individual players and good communication. All the players can serve any role, given the context of the round. They have no dedicated roles and a very high level of adaptability, so depending on the round, we can see any player picking up the entry, the lurk, or the Operator. This keeps them highly unpredictable and flexible.

Team Liquid beat G2 Esports 13-9 on the Map Split at the start of their VCT: Challengers 1 EMEA campaign. They started the game on the less favorable Attack-side, even more so for their own composition, and won a total of 5 rounds. However, on the defense half, they only lost two rounds and clearly showed the merits and strengths of the comp they were playing. Not to mention that their Attack was quite good as well. 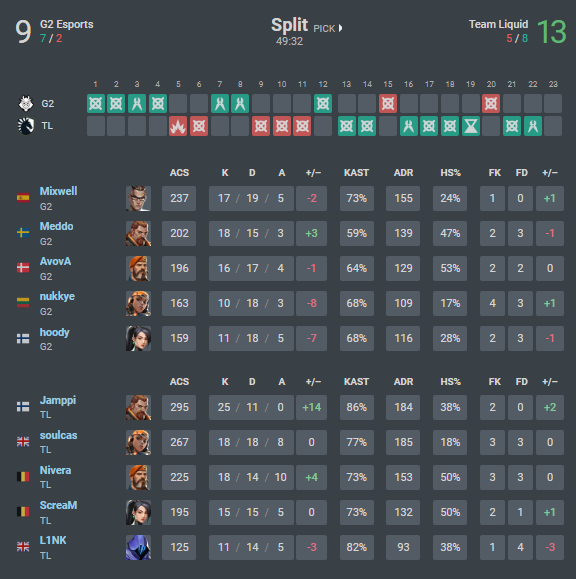 Team Liquid usually runs a 1-3-1 passive mid default, with them only playing to deny complete Mid aggression. They have a smoke in vents, usually from the Omen, every round. This denies any free information for the Defending side. After the aggressive sequence of the defenders is over, they proceed to retake mid, or at least contest it. 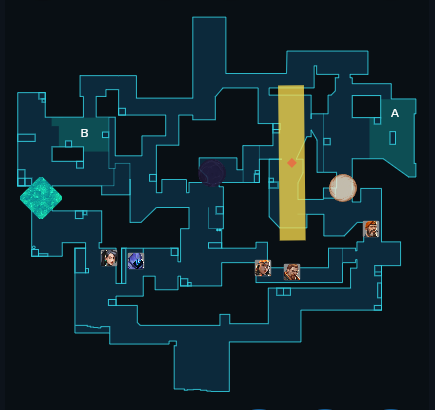 Over at A-main, Nivera on Brimstone serves as a Viper replacement in this composition. He lurks up A main or A ramp based on his read, but this is usually not very often. TL continues to smoke off A main to threaten the A ramp walk up and condition the Defenders to have a dedicated player holding Ramp and/or expend extra utility in maintaining control of it.

Jamppi stuns off A main or A ramp to ward off possible early pressure, and an OP just being posted up on Nivera. Jamppi then helps his team toward mid. Sometimes he’s also seen toward B helping Scream out if they expect any contention on B-main. In these rounds, Nivera plays more conservatively, only using his smoke and not giving off a free 1 on 1 to any OP posted on A-main. He’s the plug-and-play flex aspect of this default, allowing his team to engage and ward off pressure where they need him to.

After their early-round operations, they usually regroup somewhere off a pick and hit the site. They play a very straightforward Attack-side, heavily reliant on good fundamentals of spacing, decision-making, and trading.

Team Liquid on the Defense

Prior to this series, Team Liquid lost only 18 rounds on the defense since VALORANT: Champions 2021 on Split. All of these rounds have been post-plant. Team Liquid hasn't been eliminated straight-up on Split Defense since Champions last year. To say they have a strong defense is an understatement.

Team Liquid starts most rounds off with L1NK anchoring down the B-site, playing conveniently off his one ways to deny fast rushes, combined with his flash, which will stop most teams in their tracks.

Interestingly, we see Jamppi-- playing an initiator in Breach-- anchoring down the A site. This works out quite well because of Breach’s extensive stalling potential with the help of his flashes, combined with his large Area-of Effect Stun which stops most A-main pushes right there. He can easily buy time for rotation, and with his team’s utility, they could easily then continue to contest the site push. 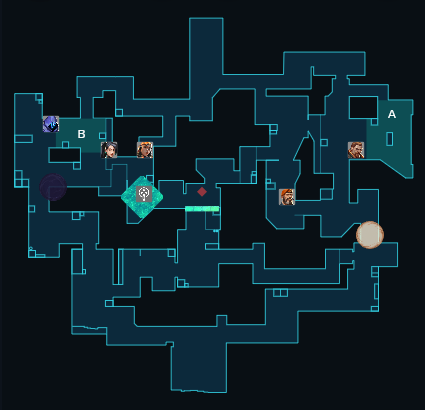 Scream, who is on the Sage, usually floats around on the map, but with significant freedom for both Nivera and soulcas as well. Nivera usually starts off on A ramp, early smoking A-main, with the availability of a Brimstone molly to stop fast rushes, combined with Breach utility. Soulcas usually starts B-heaven and mostly is accompanied by Scream, where they try to contest Middle with the wall. If not that, they usually try to initiate B-heaven fights with a slow and nade combo. However, they are quite free to start elsewhere on the map.

Similar to their Attack half, Team Liquid tend not to over complicate their rounds and play a style reliant on strong fundamentals and a lack of hesitation. The sense of comradery in them is evident, and they work as a unit. They swing off each other with good spacing, and aren’t afraid of taking risks. They trade well, without taking too many handicapped fights. This quality of decision making and good basic team synergy, along with their unpredictability and extensive utility usage allows them to have a stong Defensive structure.

Typical Attack Round: [Round 6]

This round outlines the typical yet basic loose structure of Team Liquid’s Attack. They set up to deny mid aggression, like we’ve discussed earlier, with Scream and Nivera at the extremities. Nivera catches Meddo trying to push A-main, with whom he can have a fair 50-50 fight thanks to Jamppi bullying A-ramp with his stun.

Nivera wins his fight cleanly and proceeds to take space up ramp and deny a trade with his smokes. He wins another gunfight there, and his team regroups and safely takes site and sets up in their post-plant setups to then convert the round.

In this round, after many rounds of smoking A-main typically and denying any Attack side aggression, we see Jamppi just walk up A main at 1:00 on the clock, which Mixwell did not mark with his Trademark ability.

Team Liquid are aware of Mixwell’s weaker money this round and based on this read they’ve decided to gamble on the lack of an A-main flank alarm bot. The gamble pays off in dividends, as Jamppi catches an insane timing on to Meddo and follows him up to Middle, where he eliminates him. This leads to there being no initiating abilities for the B heaven push that Liquid had stalled up till this point, and Mixwell has to push in dry-- through a smoke-- leading to an easy clean up for Team Liquid.

Team Liquid clearly is not letting G2 set up the rounds in the way they want to. With the amount of utility they possess, they can stall for as long as they need to while also being able to make ‘ratty’ plays with the Sage walls.

G2 never got to imprint their blueprint of play, at any point of this round, with Liquid always being a step ahead and poking them with many tiny needles right before G2 set up their big and bad knife.

Defense Side A Aggression: Round [21]

Here, we get to see Nivera put down his regular A main smoke, coupled with a Breach stun. He’s done this almost every round, with a few changes to how the Breach stuns, but this time they choose to punish it by holding the Smoke as well.

Nivera gets a freebie on Meddo, which is a big loss on their Attack. Avova tries to pull a Nivera with the A main lurk smoke, but G2 doesn’t have the same luxury to pull more aggressive lurks on the extremities when they run only one smoke agent. This leads to them being more one-dimensional and easier to punish.

Hoody sets up the Resurrection on Meddo but eats a Brimstone Ultimate and a Breach Aftershock. This kills off Meddo once more, which only puts more emphasis on the amount of utility Team Liquid possesses, and their intelligence to use it perfectly.

This is further reflected when G2 tries to hit B off the failed resurrection and run into an Omen Ultimate for information, followed by an Omen Flash and three players on the B site.