The third day PGL Major Antwerp 2022 Challengers Stage was filled with excitement and intensity with only two possible scenarios ion the table for teams: a spot with the Legends or a spot on the plane once eliminated. If you missed the first two teams eliminated, see them here.

The final results put each of Spirit, Ence & Outsiders in the Legends stage, while Complexity, IHC, and Eternal Fire got eliminated.

The day was a banger and pure Counter-Strike as we witnessed teams that wouldn’t give up easily.

Astralis started the series strong when they dominated the first half of Overpass, ‘blameF’ was unstoppable on the CT side with 20 kills. The Danes stopped every attempt from Spirit and were always a step ahead until Chopper cracked the code and switched to playing faster rounds which secured his team 5 rounds on the T side.

‘Degster’ was the star of the second half with his magical big green stick. With 19 AWP kills he became a nightmare for Astralis. Wherever they peaked, a scope was ready to take them down one by one.

Astralis struggled and only managed to have two rounds in the second half before the match ended 16-12 for the Russian squad.

Ancient is a heavily CT-sided map, and Spirit took the advantage as it is their second-best map with 65% win rate.

With seven rounds in a row and ‘Degster’ shining like the star he is, Spirit secured a 10-5 lead in the first half.

Astralis couldn’t stop Spirit on their CT side and were hopeless, winning only one round pushing their chance of qualifying.

The Danes still have one last chance for the PGL Major as they’ll be facing Liquid in a match where mistakes are unacceptable.

On paper it was an easy win for Imperial but IHC had a different say when they surprisingly closed Mirage 16-11 and a great show from ‘sk0R’ clutching the last round and dropping a 30 bomb.

Imperial knew they were facing elimination, so they had to bounce back on Overpass. Even though the first was close and ended 7-8 in favor of IHC, The Brazilians had to dance their own Samba, reminding the Mongolians they were facing Major winning players.

Two rounds were the best IHC could do as Imperial finished the map 16-10.

The experienced vs The inexperienced is a perfect way to describe the deciding map. Unfortunately, IHC fell to the circumstances and let their simple mistakes get the better of them, and the cost was elimination from the Major.

Regardless of the 11-5 score, IHC showed great resilience and managed to win five rounds in a row making the game competitive, but that wasn’t enough to take down a giant such as Imperial.

The Brazilians will be facing forZe in a series where the loser gets eliminated from the PGL Major.

forZe crushed Outsiders in the first half as if they were in a rush to reach the next stage, 11-0 was the score before Outsiders could win their first round.

It would appear that the Russian squad was done for but not so quickly. They hit back on the CT side when they attempted a comeback, winning eight rounds straight before ‘KENSI’ and his teammates put a stop to it, finishing Dust II 16-12.

Outsiders felt more comfortable on their map pick Mirage when they closed on forZe by playing the numbers advantage with 17 first kills.

Qikert was the difference maker with 24 kills & 100 ADR securing their map pick, forZe had a little to say on regardless of having a decent offense but their defense was less effective.

‘Yekindar’ was everything on Inferno. He was the player with the most kills, most damage, most assists, and most first kills and topped the server with an impressive 1.54 rating.

With such performance from one of the best riflers, the game had to go the Outsiders way even though the first half was forZe’s. ‘Yekindar’ took a huge step toward qualifying as they won 6 rounds in a row that destroyed any will to come back.

forZe started their journey by going 2-0 and needed only one win to qualify but they crumbled and lost their last 2 series putting them in a rough spot. 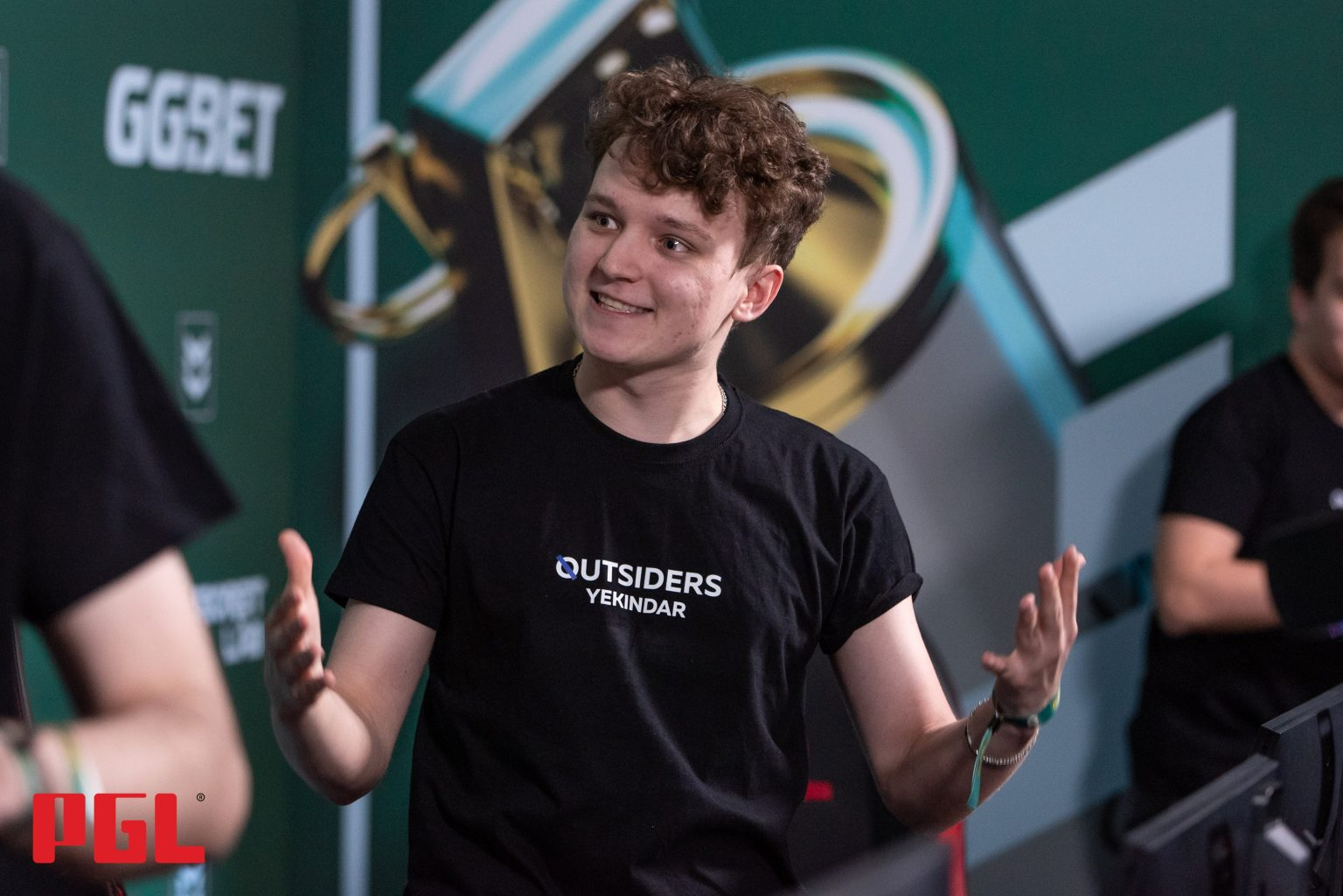 YEKINDAR was the key to Outsiders winning | Photo via PGL

A pure NA clash where the winner qualifies and the loser goes home went Liquid’s way when ‘floppy’ and his teammates went from Complexity to “Complicated.”

Complexity threw their chance to take the advantage on Ancient when they let Liquid have seven rounds on the T side which made the CT side an easy job for the best-rated player on the map ‘shox’. One round was all Complexity could manage to win in an eight rounds streak for Liquid.

On the same rhythm, as the last map ended, Liquid demolished Complexity 13-2 in the first half of Vertigo. With ten series points, Complexity came back from a distance and bounced back to a 15-12 score before Liquid put an end to their comeback and dreams of making the next stage.

‘NAF’ was the star of the series as he topped the server with 1.35 rating, followed by ‘floppy’ on the opposite side.

Bad News Eagles were hoping for an upset against the third-best team in the world.

They started on the right foot with a clever pistol-round win. ENCE instantly showed the world that they weren’t messing around and stomped the Eagles with one round after another, finishing the first half 13-2.

Just when it seemed like an easy win for ENCE, ‘gxx-’ woke up and chose not only violence but to destroy with his AWP. He led his team to recover with seven rounds in a row, almost tying the score at 12-10, ‘Hades’ managed to deny their comeback since they were an inch away from winning the map and secured a 16-13 on Dust II.

ENCEhase a 62.1% win rate on Nuke for a reason, and that’s because they’re unstoppable and had nine rounds on T side, which gave them the upper hand for a 2-0 victory.

Bad News Eagles’ T side was as weak as a pistol against a rifle and only won 1 round from a bomb plant which made ENCE qualify to the next stage while BNE will still have one last chance against MIBR.

The last match of the day was also the last day in the Major for Eternal Fire after receiving their third loss in this stage. Both teams were facing elimination after going 2-1 in the groups.

The Turkish line-up failed to complete a comeback on their map pick Vertigo after losing the first half 11-4 before MIBR secured Nuke with an astonishing second-half performance.

‘JOTA’ was the MVP of the series with a 1.43 rating giving his team a chance to advance to the next stage.

MIBR vs. BNE will be a match where both will be defending their last chance in qualifying, making it an intense series both for the spectators and players.