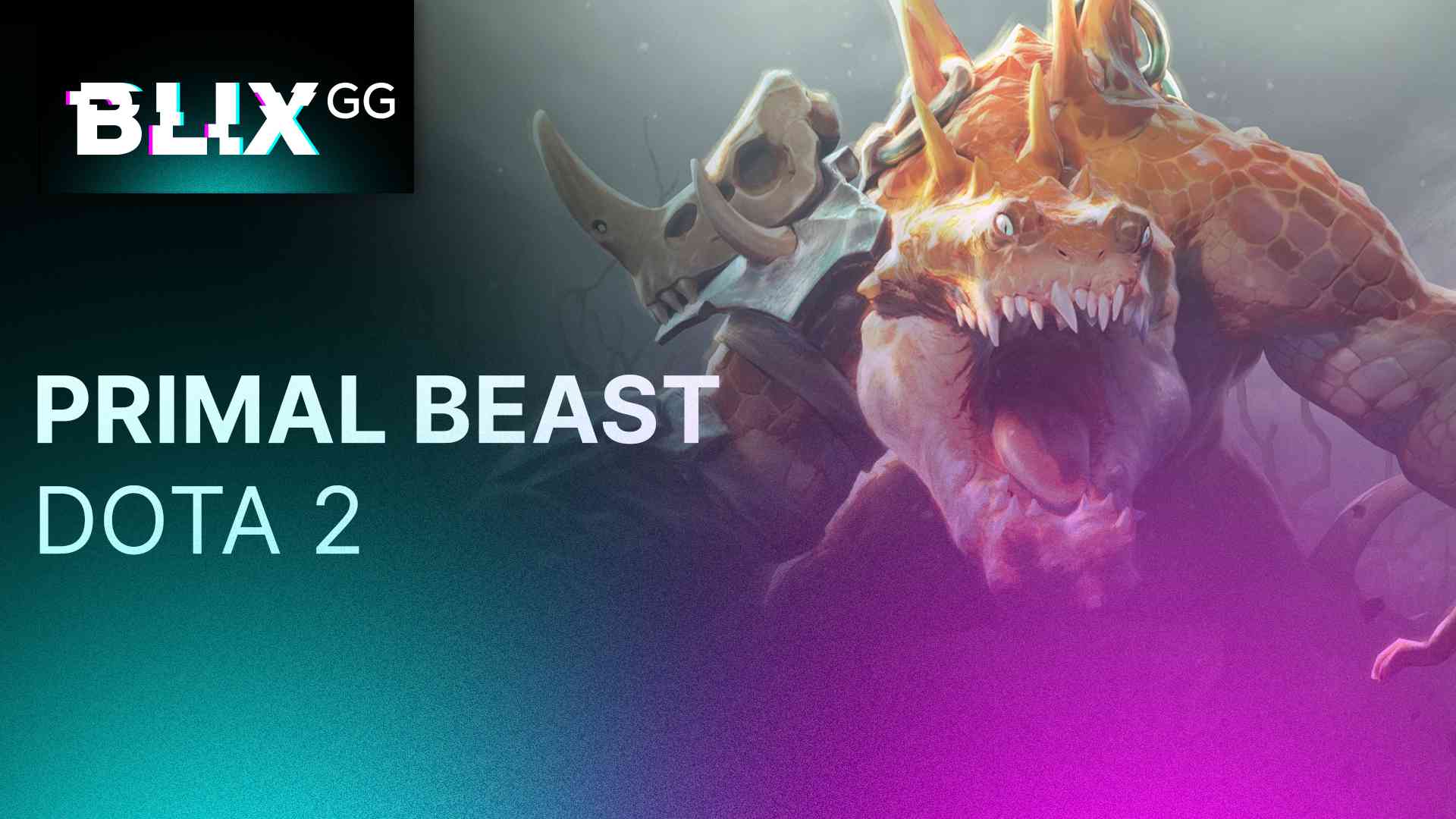 He's not an objective, thank god!

The long-awaited moment has arrived! More than a hundred days have passed since the last major patch, Dota fans were exhausted by the anticipation, and Valve finally blessed us with a new update. Many exciting things happened here: neutral creeps were reworked, Valve corrected the map, new artifacts were added (basic and neutrals), Techies has been revised (by the way, you can read about it here; we wrote a small guide on the updated hero) ... But the main character, who was teased over the past few days, naturally, became Primal Beast.

Before the release of 7.31, the media and Dota fans almost unanimously trumpeted that Primal Beast would become a new objective on the map: a second Roshan-like spot with a mini-boss that would allow your team to push lanes. A la League of Legends with their drakes and barons. Thank God the Dota 2 gameplay fundamentals weren't broken, and we just got a new hero! Let's see what the strength of Primal Beast is and how to play it.

In short: Primal Beast is the purest pos3 offlaner, bursting into the crowd and focusing on one target. Great for beginner Dota players! 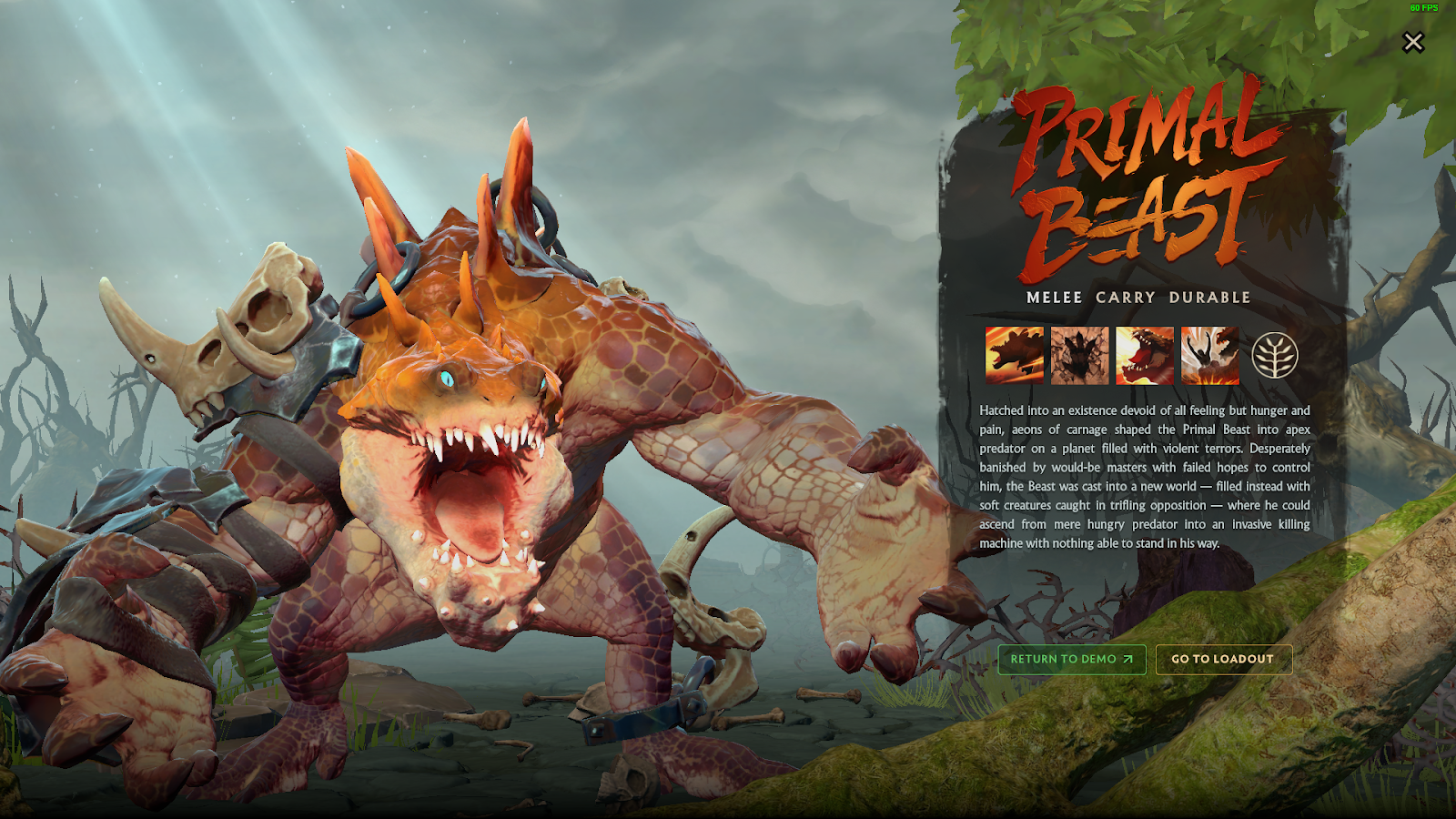 Valve released a fairly easy-to-learn hero, perfect for beginner offlaners. Primal Beast is the quintessence of pos3 gameplay: initiate a fight, confuse everyone, stun everyone around, deal damage. Will you survive—not very important, because the main task of position three is to divert attention, create chaos and try to kill at least one target, giving control over the rest.

In general, the latest heroes in Dota are pretty flexible in terms of position and builds. However, don't think that Primal Beast's carry potential is very high. His talents do not imply the build of damage-dealing artifacts; his abilities are aimed at control and depend on the context of the fight: Uproar, his E button, is activated only after receiving damage, so there is no point in standing aside in anticipation of a battle. On the contrary, you need to jump into it first. We kindly ask you not to take PB as a pos1 carry! Yes, it can be broken at first and will kill and allow you to gain MMR, but this is not what it is intended for!

Once again, the main task of Primal Beast is to burst into opponents and scare them.

In this guide, we will not try to reinvent the wheel or mess with the original idea: Primal Beast is an offlaner-initiator, and we will write about this.

Briefly about the skills of the new hero:

Everything is quite simple here. Onslaught is needed to run away or attack when the situation requires, so get it at the first level: you can do first blood or hide from enemies until the laning stage starts. Uproar is needed to defend the lane well, getting additional armor and slowing down the opponent. Two in a row will allow you to do better in the laning stage. Trample is also helpful, but only if you are dominant and the combo of heroes on your lane allows you to jump and kill enemies without consequences.

Since Primal Beast is a tank, taking magic resistance and additional armor from talents is better. Decide on 20 and 25 level talents according to the situation.

Well, you should just get bulky and tanky with Primal Beast.

Laning buy as is follows:

In the midgame, try to go to Phase Boots and Vanguard first, then Sange and Yasha or Black King Bar. Also, Blink Dagger would be helpful (help you become a real pain in the back).

In the late game, this would be ideal:

Due to the significant increase in strength (4.3 per level), you will be very thick and will be able to jump with an Overwhelming Dagger and deal massive damage.

How to play as Primal Beast

7.31 has brought us one straightforward hero to study and play, as if he was created for beginners.

Start with total lane domination. Remember, you have a lot of HP and solid skills for attack and aggression. But don't overdo it!

You can even gank mid if the mid laner has crowd control. A dash for 2000 units of distance is a lot: hide in the jungle while your mid-laner lures the opponent, and then burst into them and grab a frag. You can win mid and, accordingly, the game by simple stuff.

In the midgame, you need to be the team's voice and encourage everyone to take action. Together with your support, get a smoke, gather one or two more teammates, and gank and kill. Now is your time to flourish. You are powerful after 15-20 minutes, and your best bet is not to farm creeps for artifacts but to play aggro, attack, and map control, creating space for your core.

In the late game, the hero gets weaker. Due to the low agility gain, it will be challenging to compete with natural carriers like WK, Spectre, Medusa, Drow Ranger, etc. Here your task is to rush forward, grab the enemy core/mid-laner, turn them off for a short time and let the team kill the rest.

How to counter Primal Beast

It's simple: buy a BKB and set up vision. PB's abilities do not work through magic immunity, and good warding will help to avoid unnecessary fights and losses.

Overall, we've got a great hero for newbies that symbolizes aggressive play and the essence of offlaner initiators. An endurance fighter who just needs to jump in to the crowd and turn off the strongest opponent, that's what Primal Beast is about. Also, to catch up with someone who's running away and give a lot of control and burst damage.

Unfortunately, PV drops in effectiveness after the 45th minute, but this does not mean it becomes useless.

Pros: survivable and robust initiator with control and damage