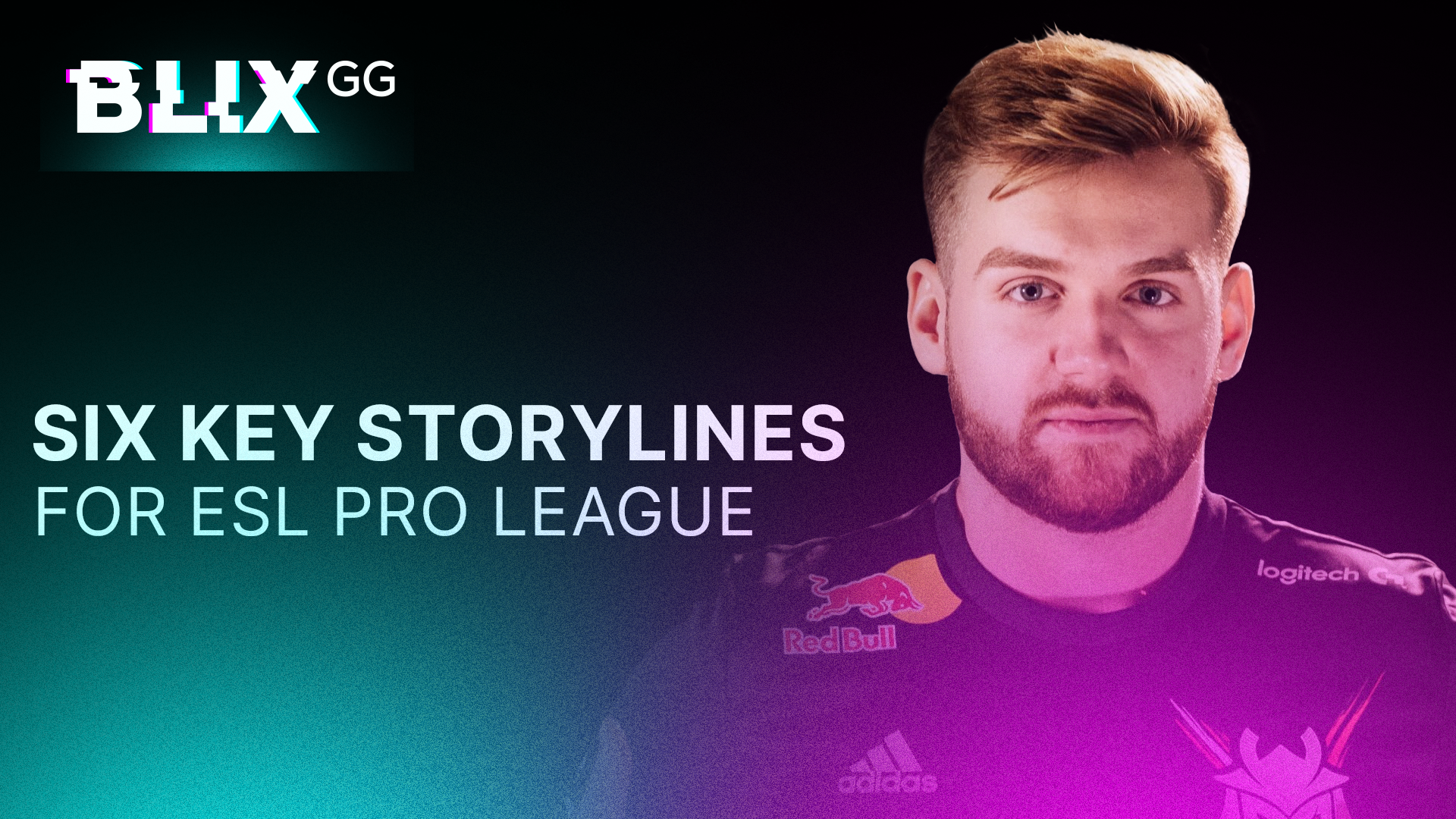 Never-before-seen rosters, players at risk of being cut, and lineups looking for redemption are the standout headlines heading into Group A of ESL Pro League Season 15.

ESL Pro League Season 15 will soon be upon us, being the first event since the thrilling culmination of IEM Katowice 2022 - which saw FaZe take their first trophy since IEM New York 2020. As always, the Spodek Arena provided the Counter-Strike scene with an incredibly memorable competition. The final of IEM Katowice 2022 was the most-watched non-major CS:GO match in history - with 1.12 million people tuning in to watch the broadcast.

With more eyeballs on the Counter-Strike scene than ever before, the sheer hype and excitement levels are through the roof. ESL Pro League Season 15 will hope to continue this, with a contest that will run for a month, providing consistent Counter-Strike action throughout. There are four groups, each containing six teams - so let’s delve into some of the most compelling storylines to follow throughout Group A.

G2 is looking for redemption after a lackluster final

G2 Esports’ ambitious roster moves over the winter break have certainly created immense amounts of excitement throughout the Counter-Strike community. As stated, IEM Katowice 2022 was the most-watched non-major tournament in the entire history of the Valve game, and G2 Esports’ playoff matches were the top three most-viewed matches at the event as a whole. Their fanbase has grown massively since the signing of Ilya “m0NESY” Osipov and Aleksi “Aleksib” Virolainen - with expectations for the lineup being set exceptionally high.

The European superteam made the final of IEM Katowice and were the favorites to take home the trophy coming up against FaZe squad with Justin “jks” Savage standing in for the COVID-19 stricken Håvard “rain” Nygaard. Without the presence of Remy “XTQZZZ” Quoniam behind them, who also contracted COVID-19, G2 crumbled under the pressure of the tumultuous crowd of the Spodek Arena - leading to an eventual 3-0 defeat. Nikola “NiKo” Kovač and his men will have left Poland with a sour taste in their mouths and will look to seek redemption heading into ESL Pro League Season 15.

A further kick to the teeth for the European squad came earlier today, when it was announced that Aleksi “Aleksib” Virolainen would be sitting out the beginning of the event due to a positive test for COVID-19. Taking his place will be François “AMANEK” Delaunay, who recently stood in as a coach for Remy “XTQZZZ” Quoniam during the playoffs at IEM Katowice 2022. Even with this news, this G2 team is packed to the brim with world-class superstars. Especially given the immense motivation they must have after their disappointing finals against FaZe, they still look like the front runners to top Group A.

The addition of Owen “smooya” Butterfield on trial in October of last year triggered a tremendous upswing for the British organization. Alex “ALEX” McMeekin and Co managed to look competitive at IEM Katowice despite starting poorly. They qualified for the main event through the Play-In stage and won against eventual finalists G2 Esports.

They exited the tournament in a respectable 9-12th place, but what followed took the Counter-Strike scene by surprise. The benching of fan-favorite Owen “smooya” Butterfield upset most Fnatic fans and was odd as the Brit was the team’s second-best rated player at the main event. A poor event for his standards, but not bench-worthy in the eyes of many in the Counter-Strike space.

Owen “smooya” Butterfield was replaced by the up-and-coming Romanian AWPer Iulian “regali” Harjău from their academy - Fnatic Rising. In his tenure with the academy squad, the young AWPer managed to amass a 1.15 rating according to HLTV despite a lack of team success. I expect an overall decrease in the level of performance from the now international lineup due to the experience Owen “smooya” Butterfield had to play at the highest level, but Iulian “regali” Harjău certainly has potential and can grow into a phenomenal player.

Another question mark for the Fnatic side is Ludvig “Brollan” Brolin, who has not played with the team throughout the Open Qualifiers for the PGL Antwerp Major RMR. This is due to supposed interest from Ninjas in Pyjamas, who have reportedly made a bid for the young Swede. Peppe “Peppzor” Borak will be in his place, making the step-up from Fnatic Rising. With roster uncertainties and struggles at the RMR Open Qualifiers, Fnatic could well be in for a tough time here at ESL Pro League Season 15.

A bid for Brollan, somebody’s on the chopping block for NIP

One day after the announcement of the departure of Owen “smooya” Butterfield, a report from HLTV came to light stating that Ninjas In Pyjamas were preparing a bid in the region of €600,000 for Fnatic's teenage star Ludvig “Brollan” Brolin. Brollan would be a great addition to the Swedish organization, with the two-time Top 20 Player (according to HLTV) being one of the most consistent players from their region.

As of late, Ninjas in Pyjamas have been a difficult team to talk about as they are competing with a sub-optimal lineup. Love “phzy” Smidebrant continues to fill in, as blockbuster signing Nicolai “device” Reedtz remains sidelined due to health issues that have plagued the Danish AWP player since December of last year. The return of Nicolai “device” Reedtz will be a much-welcomed one for the Ninjas as they have found little success without him.

The news of the acquisition of Ludvig “Brollan” Brolin will create an exciting dynamic inside the NIP camp. If somebody new comes in, somebody has to leave, and certain players may be playing for their spot on the team during ESL Pro League Season 15. For me, it seems like it will either be new recruit Patrick “es3tag” Hansen or Nicolas “Plopski” Gonzalez Zamora who will make space for the Fnatic rifler, as both have been underperforming to start 2022. This added motivation could produce good results for the Swedes; who knows?

Over the winter period, MOUZ underwent a complete overhaul of its Counter-Strike division. They promoted both coach Dennis “sycrone” Nielsen and AWPer Ádám “torszi” Torzsás and brought in veteran player Nathan “NBK” Schmitt to round out the roster. Despite the German organization’s efforts over the break, they are yet to play an official game with their new five-person lineup. This is due to a positive COVID-19 test result for Aurimas “Bymas” Pipiras before IEM Katowice 2022, which saw academy player Jon “JDC” de Castro be fielded in his place.

Even without the entirety of MOUZ’s 2022 project, they looked incredibly exciting to watch at IEM Katowice. Ádám “torszi” Torzsás looked like a revelation - winning impressive clutches and performing brilliantly at the highest level. Nathan “NBK” Schmitt, even after taking a small hiatus to play Riot Games’ VALORANT, looked his best - it was great to see. If Aurimas “Bymas” Pipiras can replicate some of the heroics of academy player Jon “JDC” de Castro, MOUZ can undoubtedly challenge for the top spot in Group A.

Entropiq aim to rectify their recent downturn in form

Entropiq started 2022 ranked ninth in the world; they were the in-form team, who looked like they were finally going to break into the world’s elite. So far this year, Dmitry “hooch” Bogdanov’s men have been relatively unsuccessful. The majority Russian squad entered both the Pinnacle Winter Series 2 and the Elisa Invitational Winter 2021 as the highest-ranked team - falling at the first hurdle in both competitions, to BLUEJAYS and ENCE, respectively. A second-place finish at the hands of Gambit at Funspark ULTI 2021 was a dignified result but a poor start to the year - which saw them head into the Play-In stage of IEM Katowice 2022 with a point to prove.

Entropiq was the fourth highest-ranked team at the Play-In stage, which saw the top eight teams advance to the main event. Aleksei “Nickelback” Trofimov and Co started slowly, falling at the hands of ENCE in the initial best-of-one, which saw them drop down to the lower bracket. They picked up a commanding series win over Renegades but then fell short - getting crushed by a MOUZ lineup without a complete roster. Entropiq is a seriously skilled bunch of players who dominate at a tier two-level. However, if this team wants to be taken seriously among the best Counter-Strike offers, they need to prove themselves at one of the biggest tournaments on the calendar. Where better than at ESL Pro League Season 15?

Can Looking For Org find themselves a home?

Australiasian squad Looking For Org enters Group A as heavy underdogs. They are ranked ninety-six globally, and the next lowest is Fnatic, which is ranked number sixteen. The disparity in rankings may cause the Australians to be out of depth in this group. However, given some fortune, they have a severe chance at going toe-to-toe with some of these slightly weakened rosters.

The Aussies have no pressure and are expected to finish bottom of this group. This could, and most likely will, happen, but any wins would put themselves in the shop window for any potential organizations looking for a new lineup. The likes of Euan “sterling” Moore and Jared “HaZR” O’Bree dominate in their region and would be an enticing prospect for any smaller organizations in the Counter-Strike scene. As their name suggests, they are looking for one thing - a place to call home. Any sort of success here at ESL Pro League Season 15 would aid their search.