T1 Oner: “Even though we finished first, we have to make sure that we don't get ahead of ourselves.”

What else is there to say about T1 when it comes to their appearance in the League of Legends World Championship? For starters, a quick overview of their international accolades should serve as a clear indicator of their searing greatness. Three world titles, two Mid-Season Invitational wins, and nearly a dozen League Champions Korea (LCK) domestic trophies, all of which were gained through the help of a transcendent mid-laner in Faker.

No matter where they are, T1 is always seen as a major competitor who holds a more than decent chance of becoming the eventual winner. As such, this 2022 World Championship has seen the same kind of expectations play out for one of the game's most popular teams.

When one is a part of a major team like T1, they are accompanied by a great amount of pressure to continue performing as well as they can in order to continue their franchise’s track record of excellence. But as far as T1 is concerned, with its current iteration, it looks as though not a single member has struggled in handling such pressure. Of those players in the T1 lineup is jungler Mun “Oner” Hyeon-jun, who, despite being in the second year of his professional career–all the while being tagged as a top prospect with the potential of being one of the next best junglers in the LCK, helped the team secure first place in Group A by winning all three of their matches in the second round-robin, beating reigning world champions Edward Gaming and North America’s Cloud9 as well in the process.

Already a player with enough international experience to rival the best players of other regions –he made the semifinals of Worlds 2021 as a rookie– Oner hopes to steer T1 to yet another world title and help reassert their dominance just as the team did more than a handful of years ago.

With the first seed of their group secured, Oner spoke to BLIX.GG for an interview discussing their 3-0 outing on the final day of group play, how he has maintained his confidence in his second year as a professional, and which team he has been most impressed by in Worlds.

Pedro Romero, BLIX.GG: A 3-0 finish to the group stage gives T1 first place in Group A. I'd like to know your overall thoughts on the team securing first ahead of the knockout stage.

Mun “Oner” Hyeon-jun: Before we started our day, we all huddled and talked about how our goal was to finish groups as first place and I think that is why we got the result that we wanted today. I'm fully aware that all the other first and second-place teams for the other groups will be very powerful teams. Even though we finished first, we have to make sure that we don't get ahead of ourselves. We are definitely planning on preparing for our future matches while watching the next matches that are coming up soon.

BLIX: Taking a look at your other teammates' performance throughout the group stage, Zeus performed pretty well, especially in that final match against EDG. The same goes for Gumayushi who only died a handful of times in the six matches the team played. What do you think of those players' performance in particular so far as this group stage has transpired?

Oner: My entire team has faith in me and I also have faith in my teammates. We all know that we're very skilled players and I think that's what brought such a fruitful result today. I knew that they were both going to play really well. I'm not sure if I have any particular thoughts about them apart from what I originally believed in them.

BLIX: How has the meta in the jungle position transpired and evolved throughout this competition?

Oner: For the jungle meta in Worlds, for us in particular, I would say that the Sejuani and Maokai picks are something that is really important in terms of protecting the team. I would say that the meta currently is a little odd--maybe a little different and unique in its own way. Moving forward, I feel you will start seeing a lot more carry-type champions. 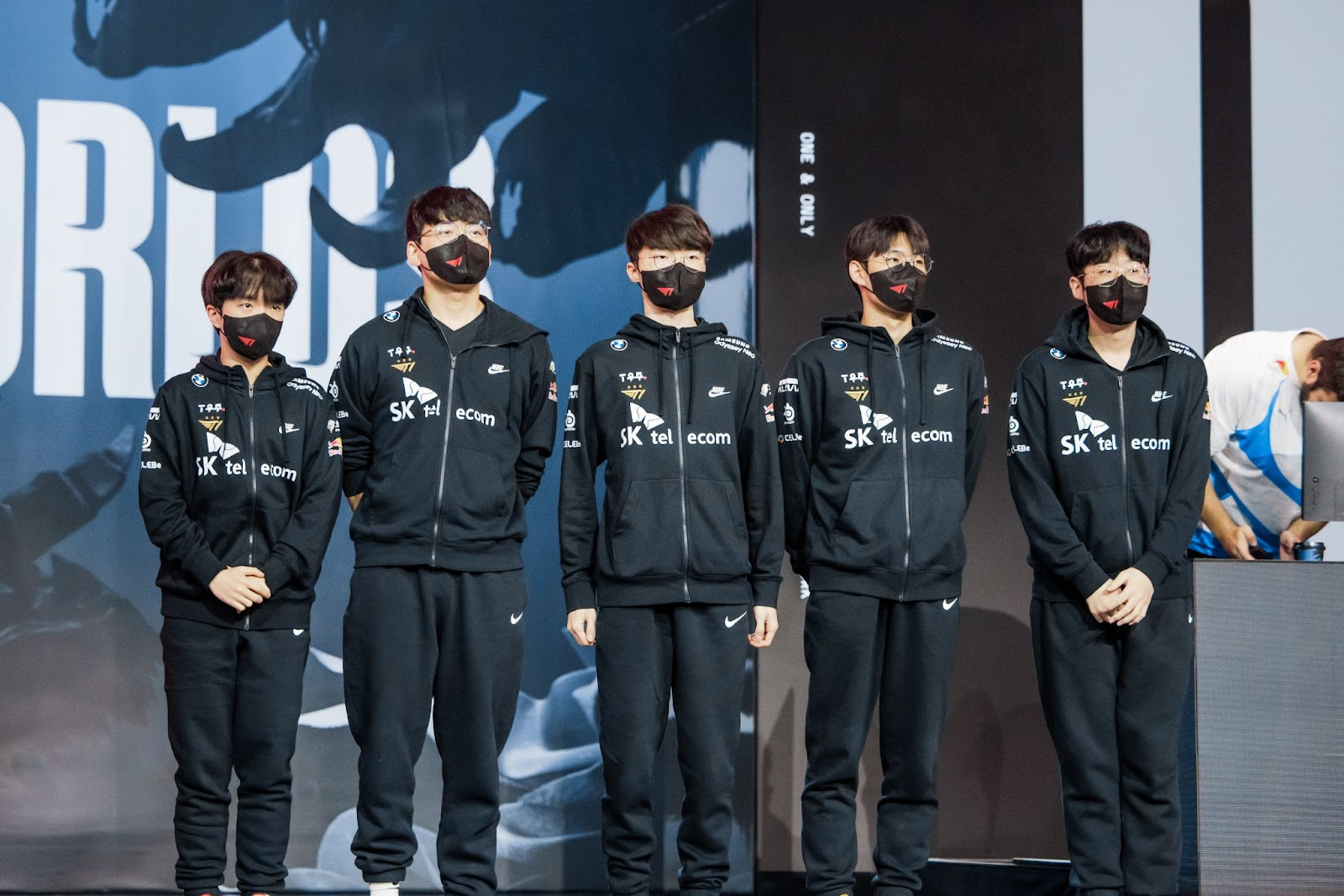 BLIX: Taking a look at your career, you return to the World Championship after making your debut appearance last year as a rookie. To be a part of a team that is known to be the favorites towards lifting the Summoner's Cup, how have you sustained your confidence as a player throughout this year in particular following your rookie year?

Oner: I firmly believe that everyone who is currently participating in Worlds is very talented. To make sure that I stay ahead of them and ensure I play better than them, I always have to keep up with playing solo queue and practice to maintain my skill level or even improve myself. We'll also try new things during scrims, and of course, I had a lot of successes and failures. Whenever I do succeed in trying new things during scrims, that excited feeling that I get also contributes to increasing my confidence. The main thing is since my team is so good at the game, I feel the more that we play together, we will actually gain even more confidence.

BLIX: By finishing first in your respective group, you guys have the luxury of surveying the rest of the competition for your next opponent in the knockout stage. Which teams have you been most impressed by so far in the event? And who would you like to face in the knockout stage?

Oner: In terms of LPL and LCK teams, we've been seeing them a lot in other tournaments and this competition overall. Since we have experience watching them, I don't know if there was any team that stood out particularly or that I was impressed by, but I would say that for this Worlds, I was pretty impressed by Rogue. As for the rest of the groups, I'm not sure who will make out to be the first and second-placed teams, but I still believe every team in every group is very strong. No matter who makes it out, we just have to make sure that we're prepared and we play well.