The Failures in Preparation and Production at Masters Reykjavik 2022

VALORANT esports’ fourth ever international LAN took place in April 2022, and with a whole year of competition behind them, fans were looking forward to the first prestigious event of the year. Riot Games has been good so far at producing their LAN events, and excitement was on the plate. But what Riot has shown throughout the event, left many questioning if the company actually downgraded from last year’s showings at Iceland. From HUD failures, questionable rulings, to unfair match scheduling, take a look at Riot’s shortcomings at Stage 1 Masters Reykjavik 2022.

This year’s Stage 1 Masters incorporated a new tournament format. Where previous tournaments had a single-elimination playoffs, this year’s Iceland Masters had a double-elimination playoffs bracket. This came with the decision that the winner of each major region’s Challengers is placed in the playoffs. Previously, all the teams played in a group stage to decide which teams moved on to the bracket stage.

Even some players themselves are critical of the change. During a post-match press conference in Iceland, OpTic Gaming’s in-game leader Pujan ‘FNS’ Mehta criticized the format.

“I think every team should have to play group stages and earn their spot in playoffs,” FNS said. “But that’s not the fault of the teams or anything. I just think it’s a terrible format in that sense. They should not do that.”

On the other hand, FNS’ teammate Jaccob ‘yay’ Whiteaker had a more positive take, stating that there are advantages to being in the group stage, and to being seeded straight into playoffs.

There’s nothing wrong with using a new format. Organizers should do what they believe is best for the event. But the failures came in its implementation. According to different sources, OpTic and The Guard players only knew mid-series, that their “seeding match” to become NA Challengers champions, meant skipping a whole Group Stage.

The Guard’s coach reveals the team didn’t know their seeding match would place them straight into playoffs. 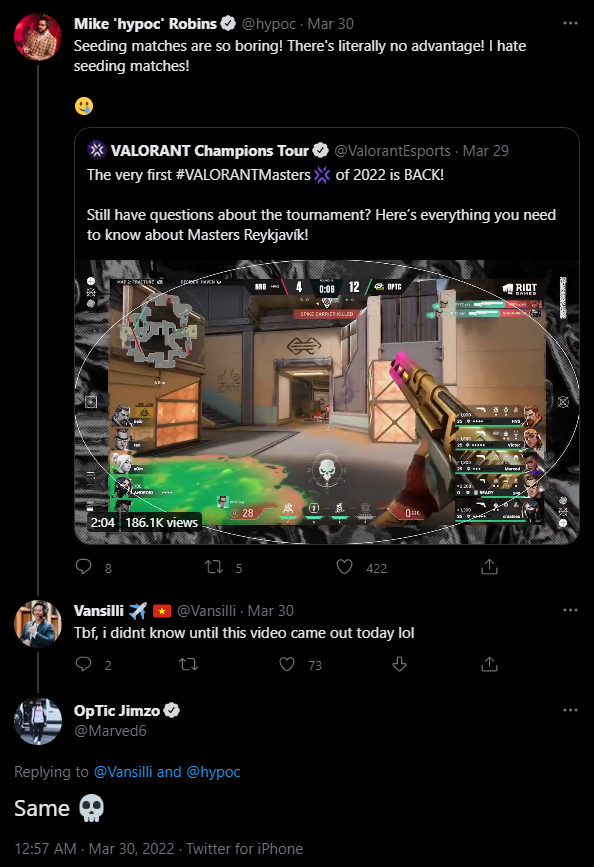 Whether this was the fault of Riot’s communication or the fault of the teams themselves is a different story. But the fact that not everyone on these teams was aware is disappointing and shows a lacking presence of the tournament organizers.

Another issue with this new format was the scheduling. To keep competitive integrity, most tournaments of this level make sure participants have enough rest between their matches. This is usually done by making sure no team played two, three, or four days in a row. Though depending on different circumstances, two matches in two days is acceptable.

The problems came with the scheduling of the Japanese team ZETA DIVISION.

Japan’s sole representative ZETA DIVISION started in the group stage of the event. They played in Group A, together with EMEA’s Fnatic, Brazil’s Ninjas in Pyjamas, and Korea’s DRX. ZETA DIVISION’s loss in their opening matchup against DRX meant they had to play Fnatic in an elimination match. This match would take place on Day 3 as seen on the schedule below. ZETA DIVISION would beat Fnatic in that series. They then had to play Ninjas in Pyjamas on Day 4 as a decider to qualify for the bracket stage.

These are now two series played in a row by the Japanese side, which became three after they beat NiP on Day 4. Thanks to their win, they qualified for the bracket stage, where they would get matched up against EMEA’s top seed G2 Esports. This meant that ZETA DIVISION had to play on Day 5, making them the only team in the event to play three days in a row. And not only that, but they were also the first match of the day during Day 5. And as the icing on the cake, the matchups for the first round of the brackets stage were announced before ZETA’s qualifying game against NiP, giving ZETA almost no time to prepare, and G2 all the advantages. 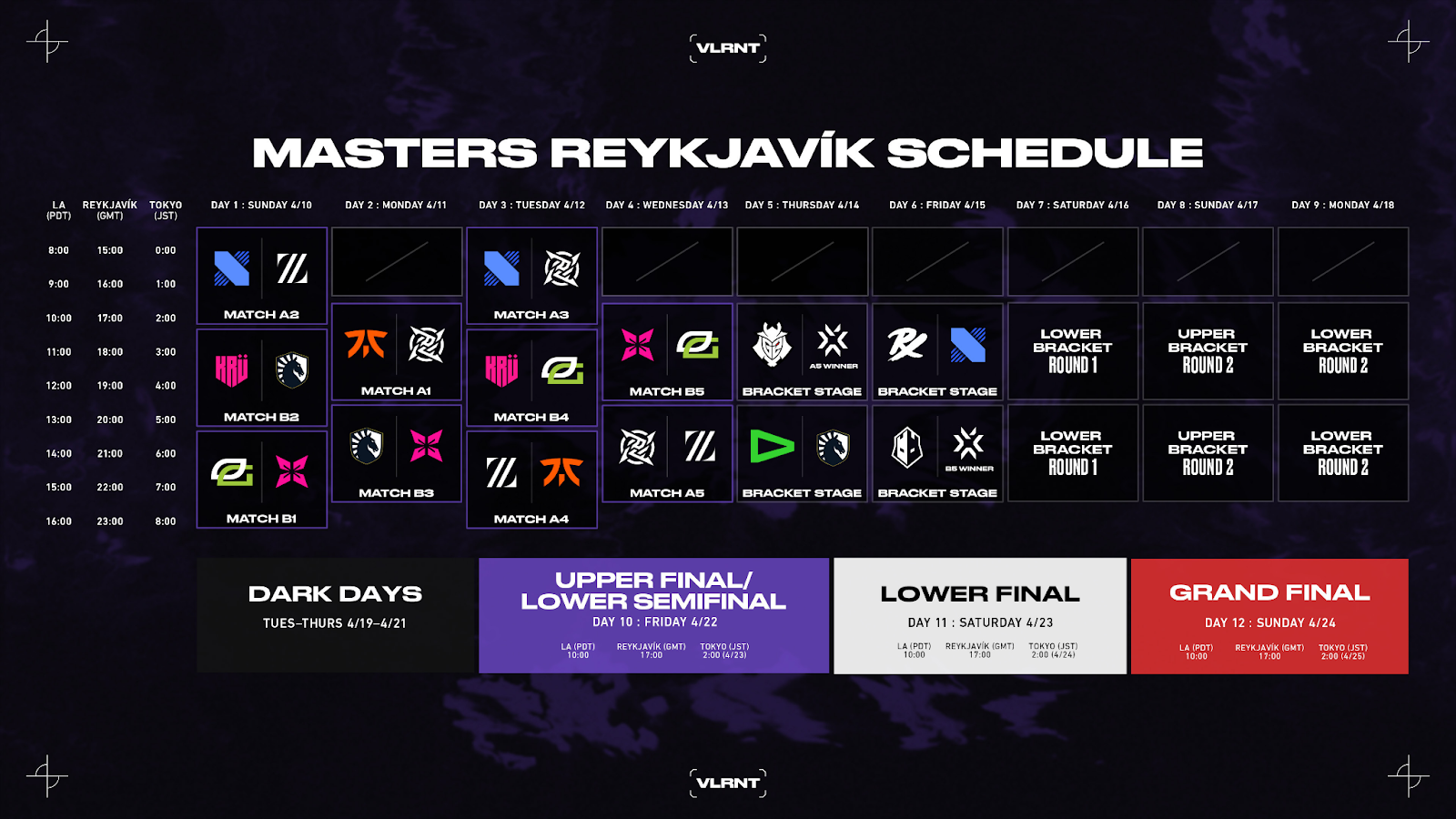 Including what was previously mentioned, this is unfair for several other reasons and stains the competitive integrity of the event.

As explained by Team Liquid’s head coach Connor "Sliggy" Blomfield on Twitter, the announcement of the matchups gave G2 an extra day to anti-strat their opponents, having been narrowed to either NiP or ZETA DIVISION.

Despite the setbacks, ZETA DIVISION would make a deep run in the tournament, reaching the lower bracket finals. They would eventually lose to NA’s OpTic Gaming, but made history nonetheless, being the first Japanese team to qualify for playoffs in a VCT Masters event.

It is also worth noting that the best-of-five lower bracket finals series happens the day before the best-of-five grand finals. Meaning it was technically possible for a team to play 10 maps in 2 days.

The most unusual tech issues

Stage 1 Masters Reykjavik 2022 is a $675,000 USD tournament. It is one of the most prestigious events in the entire esports scene. This is why some of the technical issues encountered during the event were highly confusing to fans, talent, and players alike. The most notable example would be on Day 6 when Paper Rex (PRX) matched against DRX.

The series started with a sudden pause after a fourth-round win by DRX. But before the pause, it was seen on the stream that for a short period, there was something odd with “Wang Jing "Jinggg" Jie”’s movement, whether it was a PC issue or just a human decision wasn’t clear right away. But when the round was replayed, it was then mentioned that a tech issue on PRX’s side was the cause.

Later in the same match, it was then DRX who faced a technical issue, which led to round 18 of Haven being replayed. These were confusing rulings, as what is normal for these types of scenarios is that rounds can no longer be restarted once a player has taken damage.

BuZz lags out and tarik calls for fair ruling

At that point, the end result of the round should be final since damage has been done. But without an easily accessible public rulebook for these events, it is hard to make the public aware of the proper rulesets for situations such as this.

Kim “stax” Gu-taek in a post-match interview explained the several problems the players faced during their match against PRX.

S: There’s so much to talk about.. firstly, the desktop background kept popping up (they kept getting alt-tabbed).

S: When Rb dashed, he would get bounced back to the desktop background.

S: It happened three times in a row. BuZz also kept getting it, and it also kept happening to Zest while he’s defending A.

S: Also for me, if I got in range of the opponent Sova’s recon dart, the recon information (yellow indicator) is not shown on my screen.

S: So I kept getting scanned. It couldn’t be helped.

C: Ah.. I’m sorry. We didn’t know that such situations were happening. We couldn’t see the window.

S: -to the point where I gave up on Haven and didn’t really play it. But while playing, I thought I could win. But I was so mentally and emotionally upset that I couldn’t concentrate. I think I was a little more focused on the second round.

The Sova glitch mentioned is a glitch in the patch that Masters Reykjavik is currently being played on. Team Liquid’s Dom "soulcas" Sulcas demonstrated and explained this glitch in a Tweet: “You do not get a notification that you will get scanned by the arrow before it hits you”.

A glitch like this is game-deciding and can be expressed as nothing but unlucky to any of the players who were affected by it.

The PCs at the event were also confirmed to be higher spec than those at last year’s VALORANT Champions - the 2021 VALORANT World Championships.

This situation once again stains the competitive integrity of the event. But at the very least, these seem to be the worst that happened. But that doesn’t mean they were the only problems Riot had at Iceland. There were several other disappointing problems, particularly with the production and livestream.

Without a live audience to attend and watch the tournament, the official livestreams and watch parties are the only ways to follow the tournament. This is why it is truly important that the stream production is good, clean, and understandable. A few simple errors can leave both fans and broadcast talent confused. This lessens the quality and viewing experience. A less than ideal scenario considering there are only three VCT LANs this year.

And yet, for the first few matches of the event, the official HUD would often be delayed, wrong, or just broken. Plus sometimes audio would cut out, replays would be cut short, or replay twice. And to make things even worse, the player cams would disappear several times in a match, which greatly reduces the energy and hype viewers would want to see from players in a LAN match.

"This is Valorant's 4th lan, it's slowly feeling like it's worse than the 1st

It genuinely feels like Riot's eSports division has regressed (budget cuts maybe?), the stage is worse than the previous Reykjavik event, the coaches are in a basement in the middle of nowhere, there is no cohesion between the desk, the casters and the stage.

And then we get to the production, there have been so many tech pauses, so many random UI glitches, no player cams, wrongly shown player cams, no sound when playing clips, clips not being played entirely, etc, etc, etc...

This isn't excusable anymore, Riot is worth multiple billions of dollars, they're the company behind the world's biggest eSport (LoL), and we're now almost two years into Valorant's eSports scene.

The general community around competitive Valorant at the very least deserves an explanation as to why the event is being handled so badly.

Viewers have gone on to describe this event as even worse than Riot’s first VALORANT LAN. Again, this is their fourth-ever LAN, which makes these mistakes all the more unacceptable, and the public response all the more justified. 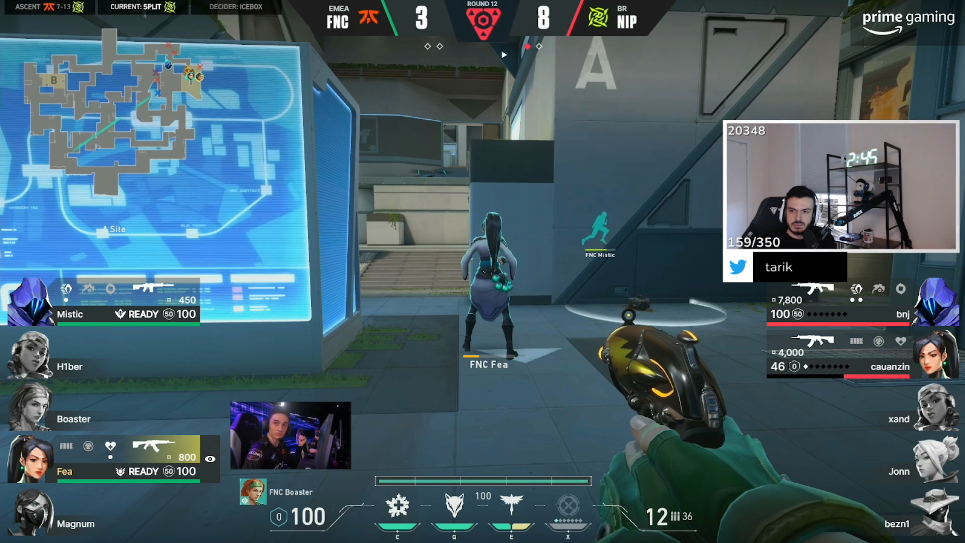 As seen in this screenshot, the HUD shows several mistakes - bnj and cuanzin had already died over 5 seconds before this but they are still shown as alive. The observer is on Boaster but Boaster is shown as dead.

"As a caster it really messes me up because I say its a 1 vs 2 and appears to be a 5vs5 because the hud didn't refresh. Same appeared in the first Masters last year.

In this screenshot, the indicators under the team scores had disappeared. The indicators are to show which team has won which map.

For example, the screenshot above shows NiP with a one map victory, thus one of the diamonds under their round score is filled in red.

In this clip, the HUD of the official stream had disappeared, and the basic observer HUD was shown. Tarik resorts to adding his own text to his stream to avoid confusion for his viewers and for himself. 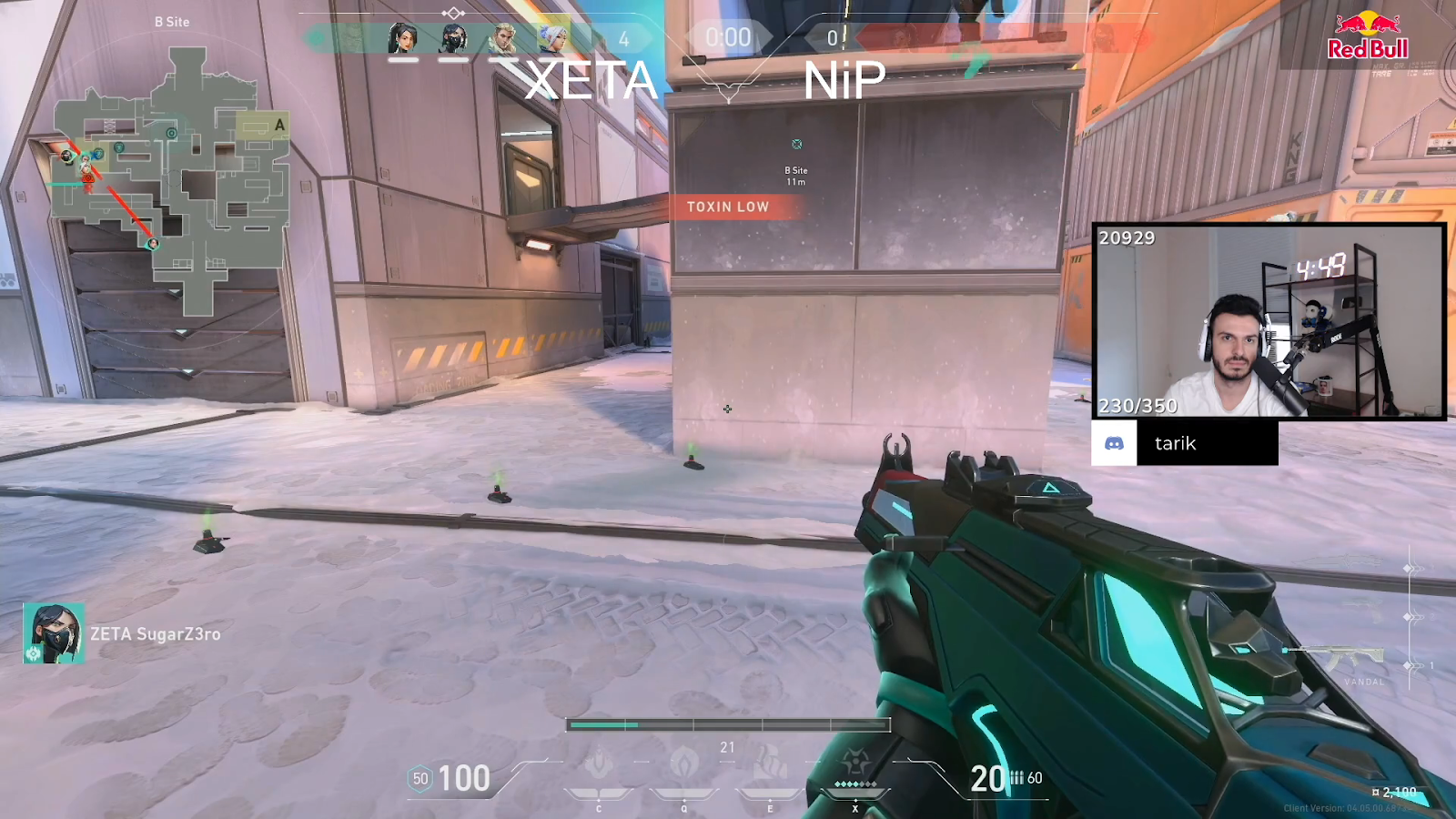 In this clip, tarik notices that FNS was named Finesse in the official HUD. 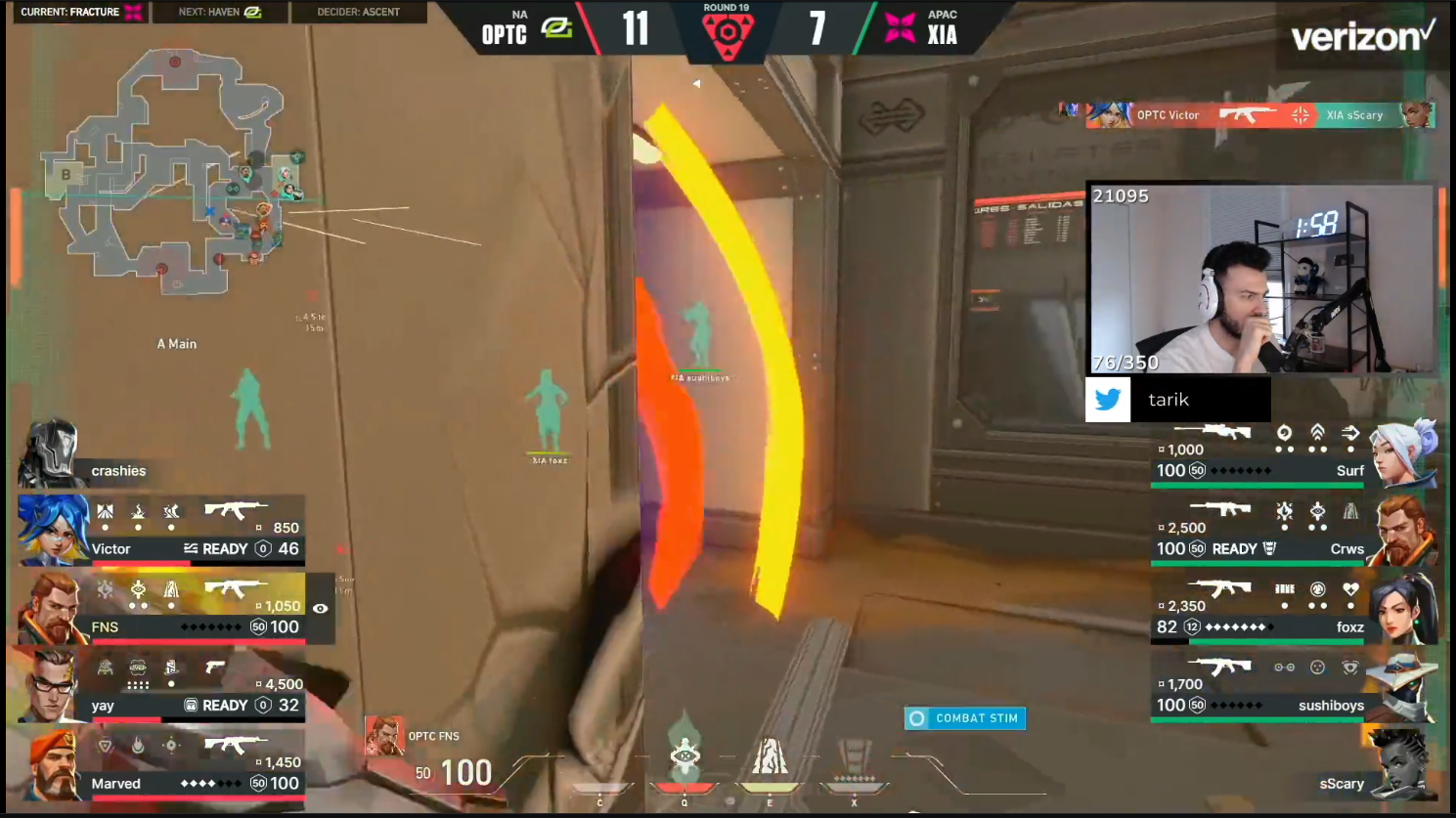 A Long Walk for Coaches

During the group stages, it was shown that coaches had to stay basically a whole building away from players. This was heavily criticized after this clip of ZETA DIVISION’s coach having to run for nearly a whole minute just to celebrate with his team. By then, their celebration and hype had died down, and the coach was tired from the long jog.

OpTic Gaming’s head coach initially brought light to this when he sarcastically thanked Riot in a tweet about being placed in a basement. He also revealed that the coaches were two floors below the main stage.