THE HISTORY OF CS:GO CASES (PART 2) 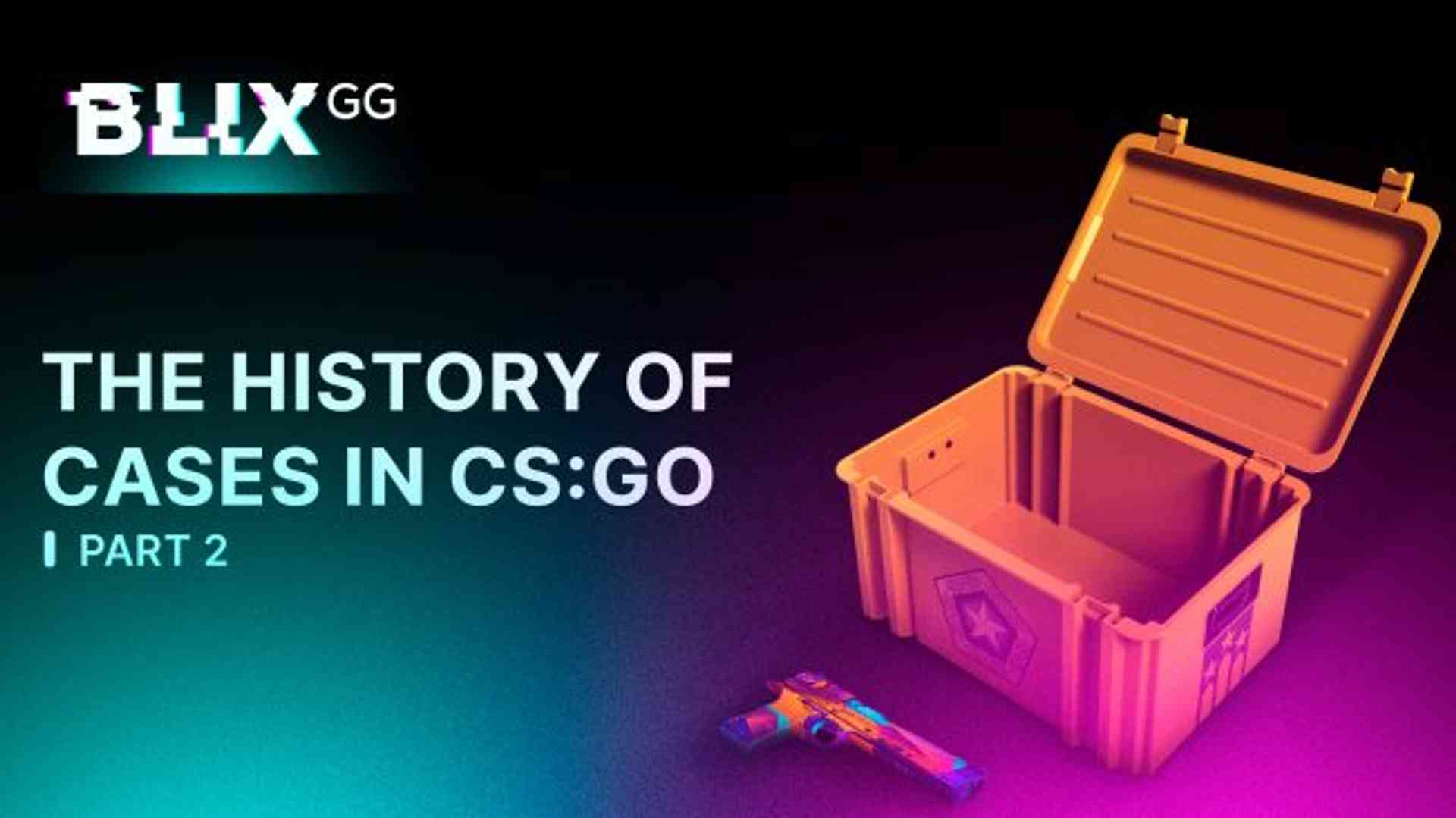 In the previous part of the history of CS:GO Cases, we reached September 2015, when the Shadow Case was released into Counter-Strike: Global Offensive. These years were important times for the Valve game as the Counter-Strike series found massive growth, which was aided by the introduction of skins and the trading community. The Shadow Case was followed by the Revolver Case in December of 2015, a case that introduced a new weapon into CS:GO.

The infamous and controversial Revolver Update introduced a new gun - the R8 Revolver. The case that came in conjunction with this update featured skins for this new gun with the R8 Revolver | Fade and the R8 Revolver | Crimson Web. Other skins include the M4A4 | Royal Paladin and the AK-47 | Point Disarray.

Operation Wildfire brought a new case with a new knife again being added. The Bowie Knife was newly implemented - a knife that was added mere months after the death of the rockstar David Bowie, who was named after the real-life counterpart.

The case featured significant skins like the AK-47 | Fuel Injector and the Desert Eagle | Kumicho Dragon.

The third iteration of the Chroma case was then subsequently released - again containing the Chroma knife finishes for the original set. The case featured some gorgeous skins like the M4A1-S | Chantico’s Fire, UMP-45 | Primal Saber, and the PP-Bizon | Judgement of Anubis.

A rare emerald pattern was also implemented akin to the sapphires and rubies of old. Highlights of this case were the M4A1-S | Mecha Industries and the Glock-18 | Wasteland Rebel. A contest was held for skin creators prior to this case’s release, and the winners (M4A4 | Desolate Space, AWP | Phobos, and PP-Bizon | Harvester) were added to this case.

A follow-up in the form of the Gamma 2 case was then added which contained the same knife finishes. Notable skins implemented were the FAMAS | Rollcage, MP9 | Airlock and AK-47 | Neon Revolution.

The Glove Case arrived on November 28th, 2016. A new cosmetic item in the form of gloves was added to Counter-Strike - something which the community have grown to like over the years. These gloves replaced the knives as the rare special item in the case and thus were very rare.

There were six types of gloves introduced, Hand Wraps, Driver Gloves, Moto Gloves, Specialist Gloves, Sport Gloves, and Bloodhound Gloves, which all had their own skins. The Glove Case also contained some well-renowned weapon skins like the SSG 08 | Dragonfire and the M4A4 | Buzz Kill.

The next case arrived in March of 2017 when the Chroma knife finishes were applied to the second generation of knives - the Butterfly Knife, Huntsman Knife, Falchion Knife, Shadow Daggers, and the Bowie Knife.

The Spectrum 2 Case had the same knife skins as the previous Spectrum Case - the Chroma finishes on the second-generation of knives. The best weapon skins out of this collection are the P250 | See Ya Later and the AK-47 | The Empress.

The Clutch Case introduced twenty-four new glove designs into the game, with a new glove type also being added - the Hydra Gloves. Some of my personal favourite gloves of this collection are the Sport Gloves | Vice, the Driver Gloves | King Snake and the Hand Wraps | Cobalt Skulls. In terms of weapon skins, the USP-S | Cortex and M4A4 | Neo-Noir took the spotlight.

The Horizon Case brought four new knife styles into the game in August of 2018. The Navaja Knife, Ursus Knife, Stiletto Knife, and the Talon Knife. These knives were given the original finishes, with the Night being renamed to the Night Stripe. The key weapon skin additions were the M4A1-S | Nightmare, the Desert Eagle | Code Red, and the AK-47 | Neon Rider.

The Danger Zone Update marked the introduction of a Battle-Royale game mode into the Valve game and with that, a new case entered the fray. This case contained the Horizon knife set with the fan-favourite gun skins being the AK-47 | Asiimov, AWP | Neo-Noir and the Desert Eagle | Mecha Industries.

The next case was the Prisma Case which again saw the Chroma finishes be applied to a new set of knives - the Horizon knives. The highlights from the Prisma Case were the AUG | Momentum, AWP | Atheris, and M4A4 | Emperor, which was later renamed to M4A4 | The Emperor in light of its counterpart the AK-47 | The Empress.

The CS20 Case was a commemorative collection to mark twenty years of the game franchise. The Case featured a new/old knife known as the Classic Knife, which was modeled off of the knife from games of old. The Classic Knife received the original knife finishes, and some of the skin highlights from this case were the AWP | Wildfire, MP9 | Hydra, and the FAMAS | Commemoration.

The Shattered Web Case was released for the Operation Shattered Web and added four new knives to the game, these being the Nomad Knife, Survival Knife, Paracord Knife, and Skeleton Knife - these knives were again given the original knife finishes. Popular skins from this container are the AWP | Containment Breach, MAC-10 | Stalker, and the Tec-9 | Decimator.

The Prisma 2 Case was a sequel to the original and contained the same Horizon knives with Chroma finishes. The case was released towards the start of the global COVID-19 pandemic and contained some lovely skins like the MAC-10 | Disco Tech, AK-47 | Phantom Disrupter, and the M4A1-S | Player Two.

The Fracture Case returned to the new Shattered Web knives, again with the original finishes. The Printstream skin was first introduced in this case, a weapon skin adored by the community due to its gorgeous use of Counter-Strike’s pearlescent skin feature. Noteworthy inclusions to this collection are the aforementioned Desert Eagle | Printstream, the Glock | Vogue, and the M4A4 | Tooth Fairy.

Operation Broken Fang brought a new case that implemented even more glove designs as well as its own Broken Fang Gloves. Some of my favorites added from this CS:GO Case is the Driver Gloves | Black Tie and Specialist Gloves | Tiger Strike. A sequel to the much-loved Desert Eagle | Printstream was added in the form of an M4A1-S | Printstream as well as the Glock-18 | Neo-Noir and M4A4 | Cyber Security.

This crate contained the same gloves as the previous case with new weapon skins made by the community. Some of the most well-renowned are the Desert Eagle | Trigger Discipline, Galil AR | Chromatic Aberration, and the USP-S | The Traitor.

In Counter-Strike: Global Offensive’s most recent operation, Operation Riptide, the second generation of knives were given Gamma finishes. The introduction of a Butterfly Knife | Gamma Doppler (Emerald) was something everyone was excited about. Aside from the new knife finishes, interesting skins like the MP9 | Mount Fuji, AK-47 | Leet Museo, and Desert Eagle | Ocean Drive rounded out the collection.

The Dreams & Nightmares Case was the most recent case to be added to the game in January of 2022. The case contained the same knives as the previous case, but for the skins, a special competition was held. There were seventeen skin slots available, and $100,000 was given to each winner of the competition meaning $1,700,000 was given out in prize money. The case had a spooky theme, and some of the best skins were the USP-S | Ticket to Hell, Dual Berettas | Melondrama, AK-47 | Nightwish, and the MP9 | Starlight Protector.

That is it, that is all the cases in Counter-Strike: Global Offensive’s long history, but it doesn’t stop at Weapon Cases. The Valve game has a wide range of other cases, from Sticker Capsules that contain stickers to be applied to your guns. There are also Souvenir Packages that contain weapon skins with player signatures and team stickers on - these are received during a Major Championship. It doesn’t stop there. There are Graffiti Boxes, Collectible Pin Packs, Music Kits, and even Patch Packs all waiting to be opened.