The new G2 - what HooXI and jks bring to the table 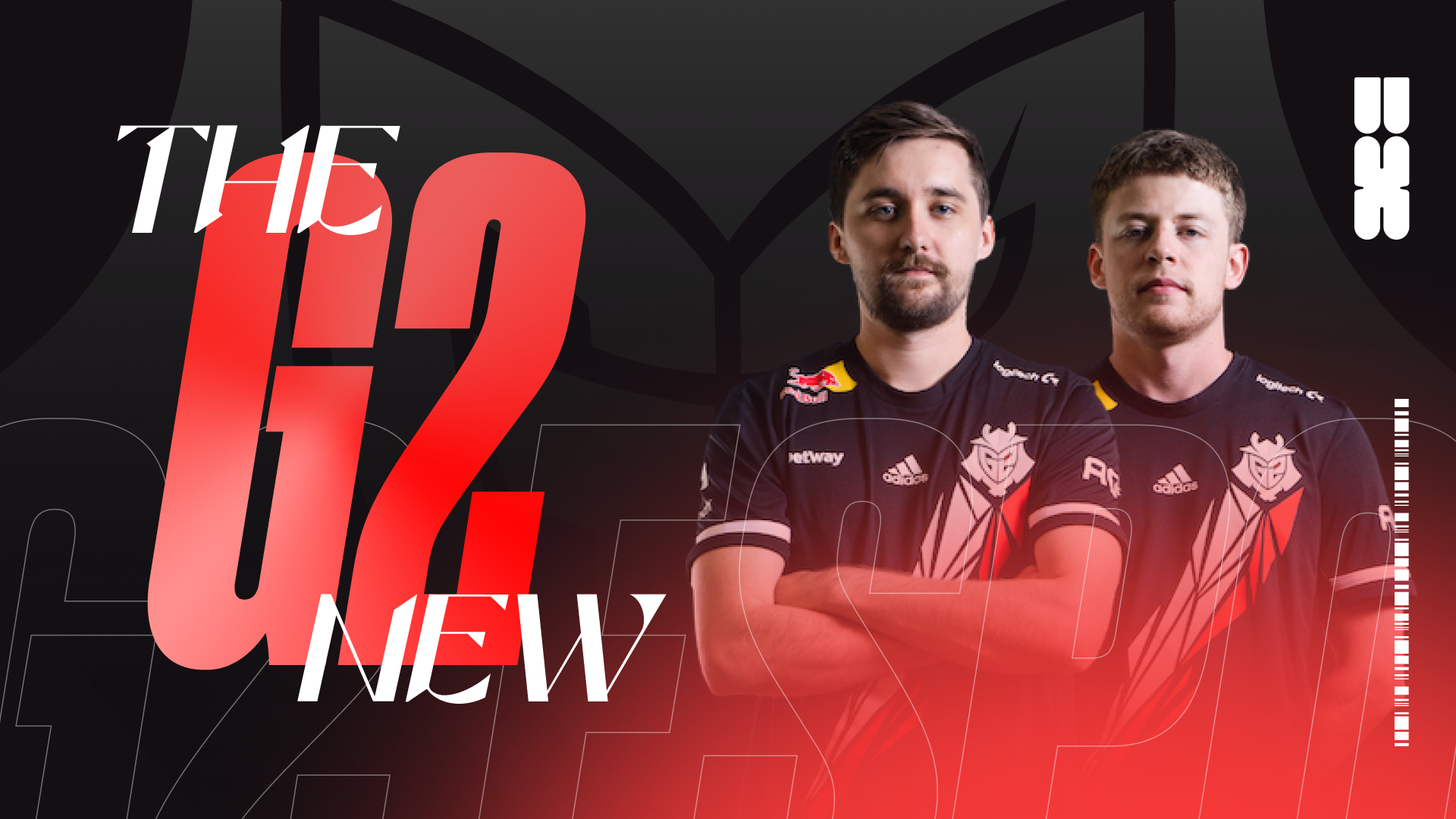 Out on their quest of world supremacy, G2 signed the seasoned Finnish leader Aleksi “Aleksib” Virolainen and the young Russian prodigy Ilya “m0NESY” Osipov at the start of the calendar year. However, expectations fell through for the international roster as they failed to make deep runs in big tournaments. A slew of disappointing results in ESL Pro League Season 15, PGL Major Antwerp 2022 and IEM Cologne 2022 ensured an upcoming overhaul in the off season. The latest addition to the team, Aleksib was the first on the chopping block as he was replaced by the 27 year old Danish IGL Rasmus “HooXi” Nielsen. Next in line was their longest standing member, the French spearhead Audric “JACKZ” Jug who departed the roster to make way for the Australian sensation Justin “jks” Savage. Along with exciting prospects, the new roster also brings some causes for concern with itself. Let’s take a look at the key elements of the new roster one at a time.

In a world dominated by Danish IGLs like Finn “karrigan” Anderson, Lukas “gla1ve” Rossander and Marco “Snappi” Pfeiffer, HooXi has made a name for himself after taking an underdog Copenhagen Flames to the playoffs of the PGL Major Stockholm 2021 and the PGL Major Antwerp Major 2022 when only few expected them to make it past the Challengers stage. While mad fragging is not his strong suit, the 27 year old Dane is considered to be effective in creating a system where his teammates are comfortable in their particular roles. In an interview with HLTV, G2's coach Rémy "XTQZZZ" Quoniam revealed that prior to the signing he had a dialogue with HooXi which assured the coach that he is the right fit for the team. According to XTQZZ, the roster with Aleksib didn’t work out as his vision didn’t fit the players. His system was more structured and lacked the freedom to allow the star players to shine. He believed that HooXi’s approach is more in line with what the team needs. Thus it is expected that the new G2 roster is going to rely a lot more on individual plays to win out rounds.

Let's address the elephant in the room next. The biggest question mark around this new G2 roster will be its ability to find entries on the attacking side. Following the departure of JACKZ, who handled the entry duties for almost 4 years, there will be huge shoes to fill in the department. In the interview, XTQZZZ seemed to be sure of Hooxi’s capability to produce picks, but history says otherwise. In Copenhagen Flames, most of the burden was carried out by Fredrik "roeJ" Jørgensen who was an exceptional entry fragger. On the T-side throughout 2021, he accounted for almost 25% of entry attempts in which he found success in 49% of them. In the same year, JACKZ had 26.8% entry attempts while HooXi only had 20.4%. It is apparent that HooXi lacks the crisp aim and the mechanical skills of JACKZ. He will be the first guy jumping in to die more often than not. While he already stays low on the fragging department, this new role could make his stat sheet look worse and may reflect on his calling. Moreover, the fact that he is suddenly put to swim in the sea of tier one only adds weight to his shoulders. On the contrary, players like Kirill “Boombl4” Mikhailov and karrigan have carved out a completely different niche for IGLs. They are prime examples of a low fragging IGL can be the sacrificial lamb to create for the rest of the team to frag out.

Among the top 20 teams this year, G2 is the second best team in the world in terms of finding success in opening duels on the T-side. They have found a man advantage early on in 44% of attempted openings, second only to Outsider’s 44.6%. Additionally, their Bosnian star Nikola “NiKo” Kovač is the best player in the world with a 48.1% conversion rate in 25.2% attempts and a 1.06 opening kill rating to his name. So G2 doesn’t need to rely solely on HooXi to find entry kills. His sacrificial plays may present itself as a stepping stone for their stars to shine.

There has been evidence throughout history that even the most accomplished players sustained a drop in their performance after switching to a different language. In addition, it is the IGL who struggles the most with the transition from their native language to a foreign one.

As someone who spent his entire career playing in Danish teams like Mad Lions, Copenhagen Flames, x6tence, TOXIC, it will be a challenging task for HooXi to suddenly take the helm in English. In the latest interview by HLTV, he himself addressed his troubles. “Yeah, it's definitely a challenge, no doubt. Often my brain still operates in Danish, so if I think about something, I know what I want to say, but it takes some time to get out sometimes. That's obviously a problem, but I think with time it will be better. I already feel better now, speaking English 24/7, basically. It gets better day by day, but for sure a challenge at first”

The idea behind incorporating jks into the roster was to bolster their CT side. The team lacked a reliable anchor to hold down bombsites for the longest time, and jks is the perfect candidate for the job. When the Aussie stood in for FaZe at IEM Katowice 2022, he was the third highest rated player with a 1.35 rating to his name across 10 maps. Adding him to the roster will add a considerable amount of resistance on the defensive side. Presumably, he will be filling in for most of JACKZ’s anchor roles on most maps: A anchor on Ancient, B anchor on Dust2, A anchor on Mirage, B anchor on Vertigo. In HooXi's case, the roles might look different from what they were in the past. He may have to take A Long on Dust2, Cave on Ancient and will be asked to anchor B site on Mirage since his former roles conflict with that of Hunter. On Vertigo, he will take Aleksib’s role. It is possible that we will see some switchups on Inferno, because jks has experience both as a B anchor and as a Pit player. If not, Hooxi who plays the guy rotating from B may be asked to anchor the bombsite. Overpass, a map G2 haven’t played in 2 years will stay as their permanent ban.

In the wake of the jks signing, the perennial dilemma of having an effective lurker on the team has finally been put to rest for G2. He offers the team the option to have a player dedicated for the lurker role. It is his ability to adapt to the team's needs that makes him such an asset. We have all seen with FaZe and Robin “ropz” Kool how a potent lurker can radically revamp the strength of the T-side. The mid and late rounds are situations where he will be able to find a lot of impact, an element that was essentially absent formerly. However, even for someone as skilled as jks, results won’t pour out right away. As with anything new, getting used to the playstyle and strategies of a new team will take time. A lot of it will depend on how well XTQZZZ can make use of jks's talent, since he has been away from games for the most part of the year. Another upside of the change, Nemanja "huNter-" Kovač will now be able to join the main pack. In order to meet the needs of the team, he was forced into the lurking role. In a tweet, XTQZZZ acknowledged that it was not the best position for him.

Now not only will he be relieved of a role he didn't enjoy, but the change will also add some serious firepower to their attacks.

A clock on the campaign

Historically, the expectation to produce results has been the biggest enemy of large organisations like G2. It has been a while since they won an event, with DreamHack Masters Malmo being their last victory in 2017. And as a result, rosters have been ephemeral. The numerous overhauls in the past two years only goes on to show the eagerness of G2 to claim titles. In addition, the current G2 roster hasn’t come cheap. As specified by Aleksandar "kassad" Trifunović HLTV confirmed, the signing of NiKo cost a million, m0NESY cost $600k, jks cost $200k and huNter- and nexa were bought in for $400k. Consequently, it is not only the fans but also the organisation who put pressure on the players to perform well. As there are two new players including an IGL with a distinct vision, it might take time for the results to begin appearing. While the rationalisation of being a new roster may buy HooXi time to implement his new system, it will be worth noting just how much time the roster has before Carlos decides to pull the plug.