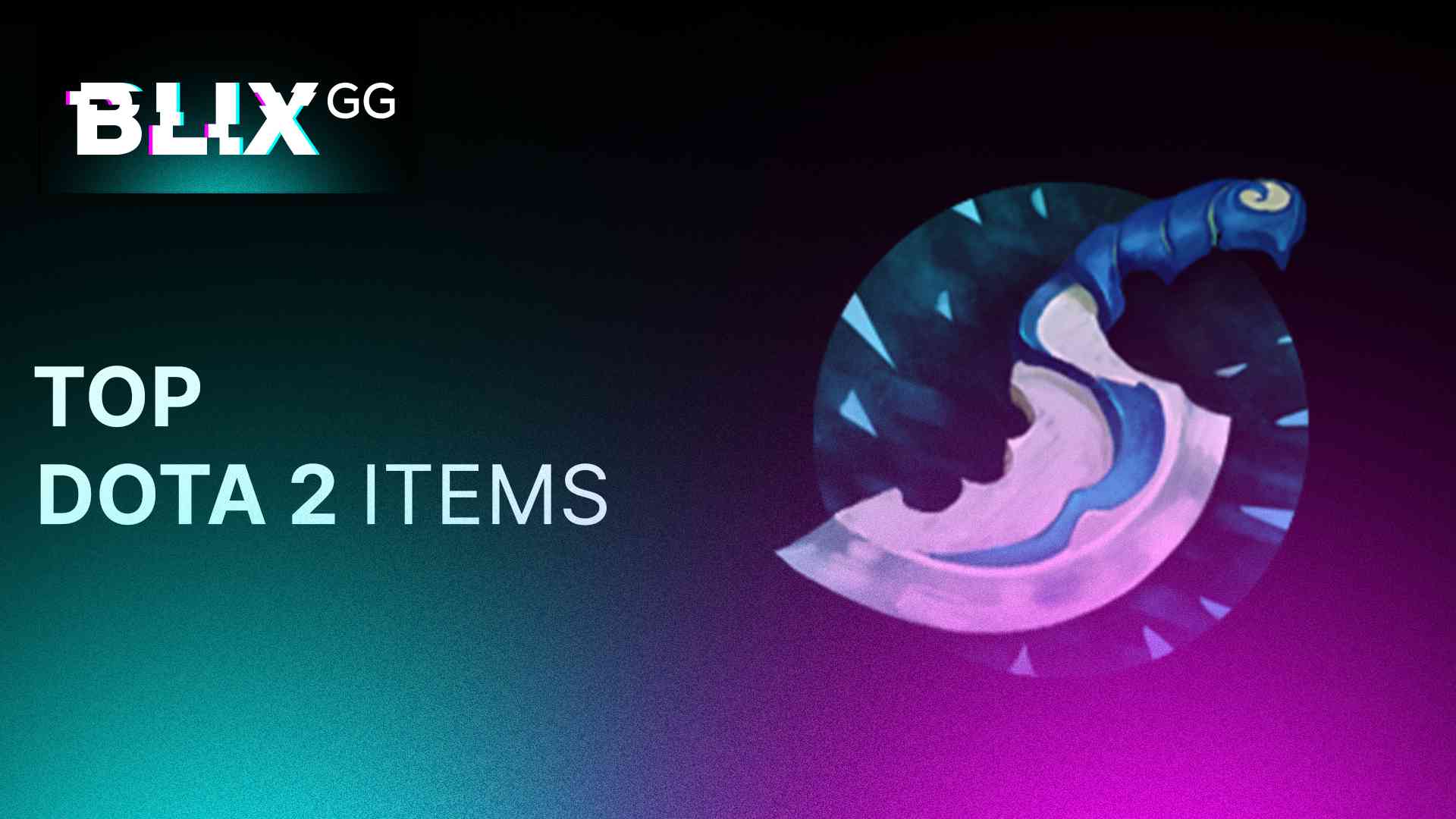 As one of the most popular MOBAs, Dota 2 has a reputation for its complexity. So, it probably doesn’t come as a surprise that items play an essential role in the game’s mechanics.

Interestingly, there are several types of Dota 2 items. The first group includes things heroes can purchase or discover while playing, whereas the other group is related to cosmetic items. The latter can be bought by players who want to customize their favorite hero or ability. These items don’t have any effect on the game itself. In other words, they won’t give heroes more damage or movement speed, attack speed, or any other stats.

One of the essential things we have to keep in mind when talking about the best items in Dota 2 is that it always comes down to the current patch. While it’s true some in-game items are always worth it, others are only popular during a specific meta. Consequently, it’s important to try to keep up with the latest trends if you want to utilize the most powerful items in the game.

With that being said, some in-game items are definitely more popular than others. That’s why certain heroes purchase them all the time, even if they’re not in the meta. There are many options we could put on this list, but we’ve narrowed it down to what we feel are some of the best and most reliable items.

Before we take a look at some of the more impressive items in Dota 2, there is one basic item that stands out. Magic Wand is an inexpensive item that allows the hero who purchased it to gain stacks for every spell used by the opponents. This item has a maximum of 20 charges, and each one grants 15 mana and 15 HP. Even though this might not seem like much, if you’re new to the game, this is definitely among the top purchases during the early game.

What makes Magic Wand so popular is that the item works well on numerous heroes. You don’t need to be a carry or a mid laner to purchase it — even support heroes can make use of it. In order to build this item, you’ll need to buy two Iron Branches, Magic Stick, and the Recipe. However, the build could change in the future, so always check how to get a specific item.

While it is true some Dota 2 heroes don’t require any items that provide movement speed (MS), most don’t belong in this category. Which means they need items like Power Treads to chase and run, depending on the situation.

Although there are several items that provide movement speed, Power Treads stands out thanks to its unique mechanics. Apart from MS, the item gives attack speed and strength (STR). Interestingly, you can switch the item to intelligence (INT) or agility (AGI), depending on the situation. This makes Power Treads an excellent option for heroes in every position, including supports.

To build them purchase Boots of Speed, Gloves of Haste, and Belt of Strength.

Besides Power Treads, there are a couple of additional items that provide movement speed; Phase Boots, Tranquil Boost, Arcane Boost, and Boots of Travel. Although the latter is the most expensive option, so it’s usually a late-game item.

Black King Bar is often the first or the second “big” item some heroes have to get. Although there are a couple of supports who can buy this item and make it work, Black King Bar is usually popular among mid laners and carries. It doesn’t provide a lot of stats and damage, but the item allows the hero to become immune to most spells. Needless to say, this makes BKB one of the best items in the game.

You’ll need to get an Ogre Axe, Mithril Hammer, and the recipe. While it's true that BKB isn’t the most expensive item in Dota 2, it still costs 4050 gold. This means for most heroes it’s a purchase for once the early game is over.

Blink Dagger is one of the most iconic items in Dota 2. Despite not providing any stats, Blink Dagger has the unique ability to allow a specific hero to blink to a new position. Although the item can’t be used for 3 seconds after receiving damage from Roshan and an enemy hero, it gives heroes the option to position themselves for a kill or escape from danger, depending on the situation.

Blink Dagger is a relatively inexpensive item, costing 2250 gold. Some heroes purchase it as soon as possible, whereas others wait until they have a couple of additional items to make the most of it. Regardless of when it’s picked up, Blink Dagger usually plays an important role for heroes, such as Tinker, Enigma, Magnus, and more.

Old-school Dota 2 players probably remember when this item was only available for a couple of heroes. However, after several new patches, Valve decided to allow almost every hero in the game to purchase it and receive some kind of a spell upgrade. Aghanim’s Scepter is an item used by heroes who want to receive an additional ability or make one of their available ones more dangerous.

Usually, Aghanim’s Scepter enhances a given hero’s ultimate, but this isn’t always the case. If you’re unsure whether getting this item is worth it, read the benefits it will give you before purchasing it. If you want to put it to the test buy yourself an Ogre Axe, Blades of Alacrity, Staff of Wizardy, and Point Booster. The complete item costs 4200 gold, which is why most heroes purchase it during the mid game.

Despite the fact that some heroes in Dota 2 have a reliable escape mechanism, this isn’t the case for everyone. Thankfully, some items provide a way for heroes to escape from danger or catch their opponents. Besides Blink Dagger, a second popular item in this category is Force Staff. Its different from Blink Dagger because it can be used even if the hero takes damage. However, instead of blinking away, it pushes the hero towards the direction it is facing. This does make it more difficult to use, especially in tricky situations.

But, what makes Force Staff one of the best Dota 2 items for many players is the fact it’s fairly cheap. Those who want to get it need to purchase Staff of Wizardy, Fluffy Hat, and the recipe. The complete item costs 2200 gold; which is why many support heroes get it as their first big item.

It’s important to point out that Force Staff is a part of an item known as Hurricane Pike. The latter is a popular option too, because it allows heroes to escape from danger as well as do a lot of damage in the couple of seconds following their escape.

Another item that’s popular among support and core heroes. Eul’s Scepter of Divinity grants intelligence, mana regen, and movement speed; which is why many heroes use it as a part of their item progression. You’ll need to purchase Staff of Wizardy, Void Stone, Wind Lace, and the recipe to get this item. Similar to Force Staff, Eul’s is upgradable to Wind Waker.

While it’s true this item doesn’t provide the best stats in the game, it allows heroes to cast a cyclone on themselves or any enemy unit. During that time, the target is invulnerable to damage. So aside from providing opportunities to escape, it can also help control a carry hero during a team fight.

The last item we’d like to include is Silver Edge. An item which allows heroes to both become invisible and do more damage on their next attack. What sets this item apart from Shadow Blade (which is one of the items needed to build a Silver Edge) is the fact that it disables the enemy’s passive abilities for four seconds. This makes it ideal against heroes who rely on those abilities to do damage.

In addition to the item’s effect and the bonus damage, Silver Edge also increases the hero’s movement speed and allows them to move through units while it is active. Allowing heroes to position themselves and make the most out of their abilities.

Silver Edge is one of the most impressive Dota 2 items. To build it you’ll need to buy a Shadow Balde, Crystalys, and a recipe. For a total cost of 5450 gold, it’s among the most expensive items in the game.

You'll find more tips and guides, plus all the latest Dota 2 news here on blix.gg.