Trymbi: “About First Strike [on Jarvan IV], I told Malrang it seems troll but then he just said that it's good… I don't really care what he picks because he makes it work.” 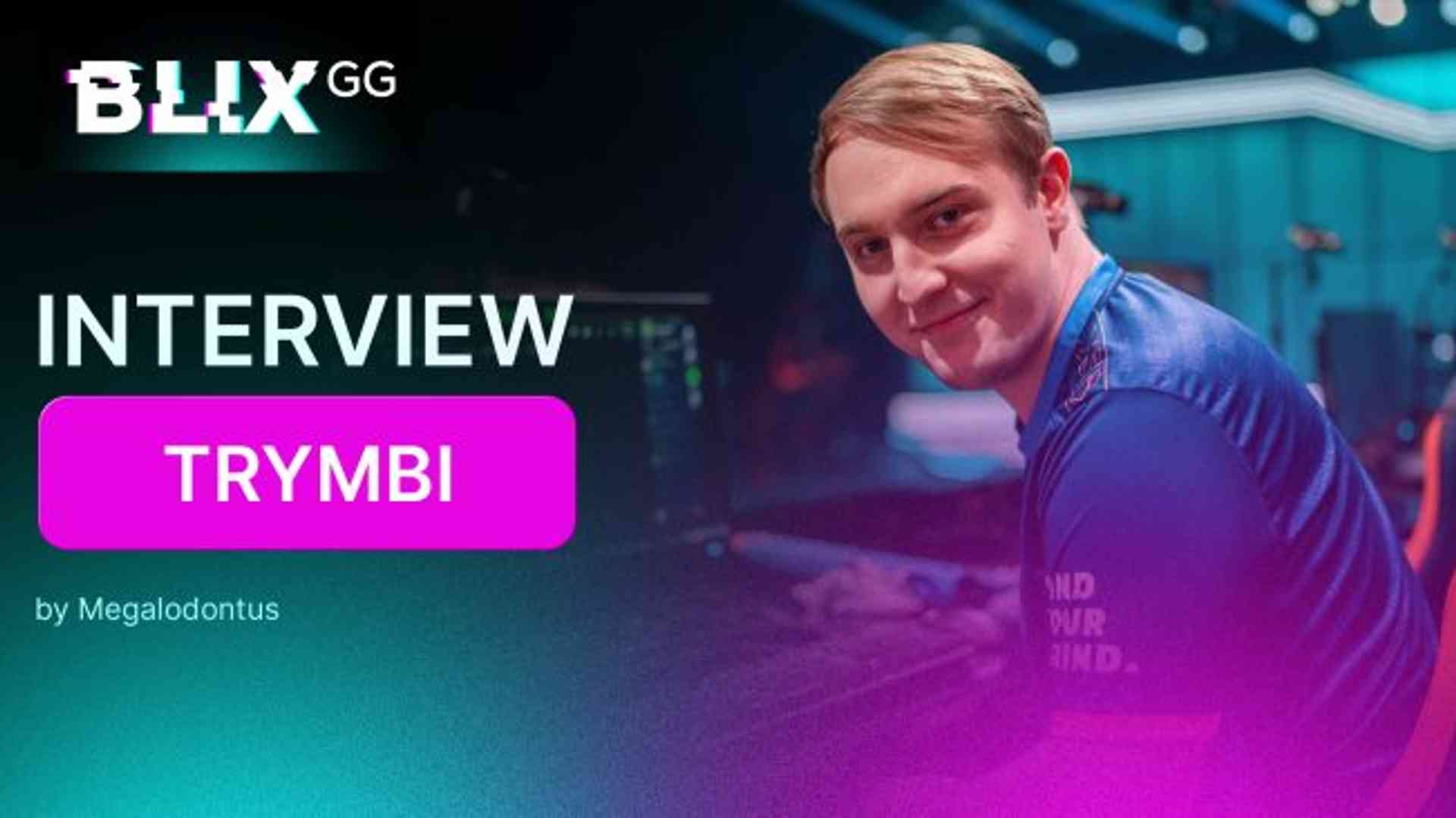 On March 25, the LEC 2022 spring playoffs officially began. Rogue and Misfits Gaming were the first ones to take the stage, and Rogue walked away the clear victor with a 3-1 victory over the opponents. Rogue will now move on to face Fnatic while Misfits have another chance in the Lower Bracket.

Support Adrian "Trymbi" Trybus sat down with BLIX.GG after Rogue’s victory to talk about his thoughts on the series; as well as Kim "Malrang" Geun-seong’s Jarvan IV set up, how the team is progressing and some thoughts on playoffs.

Congratulations on the 3-1 victory! What are your thoughts on the series overall and did it meet your expectations?

Trymbi: I think the series was alright. I mean… I somehow have high expectations even though I don't want to. But yeah, the series was fine. I think we played and did a lot of good stuff and overall everyone was doing their job, but I guess the Game 3 kind of made me feel not too great about the series.

Every game that we played today was really easy to execute and we should have stomped every single one of those games. Sometimes it was messier than it should be but it happens. Our Game 3 was kind of like this, where the game should be over but a lot of bad stuff happened and the game didn’t go our way. But it's fine.

For other games, we did our best and we showed a good performance overall. I think that a lot of people stepped up and it was a really enjoyable experience. We made a lot of good plays together overall and we played well.

Emil "Larssen" Larsson also mentioned on the Post Game Lobby that the games were a bit ‘weird’ and Misfits ‘ran it a bit’. Explain a little bit about your preparations going into the series against Misfits.

Trymbi: We prepared around what they usually play and how they like to play, and it was really easy to see how they wanted to play and they didn't really change much. The way Misfits like to play is that they like to group on two lanes and stuff, it's something that they love to do. For example, in Game 1, we could clearly see from Larssen’s level, experience and CS wise that they ever grouped too much so he had free side lanes to take. That was something that we expected and happened, and we could make use of that.

It’s not something bad about Misfits or anything, we respected them and I think they think they adapted throughout the series and played better afterwards. Misfits are the kind of team that have good preparation and they're able to adapt, so I don't think they played badly.

I would also add that it’s not like we truly prepared for everything or every possibility against them, it was us casually playing our game. I don't think it matters who we play in the end, because you just need to play your game. It should work if you play well versus whoever we play. The preparations were not extremely extensive because we knew whatever they are good at and how to deal with it and there's nothing that surprised us.

A last point on the series; it was very surprising to see Malrang prioritise Jarvan IV so much, but he also picked it with First Strike and he played with Turbo Chemtank and Zhonya's Hourglass. Do you know the decision making behind this?

Trymbi: About First Strike, I told him it seems troll but then he just said that it's good. The tree is very nice, overall, and he has Precision secondary. He has free tenacity so I'm fine with it. I can understand why he picks it and I don't really care what he picks because he makes it work.

On the itemisation, I personally think it's good though I personally would rather him get a Sunfire Aegis if he wants to play like this, but I do understand why he goes for this route. Junglers generally don't get as much gold as laners so it's fine to go for the cheaper option which is Chemtank. For Zhonyas, I think it doesn’t matter too much.

Jarvan is the kind of champion where it's probably better to go Zhonya’s than Guardian Angel. Why would you go GA? You’re probably dead anyways and Zhonyas can actually buy time. Jarvan also scales a bit with AP, so I think it was pretty good itemisation for him even though it seems troll at first.

I would say I don't know too much about the role and I never asked him why because I believe that if he thinks it's good, then I have no right to contest it unless I believe it's really troll. When I pointed it out, he convinced me otherwise. I believe him and I'm not gonna make him play different items or runes if he truly believes that it's better. Maybe it isn’t good but if he feels better about it, I believe he'll play better and he'll have a better understanding of what he can do.

Trust seems to be a big theme of Rogue's season, it's been mentioned before by Larssen and yourself. How do you see the team now compared to the earlier weeks of the season? How has Rogue been progressing?

Trymbi: I think at first the trajectory was only going up so there was nothing really to really worry about or doubt. Coming into later stages of the season, obviously, we had our ups and downs and for the three weeks that we had, I think there are more downs than ups. That was something that we have had to deal with and it's always stressful.

I don't think we are at this level and we’re getting to understand each other more and more right now, but I do believe there's a lot of trust in this team. I had a little bit less trust throughout the first few weeks, even though I like everybody. I think last year’s experience made me realise that I'm the kind of guy that always gives my full trust to people and I was doing it for a long time.

I’ve had my ups and downs with it and I felt last year I had quite a lot of downs that was due to me being too trusting, so I just kind of stopped myself from doing it too much this year. That's why maybe it was a bit harder for me to fully trust other players. I won’t say I fully trust everybody, but whenever it's needed, I will give that trust.

I think other players are very trustworthy and they're doing their best to make things work. There’s better chemistry all round and it's also much more relaxed compared to last year. I think last year, there was a bit too much tryharding. It’s not like there isn’t any this year, but it does feel like there's more room for you, so it's just easier to focus and easier to understand what to do.

For example, Andrei "Odoamne" Pascu streams more now because he just has time to just peace out, go to his apartment and just chill. No one will tell him to stay in the office and play as many games as possible. I think people trust each other in that sense that you're not gonna int your schedule and stuff. I believe we have a lot of trust in the team, to answer your question, and we're making it work.

Here’s a very fun question then, on trust; if you're bot lane partner Markos "Comp" Stamkopoulos locked in say…Yuumi AD carry, would you trust him? He says it's really good!

Trymbi: I mean, I'll tell him it’s shit, but I'll pick a champion to make it work. I don't really mind. I have enough knowledge and enough mechanics to compensate so if I get enough time and resources, I can make it work.

Nice answer! You guys play the winner of the Fnatic and G2 Esports match. What do you expect from that series and who do you prefer to face?

Trymbi: I believe Fnatic will win it but I don't really care who wins because at the end of the day, we need to win against everyone we face. I would like to be the best prepared for this playoffs so I would like to just face the team that will be better.

Let’s try to make you care a little bit, because my next question is going to be a hypothetical one. Let’s say Rogue made the LEC finals, who do you think would be your opponent in the finals?

Trymbi: Well, if I have to choose…I'd say probably Fnatic or Team Vitality. But it's hard to judge because it's not like we play fully versus everybody in scrims and stuff, and I do think that it can be any team. It can be Excel Esports, G2 and even Misfits.

I just think Fnatic, from their performances in the regular season, look like a really solid team. There's still room for things to happen and I think any team can go up or down, and now it's about who has prepared the best.

Trymbi: I’d like to say that from my own expectations, I don’t think I played well in this series. Even though I did make some good plays, I still messed up on a number of things. I was not as comfortable as I usually am and obviously it was our first best-of-five, but I want to make sure that for our next series, you're gonna see how we actually play at full force or at least, how I usually play in scrims.

I'd like to show people that I'm not the worst support currently because there are still people out there thinking that. I can say I don't really care but on the other hand, my goal when I play is to make sure that I entertain people every single game. I want to say thanks to the people watching and I want to make sure things work out for the next series and overall for playoffs.

Thank you Trymbi and best of luck against Fnatic. You can catch their match on April 2 on the LEC’s