Tuscan is finally back! Well, sort of… Valve has officially added de_tuscan to the game after the map’s original creator, “Brute” partnered up with popular map creator “catfood” to bring the Counter-Strike 1.6 classic up to Global Offensive standards. The project has been well over a year in the making, and while you can now play it in matchmaking, it’s yet to be added to the Active Duty map pool, which means we won’t be seeing it in professional play quite yet.

That said, professional players have requested the map’s additions for years, citing it as a proven and tested map. But how true is that today? There’s no denying Tuscan’s significance in 1.6 and even Source, which it was later ported to, but CS:GO is a very different game, especially in 2022. With so many people speculating that Tuscan might be added following the IEM Rio Major 2022, how would it hold out in the current era of Counter-Strike?

Before we dive in, it’s worth mentioning that only a tiny portion of players will be looking at the new Tuscan with any form of nostalgia. Out of the current 150 players in HLTV’s Top 30 teams, only 10 (6.66%) have professional/semi-professional CS 1.6/Source experience. This means that Tuscan will have a lot to prove, given that it’s showcasing itself to a new audience and that very few active pros will be looking at it through rose-tinted glasses.

Below you could find Tuscan callouts. 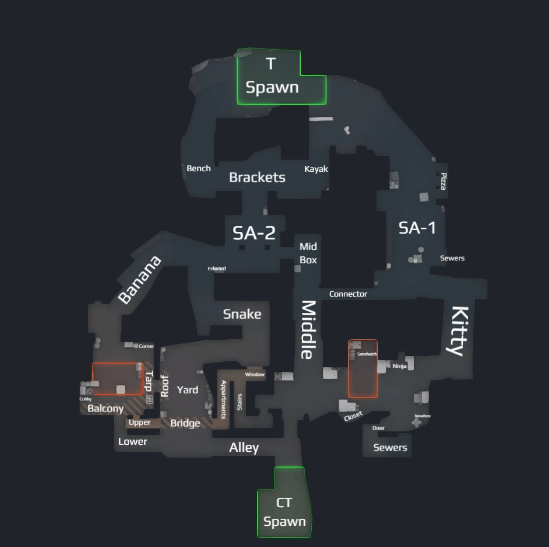 Now, onto the map itself! For the Tuscan veterans among you, you’ll notice some significant changes in the map’s aesthetic. Still, like all catfood maps (shoutout to de_tulip, great map), the modern version is gorgeous! The layout hasn’t really changed much; the iconic paths of Kitty and Snake remain, Bridge still connects Upper and Apartments, and A site still has plenty of cubbies to hide in. The main differences come from T Spawn, which is now a very open plaza by the seaside, and SA-1, which no longer has fences but still provides ample cover with various boxes and barrels. A few areas have been widened compared to the 1.6 version to accommodate CS:GO’s addition of incendiary grenades, but if you were familiar with the previous iterations of Tuscan, chances are you’ll feel right at home.

It’s always hard to say how a new map will play, especially as the tiniest update can significantly change the meta. But with how things currently stand, it’s fair to say that Tuscan CS:GO will be incredibly CT-sided. The defensive side has very favorable timings nearly everywhere on the map; CTs can reach Connector before Ts reach Mid Box, they reach the corner of Snake under Window around the time the Ts reach Edward, they reach the top of Banana before the Ts reach the bottom, etc. As it turns out, the only favorable timing for Ts is Kitty, which they reach just a few seconds before CTs do, and it’s straightforward to throw flashbangs over the arch to blind the opponents. With that in mind, Ts will need to play passively to punish any overly aggressive CTs at the start of the round. There’s also the aspect of rotations. Given that the CTs can easily take control of Banana, Snake, and Middle due to the spawn timings, they can pretty effectively cut off the main avenues into the sites. Sure, the Ts have slightly favorable timings with Kitty, but one well-timed pop flash can give the CTs a straightforward fight, and they can just smoke or molly off the entrance. The attacking side could probably take control of Sewers quite quickly, as it’s improbable teams will devote a player to holding it in pro play. Still, it’s such a long route that you’re unlikely to see much action in there other than the odd lurker or pistol round pop through the door.

Ts can only reliably take SA-1 and SA-2, but that doesn’t give them many rotation options, given that they’d have to walk back to T spawn if they don’t have control over Middle. In comparison, the CTs can easily rotate between the two bombsites through Alley and Stairs/Window/Apartments. But that short rotation power through Window will likely also be the CTs’ biggest weakness. Most teams will try to establish Window and Yard control on their T sides, as Mid doesn’t serve a purpose given that it’s just one big ramp full of unfavorable duels. If the Ts can boost someone into Window, then that player has a lot of freedom in cutting off rotations between the bombsites, and the Ts can easily split either site. Think of it as sort of like boosting a player into Window on Mirage, where they can easily catch rotations through CT and Mid and backstab players on the retake.

The skybox on Tuscan is fairly open, which is great as it allows teams to throw utility from a wide range of places, but many of the map’s buildings and castles are pretty tall, so that also somewhat limits what Ts can throw on an execute. Here are a few nades that may become standard on the map. 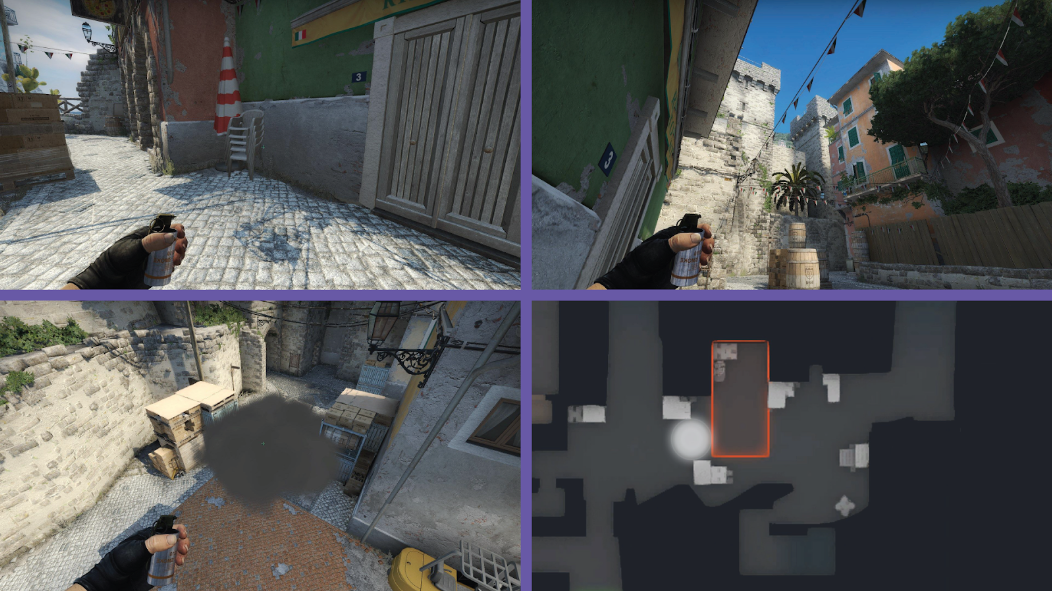 The main smoke you’ll likely see for A executes should look like this. It’ll cut off the sightline from anyone rotating through Alley and Stairs and give the Ts some time to molly and clear out all of the nooks and crannies on A site. Teams will likely find a few different lineups for this smoke, but for the most part, it’ll likely be jump-thrown from SA-1. 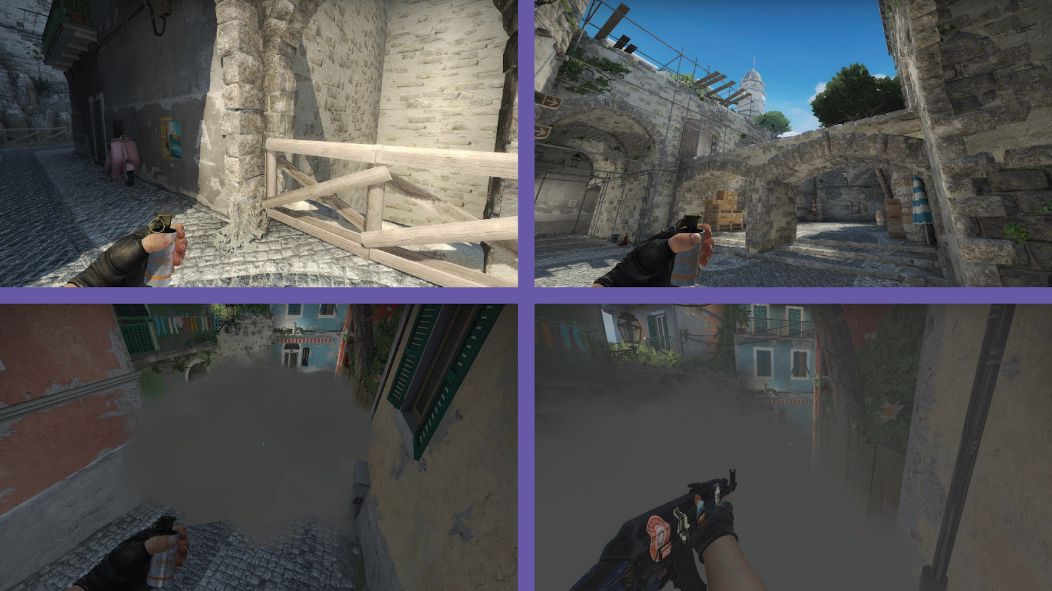 Another powerful smoke that will likely see a lot of action is this one-way on Banana that the CTs can jump-throw from Alley when heading towards the B site. Like with any one-way smoke, the Ts will likely start spamming it once they see it, but the fact that the CTs can smoke off deep Banana while essentially coming out of spawn on top of already having the favorable spawn timings, Ts are going to have a hard time rushing B. 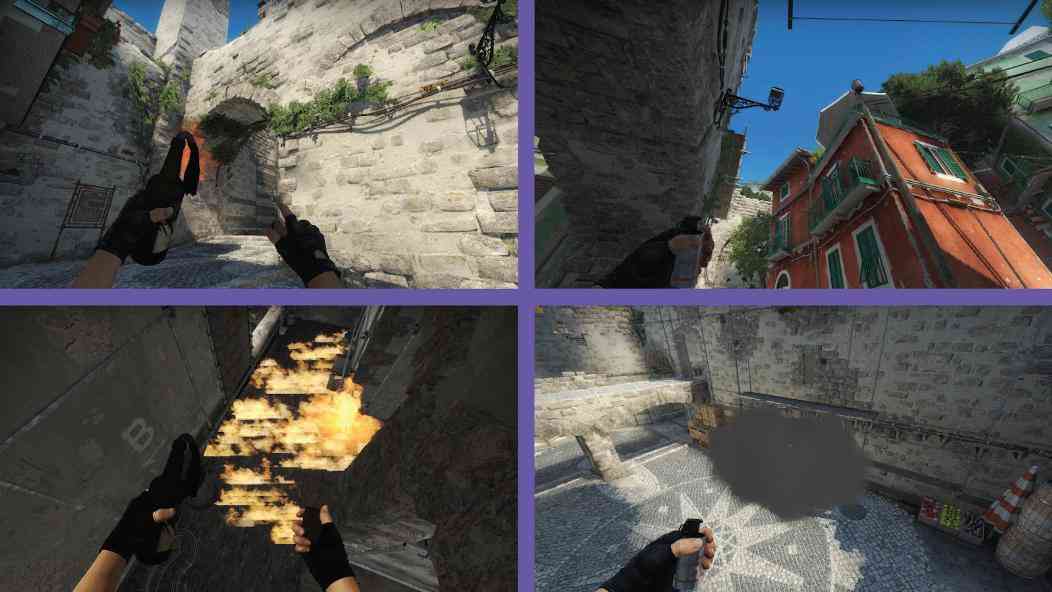 When fighting for control towards Snake and Yard, Ts will likely want to molly out Window, and if thrown correctly, it should burn any defending CT player towards Apps or Stairs. It’d also be good to pair that molly with this smoke towards Tarp, which should cut off the vision from the B defenders when taking Snake and Yard control. With these nades, you should be able to apply a lot of pressure onto the CTs, and you can either boost someone through the Window, send a player through Yard to solo-boost on Bridge, and backstab the CT if their attention is still on Window, etc. There are many options, but these nades will likely be imperative to get a lurker into a good position and cut off rotations. 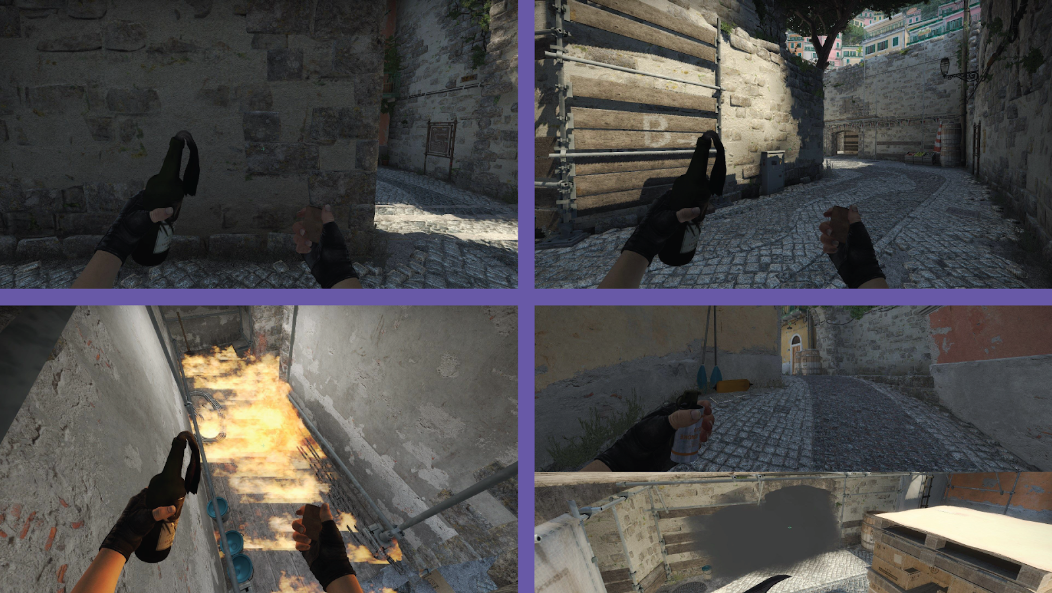 When it comes to hitting B site as the Ts, the executes will be pretty simple given that there are not a lot of avenues of entry. There’s not much of a point in smoking off the sides of the Default box, given that CTs can be on Balcony, on top of the Cubby box, etc. The most common smoke will likely just be towards Lower, which can be thrown by aiming at the lamp on the yellow wall while walking up Banana. If Tarp is smoked off like shown in the previous set of nades, a T in Snake can also safely molly Upper with a jump-throw. Pair that with a lot of flashes thrown over the site from Banana or Yard, and you’ve got a reasonably simple execute to take B, which isn’t too different from what you’d see on B site Cache.

While the map is excellent, there are still a few things to point out. My main critique is that the map feels like it was designed to be played on 128 tick, as a lot of fairly standard jumps onto barrels and boxes feel very smooth but also incredibly tight. On 64 tick, these jumps turn into crouch jumps or are just a little harder to pull off, and in the heat of battle, this may become a problem. While third-party platforms and tournament organizers all use 128-tick servers, Valve’s matchmaking is still on 64-tick, and that’ll be a lot of people’s first introduction to the map. I’m not quite sure what could be done to fix this, maybe it is just a case of slightly reducing the size of certain crates and barrels, but then there might still be issues with climbing to other places like Bridge in Yard or Balc on B. 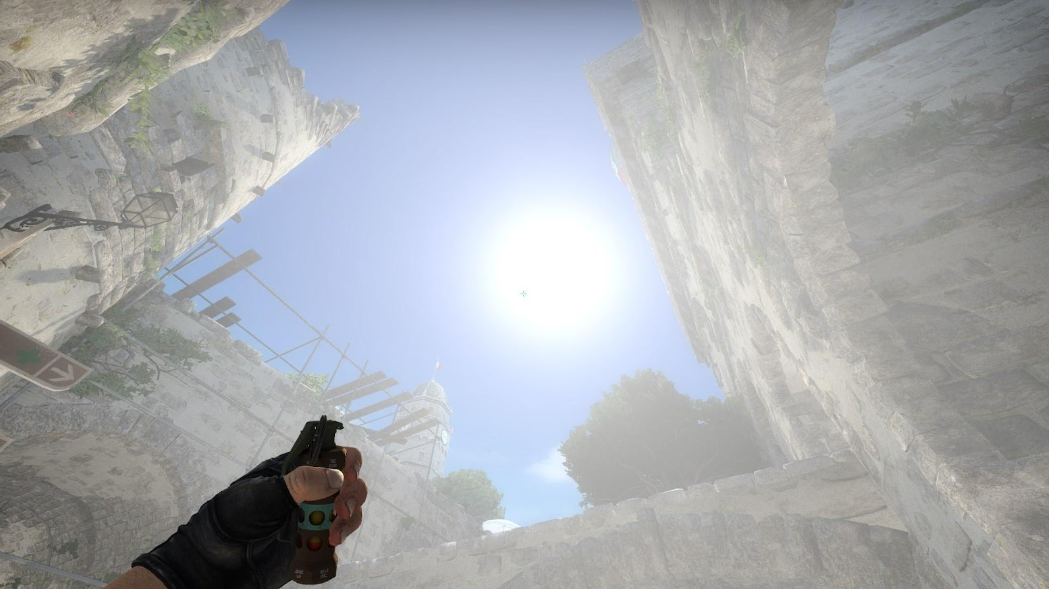 Another slight annoyance is that the sun is incredibly bright; Tuscan is set in a warm and sunny seaside town in Italy, and in many instances, the sun is hidden behind the map’s tall buildings and castles, so it’s not a huge issue. Still, there are times when looking up is very blinding. For instance, CTs will likely want to throw retake utility on B from Alley and Yard, but if you’re trying to line up a specific flash or smoke, you may have difficulty finding your waypoints. Outside of a few texture/clipping issues, these are my two main grievances with the map.

Tuscan will have a place in pro play when you boil it down, but it’ll likely change things up in the pool quite a bit. With CTs having such advantageous spawn timings, Ts will have to play slower than on PUG maps like Mirage. The early game will likely consist of early map control by the CTs, followed by the Ts throwing their utility to retake the avenues and eventually executing on the site, like what you’d see on Vertigo. The main difference between the two maps is that while Ts need to be silent while doing so, they have much better rotations than Tuscan. With so many corners, off-angles, and elevated positions on both bomb sites, it won’t be easy. They’ll require sharp aim and coordination to clear everything, especially as you can’t molly every position. Tuscan is the type of map that will need great and decisive calls from spawn due to the poor T rotations, but it’ll also be great for lurkers as there are a lot of opportunities to catch out people around Yard or on the extremities. 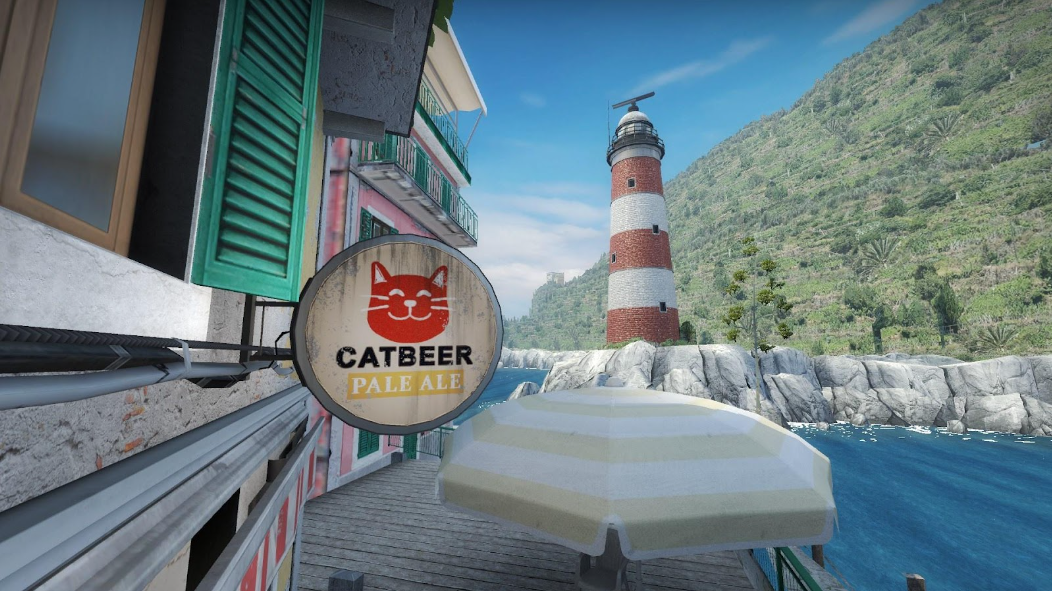 Whether or not Tuscan actually gets added to the Active Duty map pool remains to be seen, but with the Rio Major just around the corner, it’s definitely not impossible. Maybe Valve wants to test the community’s reaction to the map through the 10-year CS:GO anniversary update, and Valve could then make a few adjustments to balance things out a bit. Maybe the fact that it feels like it was designed for 128 tick is because it was, and Valve has more surprises post-Major! Who knows? Then there’s also the question of which map Tuscan should replace, but that’s a separate discussion.