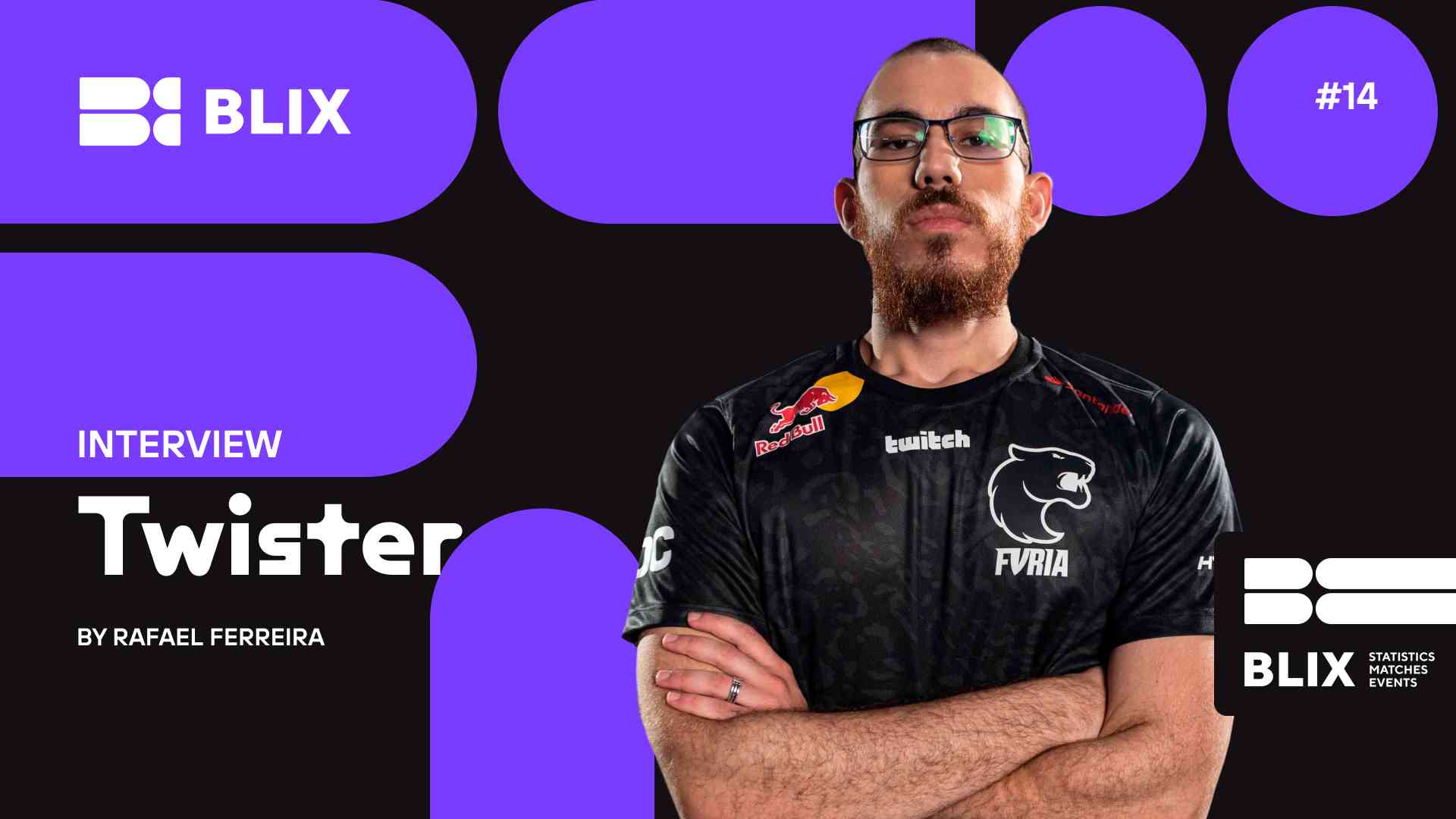 After two years in the Brazilian organization, Marlon “Twister” Mello and FURIA parted ways. BLIX.GG talked with the Brazilian coach about his exit from FURIA, his experience in the team, and the future.

“I think during my time in FURIA, I defined some goals for the team but one of them we didn’t achieve, which was the team to reach an international final. The goal was not to win it because that requires more time and other things but at least reaching it.”

“We wanted to settle in the top 4 of Brazil, attend all the international competitions, and reach the top 10 of best teams in the world, and we were able to do it. The only thing that missed was that international final.”

“I see FURIA as one of the best teams in the scenario because they can defend that Brazilian honor, that Brazilian fight spirit because, during my time in FURIA, I and the kids did our best with always a huge will to win. I think after these two years of work, I was able to put the people with that spirit which will represent that will to win very well.”

“That link ended up because of a divergence of ideas. I and the players had different ideas. They chose in the majority order to keep the roster without me. The feeling (to leave FURIA) isn’t good because it is very hard to start a project from zero.”

“The FURIA project was like you had a soon, and you help him in all the life stages.”

“Of course, my work was not done alone. I had a lot of people helping me, the staff, and the players themselves. Though, it’s still frustrating for me to quit that suddenly.”

Twister joined the Mexican Team and ALPHA Team immediately after leaving FURIA. The Brazilian coach explained the why behind this decision.

“They invited me as an experience for me, and as I wasn't working after the FURIA exit and with the transfer window closed, I didn't have any source of income. In that way, they helped me in this moment, and in exchange for that, I’ll share my experience and my knowledge.”

“I joined officially as an assistant coach, but I’m more like a counselor. I’m sharing with them some tools that the players at the high-level use, trying to bring them to a level closer to the Brazilian. For me, that’s the hardest competition in the world (BR6). It’s very unpredictable the league rankings. It will require a lot of time and work for the team to face in the eyes of the Brazilian teams, but I hope I help them to achieve that.“

“Alpha is a very receptive team; all the players have a good mentality to be athletes.”

“They used to play in a playstyle very different from what I’m used to, so I’m trying to put them closer to my idea. Essentially to set them more prepared for the high-tier matches. So far, the results are great because they are very receptive, as I said.”

“In my concept, joining a team from the “zero” would be a risky play because I still don’t know how the teams will be and how the scene will be in the next years. Although I would still join that type of long-term project and put them in a high tier, it’s something that I’ve done before.”

“Besides that, I would like to have the experience to work with other coaches from the scene, accepting to be part of the staff with coaches that I respect in the scenario. In my next adventure, I’ll count a lot on who does the proposal and what they offer for me. Working with friends I made during this journey in Rainbow Six would bring me satisfaction and I think I would be able to add a lot to their work.”

BLIX.GG: You said in your TwitLonger, that I wouldn’t have a problem joining a non-Brazilian team. Would you accept a project like the Budega one, with him having some autonomy to build the team?

“Absolutely! To be honest, joining a project in Europe is my focus now, for me to get that different experience and to take the Brazilian game style to them. I would like North America or APAC as well. Would be great to share my vision with them and for me to work with players with other cultures and different mentalities.”

BLIX.GG: Do you have any favorite region to join?

“I didn’t think about that yet, but as I said, I have friends in those three regions that I would like to work with or face regularly in the season to also encourage and grow as a coach.”

More than a coach

In the TwitLonger saying goodbye to FURIA and sharing some information about him for the people interested in hiring him, Twister mentioned extra studies: graduation in Human Resources Management and a formation in sports psychology.

“When I joined FURIA, I understood that it required more for a coach to know more besides the game itself. To be honest, knowing the game is just 50% of the project. You had to understand about working with athletes, people with their own opinion and people with feelings.”

“I searched that graduation in my first year in FURIA to improve as a coach and in human management. I finished that graduation recently. The formation of sports psychology was done by a famous psychologist in Brazil, João Cozac and he taught a lot of techniques and tools for coaches and players to use to get better performances. Nowadays, with that knowledge, I can be a strategic coach, head coach, analyst, assistant coach or even a performance coach.”

Twister out, Julio in

As BLIX.GG reported Julio “Julio” Giacomelli, ex-NIP player, is the chosen to succeed Twister in coaching. Twister gave his thoughts about this move.

“Julio is my friend since the Black Dragons' times. Unfortunately, he exited NIP, I think he was still able to perform at a high level, but the team decided to part ways with him. Julio is a person that adapts very well to the situation.”

“He will have a great relationship with the people inside FURIA without a doubt. The players, with all the knowledge about the correct way to work, will guide Julio in what they need. For now, in the first moment, I think will be an adaptation for Julio with the players and then he can be more open to doing much more. He’s a world champion, I think he can add a lot to the team.”

“I want to say that I appreciate all the messages from the people that like me and my work and I’m not over yet! This is the dream that I have been living for the past five years and I still pretend to do it. If it is in Brazil great, if it’s outside Brazil great also. Competition is something magic, you have to enjoy it while you can, it’s insane the feeling and how it affects you.“