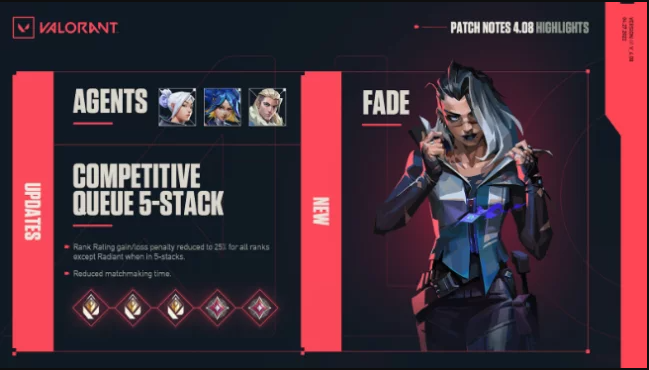 Since the release of VALORANT, multiple agents have been added to the game in order to give players more options in picking the perfect & most suitable agent based on their abilities to form the best team composition.

Finding the right composition relies on different factors such as; Type, Abilities, and most importantly, the agents’ state.

Riot Games often imply changes to different agents that result in nerfing or buffing; The changes happen for the sole reason of having a balanced agents pool.

The changes received heavy criticism from the community, especially for “Sova,” a new animation that would ruin some popular team line-ups (Sova’s left hand would cover the left side of the bottom HUD when equipping his bow).

Luckily, Riot Games answered by removing it from the Patch Notes 4.08.

“We’ve heard your concerns about Sova’s new animations disrupting lineups,” the devs shared on Twitter, “Based on that feedback, his animation changes will be removed from Patch 4.08.”

The agents’ changes don’t only affect the average players but also the professional ones.

At the highest level of competition, picking the right agent composition is as important as the duelist's impact in your ranked games, certainly excluding Reyna bottom fraggers.

The following table showcases the most picked agents during the current VCT 2022: 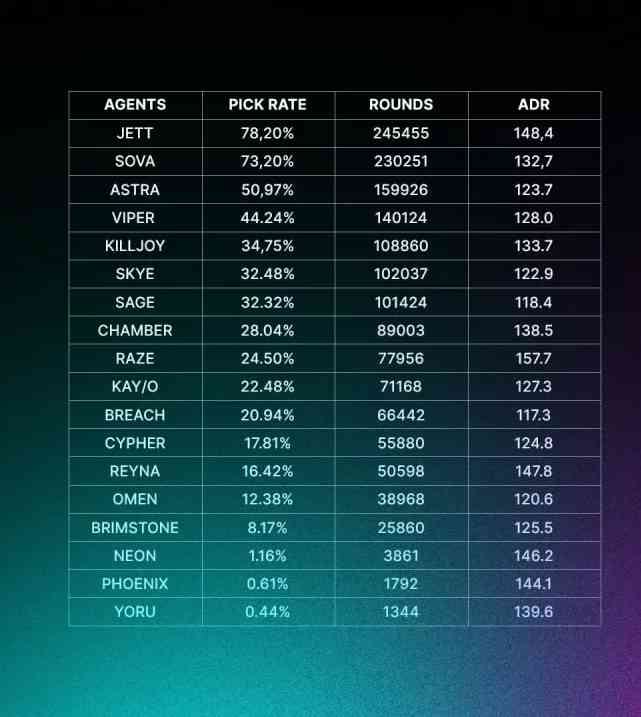 Stats credit: Thespike.gg.  These stats include all regions during the entirety of VCT 2022

Stats credit: Thespike.gg. These stats include all regions during the entirety of VCT 2022

From the top 10 most picked agents only 2 of them are duelists while 3 other duelists are sitting on the bottom of the table.

It appears to be a long hot summer in the VALORANT world since Neon’s lightning isn’t used that often; as a matter of fact, just when we thought she’d become meta with her incredible overpowered abilities, it went the complete opposite which made her flop.

With the latest Patch Notes, Neon is receiving changes that are considered a nerf & buff simultaneously, but the question is whether she’ll finally see the light and climb the pick rate ladder to become a prime duelist.

Yoru’s situation is as complicated as playing Astra for the first time. Even though he received a full rework that was supposed to make him a better agent, the reality was far away from that.

The agent is still struggling, and players couldn’t find a sweet spot to make a good agent composition around him that would work. After the rework, the abilities have improved, and he's a self-sufficient agent, but I guess why to pick him when you already have better options for a better agent composition.

Unlike Neon & Yoru, Phoenix’s issue is in himself as if all the other agents gained superpowers and he just stayed “Phoenix.” With how other agents received different changes that made them better and more sufficient in addition to new agents releasing, the firebender seems powerless around them, which had the community calling for a rework.

It's as if Phoenix is under KAY/O’s ultimate ability and has no choice but to be powerless, and the only way out is by waiting till Riot Games takes action.

Masters Reykjavík is a prime example of how Phoenix’s situation isn’t going to get any better unless something is done. Phoenix is the only agent that hasn’t been picked during the entire event. 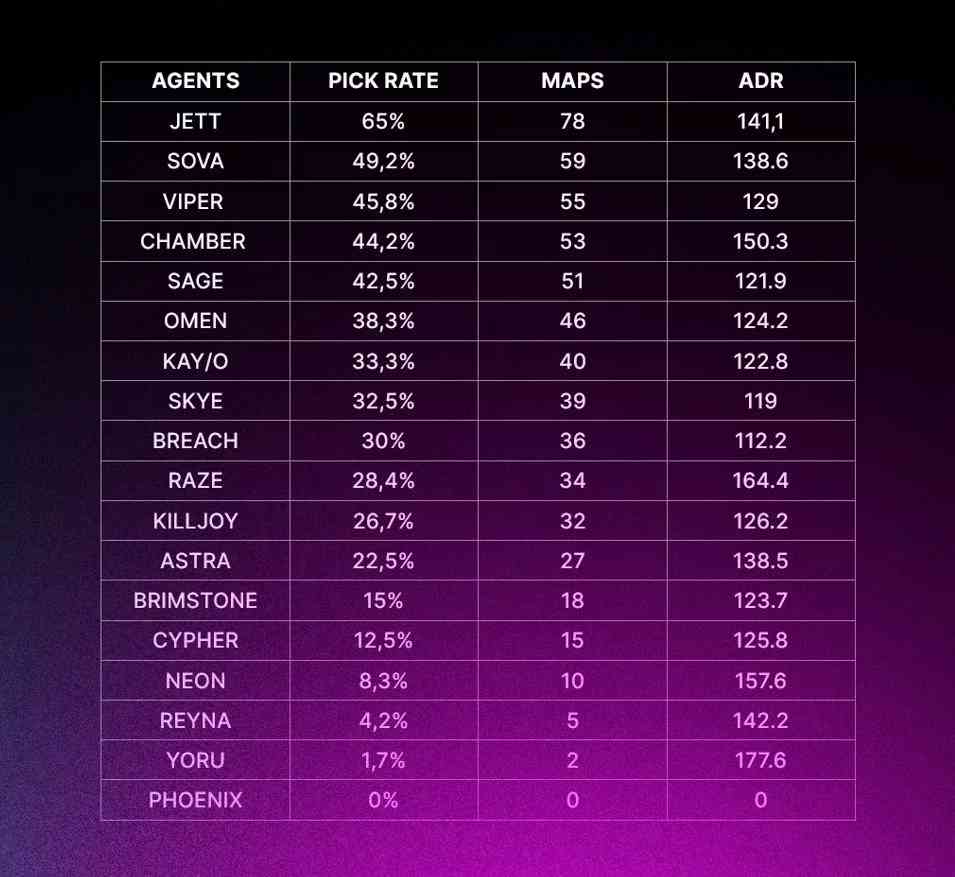 There are some notable changes in the pick rates between the two VCTs; These changes occur depending on the agents’ state such as buffs, nerfs and the addition of new agents.

Another factor that could explain the changes is the “map pool,” as not every agent can be played on all maps.

The following side-by-side comparison between the map pool shows a significant difference between the two VCTs. 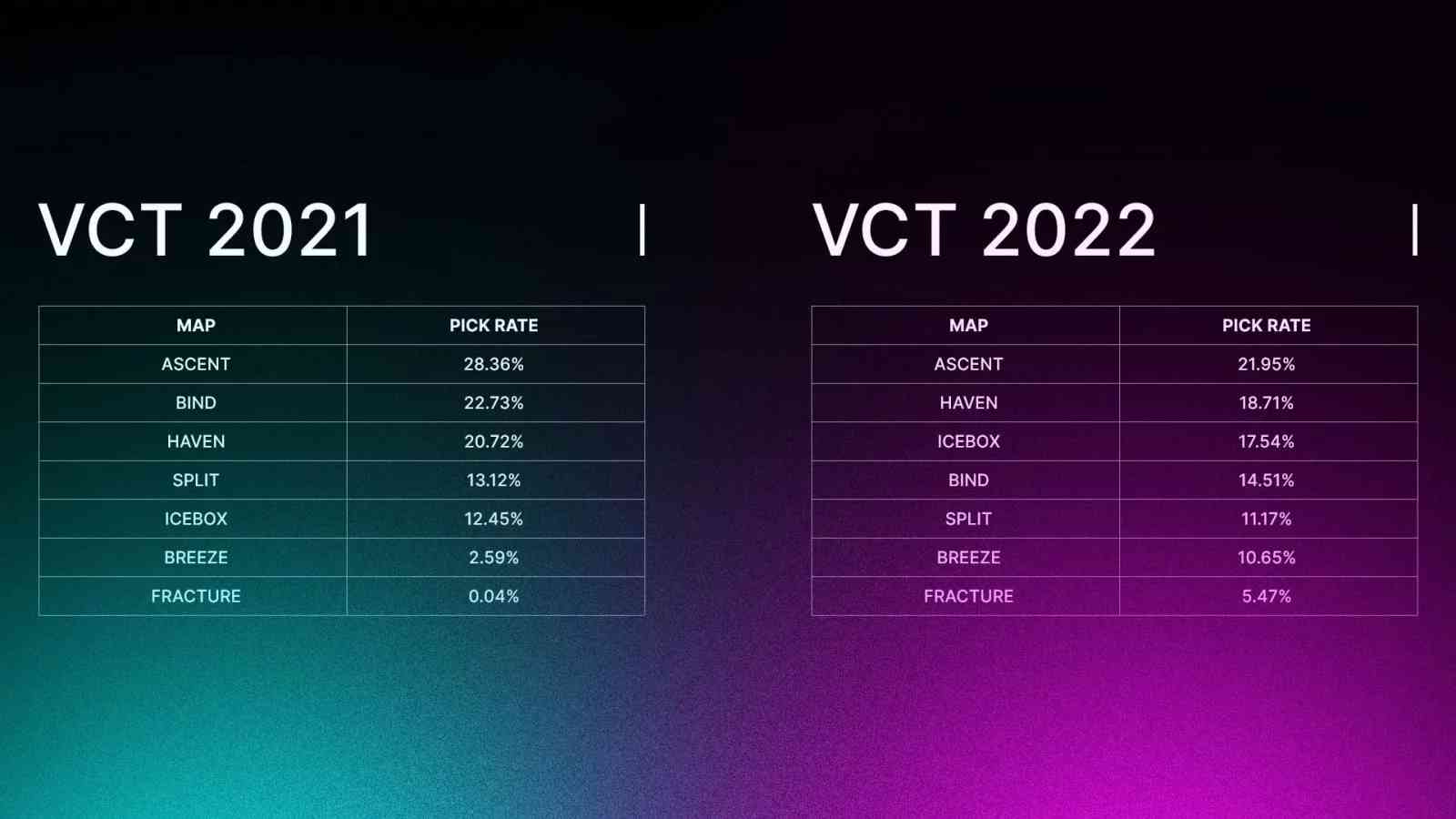 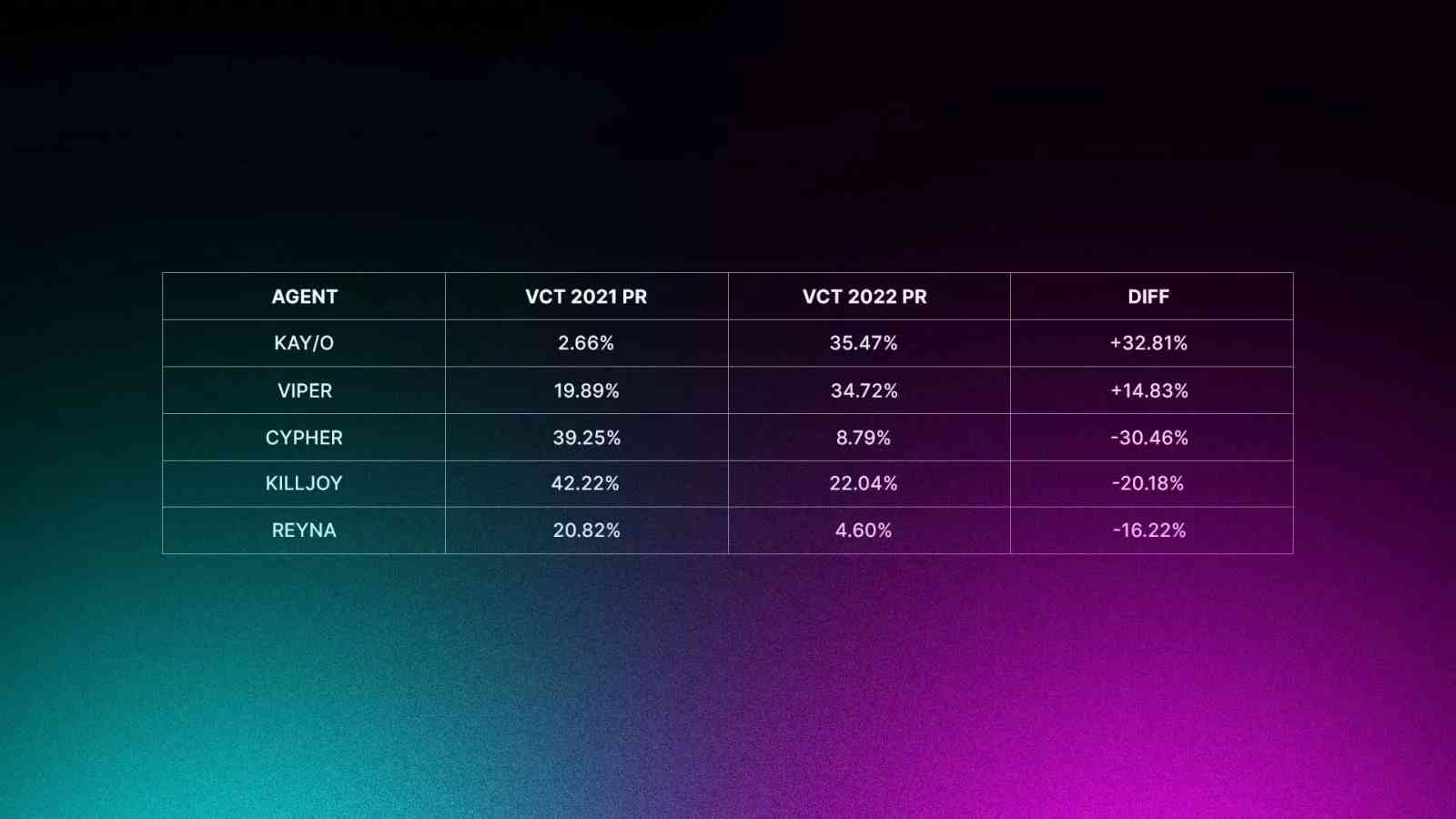 If we could travel with a time machine to the future, more changes will definitely happen as VALORANT is liquid and takes different forms with each update such as the addition of the latest agent “Fade”.

“Fade” seems like a promising agent with a bright future, a mix of Sova, Skye and Breach should be tempting for teams and players to start using her in their compositions as it might not be an overpowerful duelist but an incredible support that can win games.

But since we can’t travel to the future, we’ll just sit tight and see what Riot has for us in the future and what the pick rates look like by the end of VCT 2022.